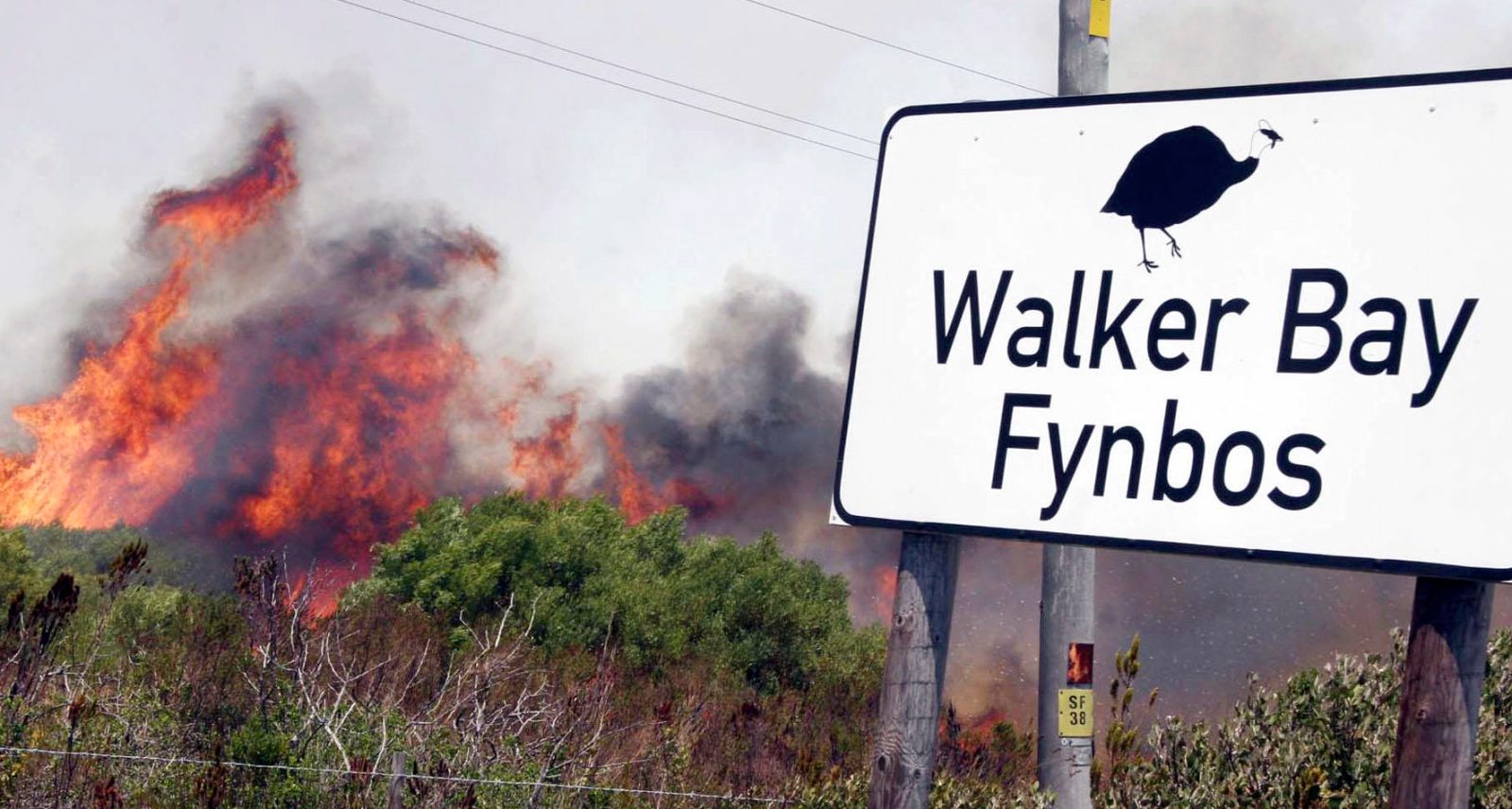 The ‘Cape Floral Kingdom’ is home to thousands of plants unique to South Africa, and while fynbos thrives after fire, ecologists feel there are vital lessons to be learnt from the flames.

Ecologists have divided our planet into six distinct floral kingdoms, which are “areas of the world recognised by plant geographers for their distinctive plant life”, according to Britannica.

“The Cape Floristic Region, and the Cape Floral Kingdom are both terms that cover more or less the same area. These areas include all of the fynbos, and other vegetation types such as renosterveld (mostly destroyed now), strandveld (narrow stretch along the coast), and small patches of Afro-montane forest.

“It is also a moving target, as people discover new species and make subtle changes to the boundaries,” notes Professor Brian van Wilgen, ecologist and Emeritus Professor from the Centre for Invasion Biology at Stellenbosch University.

South Africa’s Cape Floral Kingdom is the smallest but the most diverse: “There are approximately 9600 plant species in the Cape Floral Kingdom, and about 70% of them are found nowhere else in the world,” says van Wilgen. Most of this is fynbos, the hardy, shrubby plants with fine, small leaves, bulb plants and reeds that can be found from along the Cape’s coasts to mountain tops.

Ecologist Dr Jasper Slingsby explains that “fynbos and the Cape Floristic Region are the richest temperate flora in the world, making up roughly 3% of all known vascular plant species on the planet”.

And it is home to “thousands of plant species that are found nowhere else on Earth”, adds van Wilgen, and the only floral region that is contained within a single country.

While other regions such as the Boreal stretch across North America to Europe and Asia, and the Palaeotropical from the African continent to Polynesian subregions, the thousands of fynbos plants are compressed into a tiny area, says Slingsby, that includes 13 protected hotspots in the Western and Eastern Cape, covering about 90,000km2.

To put that in perspective, in an area that is less than 1% of the continent, there are more than 8,500 species of fynbos that make up about 20% of Africa’s flora. And for South Africans, it’s all right on our doorstep.

“It is entirely limited to South Africa, making it an incredible piece of natural heritage globally, but entirely our responsibility to protect. When people think of South Africa they often think of lions and elephants in a savanna setting, but that biodiversity is common across Africa. Fynbos is uniquely ours,” says Slingsby.

What most people don’t know, says Loubie Rusch, a former landscaper,  is that fynbos is not only found in national parks or in wildlands, but can also be grown in gardens. In fact, you probably already have a species or two planted already, or can find them at a local nursery. Plants such as sour figs and ice plants, with their bright and colourful blooms, are found across the Western Cape and are delightful additions to a garden.

Why is fire good for fynbos?

Fynbos plants, such as proteas, need fire to be able to release seeds and reproduce, explains van Wilgen. In mature fynbos plants, fires stimulate them to release their seeds which then germinate.

For example, when a protea burns, its seeds are released all together from what is left of the flower heads, and begin to germinate in cooler weather, writes van Wilgen. In the following spring after the fire, the seeds will germinate, mature and flower again three to four years later.

The timing needs to be just right: the parent plants need to be mature enough to produce seeds, but they can’t go too long without fire. Fires must occur before they die of old age – protea seeds do not last long after the parents die, says van Wilgen. If these indigenous plants go too long without fire, they go into a stage of senescence, where they begin to die and seed reserves deplete. This occurs after about 30 years.

That sweet spot for fynbos, right between maturity and death, is where fire sparks new growth. It is an integral part of the fynbos life cycle.

Van Wilgen adds that senescent vegetation also burns easier, and has a high fuel load that results in much more intense fires. In a perfect world (one without humans, perhaps) fire is a wonderful thing. It clears out the old and brings in the new, making space for fresh growth.

“Most fynbos species are fire-dependent, in that they require fire to complete their life cycle,” says plant ecologist and biodiversity scientist at the University of Cape Town, Dr Jasper Slingsby.

Yet, there’s a warning. “Many plants that need more time to mature are being eliminated from the landscape as a result of increased fire frequencies. When this happens, other species are also affected. For example, Cape sugarbirds require lots of mature proteas for food and nesting,” says van Wilgen.

Too much of a good thing?

There appears to be a global trend towards an increase in wildfires, theorised to be due to climate change, which creates the concern that fynbos is burning too much.

“While every fire needs a spark to ignite and fuel to burn, the hot and dry conditions in the atmosphere determine the likelihood of a fire starting, its intensity and the speed at which it spreads. Over the past several decades, as the world has increasingly warmed, so has its potential to burn,” Nasa’s Ellen Gray explains.

“Fires are also becoming more frequent due to increases in human-caused ignitions as human populations grow, and this results in many areas burning too frequently,” notes van Wilgen.

But this is difficult to demonstrate empirically, Slingsby says, even with the models and theoretical predictions that suggest that climate change is altering the frequency and intensity of fire.

“Fire is incredibly complex and is affected by a large number of factors,” such as how land is used and managed, the introduction of unnatural fuels like invasive alien species and urbanisation that is altering the land cover.

“Teasing out climate change as a driver among all these other influences is very difficult. This is all the more challenging because our records of fire and the factors that affect fire are often not long enough or accurate enough.”

For South Africans, fire is no stranger – from the Knysna wildfires in 2017 to the flames that covered Table Mountain two months ago.

“The recent fire near the University of Cape Town was the inevitable consequence of three factors coming together – hot, dry weather, flammable vegetation and a source of ignition,” van Wilgen says.

Slingsby notes that flammable vegetation is the result of fire being excluded from an area for too long. “Vegetation really needed to burn to promote fynbos species.

“Urban expansion has prevented the natural flow of fire from the lowlands up the mountain. Unfortunately, the area was also heavily infested with invasive alien species which both contribute to extreme fire conditions and inhibit indigenous species.”

All is not lost, however, as regrowth on Table Mountain has started and the area “is already covered in green shoots”, Slingsby says; within six to eight years there will be mature fynbos growing on the slopes again.

How can we take better care of fynbos?

There are three main things South Africans can do to protect fynbos and the Cape Floristic Region, according to van Wilgen.

First, more nature reserves are needed to protect what is left of our dwindling fynbos. Second, invasive alien plants need be prevented from establishing, or cleared where they have established. Third, prescribed burning needs to be practiced so that fires can take place under safe conditions and at the correct intervals to ensure the survival of all fynbos species.

“We really need to manage both invasive species and fire better. Unfortunately, this is more a social problem than a scientific one. We have the science to guide what needs to be done, or at least where to start – we must always continue to reassess and refine. It is more about navigating the social, political, legal and financial hurdles to be able to put this knowledge into practice,” Slingsby says.

“As it stands, upper Newlands and Kirstenbosch were incredibly lucky the wind changed direction. If it hadn’t, the damage would have been far, far more severe. Fortunately, we have a second chance to prevent that area from being yet another fire disaster – but will we use the opportunity?” DM/ML