Saving the Holy Ghost: Eco-mapping the past to preserve the future 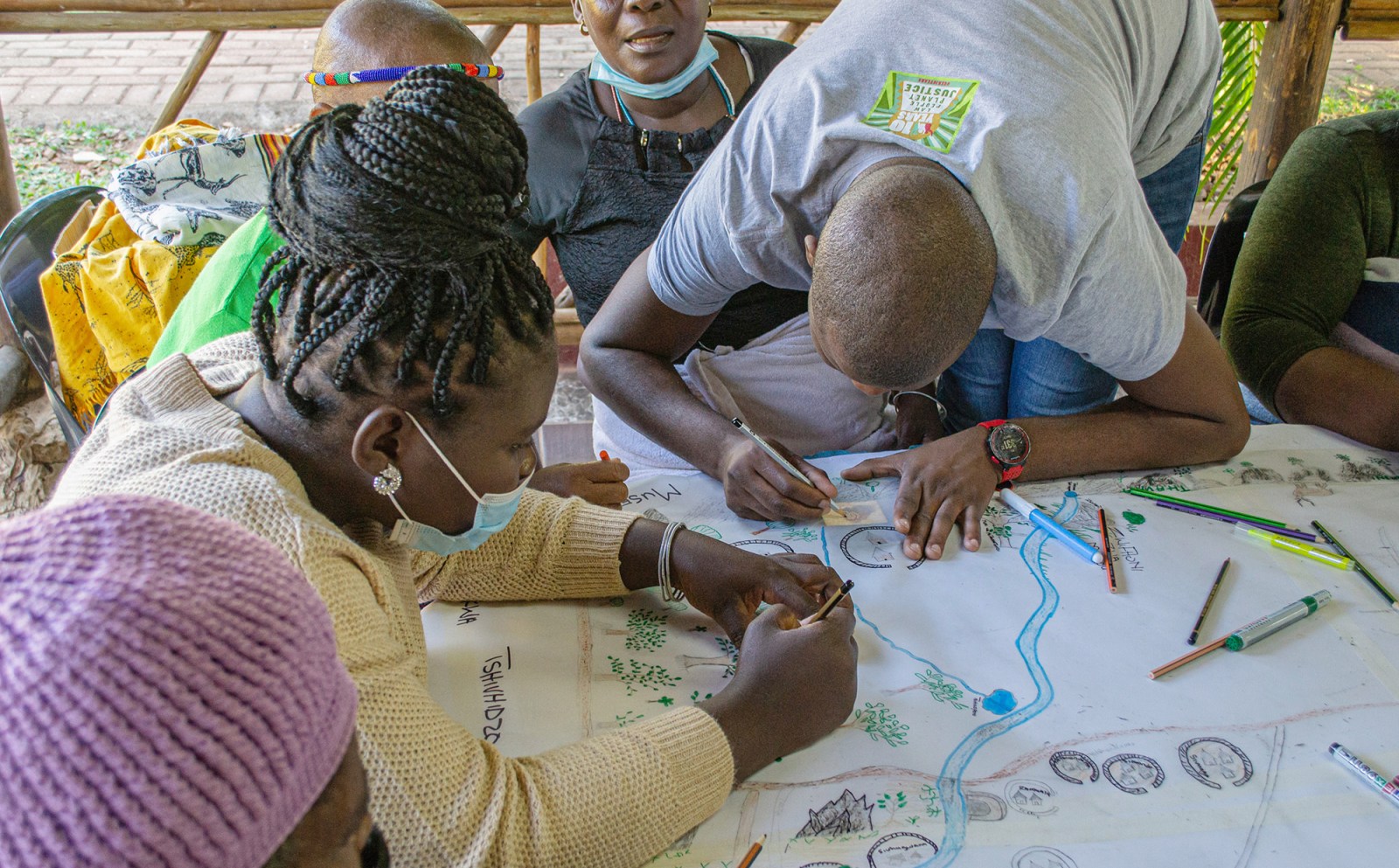 The eco-mapping process demonstrates the value of deeply understanding the way things have existed in the past and the consequences of the current course of action. (Photo: Blackdot Multimedia (Pty) Ltd)

Eco-mapping — developed by indigenous peoples in the Colombian Amazon — is being introduced by NGOs to areas of rural Limpopo in response to the threat of the proposed Musina-Makhado Special Economic Zone and extractivism.

Claire Rousell is an artist, writer, activist and researcher focused on the intersection of extractivism, food sovereignty, social justice and art. Her work takes a variety of forms including visual harvesting, animation, poetry and she plays a key role in Straight from the Ground NPC, a vegetable box scheme with local small-scale farmers in and around Johannesburg.

Brandon Abdinor is an attorney and an environmental rights and climate change activist. At the time of writing this article, he was an associate of Earthlife Africa and has since joined the Centre for Environmental Rights as a climate advocacy lawyer. This article is co-authored in his personal capacity.

“There was a Baobab tree there, where people used to meet and drum,” says Tshiwela Tshihuwa, pointing to an area on a large, thoroughly detailed hand-drawn map on the floor. “Now it’s a petrol station and people don’t really drum as much anymore. They play music on speakers and dance to that.”

She points to a large blue ribbon drawn on the map, “ZZ2 have farms on the Muengedzi River and have made a dam”. She explains that her uncle is staying there, despite pressure from farm owners for him to leave. “Even lawyers couldn’t remove him!” When her aunt died, the woman fought for her right to be buried there even though it meant she could not be buried for two years.

“Now you have to pay at the farm gate to get mashonzha,” she says pointing to the gate on the map, referring to the harvesting of mopane worms, a local delicacy and important cultural food, that can no longer be freely gathered as people in the region have done for centuries. Now they must pay a farmer to access the land that historically was communally tended. The same goes for firewood. You must pay to gather it. This, along with hundreds of species of plants and animals that people of the area were regularly in contact with and formed part of the web of day-to-day relationships, are now cordoned off through land ownership in an area formally governed by communal land use.

“People should have access to wild animals. We learn a lot from them,” says another participant in the five-day eco-mapping process that took place near Thohoyandou in May 2021, and was made possible through a collaboration between Earthlife Africa Johannesburg and Dzomo La Mupo (The Voice of Nature/The Universe), with support from Natural Justice.

The three NGOs collaborated to enable the eco-mapping workshop, partially in response to the threat of the proposed Musina-Makhado Special Economic Zone (MMSEZ), as well as part of a deeper and broader process of community building and awareness-raising around extractivism by the organisations involved.

The destructive impacts and dubious underpinnings of the project can be read about here, here, here, and here. The project is still undergoing a plagued and flawed environmental impact assessment (EIA) process that is currently in limbo due to alleged procedural irregularities and complaints about its poor attempts at meaningful public participation. EIAs are required by law to support sound decision-making and ensure that environmental, socioeconomic, heritage and other impacts are properly assessed. This is a healthy piece of legislation that, if implemented with integrity and commitment to real change, is part of what democracy in action looks like.

This is a far cry from what passes as standard in public participation processes and the MMSEZ is no exception. There appears to have been very little concerted effort to reach out to affected people and communities. Public participation meetings were largely not translated into local languages and presentations about the project and its impacts were short, incomplete and awash with technical terminology.

Q&A sessions were subject to time limits and many questions could not be answered as the necessary specialists were not present. In essence, those most affected are given the least airtime and are often the last to know about what is planned for their homes, livelihoods and sacred sites.

The alternative to this would be to imagine a situation where the process is led by the affected communities and is centred on the connected fates of a diversity of species, not only human, and how these would be affected should a particular project be given the go-ahead. Such an approach is unheard of as part of an official EIA and public participation process and yet, the eco-mapping process sparked the imagination for what alternative public participation could look like.

This particular approach to eco-mapping was developed by indigenous peoples in the Colombian Amazon with whom Vho Mphatheleni Makaulule, the founder and director of Dzomo la Mupo, trained. It is an intergenerational process that calls on the memories of the elders and the creative energy of the young people to draw on to large sheets of paper the rivers, mountains, homesteads, sacred sites, animals, plants and, in general, the order of things, as far back as they can remember.

This ancestral map forms the baseline that allows the young people to imagine how things were. This will become a reference for how the land could be restored. It is then layered over with a sheet of tracing paper which is inscribed with drawings and writings of how things currently are.

And then the final layer shows what is likely to become of the area if the development takes place. It is an utterly different approach to gathering information, assessing risks and exploring the needs and ways of protecting the environment for the wellbeing of present and future generations.

This eco-mapping event held near Thohoyandou in Venda was conceived and enabled by Makaulele and Executive Director of Earthlife Africa Johannesburg, Makoma Lekalakala, and entailed five days of discussion, remembering, dancing, singing and drawing maps of an entirely different sort from the so-called empirical maps that underpin so much of the colonial land-grabbing imperative.

Wisdom and knowledge from the elders met the fiery and imaginative passion of the younger community activists and the debate was lively, broad and deep. What emerged was a sense of belonging and holism. The people, the land, the flora and fauna, the history, the culture and sacred practices, all inextricably woven together, alongside aspirations for development and enhanced wellbeing.

If the MMSEZ is constructed and goes into operation the entire social and environmental character of the Vhembe Region will be altered, likely forever. And for all these devastating effects there has been little holistic, detailed evaluation, despite the existence of the environmental impact assessment legislation.

Sound environmental decision-making cannot occur without a full understanding of all of the impacts on the interrelated systems that make up the rich tapestry of life in the Limpopo Valley, and the EIA and public participation processes as they stand are just not equipped to do justice to this complexity.

The eco-mapping process demonstrates the value of deeply understanding the way things have existed in the past and the consequences of the current course of action.

And that the primary experts on the land, its species and Zwifho (sacred sites) are the people who have lived here for generations, and in any assessment of the land or prospecting for some sort of corporate gain, should be the first to be consulted. DM

Saving the Holy Ghost: Eco-mapping the past to preserve the future