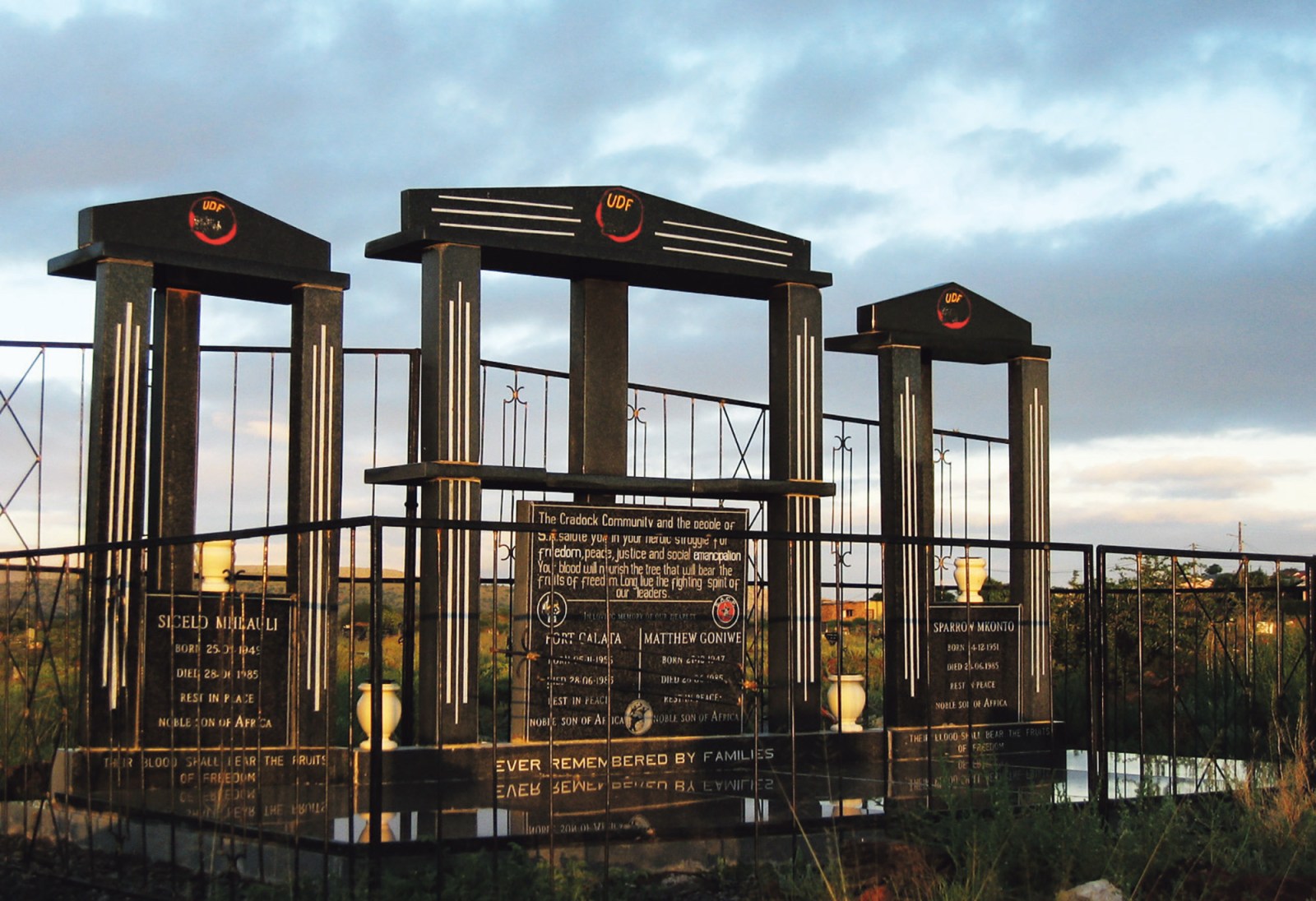 The graves of the Cradock Four in Lingelihle graveyard. (Photo: David Forbes)

June 27 is the 36th anniversary of the murder of the Cradock Four. Their families are still awaiting the prosecution of their killers. They have joined the call for an independent commission of inquiry into political interference with the NPA that halted prosecutions of apartheid-era murderers.

Matthew Goniwe, an activist teacher and prominent community leader in Cradock, had helped to organise and support a school strike in the community, which served to catalyse the town’s strong resistance to the apartheid government.

Fort Calata too had a history of activism that extended from his family’s roots; his grandfather James Calata had served as the Secretary-General of the African National Congress (ANC) from 1936 to 1949. Fort, a  teacher, worked closely with Goniwe. Their close collaboration brought them to the attention of the apartheid security apparatus who wanted to reduce their influence even if it meant eliminating them.

Sicelo Mhlauli, the headmaster of a school in Oudtshoorn, was also a member of the UDF, as was Sparrow Mkonto, a railway shop steward who became a senior office-bearer of the Cradock Residents’ Association (CRADORA) also attracting the attention of the security police.

The four never arrived back in Cradock. They were intercepted by the security police on their way home, and their charred remains were discovered days later. Badly burnt, their bodies each bore numerous stab wounds; forensic reports confirmed signs of torture and other physical harm. Their car, which had also been burnt beyond recognition, had licence plates affixed that appeared to be untouched by the effects of the fire and that did not belong to the original car.

Although the apartheid state denied its involvement in the murder of the Cradock Four, the identities of the killers began to emerge at the two inquests, including later when they applied for amnesty to the Truth and Reconciliation Commission (TRC). Revelations of the secret military signal dated June 1985 emerged,  indicating that the four activists had been murdered at the behest of the State Security Council (SSC).

A two-year inquest into their deaths began in 1987, presided over by Magistrate E De Beer. On 22 February 1989, De Beer, not unsurprisingly declared, that there was “absolutely no evidence before me that any member of the Force had anything whatsoever to do with the killings”. He concluded that four activists had been killed by “unknown persons”.

Former President De Klerk, under pressure from media groups, the Black Sash and the families, following the New Nation’s publication of the top-secret military signal, was compelled to authorise a second inquest in 1992. The leaked military signal written in Afrikaans, translated to an authorisation that “the abovementioned persons should be permanently removed as a matter of urgency from society”.

Given the political context in South Africa in 1984, it is highly unlikely that these words could be misconstrued as anything but an order to kill.

The second inquest began on 29 March 1993 presided over by Judge Neville Zietsman, drawing the noose ever tighter around the neck of the shadowy state security structures. Allegations of a secret death squad – the “Hammer Unit” tasked to take out anti-apartheid resistance organisations  – began to emerge. While apartheid officials denied that the military signal was an order to kill, the late Advocate George Bizos representing the Cradock Four families argued that members of the South African Police (SAP) and Security Forces were responsible for the killings.

Judge Neville Zietsman, delivering his verdict in 1994, agreed with Bizos, finding the security forces responsible for the killings although he refused to name any individual. Zietsman nevertheless found that a case of suspicion had been made out against SAP officers, including Col Snyman and Col Winter, and  SADF members including Brig van der Westhuizen, Colonel du Plessis and Major General van Rensburg.

Seven security branch officials including Eric Taylor, Gerhardus Lotz, Nicolaas Janse van Rensburg, Harold Snyman, Johan Martin “Sakkie” van Zyl, Hermanus du Plessis, and Eugene de Kock applied for amnesty for the murder of the Cradock Four, ie Matthew Goniwe, Fort Calata, Sparrow Mkonto and Sicelo Mhlauli. According to Van Zyl, Colonel Van Rensburg directed him to make the “attack… and appear as if it was a vigilante or AZAPO attack”. The amnesty hearings revealed that the state had mooted killing Goniwe the year before. The death squads implicated included the Hammer Unit established by Joffel Van der Westhuizen and operatives from Koevoet.

The minutes of the SSC meeting held on 19 March 1984 revealed that the SSC authorized the assassination of Goniwe, contradicting the evidence of the amnesty applicants that the decision to kill Goniwe was only taken two or three weeks prior to his death.

The TRC hearings revealed that in 1984, it was General Joffel van der Westhuizen who had requested the SCC to “remove permanently from society as a matter of urgency” – Matthew Goniwe, Fort Calata and Mbulelo Goniwe.

Twelve senior apartheid cabinet ministers including Minister Barend du Plessis, Defence Minister Malan and FW De Klerk attended the SSC meeting on 19 March 1984. Former apartheid-era Minister of Education Barend Du Plessis is alleged to have stated that: “In Cradock is daar twee oud-onderwysers wat as agitators optree. Dit sou goed wees as hulle verwyder kon word”, which translates into “In Cradock there are two ex-teachers who are acting as agitators. It would be good if they could be removed.”

Former President De Klerk, also present at this meeting, told The Guardian  in 1999 that the meeting had merely decided to move Goniwe to another teaching post away from Cradock. This assertion was ridiculous as it is unlikely that  Cabinet ministers would engage in conversations around removing Black teachers from their jobs in a particular town.

The amnesty committee denied amnesty to Taylor, Lotz, Van Rensburg, Snyman, Van Zyl and Du Plessis for the murder of the Cradock Four, based on the lack of full disclosure – however, a number of questions remain unanswered. The foot soldiers who perpetrated this dastardly crime are known, but those who orchestrated the killings, including those with command responsibility, have yet to be held accountable.

Lukhanyo Calata and family members of the Cradock Four, like hundreds of other families whose loved ones died at the hands of the apartheid state, looked to the democratic state to facilitate their struggle for truth and accountability. While the amnesty deal paved the way for South Africa’s transition to democracy, critics argue justifiably that it generated impunity which haunts our democracy.

The Supreme Court of Appeals in the Rodrigues judgement expressed that it was perplexed that the Executive and the National Prosecuting Authority colluded to have the TRC cases suppressed, and that NPA did not follow the ‘bold’ prosecution policy recommended by the TRC.

Yasmin Sooka was a commissioner of South Africa’s Truth and Reconciliation Commission. She is the Executive Director of the Foundation for Human Rights. For a profile of Yasmin Sooka see here. For further arguments on why an independent commission of inquiry into the political interference is needed read here and here.