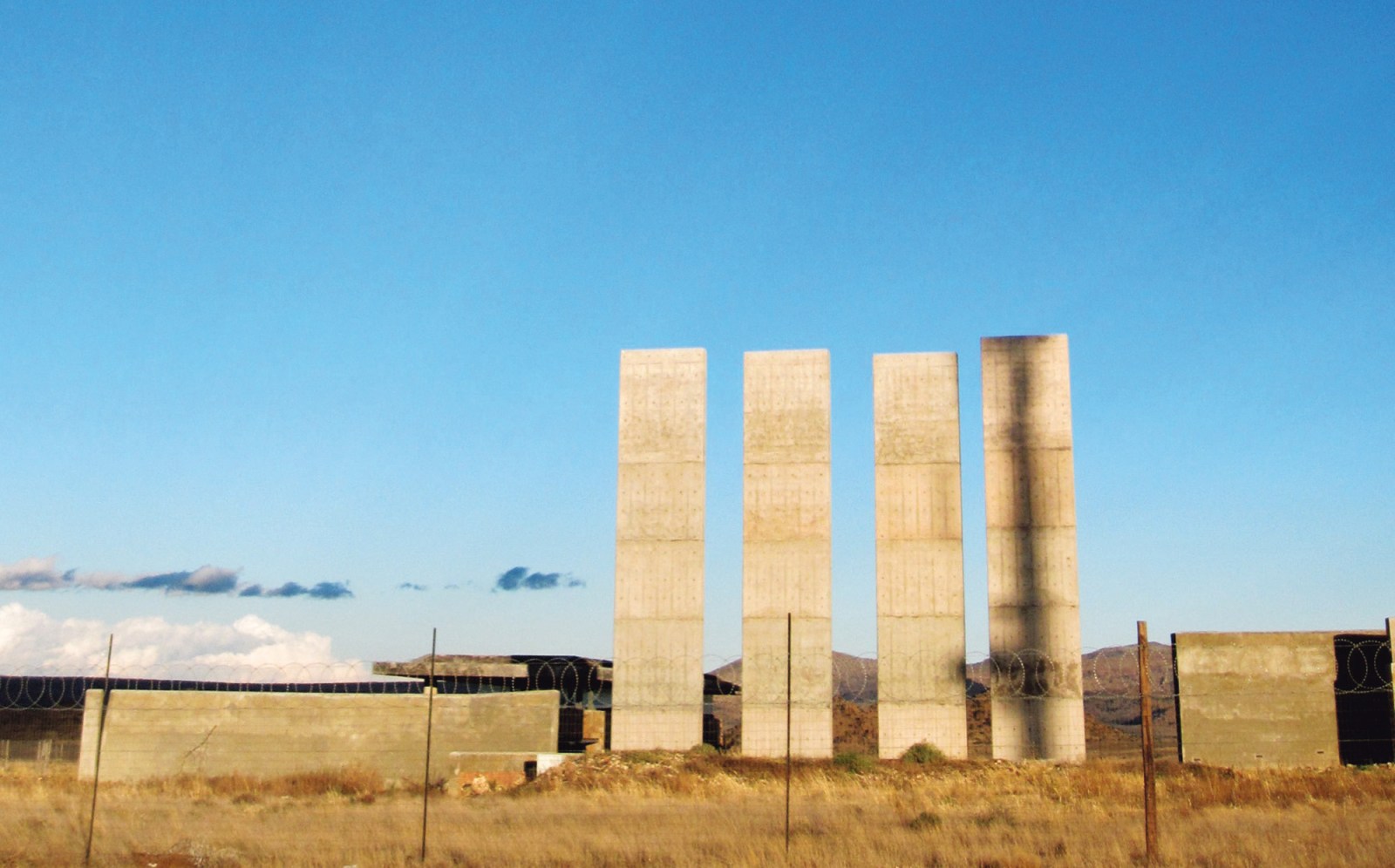 The Cradock Four memorial overlooks Lingelihle and the town, from a hill visible for miles around. (Photo: David Forbes)

The former TRC commissioners and the families of victims of apartheid-era crimes believe that a commission of inquiry is the only way to bypass the vested and conflicted interests of political leaders who are hiding the truth.

Judging by the happenings at the Zondo Commission, the reports of ongoing corruption and the desperate poverty so many people find themselves in, the ANC has a lot to answer for.

But in the quest for renewal and unity based on principle and public service, one of the issues it must also provide answers for is why 300+ cases handed over by the Truth and Reconciliation Commission (TRC) to the National Prosecuting Authority (NPA) in 2003 for further investigation continue to gather dust.

In March 2021, a fresh appeal for President Cyril Ramaphosa to act was written by former commissioners of the TRC. Their plea had been made several times before, as well as by families of victims and 18 of South Africa’s leading human rights organisations.

However, in light of the stonewalling and non-responses in the past (the first letter was written in 2019), the latest letter calls for the president to:

“Appoint, without further delay, an independent commission of inquiry into the suppression of the TRC cases in terms of the Commissions Act 8 of 1947, with the necessary powers to compel the production of testimony and evidence.”

A proposed terms of reference for the commission “to investigate the alleged suppression of cases referred by the TRC to the NPA” is also attached to the letter.

Unfortunately, as with past letters, it seems it didn’t merit the president’s consideration. In May, a letter of acknowledgement was received from the acting head of legal and executive services in the Presidency, passing the buck to the Department of Justice and Correctional Services. Since then, silence. Again.

Is this how little we value ensuring criminal justice against those who murdered many of our heroes?

The former TRC commissioners — Yasmin Sooka, Archbishop Desmond Tutu, Fazel Randera, Dumisa Ntsebeza, Mary Burton, Richard Lyster and Glenda Wildschut — and the families feel that a commission of inquiry is the only way to bypass the vested and conflicted interests of political leaders who are hiding the truth.

Calling for a commission is a last resort needed to compel the state to reopen the cases of the people who disappeared and died at the hands of apartheid-era security operatives with probable sanction by high-ranking political players and apartheid government appointees.

The Cradock Four are a case in point. The anniversary of their murder in 1985 falls on 27 June.

For nearly three decades there have been too few honest answers about just how far up the chain of command complicity crept. Nor is it clear why these individuals are being protected even now, 27 years into democracy, by an ANC government.

We remembered once more those killed during and after that uprising. Yet, the whole truth remains elusive and still unsettles the birth story of South Africa’s democracy. The negotiations that led to the miracle of 27 April 1994 were clearly not just about necessary trade-offs and compromises on constitutional questions. The suspicion is that there were also dark deals with devils and unspeakable pacts aimed at protecting guilty parties on both sides from exposure and prosecution.

The question is: who still benefits from cover-ups and the continued suppression of information and why?

As we witness the noble quest to find the truth around State Capture, the government and ANC must come clean about other forms of corruption and complicity. And if it won’t, an independent commission must compel it to.

It’s necessary for families of victims who ache still for answers.

But it’s also required because otherwise, a series of court rulings recognising and condemning political interference in blocking prosecutions seemingly hold no weight. Ignoring the much-vaunted rule of law can only spell further peril for democracy.

As far back as 2015, Vusi Pikoli, the former national director of public prosecutions (NDPP), and Anton Ackermann SC, former head of the Priority Crimes Litigation Unit, submitted affidavits disclosing evidence of political interference in the prosecution of the TRC cases by Cabinet ministers and senior officials in the SA Police Service.

In 2019, former Security Branch cop and murder accused Joao Rodrigues bought a case against the NPA seeking a stay of prosecution for his role in the murder of anti-apartheid activist Ahmed Timol in 1971. In its judgment, a full Bench of the Gauteng North High Court recognised and rebuked the NPA for permitting political interference and said (at para 64 & 65):

“Society as a whole had an ongoing interest in the work of the TRC… Parliament, which ultimately represents the legislative authority of the State, had a right to know when the letter and spirit of legislation that it had passed was being deliberately undermined. None of this occurred and the NPA must accordingly accept the moral and legal consequences of this most serious omission and dereliction of duty on its part.

“There must be a public assurance from both the Executive and the NPA that the kind of political interference that occurred in the TRC cases will never occur again. In this regard they should indicate the measures, including checks and balances, which will be put in place to prevent a recurrence of these unacceptable breaches of the Constitution.”

In fact, on Monday when the SCA dismissed Rodrigues’ appeal, it recorded that there “was indeed interference with the NPA… as a result of an executive decision”. It called this “perplexing and inexplicable”. It also noted that “The Full Court rightly recommended a proper investigation into these issues by the NDPP and a determination whether any action in terms of s 41(1) of the National Prosecuting Authority Act 32 of 1998 (NPA Act) was necessary.”

In May, Krish Naidoo, speaking as the ANCs’ legal expert on My Father Died for This, an Al Jazeera documentary about Lukhanyo Calata’s quest for truth and justice, said that there was “no explanation” for the non-prosecutions — “it could have been lack of focus, bad planning, not being prioritised properly” and that “some matters would have slipped through the cracks”.

This response shows how easy it’s become for the ANC to dodge accountability and why a commission with legal teeth has become a necessity.

Naidoo’s comments are also a damning revelation that the ANC never took seriously its responsibility to put in place frameworks or mechanisms to effectively continue where the TRC left off.

It’s time the ANC breaks its silence and names the individuals who deliberately blocked (and are still blocking) the investigations politically and procedurally.

Naming names and demanding that they answer questions about their motives is the starting point to mapping the web of complicity.

But time is of the essence. According to leading human rights lawyer Yasmin Sooka, “We are now in a major battle against time and age.”

Each passing year those implicated in murders they committed decades ago get to claim more strongly fading memories as their defence. If we don’t act fast, the ageing cohort of killers, from foot soldiers to senior politicians; suspects and witnesses alike, are likely to never testify. The danger is they will go to their graves with information and secrets that might provide answers for families who will never know what happened to their loved ones in the last weeks, days and moments of their lives.

It also has the damning effect of keeping the door slammed shut on reparations for families of victims. And so the cleavages in society pull still further apart without a strategy for redress and restitution for historical injustices.

That the ANC has allowed this to happen is a shameful middle finger to those who stood for and died for liberation in South Africa.

This makes the call for a commission of inquiry not just about the 300 families that have been forgotten and ignored, but about every South African who needs light to be shed on a dark history so a true new dawn can begin to shine above the clouds of our past. DM/MC