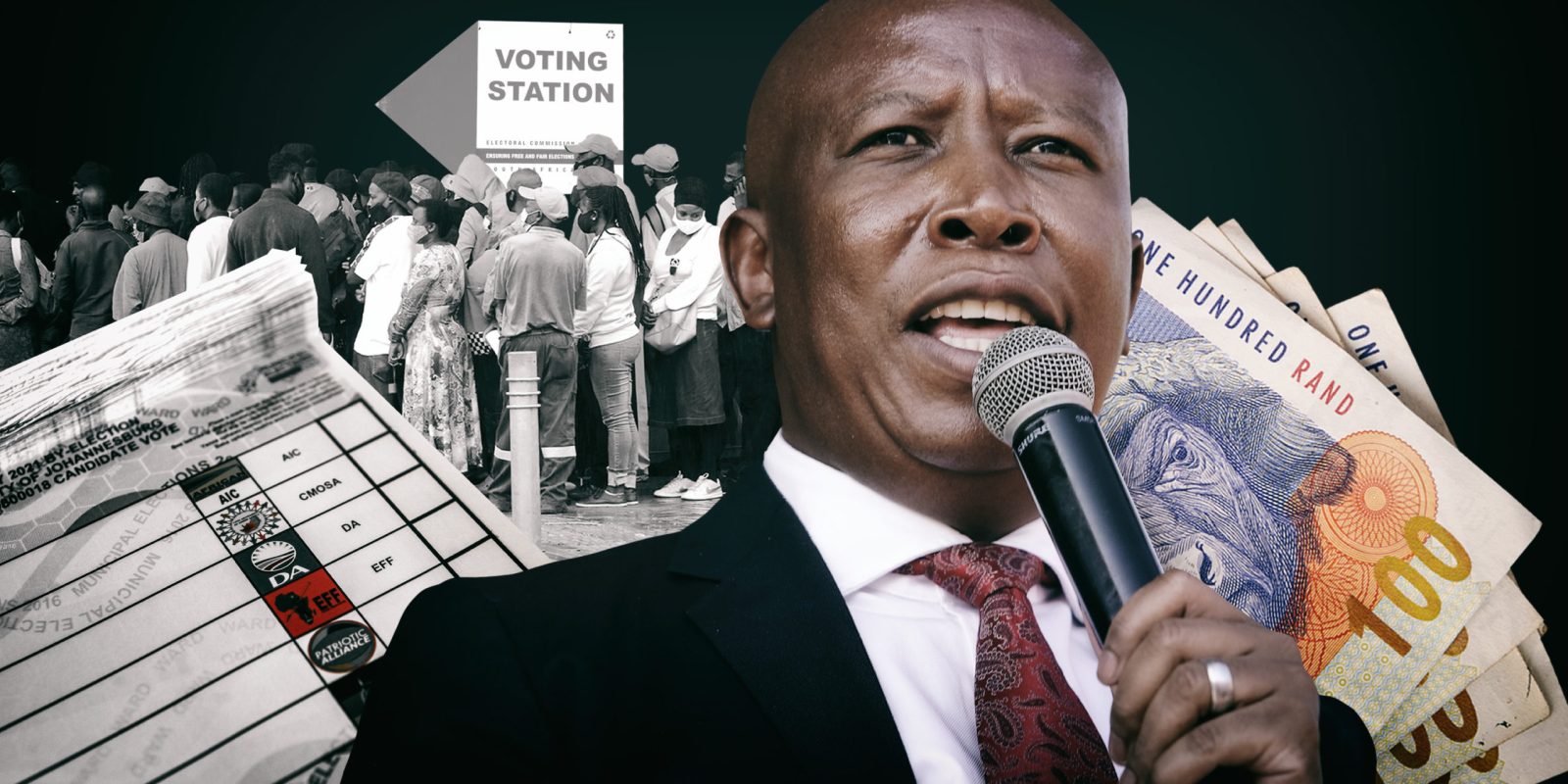 The EFF leader is politicising the most important issue of our time: The Covid-19 vaccination drive. There is zero evidence he is doing this for the good of South Africa’s people and that he cares in any way for anyone who is not his supporter or follower. He has provided no evidence for any of his claims.

The Economic Freedom Fighters says it is planning a protest march later this week to demand that the South African Health Products Regulatory Authority (Sahpra) allow the use of the Sputnik-V and Sinopharm vaccines. It appears to mark the first attempt in South Africa to politicise the use of vaccines, at a time when millions of people are desperate for an injection to protect themselves and their families from the virus.

But EFF leader Julius Malema has also made many more baseless claims and in some cases his own positions are contradictory. He appears to be growing more desperate before a local election which could have devastating results for him and trying to gain traction, any traction.

On Wednesday Malema held a mass rally outside Uitsig High School in Centurion in what appeared to be a clear contravention of the Covid-19 regulations announced by President Cyril Ramaphosa the night before. While observers can argue about the number of people there, it is certain that the number was above the limit of 100 people allowed at an outdoor gathering.

He went on to say, “The Russians have offered vaccines but they refused it. We want our country back. Let us go and reclaim our country from Ramaphosa. If it means death, so be it. If it means prison, we will wait with honour because prison for revolutionaries is an honour. Only cowards will be scared of prison.”

Malema appears to be telling people they must put themselves at risk of the virus as a political action. But he then claims that this is to get the one thing that would protect them, vaccines.

It is not easy to understand the logic of this statement.

It was not the only fact-free or illogical statement on Wednesday.

While demanding that people break the lockdown regulations designed to save them from Covid-19, he demanded that schools be closed to protect children from the virus.

As quoted by EWN, he said, “Can you imagine children dying in their numbers” from the virus, and insisted that education institutions be shut.

This contradicts all the scientific evidence on children and Covid-19. While there are increasing numbers of children who have contracted the virus, the medical evidence shows that they do not develop severe symptoms or die from it.

The country which has had perhaps the worst pandemic, and the highest percentage of deaths, is the United States. The American Academy of Pediatrics says that children comprise “0%-0.23% of all Covid-19 deaths, and eight states reported zero child deaths”.

In South Africa, the Paediatric Society has said consistently that children are safer in schools than outside them and are not at risk from the virus.

Then, on Friday last week, the EFF released a statement accusing Sahpra of being biased against vaccines from Russia and China. It is demanding that these vaccines be approved for use immediately.

In the statement, the party claims that Sahpra chair Professor Helen Rees is conflicted on this issue. They say that, “We have it on solid authority that Helen Rees is married to a Fazel Randera, who is in turn a shareholder in Aspen. Aspen is the local partner of J&J [Johnson & Johnson] and stands to privately benefit if Sputnik-V and Sinovac are not authorised in South Africa.”

It is true Rees is married to Randera. Randera is a former inspector-general of our intelligence services, a former commissioner of the Truth and Reconciliation Commission, and an obstetrician. He met Rees while he was an anti-apartheid activist in the UK.

Rees moved to Zimbabwe with Randera and then to South Africa to work in hospitals here at a time when their mixed-race marriage would have been rare.

Randera told Daily Maverick on Saturday that, “There is no conflict of interest from my side, I have no shareholding in Aspen; if there was a shareholding it goes back to almost eight or nine years ago when the shares were sold off.”

The EFF has provided no evidence of its claim of a conflict or of a current shareholding in Aspen. But the shouts were loud, nevertheless.

Many times in the past the party has stated claims as facts, only for them to turn out to be the opposite.

In 2018, the party claimed that Public Enterprises Minister Pravin Gordhan had opened a bank account in Canada and claimed he was guilty of racketeering. The claim was simply not true and again no evidence was brought to prove it.

Also, any decision about the use of vaccines would actually be out of Rees’s hands. Sahpra uses a system of expert committees, doctors and scientists who assess the science. It is, in the end, a scientific process, where evidence is tested. Facts matter and it is on them that these decisions are based. It would be very hard for any person or even group of people to direct decisions individually.

… Malema may be trying to change the narrative, and is finding it difficult to find an issue that will win him votes in October.

At the same time, Sahpra has said it does not yet have all the data on which to assess the Russian and Chinese vaccines, despite asking for it. This means the ball is actually in the court of those applying for the registration of the vaccines, not Sahpra.

This then leads to the question: what is to be gained from politicising the vaccine programme, and for attempting to turn it into a debate about why Sahpra is not allowing these vaccines?

It appears that the answer is simple: Malema has recently battled to gain public attention.

While he appeared to be gaining plenty of traction into the 2019 elections, he won only 10.8% of the vote.

The party is now going into local elections. Traditionally these have been disappointing for the EFF because as a smaller party, it finds it difficult to campaign across the entire country. It has won only 12 local wards across South Africa while it has gathered support on the proportional representation system in councils.

At the same time, it is growing harder for the party to counter claims that its top leaders are corrupt.

The fact that the brother of Floyd Shivambu, Brian Shivambu, said in a legal document that he had received R4.55-million from VBS for no reason has, for many, consolidated perceptions that the party benefited corruptly from that banking scandal.

Malema’s own relationship with the cigarette smuggler Adriano Mazzotti (who paid the EFF’s election deposit in 2014) should also be a factor for some voters.

The EFF has also been demanding that the local elections be postponed, claiming that it is not safe for them to go ahead — while saying people must put themselves at risk by breaking lockdown regulations, mind you.

All of this suggests that Malema may be trying to change the narrative, that he is finding it difficult to find an issue that will win him votes in October, and that he is worried that he will have a disappointing result in those polls.

This then leads to the question, why are Malema and the EFF lying, and making such transparently contradictory statements?

It may simply be that the truth does not suit them, that the truth is against them and thus they have no other option. There are huge similarities to former US President Donald Trump here: when the facts did not suit him, he simply made them up to gain some offensive advantage in what they perceive as a war for voters. This may well be happening here.

But this does not mean that voters will buy it. While they did but it in the US from Trump and company, Malema has made untrue claims here before and has not been rewarded.

Of course, the lockdown regulations and the pandemic as a whole have made it difficult for anyone to conduct polling, which means it is hard to predict the results of these local elections. It could be that the EFF is about to grow its support. But for the moment this appears unlikely.

In the meantime, Malema is now politicising the most important issue of our time: the Covid-19 vaccination drive. There is zero evidence he is doing this for the good of our people and that he cares in any way for anyone who is not his supporter or follower. He has provided no evidence for any of his tortured claims.

Malema is doing this only for his own, narrowly personal, toxic political agenda. DM