NOT YOUR BEST FRIEND 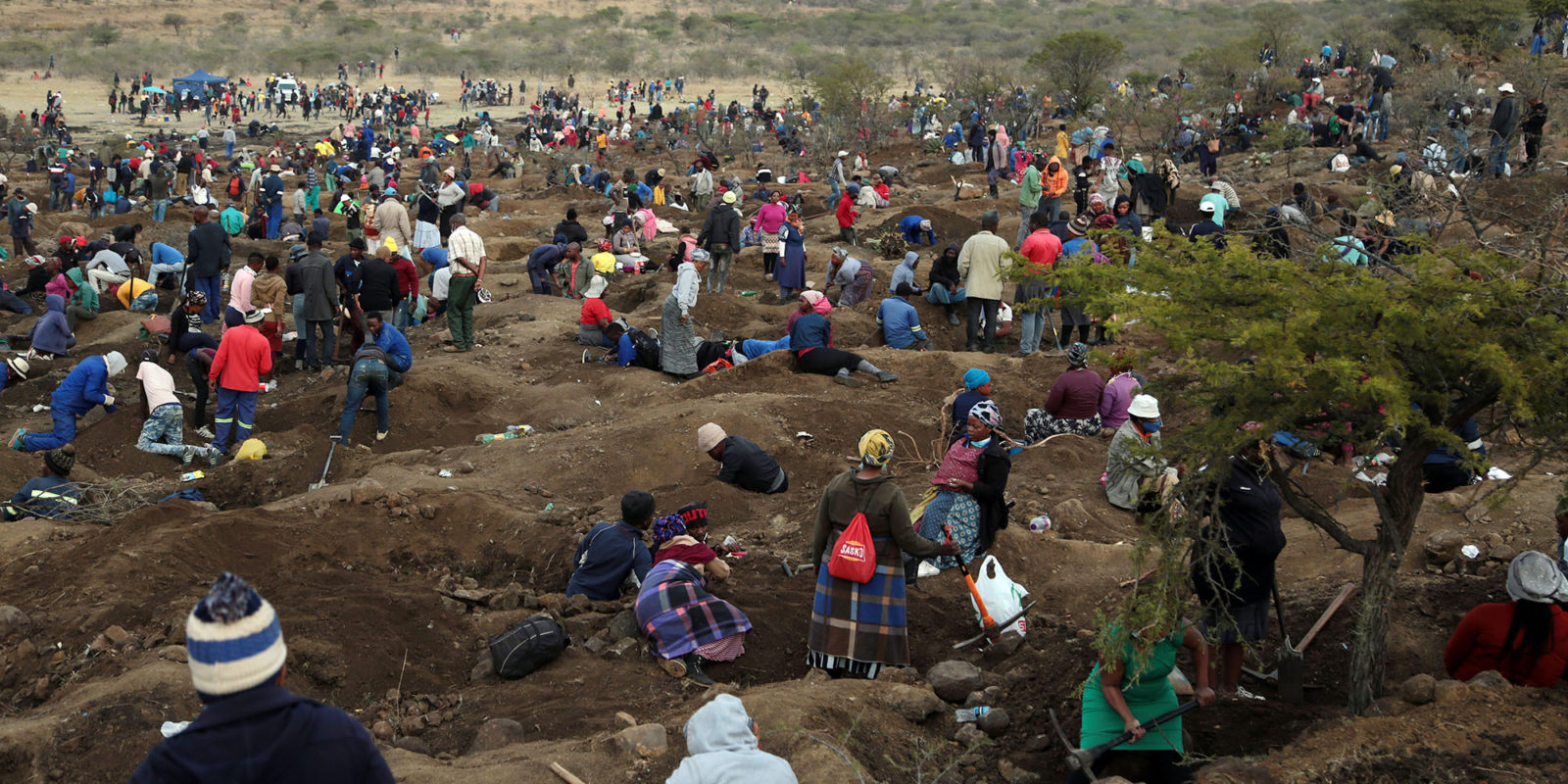 Residents dig for what they believe to be diamonds at KwaHlathi village near Ladysmith in KwaZulu-Natal. A scientific report has confirmed the stones are quartz crystals. (Photo: Felix Dlangamandla)

A preliminary scientific report has confirmed that stones being excavated by illegal prospectors at a poor, rural area outside the KwaZulu-Natal town of Ladysmith are quartz crystals, and not the life-altering diamonds that many diggers had hoped.

As previously reported by Daily Maverick, thousands of mostly locals, and some from other parts of the province and country, have been flocking to a 50ha area in the village of KwaHlathi to dig for diamonds since an unidentified stone was unearthed on Saturday, 12 June 2021 by a herdsman.

But KwaZulu-Natal’s MEC for economic development and environment, Ravi Pillay, confirmed at a press briefing on Sunday, 20 June what many geologists had been saying since images of the stones were strewn all over the media — that the area was not in a diamond zone and that the objects were indeed quartz crystals.

Tests undertaken by the Council for Geoscience on samples that were collected last week had “conclusively revealed” that the stones were “not diamonds”, Pillay said.

“The preliminary report shows that the site of the informal mining is located on the edge of a Karoo dolerite sill which is not in a zone where diamond occurrences are present.”

The intergovernmental task team that was briefed to probe the matter had met community leaders and representatives on the afternoon of 20 June regarding the findings, he said. The findings are expected to be presented to the provincial cabinet this week.

During the same briefing, Council for Geoscience CEO Mosa Mabuza said that a “preliminary assessment has corroborated that [the stones] are quartz crystals”.

Mabuza said the scientists sent to inspect the site had looked at the area “through a different prism”, with the view to socioeconomic upliftment.

A study would be conducted in the area with the aim of formalising economic development, he said.

The researchers would also investigate the possibility of shale gas as a means of development, he said, and of shallow aquifers, given the extreme lack of water in the area. This was a “broader study”, according to Pillay, and a progress report would be forthcoming in three months.

The ANC-led Alfred Duma municipality, with its seat in Ladysmith, is plagued by water shortages and interruptions, which, with allegations that mayor Vincent Madlala is corrupt and involved in taxi violence, have led to violent protests.

Mabuza said the geoscientists would be able to start the study only once the illegal prospectors vacated the area.

There was a strong police presence when Daily Maverick visited KwaHlathi last week. The provincial government said that it had been concerned about the illegal mining, environmental degradation of the area and the diggers spreading Covid-19.

Asked by Daily Maverick who would implement the recommendations of the broader study — that would include a hydrological report — should it return results conducive to socioeconomic upliftment, Pillay said that that competency would fall to the province’s cooperative governance department, and the district. Alfred Duma falls under the uThukela District Municipality, which is under administration.

Daily Maverick also asked Pillay why it had taken a “diamond rush” by desperate locals for the province to focus on the underdeveloped area. The MEC said that KZN had “many developmental challenges” which, in the case of KwaHlathi, had been “highlighted by this experience”.

According to the StatsSA 2016 Community Survey, Alfred Duma has a population of 356,274, with the median age being 21. There is a 74.2% unemployment rate in the area, which has remained relatively consistent over the past decade.

The average annual household income is R14,600. Only 37% of the population has completed matric. DM

James Stent for GroundUp • 42 mins ago

Steve Keating for Reuters • 3 hours ago