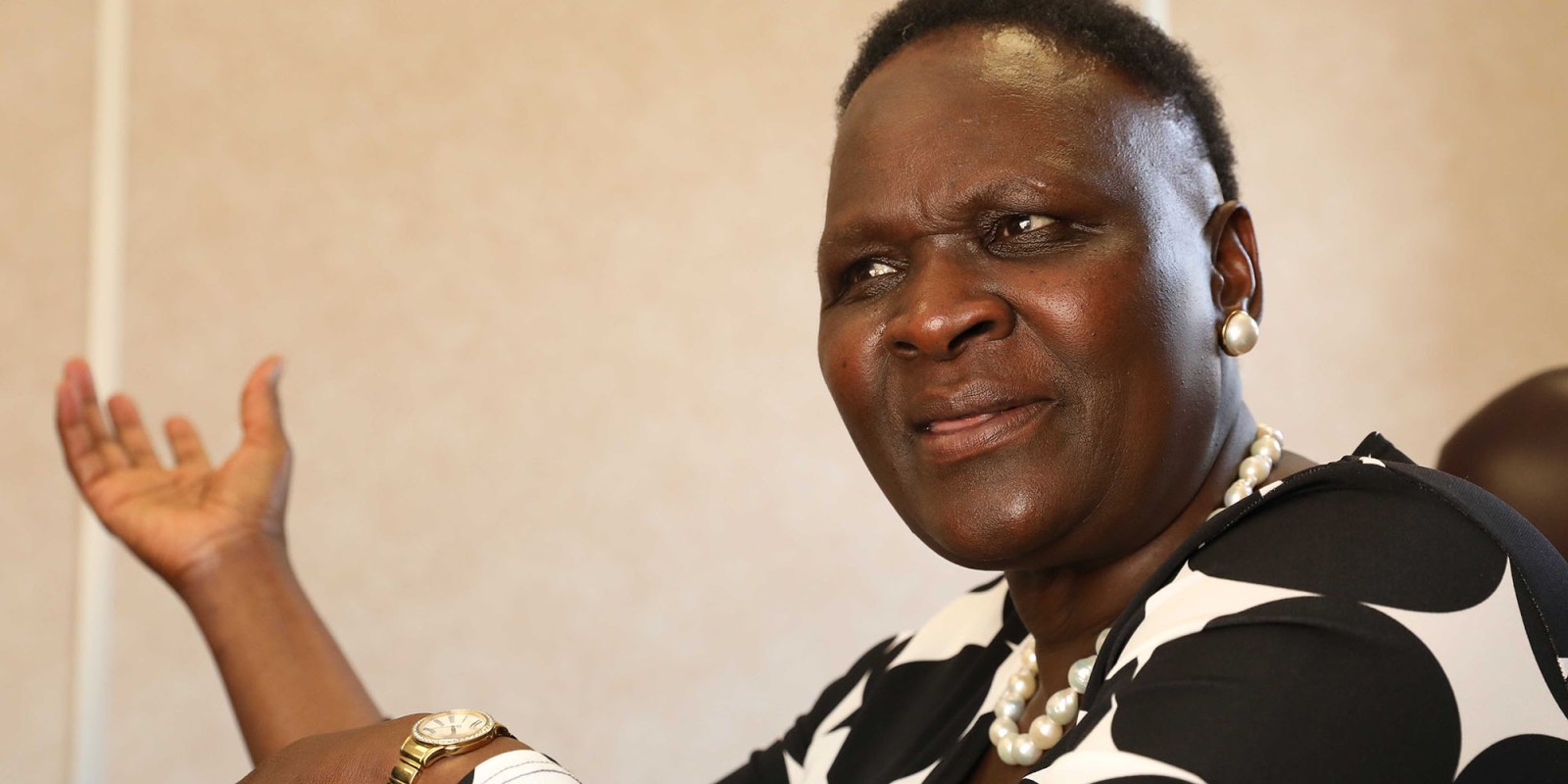 Almost 10 years after the massacre of 34 striking miners by police at Marikana in 2012, the Pretoria High Court has dismissed, with costs, disgraced former national commissioner of police Riah Phiyega’s attempt to have the damning findings of the Farlam Commission of Inquiry overturned.

Back in 2012, Daily Maverick’s veteran journalist Greg Marinovich was the first journalist to report that the majority of the 34 miners shot dead by police at Marikana on 16 August were killed out of public view “at a nondescript collection of boulders some 300 metres behind Wonderkop”.

Writing on 8 September 2012 Marinovich noted he was with City Press’s Charl du Plessis trying to fill in some of the gaps in their understanding of the tragedy that shook democratic South Africa.

“While clambering some four metres up on a boulder, Du Plessis found a stick and a pipe. Nearby were bloodstains. Then, precariously close to the edge, he spotted a bullet. A bent and scraped bullet that looked very much like an R5 bullet. It had obviously ricocheted once or even twice off the granite.”

Marinovich and Du Plessis alerted the Independent Police Investigative Directorate, which sent investigators within a couple of hours, as well as a specialist crime scene investigator.

“None of these events were witnessed by media or captured on camera. They were only reported on as component parts in the sum of the greater tragedy,” Marinovich wrote at the time.

On 1 June 2021 Pretoria High Court Judge Natvarlal Ranchod finally dismissed, with costs, former national commissioner Riah Phiyega’s attempt to set aside the findings of the Marikana Commission of Inquiry, chaired by retired Supreme Court of Appeal Judge Ian Farlam, into 44 deaths at Lonmin mine in August 2012.

Ranchod dismissed the application with costs including those of two counsel. Phiyega launched her application for review more than 12 months after the report was published in 2015. Phiyega had hoped the SA Police Service (SAPS) would pay her legal costs.

While 34 miners were shot and killed on 16 August, the death toll included two police officers, three non-striking miners, two Lonmin security guards and three striking miners who were killed a week before the massacre.

Phiyega was suspended in October 2015 and remained on full pay with all benefits until her term of office came to an end on 31 May 2017. The final tally to the taxpayer amounted to R3.2-million.

After the release of the Marikana Commission’s report, then-president Jacob Zuma set up the Claassen Board of Inquiry (chaired by Judge Neels Claassen) into Phiyega’s fitness to hold office as recommended.

The Claassen inquiry also investigated whether Phiyega was guilty of misconduct in attempting to mislead the commission.

In the end, Phiyega was found not fit for office and the Claassen inquiry accepted evidence that the national commissioner had edited a report, removing from public knowledge evidence of the killings at the “second koppie”. These killings had initially been included in her report to Zuma.

This had constituted a “breach of her duty to manage and control the police in an honest and transparent manner”.

While the Claassen inquiry had found that Phiyega had not misled the Marikana Commission in certain respects, “she did so in other respects”, said Ranchod.

With regard to the murders at the second koppie, the commission found that Phiyega, in her media statement, “had created the impression of only one shooting incident and the most reasonable conclusion is that the report which had been prepared for the President was deliberately amended in order to obscure that there had been two shooting incidents separate in time and space, and that this resulted in deliberate misleading of the public, who were brought under the impression that all of the deaths had been caused at the confrontation at scene one which they had seen on television”.

The commission also found that the leadership of the SAPS “at the highest level” had not provided a true version of how the “tactical” option had been implemented on the afternoon of 16 August 2012.

Leadership had also tried “to conceal the fact that the plan to be implemented was hastily put together without POP [Public Order Police] inputs or evaluation”.

This decision, said Ranchod, had not been disclosed to the commission, an inaccurate set of minutes had been prepared for a meeting and there had been a prima facie case that the national commissioner and the provincial commissioner for North West, Lieutenant-General Zukiswa Mbombo, knew the true facts.

“The appointment of a commission of inquiry constitutes executive action, not administrative action,” said Ranchod.

The president had not been required to consult with the subject matter of the inquiry before appointing a commission, he added. The function of a commission of inquiry was to determine facts and to advise the president through the making of recommendations.

“A commission of inquiry is not a court. It is entitled to receive evidence or information relevant to the issues before it. It may receive evidence of any nature, including hearsay evidence and newspaper reports, and it may even receive submissions and representation that are nothing more than opinions,” said Ranchod.

Phiyega had mounted a three-pronged attack but, said Ranchod, “two of the three attacks are academic on the bases of mootness and preemption”.

Only “a small residue” of Phiyega’s case and the relief she sought was “still alive”, he added.

The Claassen inquiry, said Ranchod, had confirmed the Marikana Commission’s finding that Phiyega’s “deliberate attempt to mislead South Africa by amending the media statement to read as if the tragic incident only occurred at scene 1 where police acted in self-defence is not in keeping with the duties commensurate of her office”.

The Claassen inquiry also concluded that Phiyega had not concealed from the Marikana Commission “in her initial testimony” the fact “that a decision was taken during the evening of Wednesday, 15 August 2012 to effect the disarming and dispersal of the strikers the next day on Thursday, 16 August 2012”.

It had also analysed all the evidence and had concluded that Phiyega “was not a satisfactory witness in all respects”, and that she had been “ambivalent and contradictory on the topic of whether or not the tactical option was discussed”.

She had also attempted to avoid taking responsibility for the conduct of the police by denying that she had taken the decision to use deadly force.

This, said Ranchod, had tainted Phiyega’s evidence and had placed her credibility in “serious doubt”.

Phiyega’s self-exculpatory argument “was disingenuous and somewhat facile” added the judge. And while Phiyega had stated her intention to take the Claassen inquiry’s report on review, “no further details” were provided, said Ranchod.

In any event, said the judge, if Phiyega intended to pursue this course “then even more so, it seems to me, the present application is doomed to failure”.

The Claassen inquiry had resulted from the recommendations of the Marikana Commission.

“Hence the recommendations have been rendered moot as they have been acted on by the fourth respondent [the president].”

Phiyega’s lawyers had argued that the mootness should be overlooked “on the basis of an alleged high public importance nationally and internationally, of the tragic incident that occurred at the Lonmin mine in Marikana”.

The difficulty he had with this argument, said Ranchod, was that “it is inconsistent with the express basis on which the application was brought. It was not brought in the public interest”, but in Phiyega’s personal interest.

Phiyega, said Ranchod, had conflated three issues: the public interest, issues interesting to the public and her private interest.

Nowhere in her papers “is any discrete legal issue of public importance alleged to arise that would affect matters in future”.

Phiyega had premised her review on the legality and rationality of the Marikana Commission’s recommendations, stating these were irrational as they had not been supported by evidence.

However, said Ranchod, Phiyega had “failed to establish any basis for criticising the correctness of the Marikana commissioner’s report”. DM