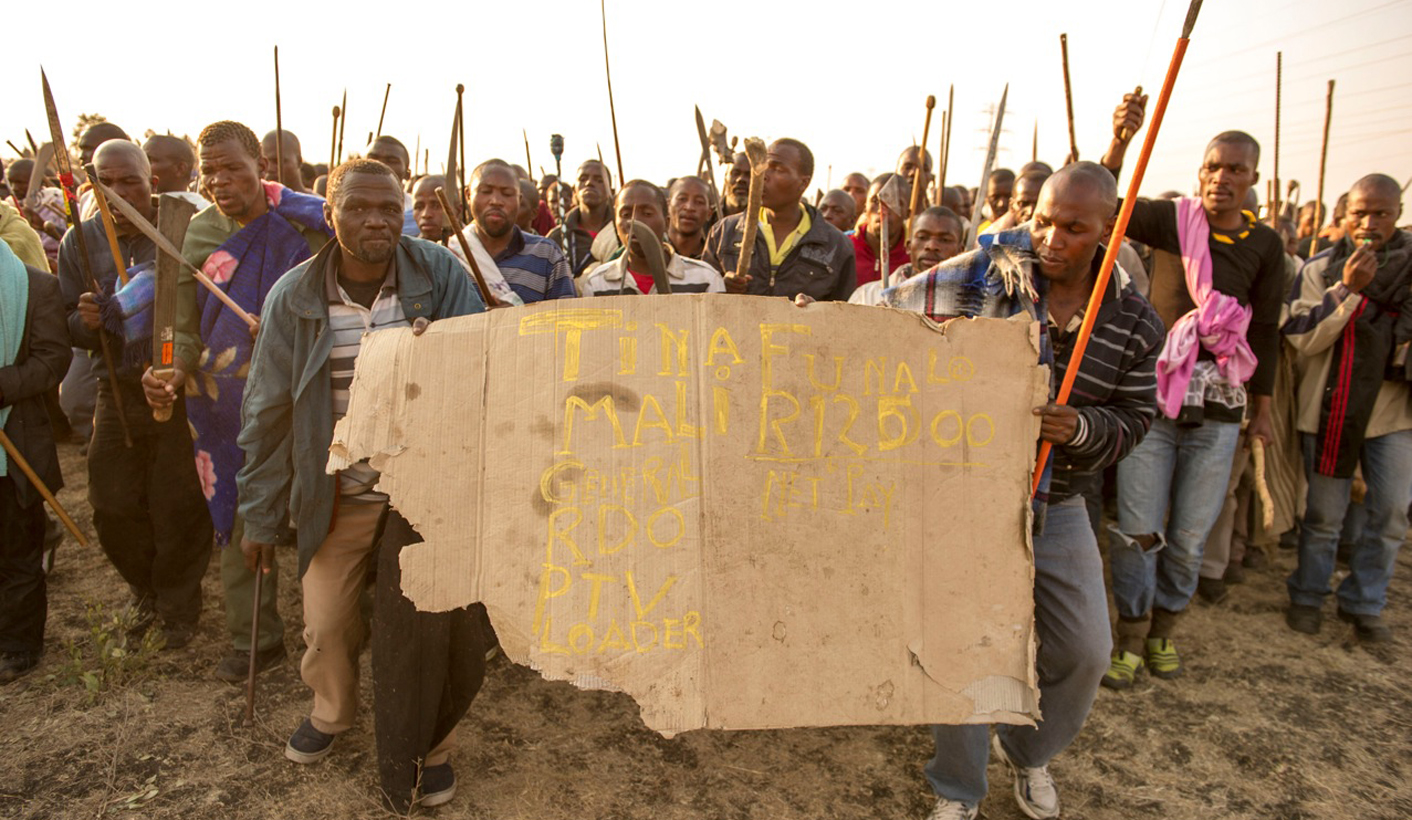 Since the publication of the article positing that police had murdered some of the miners at the Small Koppie, individuals close to various arms of the investigation have approached us, verifying the main thrust of the argument. We can now confirm the frightening details: 14 dead at the Small Koppie, 300 metres away from the better known massacre, minutes after the much-televised stampede. Yes, we were disturbed, too. By GREG MARINOVICH.

The unseasonal heat baked Nkaneng settlement on Friday, 31 August. Litter was strewn across the empty veld like peculiarly ugly wild flowers. In the distance, thousands of denizens waited patiently outside Lonmin’s Marikana plant for their turn to board a minibus taxi or a bus for a grim trip to the Eastern Cape or Lesotho. The majority of the slain miners were Pondo speakers, to be laid to rest in remote villages there, most of them over the weekend.

Next to the squat cone of Wonderkop, a sparkling white hearse made its way along the rutted dirt road that circles the hill. Eventually the hearse halted; it could drive no further. The rear door was opened, as if to give the corpse a breath of fresh air, and the handful of men who had followed the vehicle continued on foot.

The group approached Small Koppie, and passed by a large patch of blood that someone had fenced with branches. An open container of snuff lay in the centre. It was an offering to the ancestors by relatives and colleagues who had earlier come to take the slain miner’s spirit to accompany the corporeal remains home. It was here that crime scene investigators had named two bodies A and B.

Passing the bloodstains of A and B without breaking stride, the group of mourners swiftly climbed over the largest of the granite extrusions, leaving behind several spray-painted yellow dots, the meaning of which I could not discern.

They eventually stopped at a nondescript patch of earth. This was where Lonmin rock drill handler Andries Motlalepule Ntsenyeho died, aged 42. The earth showed no yellow paint markings, nor letters to demarcate key evidence or bodies. I myself had unknowingly walked over this spot several times.  A man gathered soil and gave it to Ntsenyeho’s younger brother, Tebogo, to put in a crumpled white plastic bag. Then they lowered their heads and prayed quietly.

(There are two logical layman’s possibilities to this apparent oddity of no spray paint showing where Andries Ntsenyeho had died: that this is not where he died, or that the spray paint on the sand has been walked over and weathered in the two weeks since the scene was investigated. The third possibility is that the esoteric requirements of the crime scene investigators do not need to put paint next to bodies lying in the open, where they are easily detected in an aerial photograph, and matched to GPS co-ordinates.)

I was at Small Koppie with CityPress’s Charl Du Plessis. We wanted to try to find the missing letters and fill some of the gaps in our understanding of the tragedy. While clambering some four meters up on a boulder, Du Plessis found a stick and a pipe. Nearby were bloodstains. Then, precariously close to the edge, he spotted a bullet. A bent and scraped bullet that looked very much like an R5 bullet. It had obviously ricocheted once or even twice off the granite.

We called the Independent Police Investigative Directorate, IPID, who sent investigators within a couple of hours, as well as a specialist crime scene investigator.

It was instructive, and morbidly fascinating to watch: the site of the bullet was logged and contextualised with regard to the other forensic markings. The blood was swabbed and samples taken, to see if they matched any of the bodies.

The police trio would not be drawn out on any of the evidence (so ungrateful of them, really, after we had found them the bullet). They did not need to. Photo: One of the markings indicating where a miner died. The critical letter N was incorrectly marked: it should have been the letter M. (Greg Marinovich)

Since the publication of the article positing that police had murdered some of the miners at the Small Koppie, individuals close to various arms of the investigation have approached Daily Maverick, verifying the main thrust of the argument.

Our reliable sources tell us that only one firearm was found at the scene – a pistol – at F. We have subsequently found that the demarcations go up to the letter X and that some of them show where bodies lay. G and H were indeed two miners who died next to each other, as were E and D, and J and K. X, too shows where a body lay.

The critical letter N was, however, incorrectly marked: it should have been the letter M. The file might reflect M for the position marked N on the rock. This is something that could have led to a lot of confusion, clouding events, making justice elusive. Whatever the crime scene error, the rock marked N above the pool of blood indeed does mark a body. And thus miner N (or M) did die there, trapped. The rocks and trees round him bear no sign of bullet marks. He was not killed in a wild spray of bullets.

And now, for the main point: There were indeed 14 corpses found at Small Koppie, including that of Andries Ntsenyeho. We have been told that many of the corpses were shot in the back. Some of these corpses apparently had three bullet wounds in a close grouping. These point to the miners being shot at close range by automatic gunfire. There are precious few rocks that display bullet marks. I counted less than ten, rendering a theory of spraying of the area with long-range bullets a lie. Ntsenyeho had three wounds, one in the neck and two in the groin area.

So did the police, as they were attacking Small Koppie, think they were in danger from the trapped miners? Only the one handgun was found at the scene, at F. Despite this, the police could have believed they were in danger, if they went in on foot. Yet large tyre tread marks and small trees pushed over at one of two possible entries into the central clearing, where several bodies were found, indicate that armoured Nyalas could and did indeed enter. It is not clear when they did, but they could have ferried the police into the clearing on that fateful afternoon, and been able to afford the police protection.

We have eye-witnesses who saw Nyalas encircle Small Koppie in the events that followed the televised shooting at Wonderkop, some 300 meters to the southeast. Complete physical protection was available to police involved.

The police were either not in extreme danger, or could have chosen not to be in danger. This may have been personal choice or an order from their commander.

And this begs the question: What where police doing using deadly force and moving into the Small Koppie anyway? What was their aim? The police state that their aim on the day was to disperse the miners. This had already been achieved by the time Small Koppie was attacked. If they wanted to arrest those who might possibly have been involved in the killing of three miners, two security guards and two police officers in the previous days, they would not have ended shooting 14 people; the miners were trapped already. If the bringing to book of potential killers, alive, were on their mind, no assault rifles need have been used.

So what was on their mind, if I may collectivise this, following the recently much-used logic of common purpose?

In the days following the hacking to death of the two police officers, gruesome cellphone pictures were circulated throughout police circles. Policemen around the world view the killing of their own with extreme anger. We are informed by the comments that range from Bheki Cele and Susan Shabangu’s shoot to kill statements, to current police commissioner Riah Phiyega’s following the massacre, that the policemen at Marikana had done no wrong.

In the afternoon heat of 31 August, the handful of family and fellow miners of Andries Ntsenyeho swiftly made their way back to his coffin. I asked if they had seen the autopsy report. His brother Tebogo answered that they had the death certificate: “It only says that he died of unnatural causes. Nothing more. We have many questions.”

As do we all. But the true story of what happened on the Small Koppie on 16 August 2012 is out there and, every day, we’re getting closer to it. DM