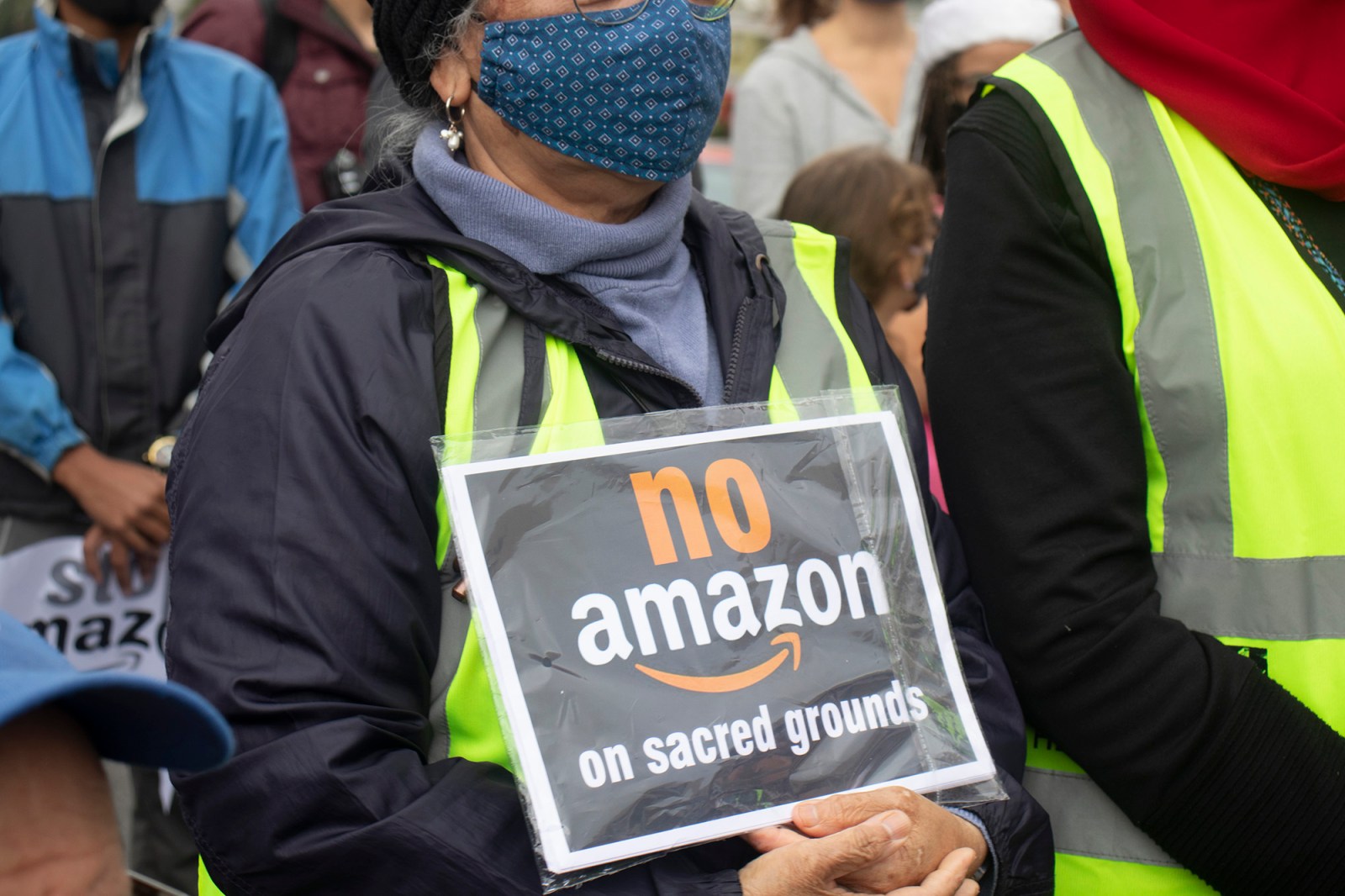 Marchers have over time called for the R4.5bn River Club development in Observatory, which will include Amazon’s offices, to be halted. (Photo: Karabo Mafolo)

While some may be excited to see the development of Amazon’s headquarters in Cape Town, on 16 June a group protested against the development, gentrification and colonial statues.

In front of the vibrantly painted houses of Bo-Kaap, a group of about 50 people gathered in song and dance to commemorate the June 16 public holiday as well as to start their “walk of resistance” against colonial statues and the R4.5-billion River Club development which will include Amazon’s headquarters in Observatory.

The crowd, a mixture of young and old people of all races, carried various placards with statements like “F*ck Jeff Bezos” and “it’s a floodplain, you idiots”.

The River Club property, the site of Amazon’s headquarters, will “result in infilling a floodplain, permanently erasing the original course of the Liesbeek River and constructing buildings up to 11 storeys high on an area recognised as significant to First Nations,” wrote Steve Kretzmann.

“I’m feeling very sad because it’s been [almost] 30 years in our democracy and we still need to demonstrate against housing and land. But we also need to remember that this area is where resistance started, we have a history of resistance [in Bo-Kaap],” said Fouzia Achmat, the vice-chairperson for the Bo-Kaap Civic and Ratepayers Association.

The masked crowd walked from Bo-Kaap to the Iziko Slave lodge in Wale Street towards Parliament, then down Adderley Street towards the Jan van Riebeek statue.

Standing beside the statue of Jan Smuts, Gertrude Fisher said that the youth of 1976 needed to be commemorated as well as the youth of 2015, who led the Rhodes Must Fall movement. “Now, we’re standing next to this statue and we’re saying to Smuts, your time has come,” said Fisher.

Two young people climbed on the Smuts statue outside Parliament and covered its head with a blue plastic bag while the group cheered.

Speaking to the crowd, Imam Rashied Omar said, “Our struggles are intersectional; you can’t want to fight for the Palestinians and not the South Africans… all these struggles are linked”.

The group then walked down Adderley Street and stopped near the flower sellers. “They’ve been here for so long and the city is trying to make it even harder for them to do their work, so we also need to be in solidarity with them and their challenges,” said Jacky Poking, Bo-Kaap Civic and Ratepayers’ Association spokesperson.

Then they moved to the Jan van Riebeeck statue, where a man shot an arrow at the statue. Tauriq Jenkins from the Goringhaicona Khoi Khoin Indigenous Traditional Council called on President Cyril Ramaphosa to remove colonial-era statues. No memorandum was handed over, and the group dispersed shortly after. DM