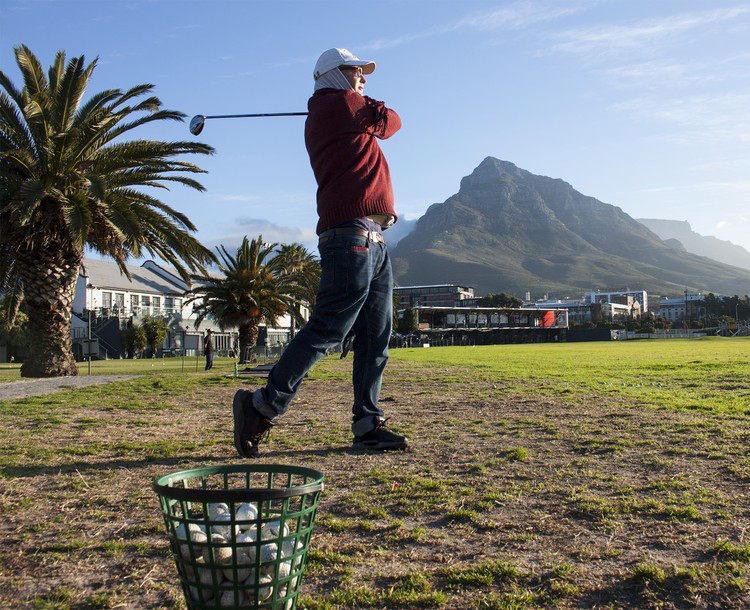 The River Club, currently a nine-hole golf course, is to be rezoned and will house new headquarters for giant multi-national company Amazon after a decision by the City’s Municipal Planning Tribunal on Friday. (Photo: Steve Kretzmann)

A city tribunal has made way for Amazon to move in to the River Club development in Cape Town. Buildings up to 11-storeys high are to be constructed on a First Nation site. The rezoning was decided in the face of 180 heritage and environmental objections.

The rezoning of the River Club property in Observatory, to allow a R4.5-billion mega-development – including headquarters for Amazon – was given the go-ahead by the City of Cape Town’s municipal planning tribunal on Friday 18 September.

Friday’s decision to rezone the area from open space to business designations, came in the face of 180 objections from civil society bodies, activist organisations, First Nation groupings and individuals.

The development will result in infilling a floodplain, permanently erasing the original course of the Liesbeek River and constructing buildings up to 11-storeys high on an area recognised as significant to First Nations.

An Environmental Authorisation, which is a requirement for rezoning, was granted by the Western Cape Department of Environmental Affairs and Development Planning on 20 August. But there were 40 objections, and an appeal process is underway. The deadline for appeals to be lodged was 10 September, and among the applicants are the City’s own environmental management department and Heritage Western Cape, both of whom say the province’s decision violates provisions of the National Heritage Resources Act and the National Environmental Management Act.

But just eight days after the deadline, and without sight of the environmental authorisation appeals, the City’s municipal planning tribunal decided to rezone the site at the confluence of the Black and Liesbeek Rivers. The tribunal chairperson, David Daniels, favourably compared the proposed development to Century City.

Development on the 14.8ha River Club site, which is owned by Liesbeek Leisure Properties Trust and currently features a nine-hole golf course, pub, conference venue and golf shop, has faced sustained civic opposition since the trust submitted a notice of intent to develop in July 2016.

The land is in the Two Rivers Urban Park, seen to be South Africa’s first site of colonial dispossession by the Dutch as they forced the Khoi from their ancestral grazing lands.

In a bid to temporarily halt development in order to assess the heritage significance of the land, Heritage Western Cape invoked a two-year provisional protection order on the site in April 2018. This was appealed by the developer, backed by the City and two provincial departments. The appeal was rejected by the provincial appeals tribunal. The two-year period of the protection order has since lapsed.

The municipal planning tribunal on Friday stated it had not considered Heritage Western Cape’s, nor the City environmental management’s own 20-page appeal (excluding annexures) against the environmental authorisation on environmental and heritage grounds.

More than one objector noted in their presentations that this gave the impression the tribunal was taking advantage of the environmental authorisation to push through the rezoning of the site.

Observatory Civic Association chairperson Leslie London, in his presentation, noted a number of issues which brought “procedural justice” into question.

London said since the initial advertisement for rezoning two years ago, Liesbeek Leisure Properties had inserted new information dealing with “substantial changes” to its application. London said there were eight new reports, but the tribunal did not allow appellants to provide new information, such as the appeals that have been lodged against the environmental authorisation.

He said in order to make a fully informed decision, the tribunal needed to have sight of the appeals, yet appellants were not allowed to put this information before the tribunal.

London said the developers had been allowed to introduce a response by “the applicant’s heritage expert” dated 31 March 2020, “but bizarrely the actual Heritage Western Cape final comments”, which were issued on 13 February 2020 and rejected the developer’s heritage impact assessment, was not included in documentation before the tribunal.

The tribunal “will misdirect itself if it is not provided with all the relevant information pertaining to this decision”, said London.

In the prelude to the tribunal hearing, one of the five tribunal members – who was not identified on the Skype broadcast – said the tribunal did “accept and understand and must accept that the environmental and heritage aspects are very important”. These aspects “will have to carry quite a considerable weight in the assessment”, the tribunal member said.

But in the final summation, Daniels rejected the environmental and heritage appeals presented.

He said the findings of the tribunal were unanimous. “I think there are more positives than negatives” regarding environmental impact, he said.

He said with “the conservatism you see around us today I wonder if our environmentalists would ever have approved that wonderful restaurant at the tip of Cape Point that sits on the edge of a cliff, or that viewing deck we approved on the top of Table Mountain. You would struggle to get that approved now”.

He said none of the objections brought to light any conflict with the 2018 Metropolitan Spatial Development Framework, which is the planning policy the tribunal considered applicable.

“I think it (the River Club development) will be a destination like Century City is a destination,” said Daniels.

He was very impressed that Liesbeek Leisure Properties had secured Amazon as an anchor tenant. “That’s a major, major breakthrough for the economy of the Western Cape and for the brand of Cape Town. I think it’s a big deal.”

Liesbeek Leisure Properties Trust spokesperson, Jody Aufrichtig, called the decision an “unequivocal victory for the people of Cape Town” and a “major milestone in a comprehensive, open and transparent development approval process”. DM