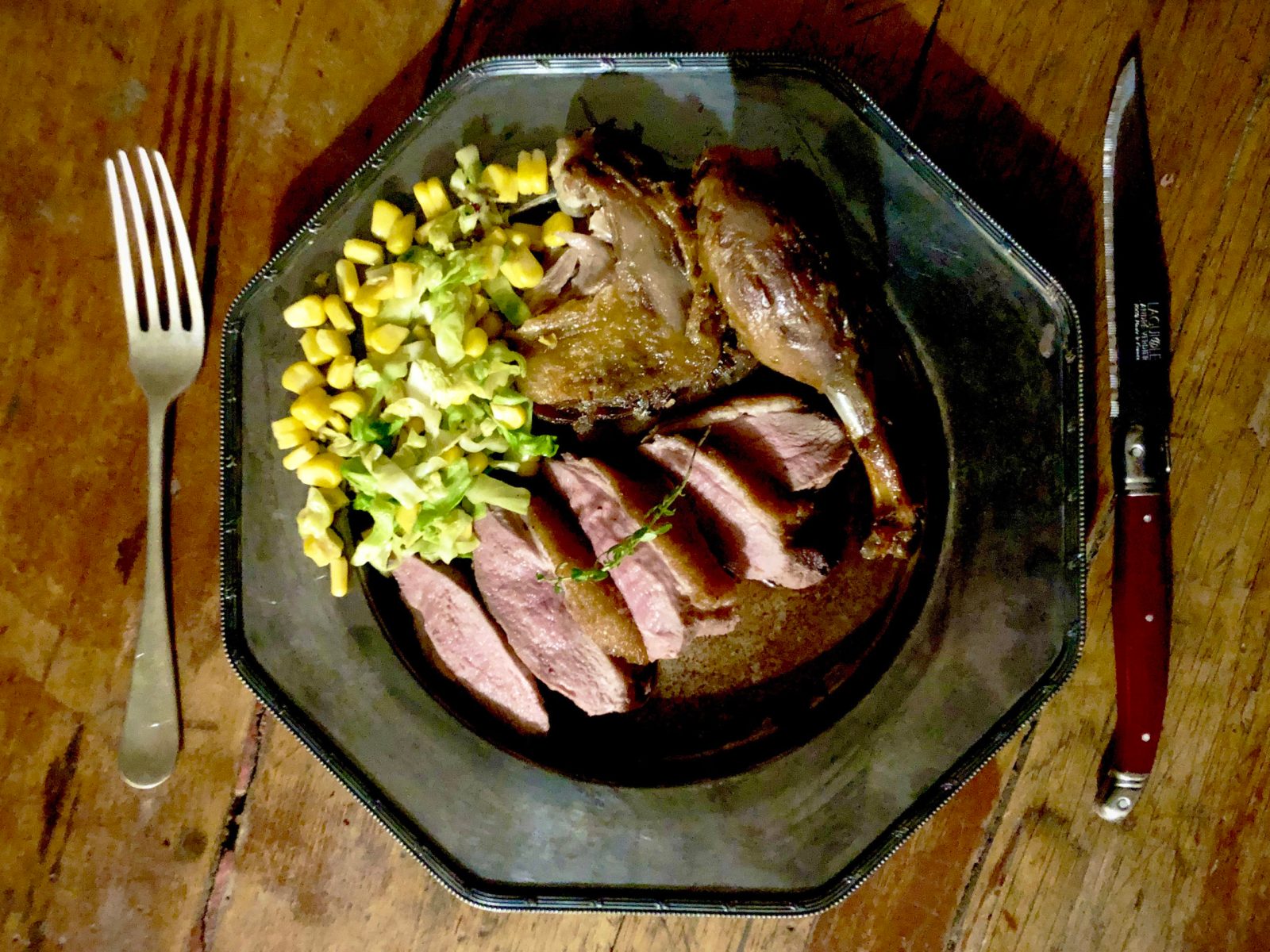 Serving these two distinctively different styles of duck on one plate shows off the bird’s versatility in the kitchen.

To describe the process of making a confit duck leg as slow would be an understatement. It needs at least three hours’ cooking at an extremely low heat. This after many hours of curing in the fridge.

The cut of duck generally described as a leg is in fact the leg and thigh quarter, but not including the wing. I generally use the wing for stock, along with the carcase after trimming away the breast. And any other bits and pieces left over. You can never have too much meaty flavour in a meat stock.

As must be clear by now, I started with a whole bird, because that’s how we roll in small towns. If you’re in the city, you’ll most likely be able to find duck breast and leg portions having been neatly cut for you. If you’re breaking down a whole bird yourself, just remember two key rules: follow the bone, follow the joints. You need a boneless breast with the breast skin on, and a neatly trimmed leg and thigh portion.

I haven’t written an ingredients list because it would consist of little more than “1 duck”. So here’s the method instead… oh, and you’ll need lots of time. At least 9 hours. So you could start the night before.

Chop several sprigs of thyme (just the leaves) and mix with a similar amount of coarse salt. You need about 3 Tbsp in total for two leg joints. Rub this into the (cleaned and dried) leg joint/s. Put it in the fridge for 6 hours or overnight. This cures the meat. Remove from the fridge and bring to room temperature.

Preheat the oven to 120℃ or thereabouts.

Rinse the leg joint/s and pat dry. Place in a deep oven dish and into the oven. Leave it for at least three hours, by which time all of its fat should have rendered.

Cool it in this fat. Experts say that it can keep in the fridge for up to six months.

When you’re ready to cook it, remove it from its fat and (if you’re making the dish I describe above) pan fry it to crisp up the skin. But first cook the breast.

The breast (skin-on, remember) needs to be scored (carefully so that you don’t pierce the flesh, only the skin) and fried skin-side down until it is cooked almost to the middle. Then turn it and cook the other side for a minute or two, salting it lightly all over. It should be pleasingly pink in the middle, but not bloody.

I accompanied it with shredded Savoy cabbage and blanched corn, both of which I quickly tossed around in the rendered fat the duck had been fried in, just for a minute. DM/TGIFood