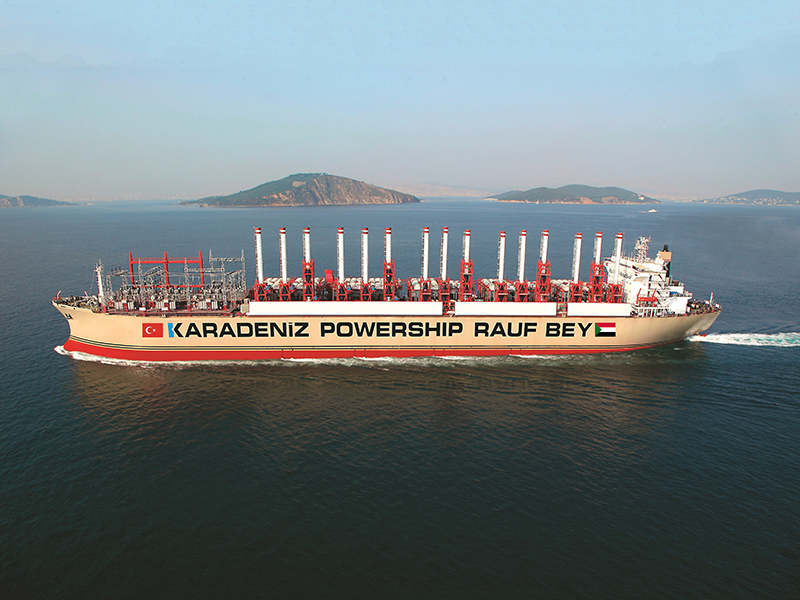 The Turkish emergency powerships deal has run into a submerged regulatory obstacle, with the Department of Forestry, Fisheries and Environment Department suspending the environmental impact impact (EIA) process for the Saldanha Bay component until further notice.

The halt in the approval process, which came to light at the weekend, follows a formal complaint by the Green Connection non-governmental organisation, which alleges that Karpowership consultants breached the EIA Regulations by failing to conduct a thorough assessment on the underwater noise impacts of floating powerships on fishing and the marine ecology of Saldanha Bay and the nearby Langebaan Lagoon, islands and aquaculture development zones.

With barely six weeks to go to a crucial deadline for final approval, it remains unclear whether this could sink the Saldanha Bay harbour power proposal and also stir up similar objections for two other major harbours. However, it is expected to lead to a significant delay and open the way for further legal challenges that could potentially prevent the Turkish-led consortium from meeting the July 31 deadline for financial closure as a preferred bidder under the government’s Risk Mitigation IPP Procurement Programme (RMIPPPP).

Two months ago, Karpowership won the bulk of the RMIPPPP bid, to generate up to 1,220MW of electricity via several gas-burning floating power stations moored for 20 years in the ports of Richards Bay, Ngqura and Saldanha Bay.

In response to queries, Karpowership said the environmental assessments submitted to the department were “robust and compliant” and the company was confident that the suspension would be lifted “to allow us to move on with the process”.

“You are hereby informed of the Department of Forestry, Fisheries and the Environment’s [DFFE] decision to suspend the application for authorisation and associated timeframes due to allegations made by Green Connection. The extended timeframe for the processing of the application will be communicated once a decision on the matter has been reached in terms of Regulation 14 [5] of the EIA Regulations.”

This sub-regulation empowers the department to appoint an external reviewer, or an entirely new and independent practitioner to “redo any specific aspects of the work done” by Plomp’s Triplo4 consultancy and associated specialist reports.

Announcing the names of the preferred bidders on March 18, Mineral Resources and Energy Minister Gwede Mantashe said all bidders were required to reach financial close by no later than July 31.

“Due to the urgency to bring power online, this date is not negotiable. It is for the preferred bidders to manage all the risks to reach financial close,” Mantashe’s department said.

Green Connection spokesperson Liz McDaid, who played a key role in derailing a $76 billion SA government nuclear deal with Russia in 2017, sent a formal complaint to Creecy’s department on May 30, calling for the EIA approval process for Saldanha to be put on hold on the basis that Triplo4 failed to conduct an adequate specialist study of the potential impacts of underwater noise on the environment and marine resources of Saldanha Bay “in particular those on which small-scale fishers of Saldanha Bay depend for their livelihoods”, prior to submitting a final EIA report to the department.

According to McDaid, an underwater noise study was conducted three months ago in the vicinity of a Khan class floating power station in the port of Takoradi, Ghana, during which sound measurements of between 112 and 99 decibels were recorded.

“It should be borne in mind that the Karpowership power generating ship will be stationary and generating noise for 24 hours per day, close to the breeding grounds of juvenile fish for a period of 20 years.”

This differed significantly from other large ships which moved around local harbours almost continuously as they delivered cargo, but not spending extended periods of time producing noise at the shoreline.

Any comparisons of the tolerance of fish to noise from other large vessels provided in the local EIA was therefore questionable, especially because the Ghana study did not take into account the unique topography of Saldanha Bay.

Our environmental impact assessment on Saldanha Bay was suspended by the department pending a review. This is a direct result of complaints laid by Green Connection, an environmental lobby group that is opposed to all thermal power generation projects regardless of its impact to South Africa’s economy and energy future.

“Interested and affected parties, in particular small-scale fishers, whose livelihoods could be affected, have been deprived of a specialist assessment prior to the approval being granted, of what could, over 20 years result in a significant impact of the project on their livelihoods, and which assessment is required in terms of the applicable legislation.”

Green Connection also referenced several independent studies in other parts of the world which suggest that underwater noise from shipping and other human activities has a number of adverse effects on aquatic life including death, injury, permanent or temporary hearing impairment or behavioural responses that may disrupt important life functions. With longer exposures, chronic effects could disrupt feeding and reproduction.

“Saldanha Bay acts as an essential nursery habitat for many fish species due to its nutrient-rich waters. Juveniles are considered more susceptible to noise disturbances as they are less mobile, while adult fish [and marine mammals] can move out of affected areas.”

“The South African public should not be hoodwinked into thinking that the promise of further studies into impacts [after authorisation] constitutes mitigation measures. The sad fact is that the proper studies on the impact of noise were not conducted, and for consultants to suggest that further studies [after the fact] will address this concern and that the risk is ‘likely to be low’, is completely unacceptable,” said McDaid.

Should similar underwater noise concerns emerge over the Richards Bay and Ngqura studies, this could translate into further delays for the entire Turkish-led project.

The Richards Bay Clean Air Association has also submitted a separate complaint to the department asking that the EIA process be put on hold immediately on the basis that a substantial volume of additional information was included in the final EIA report – but without allowing interested parties to interrogate or to comment on this additional information.

“It looks like it’s one down and two to go,” she said, urging the department to also suspend the Richards Bay assessment and afford local stakeholders another 30 days to interrogate the new information in the final report.

Apart from widespread public criticism around the estimated R200- billion price tag for the 20-year gas-to-power plan, Karpowership faces a separate criminal investigation into allegations that the company or its consultants provided “misleading information” to Creecy’s department last year in an attempt to bypass the EIA process.

The department told the amaBhungane Centre for Investigative Journalism that the Green Scorpions investigation was tasked to establish “whether or not prima facie evidence exists of the commissioning of an offence”.

“Should prima facie evidence exist of an offence, the department will bring the relevant information to the attention of the South African Police Service for further investigation and/or the Director of Public Prosecutions to commence a prosecution … If the outcome of the investigation reveals that there was something untoward about their conduct, then that would have a material effect on the current EIA applications under review by the department.”

“Our environmental assessments as submitted to the department are robust and compliant, we are confident in them, and we believe this investigation will conclude with the lifting of this suspension to allow us to move on with the process. The bottom line is we are eager to get to work setting up our projects, generating electricity, helping alleviate the problems of load shedding, and supporting the wider local economies and South Africa whilst mitigating countrywide load shedding.

“There is a June 30 deadline for us to respond, however we intend to reply as soon as possible. We trust that this can expedite the process and allow us to move forward in line with the original timeframes as set by the terms of the RMIPPPP. We remain fully committed to this project and are eager to get to work generating reliable electricity for South Africa.”

O’Driscoll said he was not aware of the Richards Bay Clean Air Association objection. DM

The headline and blurb were amended following original publication, to clarify that it was the Minister’s department that suspended the process, not the Minister herself.