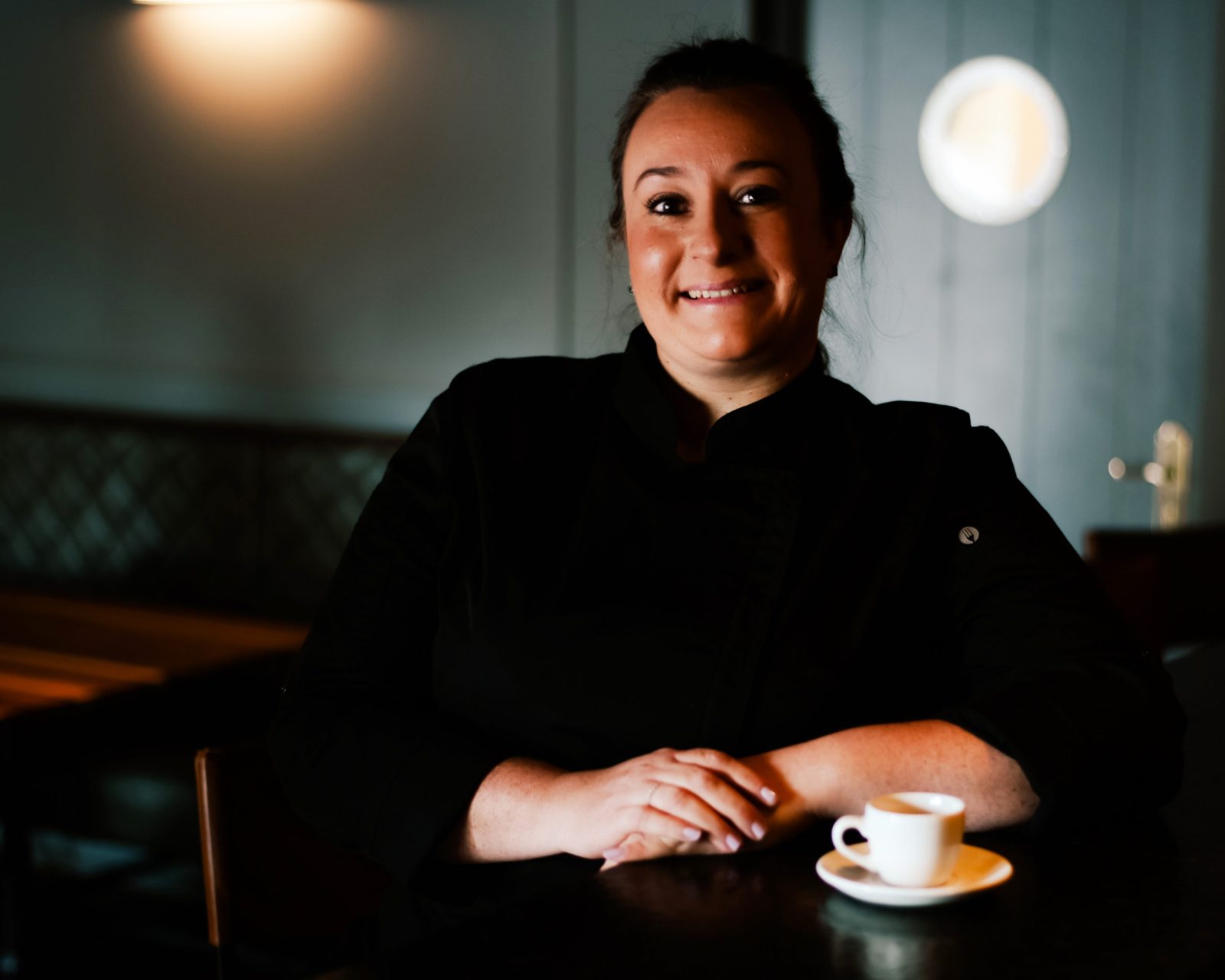 Chef Candice Philip manages it with no hair out of place and a geisha demeanour. (Photo: @daria_higgins_images)

Late in 2020 Vicky and James Peech perfected a pop-up revolution trend. They’d noticed how some of our best chefs had come unstuck from their restaurants and staff. They blessed them with their new and classy Basalt restaurant.

It’s one of the dishes I’d planned to eat, having pre-examined the current tasting menu with unusual excitement. Just named Tomato, I was put in mind of one called that at Pretoria’s Mosaic restaurant shortly after it opened. It had been served on a long thin dish with various tomato presentations laid along it, before Chantal Dartnall’s high-floral platings period. It is nothing like what I’m eating. This is a dish by individualistic chef Candice Philip.

It looks simple and whimsically pretty in a round bowl but this is a dish of solid taste cunning. It contains the knowledge and practice of how far to stretch flavours, whether they meld intensely or play supporting roles. My spoon takes up some of the underlying smoky tastes from smoked tomatoes, then collects some of the overlying Parmesan cream, smooth, balanced, adds a stud of semi-dried tomato flesh on the way, a bit of babaganoush flavour and basil that has crept in along with wonderfully crunchy toasted barley and lentils. It is something so deliciously different and well resolved that I want to applaud. Of course I eat it all, even scraping the sides of the bowl, to Vicky Peech’s amusement.

We’re in the not-two-years old fine dining restaurant at Vicky and husband James’ Peech Hotel in Melrose North. A fire blazes in the deep basalt-grey-painted hall-restaurant. Chef Candice walks in from the kitchen, seeming slightly shy. I think she’s really quite amused by life and crazy about what she does but she manages all that with no hair out of place and a geisha demeanour.

One year ago the Saxon shut down for Covid-19 reasons and chef Candice had to close Grei, her beautiful restaurant there that featured her own special ways with ingredients. It’d only been open for eight months when Grei was nominated for The World’s Leading Fine Dining Restaurant. The following year it was selected as one of the World’s 50 Best Discoveries by The World 50 Best Restaurants. The next year Covid-19 struck.

Aside from Eat Out awards in the past, Gauteng, rich with its own excellent restaurants and chefs, has its ever-argued and discussed best-ofs. Among the “fine dining” top chef names one often hears those of Chantel Dartnall, no longer in South Africa but preparing to open a new incarnation of Mosaic in a magnificent chateau in France, David Higgs of Marble particularly, Ence Wessels of NCW, Marthinus Ferreira of DW11-13, Adriaan Maree of Fermier and this very chef, Candice Philip of, well, where?

Late in 2020 the Peeches, realising that many of our top chefs had come unstuck from their restaurants and their staff, perfected a food pop-up revolution trend where really great chefs could be reunited with their staff by popping up in their new and classy Basalt restaurant. It was madly popular too but people clamoured markedly for chef Candice Philip’s food again.

By now I’m eating another of my picks from the menu, linefish Ceviche. What it looks like is a juicy and green-creamy tangle, a yummy still life with delicate elderberry heads of “small star star-shaped flowers” as in Marita van der Vywer’s Evocative Power of an Edible Flower in TGIFood last week.

What it tastes of is freshness, the just-landed smack of juicily firm kabeljou, the popping-fresh trout roe, bits of lemon gel bursting more fresh flavour into it all, including chef’s own pickled kombu. Then this contrast of gently cushioning green pea-and-wasabi, a strangely comforting taste and texture.

After all these years, I still I don’t know how to talk to chefs about their real food perfections, so rare are they. I mumble some stuff about the kabeljou and chef Candice gives her sweet smile.

Vicky and I talk about chef Candice’s “three-month residency”. Basalt is open and featuring Candice Philip’s food from Thursdays to Saturdays, her six courses, which are really eight courses. They’re simply booked out. It’s phenomenal. People call and ask for “the next one” even before the menus change, not knowing what they’ll be, despite the new Covid-19 curfews.

What is certain is that no one wants to lose Candice Philip as quickly as three months time again. Not her hosts, nor her food fans.

Meantime I have been imagining how the dessert called Parsnip could or would be on the current menu. It turns out, to my fascinated delight, to be cheesecake where vanilla and parsnip meld together so artfully I can’t tell one distinctly from another and I’m quite palate-shocked by a new delicious flavour. The prettiness, like calyxes, is delicate crisps of parsnip but the hidden taste details, surprises to the mouth, are coffee gelato and tiny gels of whisky.

Vicky and I discuss, while having Philip’s cheese course, the list of the best chefs in South Africa put out by the Hospitality Counsel in November 2020. There are 10 chefs listed. Chantel Dartnall and Candice Philip are the only chefs there in Gauteng. We know Dartnall has gone. According to them, then, the top chef in Gauteng is, for the immediate future, the chef at Basalt. I should not be surprised.

What a deserving fillip for Basalt to be hosting possibly the best chef in Gauteng. As a result of all the good work the Peeches have done, helping chefs and bringing hearts and minds together over food, guests and chefs and their staff. DM/TGIFood

Throwback Thursday: The art of the cheese fondue