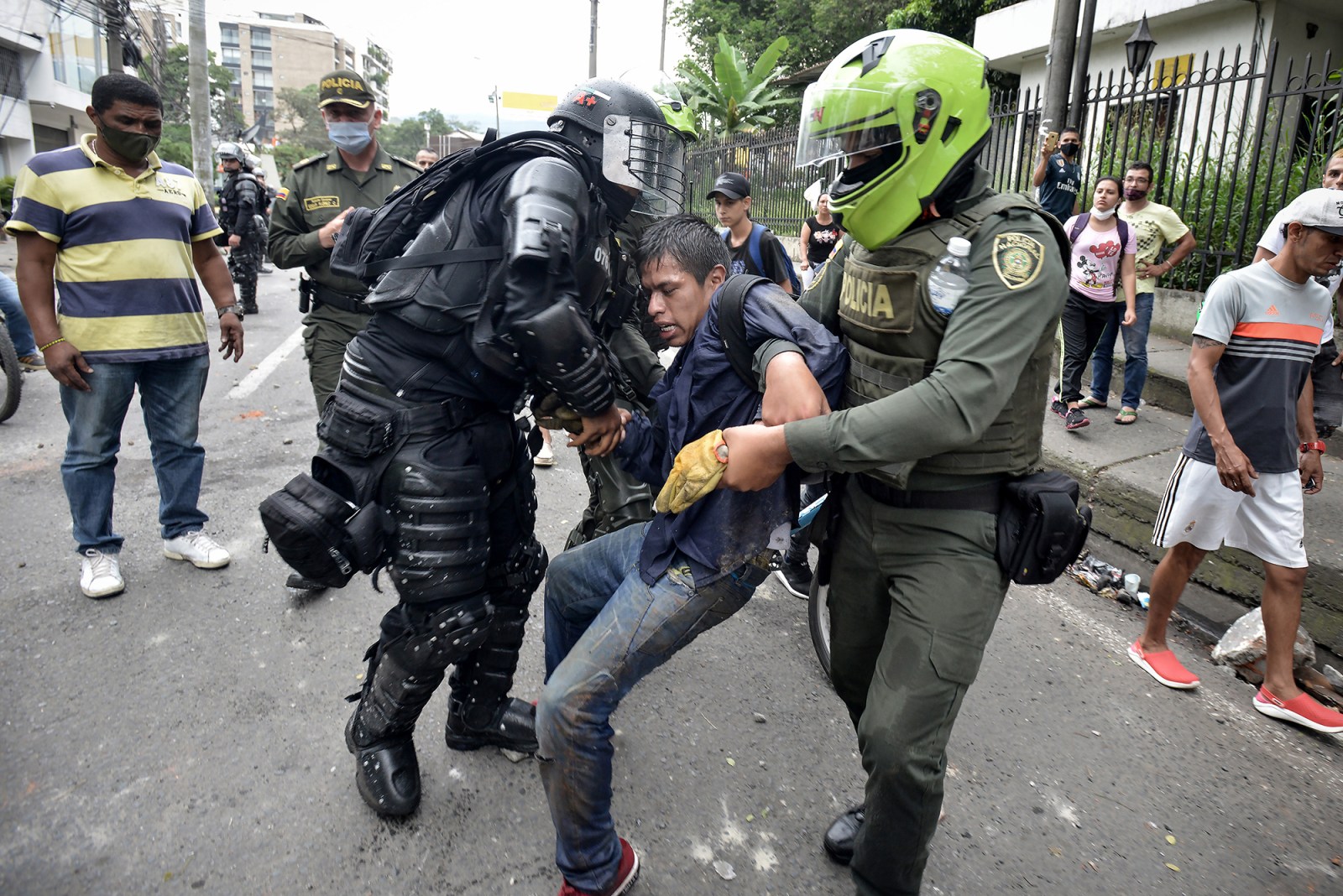 As protests in Colombia are met with deadly violence, Declassified reveals the UK’s National Crime Agency trained the Colombian police in a multimillion-pound five-year programme that is shrouded in secrecy.

The British government spent five years and £2.3-million training “specialist cadres of police” in Colombia, where dozens of protesters have been killed over the past month in a police crackdown on anti-government demonstrations.

The UK programme for the Colombian police, which ran until last year, included training in “advanced operational practice” for what are believed to be militarised units.

The training was run by the National Crime Agency (NCA), the UK’s secretive law enforcement arm that operates globally but which is shielded from the country’s transparency laws. The NCA would not confirm to Declassified if the training programme is still operating.

Since the beginning of May, protests which began against the government’s proposed tax reform have gripped Colombia, leaving 63 people dead, according to Human Rights Watch.

Amnesty International has reported “police repression of mostly peaceful demonstrations” in different cities across Colombia. It added that “police have used force indiscriminately and disproportionately, and there are alarming reports of sexual violence and disappearances”.

The president of Colombia, Iván Duque, who has been in power since 2018, represents the right-wing Democratic Centre Party (PCD) and is viewed as the chosen successor of controversial former president Álvaro Uribe.

Uribe founded the PCD in 2013 as a reaction against the negotiations then taking place between the government and left-wing rebels which sought to put an end to the long-running civil war.

The NCA programme in Colombia “engaged” with “Colombian law enforcement agencies to improve their capability”, according to UK government documents seen by Declassified. The aims included “specialist cadres of police to be trained in priority areas of intervention” alongside “trusted relationships formed with key units and individuals”.

But the NCA refused to disclose the names of these Colombian police units and individuals to us.

“Due to operational security, we are unable to divulge any information about individuals or units”, a NCA spokesperson told Declassified. This refusal also covered “the nature of the training delivered”, they added.

The project does not appear on the NCA website or in any of its public documentation.

The British documents further note the NCA “supported the training of specialised units” in Colombia on “advanced operational practice” alongside “intelligence collection methods”.

The NCA did not respond to questions about whether any of these police units have been involved in the recent protests in Colombia. “This is not a matter for the NCA”, its spokesperson told Declassified.

Britain has been supporting the Colombian police in at least two other projects. In a programme also running from 2015-20, the Crown Prosecution Service, the UK’s public prosecution agency, provided “criminal justice advisers” whose role included “advising the police”.

A Foreign Office project is currently working “with the [Colombian] police to pilot approaches to conflict resolution”.

These programmes have all been run through the UK’s cross-government £1.3-billion Conflict, Stability and Security Fund, which has the stated purpose of delivering “activity to tackle instability and to prevent conflicts that threaten UK interests”.

However, a parliamentary committee has compared it to a “slush fund” for financing projects that do not “meet the needs of UK national security”.

The NCA was created in 2013 with the stated purpose of leading “the UK’s fight to cut serious and organised crime” and “protecting the public by targeting and pursuing those criminals who pose the greatest risk to the UK”.

It has been working for years in Colombia, although its activities are shrouded in secrecy. The only information in the public domain on its Colombian operations comes from the BBC in 2015 when its reporter was embedded with the organisation, and provided uncritical coverage.

The BBC reporter described a raid in the early hours of the morning by a group of Colombian special forces at a cocaine-producing lab close to the border with Venezuela.

“The intelligence needed to find the lab and carry out the raid was gathered with help from officers of the UK’s National Crime Agency (NCA) working in Colombia,” the reporter noted.

Aside from this kind of carefully calibrated media exposure, it is impossible to obtain information about NCA operations in Colombia — or anywhere else.

Last year, Declassified filed a request to the NCA under the Freedom of Information Act asking for the number of personnel it had based in Colombia. “Any information from, or relating to NCA, has an absolute exemption from disclosure,” the agency told us.

However, some clues are available as to the extent of the NCA’s presence in Colombia. A job advert for an administrator role for the agency based in the capital, Bogotá, notes the NCA team’s “wide spectrum of activities” in the country.

The NCA’s regional manager in Bogotá since 2020 has been Lindsey Kemp, who previously worked in the agency’s cyber crime unit.

But Dodwell said that while the current violence has gained international attention, there were similar abuses committed during protests in 2019 and 2020 with “almost total impunity for the police involved”.

He added: “Given this level of disregard for human rights, it is completely unacceptable that the British government is refusing to reveal information about its operations with the Colombian police. There needs to be unequivocal condemnation and an immediate suspension of any training or collaboration with units involved in abuses.”

“The current approach from the British government is seemingly giving a green light for the abuses to continue,” Dodwell said. DM