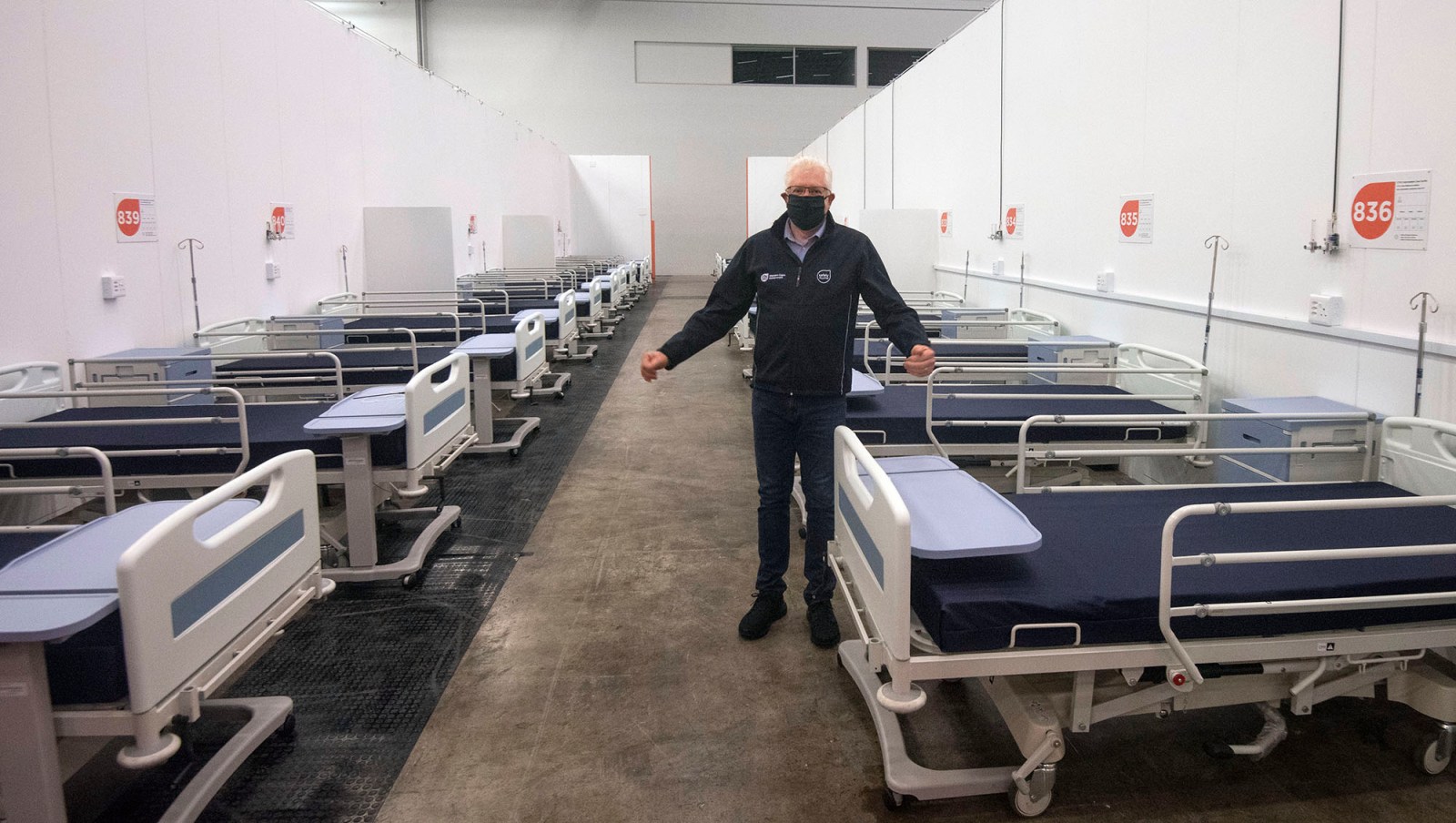 Western Cape Premier Alan Winde at the Cape Town International Conference Centre in May 2020, when it was converted into a Covid-19 hospital. The centre will be turned into a mass vaccination site during the third wave. (Photo by Gallo Images/Brenton Geach)

Provincial officials made two announcements on Wednesday: the province is entering its third wave of Covid-19 infections and the Cape Town International Convention Centre will open as a mass vaccine site.

With a 34% week-on-week Covid-19 case increase, the Western Cape is officially entering its third wave.

The province has 5,802 active Covid-19 cases – about 1,400 more than reported in the past week alone, according to a department presentation. There were 1,028 patients with Covid-19 complications in hospitals across the province (457 in public hospitals and 571 in private facilities).

Cloete said the third wave is expected to last between eight and 10 weeks, with the peak of infections and its decline based on the province’s first and second waves. He urged strict adherence to non-pharmaceutical interventions such as wearing masks, limiting unnecessary travel and avoiding large gatherings.

Gauteng, North West, the Free State and the Northern Cape are already in their third waves.

‘Centre of hope in our city’

There have been 249,009 vaccines administered in the Western Cape, Cloete confirmed – 93,153 under the Sisonke protocol and 155,856 first-dose Pfizer vaccines.

Currently, in Phase 2 of the roll-out only those older than 60 would be vaccinated. Cloete told Daily Maverick that in addition to the vaccination teams sent to frail and old age homes there are dedicated teams who administer jabs to people who are unable to leave home, such as those who are bedridden or frail.

Final-year nursing students were also being trained as vaccinators. Winde announced this week that 267 University of the Western Cape students would be trained to deliver vaccinations, with the first group of 134 starting by 17 June, reported News24.

On Thursday morning, the province, along with the City of Cape Town, announced that the Cape Town International Convention Centre would be turned into a mass vaccination site. The City would drive preparations of the site and the province would be responsible for its management.

Once it becomes available within the next few weeks the site would be able to vaccinate up to 5,000 people a day, said Winde.

“I’m excited to once again be working at full speed to open this world-class conferencing venue to residents across the City of Cape Town, enabling a radical increase in lifesaving vaccinations, he said, adding: “It is our intention for it to be a centre of hope in our city and province within a few weeks.”

The centre would “have up to 50 vaccination stations, with each station capable of administering 100 vaccinations per day. This will have a major impact on the pace of our vaccination programme, especially as we move to vaccinate residents under the age of 60.” DM