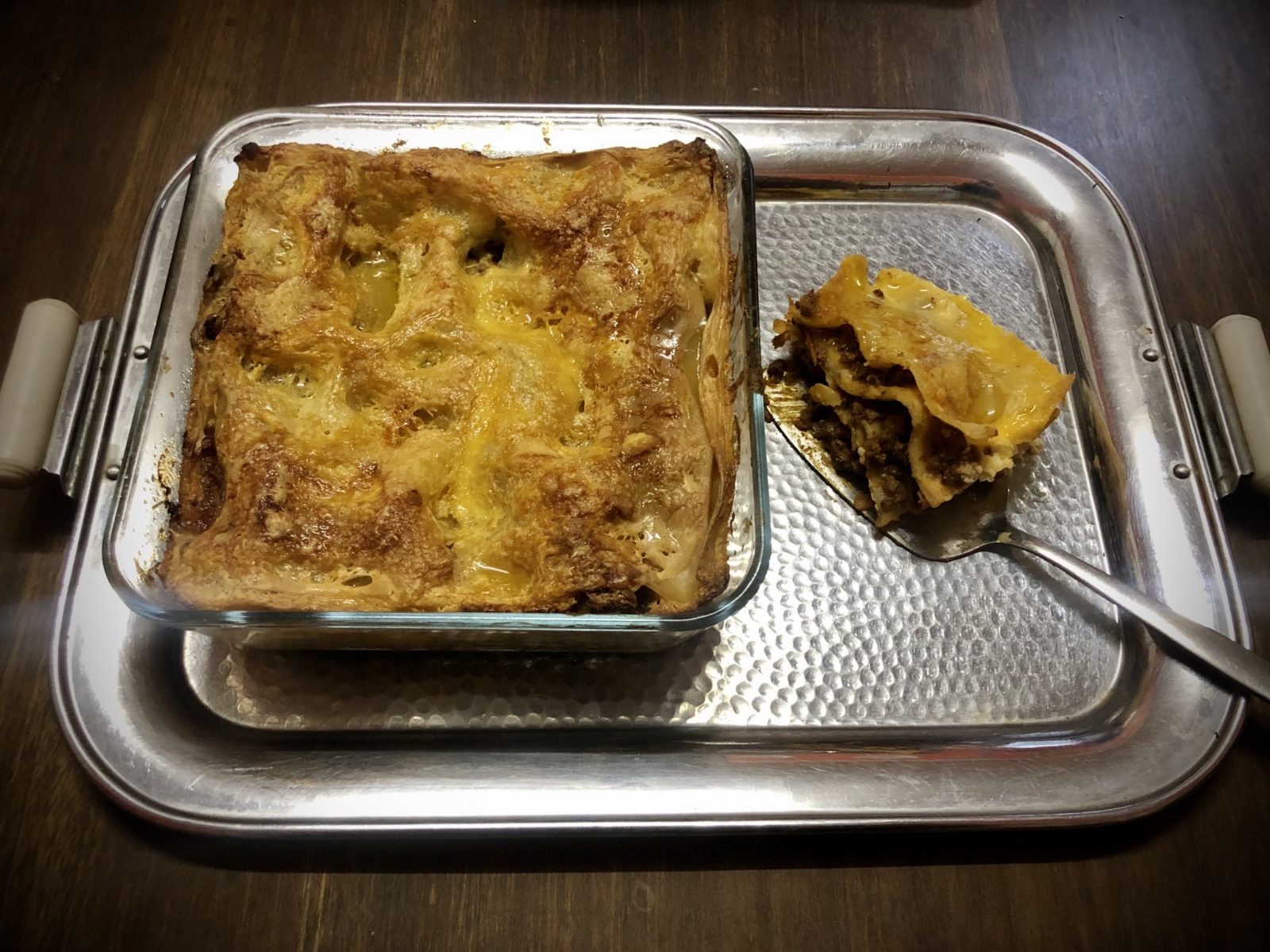 Lasagne al Forno, made of beef mince ragù built on a soffritto base. (Photo: Tony Jackman)

Ah, lasagne! Can’t you just see the portly Italian chef in his apron sniffing the flavours emitting from his forno (oven), inviting you in to taste the Italian classic. But it’s a minefield. You could be set upon by frenzied Neapolitan chefs for confusing a ragù Napoletana with a ragù Bolognese, which is from Bologna at the other end of the country. And yes, Americans have indeed made lasagna (their misspelling) their own, but the dish is nevertheless the real Italian deal in one regional variation or another.

Calling the dish Lasagne alla Bolognese means it’s made with a beef ragù of the kind made in Bologna, although knowing that lasagne, the pasta, originates in Naples does make you wonder whether it would make more sense to make it with ragù Napoletana, the slow-cooked meat sauce of Naples.

But nothing is straightforward in Italian cuisine. Bologna is in Emilia-Romagna in the north and is the region of origin of ragù alla Bolognese, known to most of the world as (spaghetti) Bolognese (not Bolognaise), although traditionally it is made with tagliatelle, not spaghetti.

A traditional Bolognese sauce is made chiefly of beef, tomatoes, beef stock and red wine, on a soffritto base (the Italian version of a French mirepoix of chopped carrots, celery and white onion). A soffritto used to be called a battuto in Italy. Lasagne originates in Naples in Campania, where the traditional ragù Napoletano is not made on a soffritto base as in the north, and contains various meats and a mighty amount of tomato. Either way, it is a slow-cooked beef ragù, and either would suffice for this lasagne dish, even if Neapolitan or (Bolognese) chefs might lynch you.

To confound matters further, Lasagne (or ragù) Napoletana (also known as Lasagne Carnivale, celebrated on Fat Tuesday, AKA Martedi Grasso) contains not only the requisite slow-cooked meat sauce, but little meatballs, slices of sausage and a good deal of cheese (ricotta, Parmesan, mozzarella). So this dish is not Lasagne Napoletana.

The origins of many classic dishes are debated and argued over, if wars are not fought over them. If modern-day Americans claim “lasagna” as their own – insisting on misspelling it and even asserting that its plural is “lasagnas” – ancient Greeks may claim that it is they in fact who originated it. But that doesn’t mean it isn’t as Italian to our generations as carbonara, osso buco and changing governments every few weeks.

In earlier times the lasagne sheets contained spinach (hence, you can still buy it today), but tomato was not an ingredient of the ancient recipes.

Officially, according to the Accademia Italiana di Cucina, lasagne al Forno or alla Bolognese describes a dish of pasta sheets layered with ragù and béchamel. And that’s what it is.

First make a beef stock, or use a good quality bought liquid beef stock (don’t ruin your meat base with an overly salty beef stock cube). Roast cheap beef bones in a very hot oven for 40 minutes, then pour off the fat. After pouring the fat off, add hot water and scrape the pan to rescue the flavour from the sticky bits at the bottom. Put this water and the bones in a stock pot with 1 chopped onion, 2 chopped carrots, 2 or 3 chopped leeks and 1 chopped celery stick, and add 3 litres of water. Boil rapidly until reduced by half.

Make a béchamel sauce by bringing 1 litre of full cream milk just to the boil with 2 bay leaves in it (don’t actually boil it), then melt 4 Tbsp butter and (off the heat) quickly stir in 4 Tbsp plain flour to make a roux. In a pot on a moderate heat, stir the hot milk into the roux until the milk is all incorporated and you have a thick white sauce. Season with a little salt and pepper to taste, and grate a little nutmeg in. Remove the bay leaves. Now grate 1 cup/ 250 ml Parmesan and stir it into the hot white sauce. Keep this aside.

Ingredients for the lasagne

Make a soffritto, the Italian alternative to the French mirepoix: Peel and dice 2 carrots, 1 white onion, a stick of celery and 2 cloves of chopped garlic, and sweat them on a low heat until soft. This is the base for your ragù, the meat component of the lasagne, although it is the first three (onion, carrot and celery) that are the “holy trinity” of a soffritto.

To the soffritto, add the beef mince, and work it with a wooden spoon to ensure that you don’t have lumps of mince. Cook gently until the meat is well browned, stirring occasionally.

Add the red wine and cook until reduced by half, then stir in the tomato paste. Now add the canned tomatoes, 2 bay leaves, and two thirds of the beef stock, and season to taste with salt and pepper. Cook very gently with the lid off for an hour or more, then add the remaining 500 ml of beef stock. Cook gently, still uncovered, for another hour or so.

You’re looking for a dense beef ragù; you don’t want it to be a watery mess but you do need enough liquid in it to cook into the pasta while in the oven. The longer and slower the cooking, the more intensely flavoured your ragù will be. The more the liquid cooks away and the flavours develop, the more you will need to stir it gently to prevent it catching.

Finally, spoon the béchamel over the top and grate Parmesan over. Bake in a preheated 190℃ oven for about 40 minutes or more until the sauce is bubbling happily and the dish has turned to golden delight on top. And you thought lasagne was bad old news from the Seventies? I’m thinking you might be rethinking that. DM/TGIFood