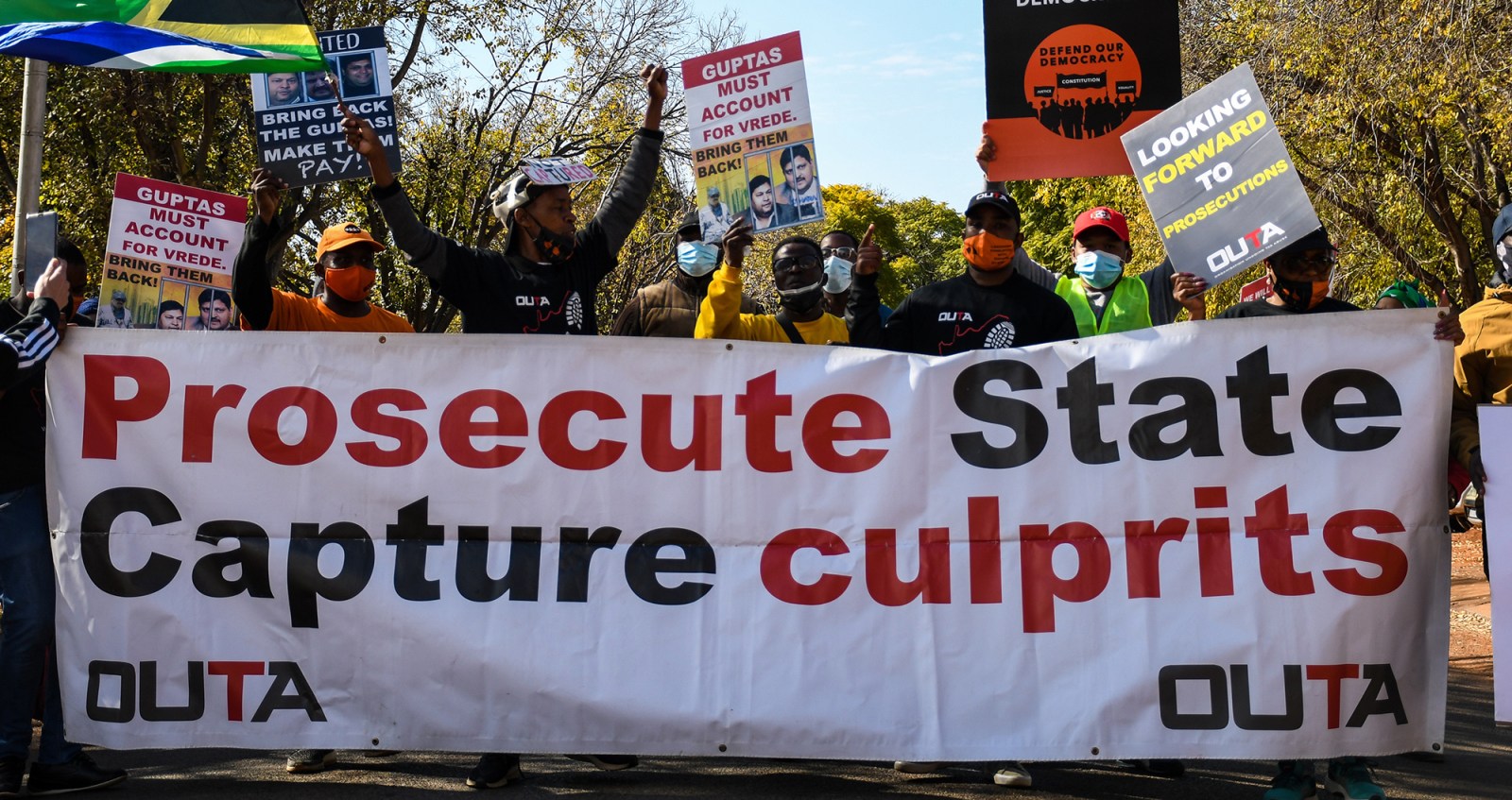 About 50 people in solidarity with the Ahmed Kathrada Foundation picketed outside the UAE Embassy in Pretoria, demanding the Guptas be immediately extradited back to South Africa. (Photo: Julia Evans)

In a defining moment for South African democracy, the Guptas’ extradition treaty was signed this week. But in Pretoria, protesting political organisations said they would not rest until they were back in the country, and in jail.

“I never thought that 27 years after our freedom, I would be protesting in the street again. But this is where we are,” says Frank Chikane. The former anti-apartheid political activist and ANC member addressed the crowd outside the United Arab Emirates (UAE) Embassy in Pretoria, where multiple political organisations, in solidarity with the Ahmed Kathrada Foundation, were demanding the extradition process of the Guptas to come to term, their assets in UAE to be seized and for the Guptas to face trial.

Neeshan Balton, executive director of the Ahmed Kathrada Foundation (AFK) said, “We hope we will be sending a signal to both our government and the UAE government that this treaty that they’ve signed, needs to now move towards practical implementation. Let it not take another two years before the treaty is enforced.”

Balton’s comments follow the treaty to extradite the infamous Gupta family finally being ratified by the UAE on Wednesday. The Guptas came to South Africa in the nineties to explore business opportunities. They founded Sahara Computers and bought stakes in mining, engineering and media businesses. They have frequently been linked to political controversy, with their ties to ex-president Jacob Zuma, as well as being accused of money laundering, corruption and influencing the political elite for personal financial gain.

In 2018, the Guptas’ business dealings in South Africa came under scrutiny in the State Capture Inquiry. Gupta brothers Atul and Rajesh, and their wives Chetali and Arti — along with 17 others — were accused of money laundering R24.9-million, a charge presented at the Bloemfontein Magistrates’ Court.

Former associate and Transnet board member Iqbal Sharma, who is connected to the same fraud and money laundering case, was denied bail earlier this week and is in custody at the Bloemfontein Magistrates’ Court.

The Guptas left South Africa in 2016 and have been living in the UAE to avoid facing up to an alleged R50-billion in State Capture crimes.

With the treaty now ratified by the UAE — after three years of alleged translation delays — and South African political organisations and citizens not backing down, they might finally face their day in court.

The foundation, as part of its campaign to profile the crimes of the Guptas in State Capture, demonstrated outside the UAE Embassy and slid a memo under its gates. Demonstrators were joined by the Defend Our Democracy campaign, the Organisation Undoing Tax Abuse (OUTA), Right2Know Campaign, the Good party, Cope and the South African Communist Party.

Balton told Daily Maverick that demonstrators were happy that the treaty had finally been signed and commended the NPA for pursuing the case, but said they would only rest once the Guptas were behind bars, as their actions set a precedent for corruption in South Africa. “They’re not the only ones… But they’re the ones who come to symbolise State Capture in this country.”

“From the time they landed their plane at Waterkloof in 2013. That is when South Africa became aware that there is something going wrong here,” said Balton, addressing the crowd. “But I don’t think we understood fully the kind of deals they were involved in… we’re never going to rebuild trust in this country until those who have been found guilty of State Capture are brought to book and are seen in orange overalls behind bars as a matter of urgency.”

Thandi Tobias-Pokolo, chairperson of Brand SA and former Deputy Minister of Trade and Industry, said she had cancelled meetings and drove from Heilbron, Free State, to participate. She did so because supporting the State Capture Commission and holding corrupt individuals to account “is a defining moment for SA democracy”.

Addressing the crowd, Tobias-Pokolo said, “We are here today to support efforts of the government and everybody else to ensure that South Africa is brought back to what it is — a democratic society, a transparent government. The State Capture Commission is a symbol of bringing back that integrity.”

Cope spokesperson and MP Dennis Bloem told Daily Maverick he wanted action. “I want these people to be arrested… because they nearly destroyed the future of my children because of the looting they’re doing.”

Bloom told the crowd, “I see Reverend Frank Chikane here, a person who has struggled for freedom… comrade Neeshan (Balton), who was sitting on cold Robben Island is here… We are going to fight until all the criminals are in jail.”

Chikane spoke about corruption bringing the country down: “I was addressing a meeting in Nelson Mandela Bay, and then saw the rubbish there — it is a failure of the system to deliver basic services. It’s not what we struggled for, suffered for, got tortured for.

“We’re not here to fight with the country. We want you to be partners in dealing with this corruption. And would like you to make sure these people come here and come soon, to account for undermining our integrity and our dignity.”

“We are ashamed that after almost three decades in this country, we still have children who fall into pit holes,” said Ali Gule of OUTA. “We still have kids who don’t have books at their school… and we’re not going to rest until the Guptas come back to the country and tell us what happened. If need be, get arrested and prosecuted for stealing because thieves belong in jail.”

To strong affirmation from the crowd, Chikane said: “I want to say the Guptas made a big mistake. They touched the wrong country.” DM