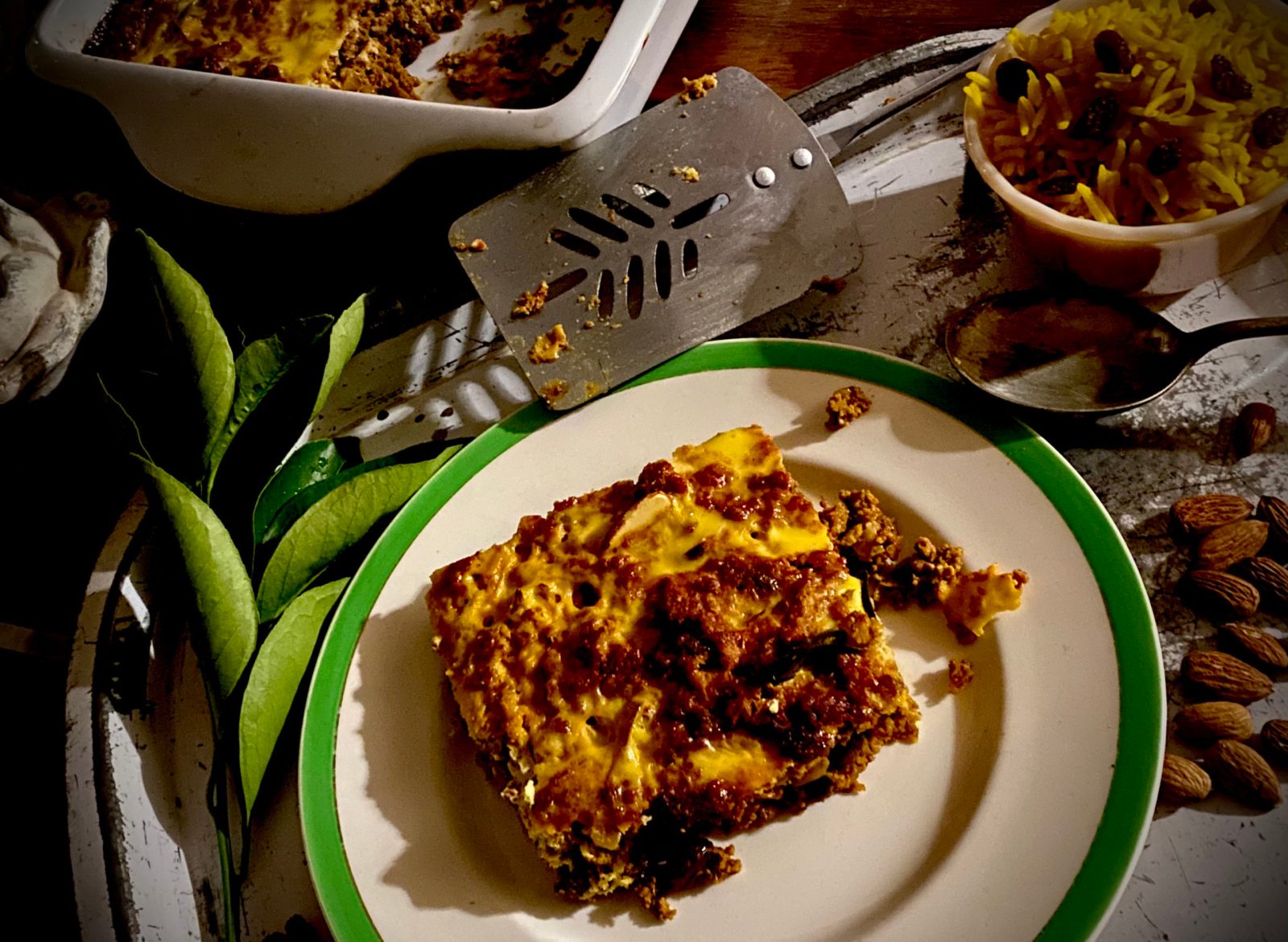 Tony Jackman’s bobotie with a side of turmeric rice. (Photo: Tony Jackman)

Bobotie is arguably the king of South African dishes, beloved by Mzansi citizens across the spectrum of all our complex and exhilarating humanity. This week I set about making it definitively.

There are schools of thought, and there are the old ways. In the misty decades long before any of us living now were born, fellow South Africans now long mouldering in their graves cooked bobotie, ate bobotie, and adored bobotie. In the old Cape kitchens, the leaves of lemon and orange trees were used as spices, or aromatics if you like. Spices had become quotidian and were put into most dishes of a cuisine that was taking shape, but some of its ingredients and traditions have been left by the wayside in the passage of time and all the distractions of life that our generations have lived through.

But we have the opportunity, here in this howmanieth month of lockdown and pandemic, to stand still, look back at where our national cuisines have come from, and decide to pick up some of the old ingredients and discarded ways.

Bobotie is often made in our time with bay leaves, but in the old kitchens, lemon leaves were often used, and there would have been no reason not to substitute them with orange leaves, if that is the citrus tree you happened to have to hand. So, in my recipe for bobotie, I used lemon leaves, and they added so much more to the dish than mere bay leaves would have. I added lemon juice too, because it would have been used in the old recipes, as is confirmed by the food historian Renata Coetzee in her timeless book The South African Culinary Tradition, and by Leipoldt, Lesley Faull, Vida Heard, and others.

The old recipes also used slivered almonds, and many modern recipes for bobotie leave them out. In those days, almonds were easily obtained, and yes, they are now too, but at a steep price, as with any nuts in these inflated times. But I used slivered almonds too, and they certainly played their role in the dish.

The old recipes used raisins, but sultanas would not serve the dish badly, so you could use either. I believe that bobotie would not be bobotie without containing both apricot jam and chutney, in modest proportions, because you don’t want them to kill the flavours of the leaves and nuts. Older recipes also include a grated apple, but I don’t see the need for it; there’s enough sweetness already from the chutney and apricot jam. Some modern recipes call for Worcestershire sauce. That’s an emphatic no from me.

As for the meat, mutton or lamb would be more traditional, but they are rather fatty. These days, especially in the Karoo, cooks often use a mixture of meats, very often mutton/ lamb and venison. Or you could use a mixture of mutton and beef, which is what I did for this recipe. As long as the flavour profile of the spices, raisins/ sultanas, nuts, apricot jam and chutney is well balanced, it doesn’t matter which meat or combination of meats you use, as long as they are well minced and fairly lean.

I used onion, obviously, but I added garlic too, although Coetzee’s recipe does not call for it. I cannot see what harm a bit of garlic can bring to a bobotie (unlike Worcestershire sauce, which would throw the entire flavour profile out of kilter).

There must, of course, be masala/ curry powder; and turmeric strikes me as being essential to a bobotie, so I added it although, again, Coetzee does not mention turmeric, though Leipoldt, Heard and Faull do. I think that is an oversight on Coetzee’s part.

Finally, the question all bobotie cooks must consider: whether to cook the mince first with most of the flavourings, or to pack it into the dish raw and only bake it in the oven. In the old days the meat was often left over from a roast, so obviously had been cooked first. But we don’t have to follow every tradition if we can find better ways. I found a middle path, and here it is, in the method below for what, with a little presumption, I’d argue is definitive, as it takes into account many aspects of what makes a great bobotie, I took great care to balance it as perfectly as I could, and I was delighted with the result. It was utterly delicious, and I hope you find it so too.

Sauté the onion and garlic. Add mince and work it with a wooden spoon to ensure the meat does not form clumps. Add everything except the eggs, milk, almonds and lemon leaves.

Note that cooking the onions and garlic first and then working the minced meat into it is the only precooking that I did. The rest happens in the oven.

Serve with turmeric rice (which is cooked the way you normally cook it but with a teaspoon of ground turmeric in the water). DM/TGIFood