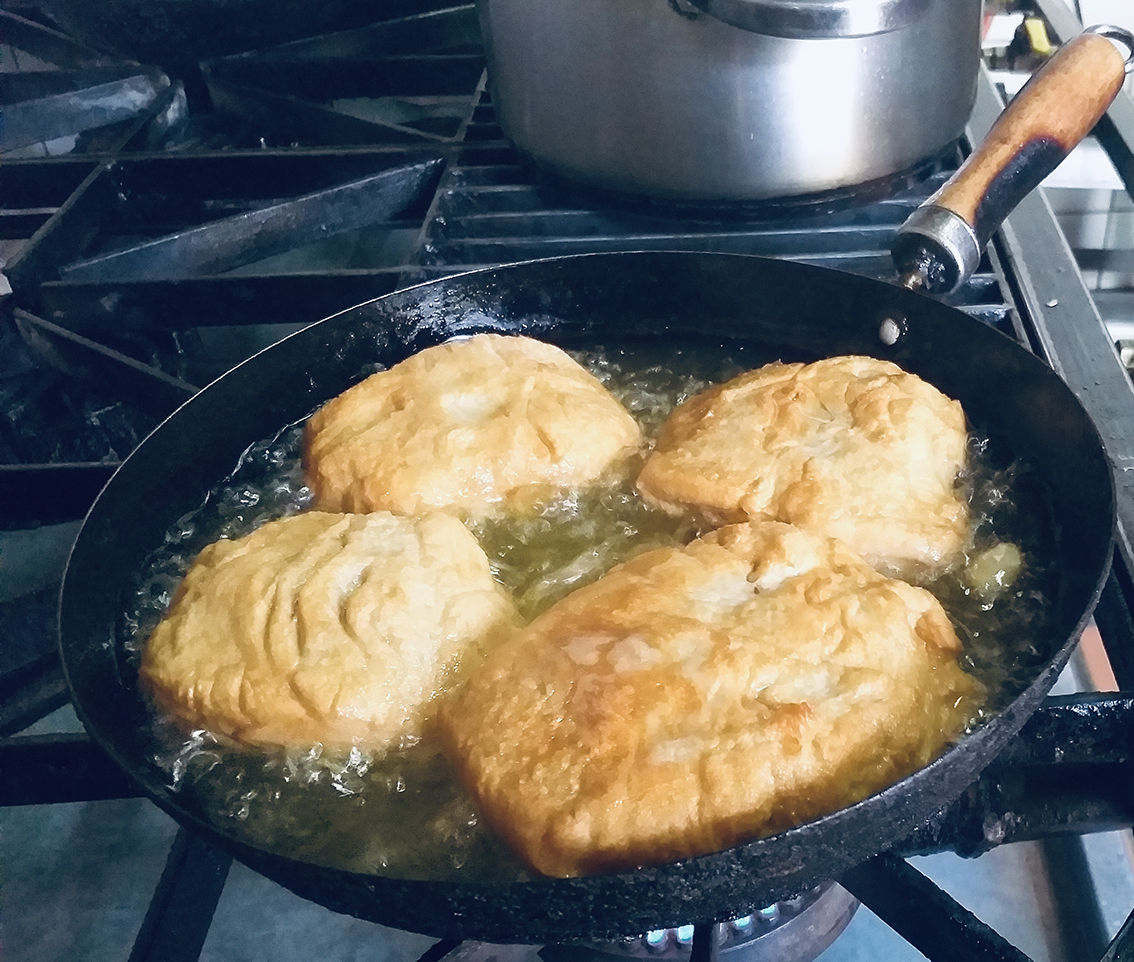 Vetkoek is fried in a deep pan filled with hot oil. All sides need to be golden. (Photo: Louzel Lombard Steyn)

The lowdown on local grub, from biltong to tripe and trotters.

Biltong: Americans will tell you that they have their own version of biltong, but beef jerky is a pale imitation of our flavourful, spicy, incredibly expensive snack. Woolies biltong is one of the most costly substances on Earth, narrowly beating saffron and beluga caviar.

Bobotie: One of those love-or-hate dishes, your appetite for bobotie is largely predicated on your fondness for the combination of hot egg and raisins.

Boeber: Cape Malay drink made of rose water, milk and vermicelli, used to break the fast during Ramadan – aka the most delicious thing your parched mouth ever tasted, though you might feel differently if you tried it under normal circumstances.

Boerewors roll: A previously staunch vegetarian friend recently fell off the wagon, lured by a boerie roll. She ate it with her eyes closed: an indication of the ecstasy this spiced sausage in a hot dog bun can induce.

Bunny chow (similar to Spatlho and Kota): This is what Tim Noakes sees in his nightmares. Take half a loaf of white bread and stuff it with meat and chips or curry and salad.

Chakalaka: It is illegal in South Africa to say the word “chakalaka” without doing a sassy face or a little hip shake, even though you are just referring to a kind of relish.

Chicken Licken Hotwings: Arguably, our national dish. Can also be procured from KFC. If you’ve never indulged, you are the definition of a “coastal elite”.

Come Dine With Me SA: Our version of the TV cooking show is better than the UK’s because the contestants on the local iteration are usually reeling drunk and include one woman who collects fairies.

Frikkadel: Basically a meatball that went to an Afrikaans school.

Gatsby: Related to the F Scott Fitzgerald novel only in terms of its excess, this Cape Town favourite requires a roll stuffed with masala steak, eggs, cheese and chips – and three days off work to sleep it off.

Koesisters: If you want to spark the national civil war South Africa has thus far avoided, bring up the great koesister/koeksister debate. They are two completely different sweet treats: the first is a kind of spicy donut; the second a syrupy pastry. It would be great if the second type could change its name and apologise.

Magwinya: At the end of the day, isn’t there more that unites us than divides us? Proof: in both Afrikaans and African culture, almost nothing is considered more delicious than deep-frying doughballs into little fat cakes (vetkoek to Afrikaners).

Malva pudding: A warm malva pudding administered in the heart of a foreign winter can move a homesick South African expat to tears.

Melktert: Suggest that this is basically a custard pie at your own peril.

Monkey gland sauce: What is in this disgustingly named condiment? Nobody knows.

Mopane worms (with peri peri sauce): The kind of thing that Americans would only eat on survival shows where they stand to win a lot of money. We South Africans are made of stronger stuff.

Mrs Ball’s Chutney: Technically more of a jam than a chutney, but that hasn’t stopped Mrs Ball from becoming hands-down the most popular white woman in South Africa.

Nando’s: The Portuguese chicken franchise is SA’s proudest export other than Charlize Theron, Trevor Noah and the Ndlovu Youth Choir.

Pap: We didn’t invent it, but we perfected it.

Polony: The sort-of-meat choice of many South Africans, despite the world’s deadliest listeriosis outbreak in 2018, which killed almost 200.

Potjiekos: In a way, potjiekos is a metaphor for South African society – in that you shove a lot of disparate elements into a confined space and then let resentments simmer to a boil.

Pumpkin and spinach: If you have to guess blindly what two vegetables will be served at any South African dinner, it will be these two.

Samp and beans: This South African staple, made of maize kernels and sugar beans, can be enjoyed modestly or extravagantly.

Smileys: A grimacing, decapitated sheep’s head that you are certain to enjoy over and over again –  as it revisits your nightmares after eating.

Tjop en dop: Heaven, for most of us. If you do not like to braai, please do us all a favour and emigrate.

Tripe and trotters: We are a country with a tremendous appetite for stomach lining. Pair with some curried pig’s feet for the ultimate culinary experience. Many love it; others think it’s offal. DM168