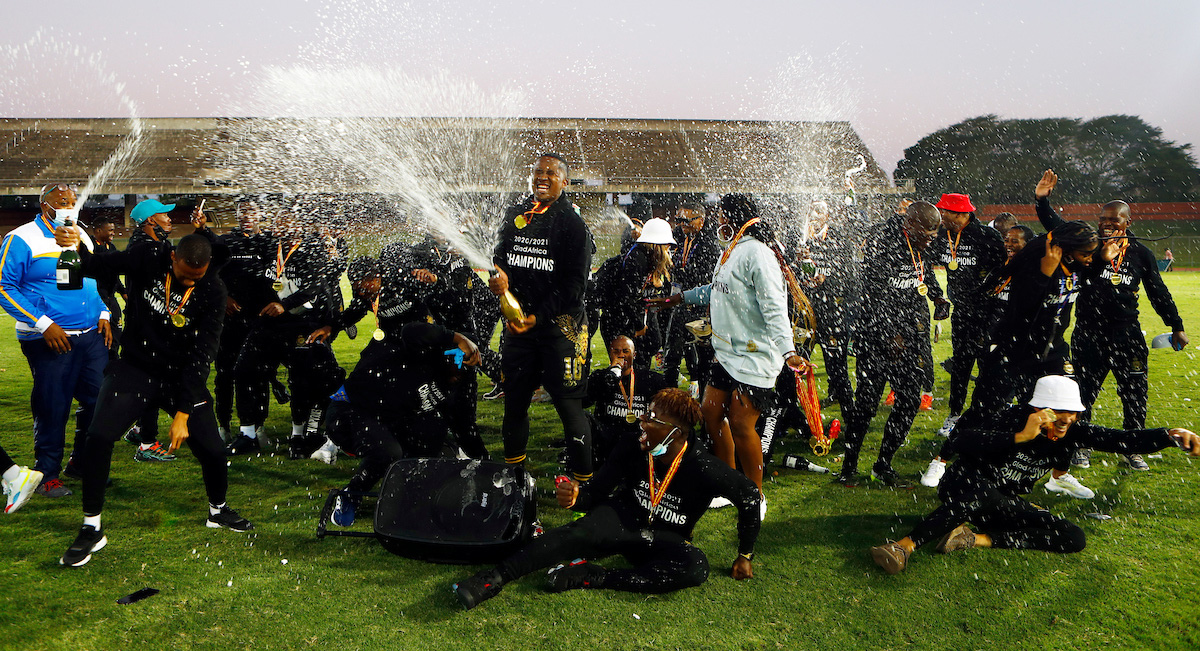 Royal AM FC celebrate their win after the GladAfrica Championship 2020/21 game against Cape Town All Stars at Chatsworth Stadium on 23 May 2021. © Steve Haag/BackpagePix

The South African football season is near its conclusion, and once again the issue of relegation/promotion has come to the fore. Will they ever be scrapped?

While the Premier Soccer League (PSL) scrambles to resolve the issue of crowning a GladAfrica Championship champion, the matter of the relegation and promotion playoffs is in the spotlight once again.

Consistently, as the season draws to a close, and both the DStv Premiership and Championship logs begin to take shape for that specific season, talk turns to the merits of having promotion/relegation playoffs.

The playoffs then see the team that finishes 15th in the top-flight fight it out with the teams that finish second and third in the Championship in a round-robin group format.

The team that accumulates the most points during that phase either retains its Premiership status, or a new team is promoted.

At a recent appearance by South Africa football custodians before the Department of Sport’s oversight committee, PSL chairperson Irvin Khoza explained the logic behind having the playoffs as opposed to the ideal situation of two teams suffering relegation and two others gaining automatic promotion.

“The ideal situation is supposed to be two down and two up. But when we configured the PSL in 1996, there was a lot of give and take, a lot of sacrifices to make sure that the league is viable and the funding model is viable. Because not all the clubs at that point in time were marketable, to get sponsors. We had to find a way of how best to create an exciting, competitive league,” said Khoza

“Fast forward to [today], the league spends R114-million in subsidising the first division… If you want that ideal situation, it means everybody must fend for themselves. You can’t go and subsidise and at the same time be disadvantaged. So that is a bit of a tricky situation”.

Both the teams that make up the Premiership, as well as the Championship, receive grants from the PSL.

These grants are pulled from the funds that the PSL generates through sponsorship and the selling of broadcast rights. Premiership sides receive a fixed monthly amount of R2.5-million each, while those in the second tier receive R500,000 each.

“That funding model has been understood by members, that relegation/promotion. If you want an ideal situation, it’s important that we do away with the grants, everyone must fend for themselves. You must come there because you are ready and have enough money to look after your promotion and relegation. Not that somebody must fund you,” continued Khoza.

“It’s a reasonable situation. It happens in England, but in a different way. Where there are three automatic relegations, but there are other playoffs. Nobody in the premier division remains because they are self-financing in the first division of the Premier League in England.”

Fair is fair or foul?

The gripe around the playoffs is that they are unfair. A great example of this comes from last season.

Ajax Cape Town, having led the Championship for the bulk of the 2019/20 season, were pipped by Swallows to the solitary automatic promotion spot on goal difference, on the last day of the season.

The Cape Town side ended the season in second and went to the playoffs against third-placed Tshakhuma Tsha Madzivhandila (TTM), and Black Leopards who had finished second-last in the Premiership.

In the playoffs, with their morale undoubtedly down from losing the league in such a manner, they were overpowered and again finished second. Leopards, who are on the cusp of relegation again this season, retained their spot in the top-flight.

Losing out on promotion cost Ajax in more ways than one. It saw the team’s 20-year partnership with Dutch side Ajax Amsterdam severed, as the European side sold its shares within the club and the Championship team was renamed Cape Town Spurs.

This season they did not even feature in the contention for the league, and barely survived being relegated to the third tier after finishing in 14th place in the 16-team league.

Over the past five seasons only two teams from the Championship have won the playoffs. In the 2015/16 season Highlands Park won the playoffs, with Premiership side University of Pretoria losing their top-flight status.

Two seasons later Leopards also bucked the trend when they earned a place in the Premiership via the playoffs, with Platinum Stars falling to the second tier.

The 2016/17 season saw Baroka retain their status in the playoffs, while Maritzburg United did the same in 2018/19.

According to Khoza, there has been consideration of implementing the two up, two down process, but the chairperson said at this point they are happy with it because it works.

“The formula, for now it works. We are working towards that ideal situation of two down, two up – at the appropriate time. But if we want it immediately, it means we must go back to everybody fending for themselves, you cannot be funded. If that is required by clubs, they must decide. There’s no problem with us. But for now, it is about the balancing of things to make sure we have a viable national first division,” he said. DM