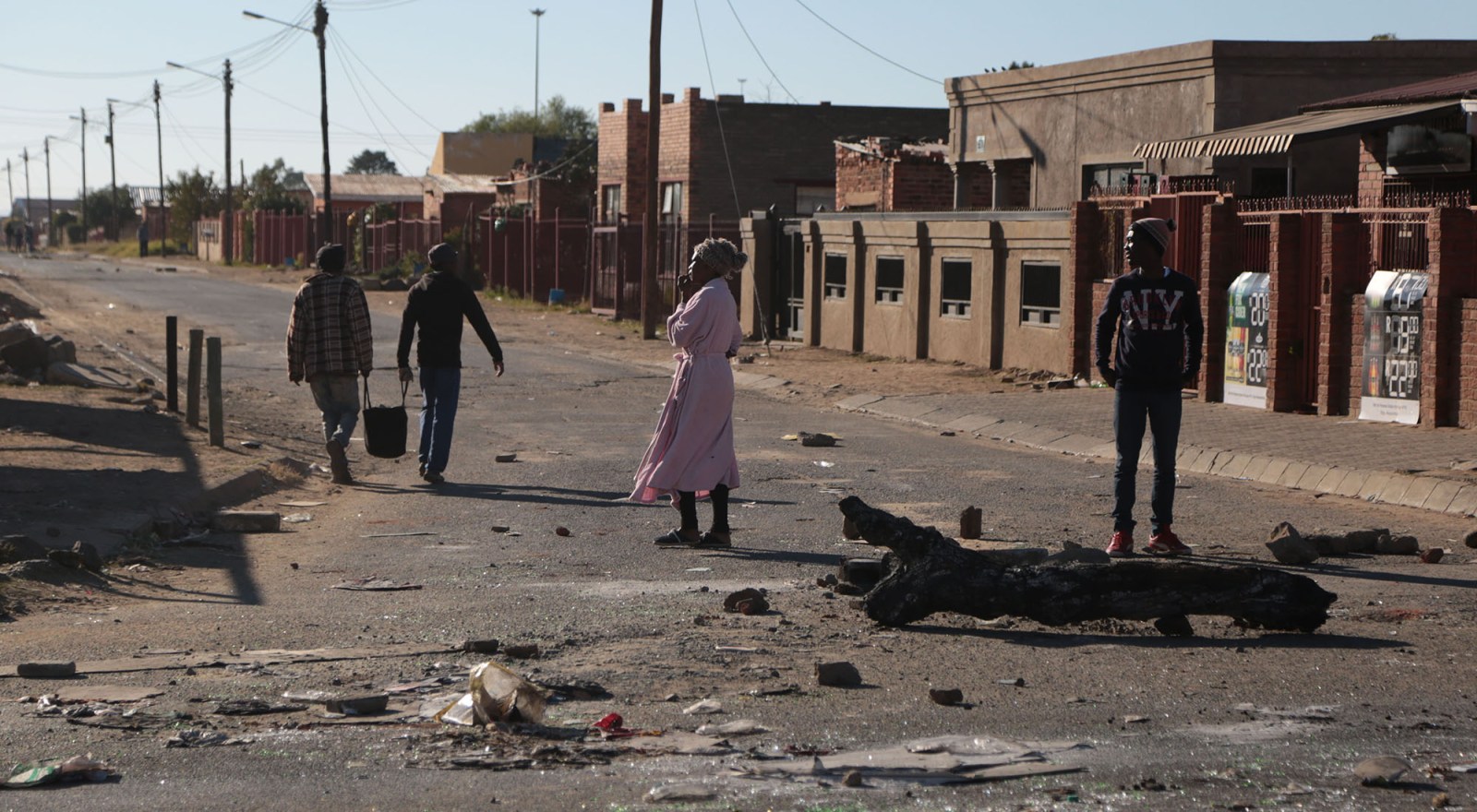 Debris is strewn on the streets after three days of shutdown in Mangaung, which severely affected services and closed schools. Photo:Felix Dlangamandla/Daily Maverick

The Mangaung shutdown protests, organised by a group identified as the Mangaung Concerned Community, began on Sunday, 16 May when the group rallied various communities in the metro to join the city-wide demonstration.

Concerned by a lack of service delivery, housing, business and job opportunities in the metropolitan area, the group wanted the Mangaung council to be disbanded and the city manager to step down. In 2019, the metro was placed under administration after service delivery collapsed.

Economic activity in the metro was halted for two days. Businesses, government buildings and schools were deserted on Monday and Tuesday after major roads were barricaded and closed to prevent residents from travelling to the city for work and other purposes.

By Tuesday morning about 15 areas had become part of the protest action, said Kabelo Selogile, a committee member of the Mangaung Community Concern.

For the many impoverished residents the protest was an opportunity to voice their frustrations with the ANC-led Free State government.

“When you are poor in South Africa, the only way to get politicians to hear our concerns as communities is if you protest,” said a resident of the Gatvol informal settlement during service delivery protests in Mangaung. “Gatvol” means totally fed up/had enough in English.

According to the Institute of Security Studies’ public violence and protest monitor, frustration with service delivery failures resulted in 585 incidents of public protest between January 2013 and April 2021, 378 (65%) of which turned violent.

By Monday, 17 May, the Mangaung protests turned violent and the death of a teenager, Jevano Siegel, further outraged residents.

A municipal official’s car was torched after he was allegedly pulled over and thrown out of it for trying to go to work during the shutdown. On Monday evening, residents alleged that criminals had hijacked the service delivery stayaway and started looting foreign-owned shops.

Over the years, the majority of service delivery protests in the country have been marked by exceptionally high levels of violence and vandalism as people vent their anger and frustrations over local government failures to fulfil their duty – delivering basic services.

The xenophobic attacks on foreigners and their businesses are fuelled by the misguided perception that foreigners are reducing economic opportunities for South Africans.

However, the legitimacy of the right to protest is not a justification for public violence.

When Daily Maverick revisited a foreign-owned bottle store on Wednesday, which had been looted the previous day, it had been set alight.

The provincial government was accused of corruption and having leaders who serve their interests and not those of the public.

The province and some of its current and past leaders have been embroiled in corruption scandals that have scarred the province and its economic outlook.

The Free State is teeming with unfinished development projects and vandalised and abandoned government buildings. Raw sewage flows in the streets of many townships, even in the Bloemfontein CBD.

Many of these projects began during the administration of the then premier, Ace Magashule, who now faces allegations of corruption and money laundering involving a multimillion-rand asbestos contract.

A Daily Maverick investigation revealed how Magashule’s eight-year tenure as premier left a legacy littered with failed, incomplete or stagnant projects and developments.

With the coming 2021 local government elections, many residents are wary that their vulnerabilities can be exploited when politicians campaign for votes.

“When they want our votes, they promise us the world,” said one resident, Pakiso Manamathela.

He said none of the promises made during the 2016 local election have been fulfilled. These included installing temporary sanitation facilities for the informal settlement and eventually relocating its residents to better housing in 2017.

StatsSA’s non-financial census of municipalities for the year ending 30 June 2019 showed that the number of communities using the bucket system provided by municipalities increased in the Free State.

Almost half of all consumer units that use a municipal-supplied bucket toilet in South Africa are in the Free State, according to StatsSA.

Eleven municipalities in the province provided bucket toilets to a total of 20,688 consumer units.

The number of communities in the province receiving free basic water services drastically decreased by 9,871 consumer units in 2019.

The Free State has the second-largest unemployment rate in the country at 42.6%.

One of the demands of the Mangaung Concerned Community is that the fully funded 3,600 vacancies be filled immediately after they were allegedly frozen when rumours started circulating that people aligned to a particular ANC faction in the metro were given preference for these jobs.