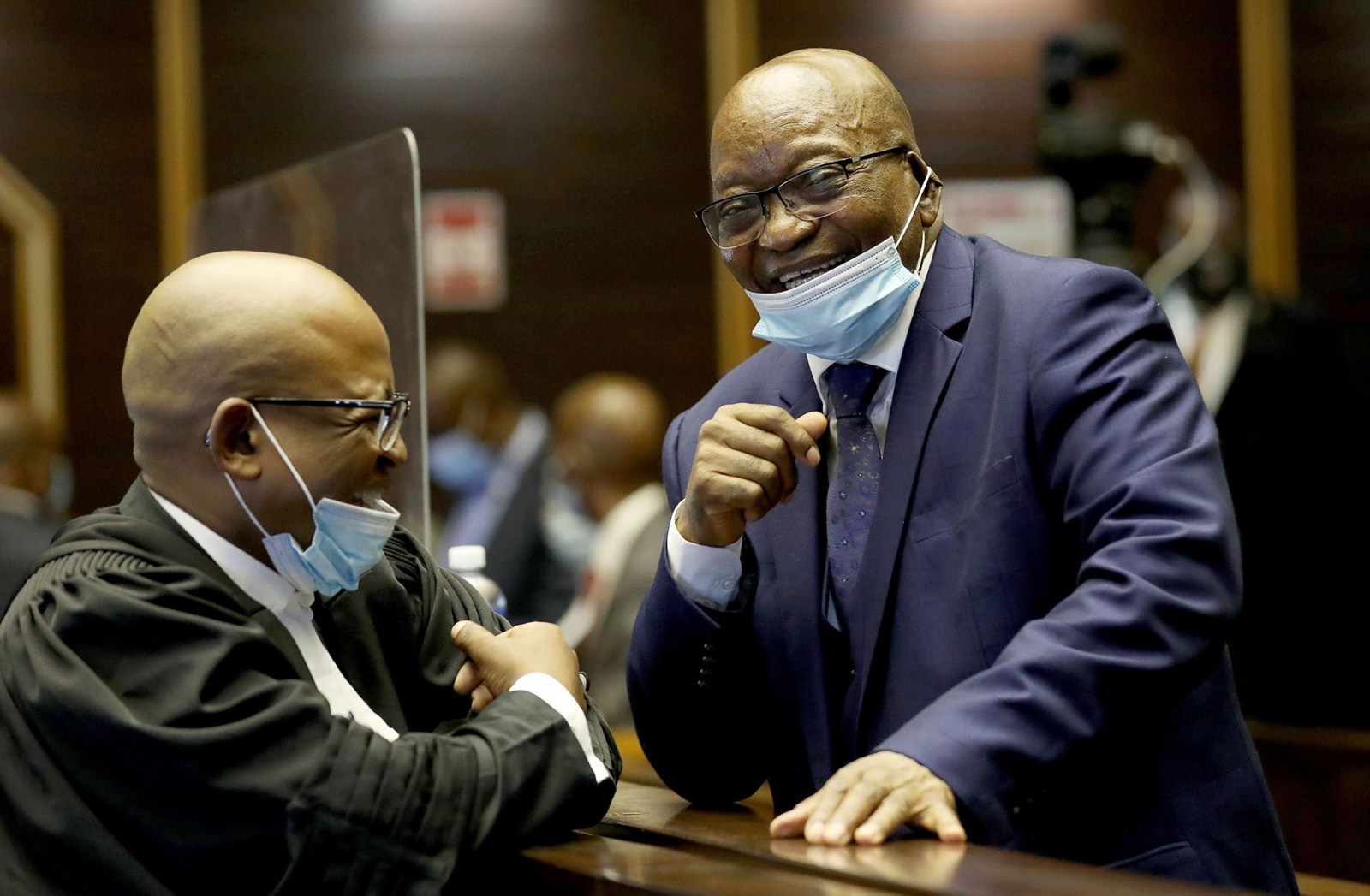 Former South African President Jacob Zuma speaks with his legal representative at the High Court in Pietermaritzburg on May 17, 2021, for the first day of his corruption, fraud, money laundering, racketeering and tax evasion trial. Photo: SANDILE NDLOVU

Court proceedings at the kick-off of Jacob Zuma’s corruption trial were swift and clinical on Monday, with a postponement to May 26. Ace Magashule, Carl Niehaus, Bongani Bongo, Tony Yengeni and former North West premier Supra Mahumapelo were among his  VIP supporters who crunched into the courtroom ‘A’ gallery.

The Pietermaritzburg high court heard on Monday that former president Jacob Zuma would be making an application for veteran prosecutor Billy Downer to be removed from his graft trial, almost 20 years in the making.

The start of proceedings was delayed for over an hour as legal teams met in the chambers of Judge Piet Koen to deliberate on an appropriate date for postponement, with 26 May being said to be to the satisfaction of all involved.

When proceedings finally started, Downer confirmed with the court that Thabani Masuku SC, Zuma’s advocate, had notified him last week of the application.

“Mr Masuku informed me last week that they intended bringing an application for me as lead prosecutor to be recused. We were promised those papers today. I haven’t seen them yet,” said Downer.

The court heard the application to have Downer removed contains affidavits and “other evidence”.

Technically, this is not an application for a “recusal” but rather a special plea that Downer has no title to prosecute.

Masuku officially informed the court on Monday that he, along with attorney Mondli Thusini and advocate Benny Buthelezi, would be representing Zuma.

The replacement of the former legal team would not cause any delay in proceedings, said Masuku. “Mr Zuma is ready to proceed with trial” and had always been ready, he said.

But the Section 106.1(h) application in terms of the Criminal Procedures Act demanding Downer’s withdrawal has effectively bought the defence at the very least 10 days. By next week they will have to file papers relating to the withdrawal. The state will have to respond, and Koen will have to make a decision after hearing both sides.

This is not unprecedented and is not the first time Zuma has raised the issue of Downer’s prosecutorial fitness for the case (he has previously accused the veteran prosecutor of being hell-bent on prosecuting him, even if there is evidence of his innocence), although those attempts have been abandoned. Once Koen has heard the arguments, he will have to make a decision on the merits of the application, and if his decision goes against Zuma, the former president will have to enter a plea of guilty or not guilty.

This will all eat into trial time, which was set down on the court calendar until June 20.

Court proceedings on Monday were swift, clinical, and a far cry from the spectacle taking place outside the courthouse just hours prior, with journalists arriving from about 6am, and a little later providing breathless speculation via live coverage from outside the dour building.

There were no surprises as Zuma’s VIP supporters strode into the court precinct, some cajoling the media, others sidestepping questions about their own fate within the organisation with the grace of alarmed elephants.

It was only ANC KZN secretary Mdumiseni Ntuli who even attempted to make sense of the spectacle, telling the media that the leaders of the provincial ANC were at court to protect the reputation of the ANC.

He said that at previous appearances, some had taken to the stage after proceedings to push their own agendas, which was damaging to the governing party. “We also believe in innocent until proven guilty,” he said.

Ntuli was later booed by a handful of Zuma supporters outside the courthouse due to the provincial ANC’s alleged lack of support for the former president, who remains popular in KZN.

Downer was part of the original prosecuting team that secured the conviction of Shaik on fraud and corruption charges in 2005.

Masuku told the court that Zuma intends to plead not guilty to the charges. DM