Accused Number One: Zuma’s day in court arrives … but don’t hold your breath 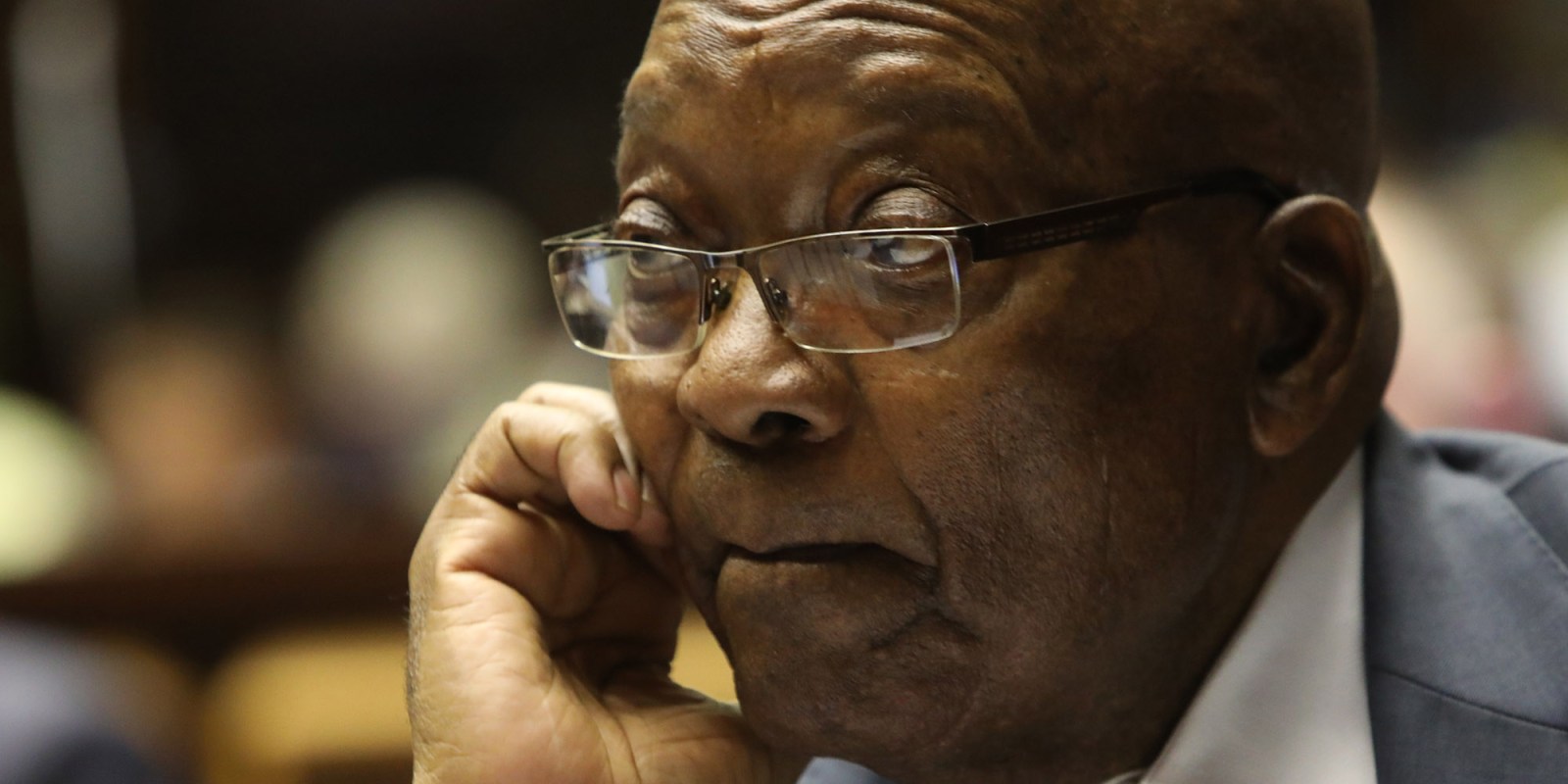 Proceedings are probably heading for postponement because the former president, Accused Number One, is currently without formal legal representation following his team’s withdrawal on 21 April.

The much-anticipated fraud, corruption and racketeering trial of former president Jacob Zuma is set to start in the Pietermaritzburg High Court on Monday, bringing to a head close on two decades of drama, intrigue and investigations into South Africa’s multibillion-rand Arms Deal.

But despite African National Congress VIPs like the recently suspended Ace Magashule and party leaders in KwaZulu-Natal saying they will be at court in support of Zuma, the hype is likely to be short-lived, with proceedings probably heading for postponement because the former president, and Accused Number One, is currently without formal legal representation following his team’s withdrawal on 21 April.

Zuma is accused of receiving 791 payments, totalling R4.1-million, between 1995 and 2004 from his former financial/economic adviser Schabir Shaik – who did the work without demanding a fee from Zuma – and Shaik’s companies, to help French arms manufacturer Thales, Accused Number Two, secure lucrative defence contracts from the SA government as part of South Africa’s 1999 armaments deal.

According to the State’s final schedule of payments from Shaik and his Nkobi group of companies to and on behalf of Zuma, the first known alleged sweetener to Zuma was made in October 1995, and the last in mid-2005.

Zuma is alleged to have used some of that money to pay off his debts, for rent, education and allowances for his children, and vehicle payments.

The payments to Zuma – which have been described as “loans” by various defence counsel – “make no legitimate business sense”, according to the State, because Shaik and his businesses were “cash starved” and had to borrow the money from banks – at the prevailing interest rates – to give the “loans” to Zuma interest-free. The “survival” of Shaik’s companies, according to the indictment, was reliant on Shaik finding new “profitable” business with the assistance of Zuma and Thales.

Senior prosecutor Billy Downer has maintained since first stepping into court after the charges were reinstated that the State is trial-ready and that Zuma has been employing delaying tactics. Zuma’s defence teams have disputed this, maintaining that the State has been delaying matters, and that the former president wants his day in court to prove his innocence.

In February this year, Downer termed it a “milestone” that Monday’s date was eventually decided on. Zuma’s legal team told the court at the same sitting that it had no qualms with the date. The trial was, at that stage, expected to run until at least the end of June.

But in April, Zuma’s instructing attorney, Eric Mabuza, filed a notice of withdrawal, taking with him Zuma’s legal team of Muzi Sikhakhane SC, advocate Mpilo Sikhakhane and Thabani Masuku SC, although Masuku is now being reported as willing to represent Zuma again. Nevertheless, Mabuza is expected to inform Judge Piet Koen on Monday why he has withdrawn.

While there has been no clear indication yet as to why Zuma’s team has stepped down, it is likely that the Supreme Court of Appeal ruling on 14 April that stopped the former president from accessing state funds to finance his legal battles – and that he may be liable for the R25-million he has already spent on such – could have played a part. Zuma maintains that he is cash-strapped, and has done so for years. He has previously told supporters outside court that he had to resort to selling “hats” and “socks” to pay for his legal team.

The events of the past month are yet another twist in the Arms Deal saga, which first came to public prominence in Parliament on 9 September 1999 when political stalwart Patricia de Lille (a State witness in the trial, and allegedly the first witness that will be called) placed a notice before Parliament to raise corruption allegations about the deal.

From this moment, a web of intrigue has ebbed and flowed depending on the political and social factors of the time, leaving in its wake damaged careers, lost opportunities, and a test for the rule of law and South Africa’s judiciary.

The indictment before the court goes to lengths to explain how the deal unfolded, and why Zuma is in the State’s crosshairs.

According to the indictment, the deal consisted of two processes – the formal “rigorous and scientific evaluation process conducted by various committees” and a “separate, and parallel process of informal meetings” in which companies interested in the contracts exerted influence “directly or indirectly on formal decision makers”.

A key driver of this informal process was not only the need to acquire a black economic empowerment (BEE) partner but rather the “right BEE partner” – one with strong political connections. Shaik’s relationship with Zuma, who became deputy president of South Africa in 1999, met the standard.

The first probe into the deal was known as the Heath Special Investigating Unit and was led by Judge Willem Heath. Its mandate was to investigate irregularities in the deal, starting in 2000.

In November 2000, Parliament’s Standing Committee on Public Accounts (Scopa) also recommended that a joint investigation into undue influence in the deal be conducted by the Auditor-General, the Public Protector, the National Prosecuting Authority’s erstwhile Scorpions investigative unit, and Heath’s unit.

After a protracted legal battle led by the official opposition, the Democratic Alliance, Mpshe’s 2009 decision was in April 2016 deemed irrational by the North Gauteng High Court, setting the course for a trial to eventually take place.

Part of the State’s case is that Shaik, on behalf of Thales, committed to paying Zuma R500,000 a year for protection against prosecution. On 19 January 2001, Zuma allegedly kept to his end of the deal when he told the Scopa chairperson, Gavin Woods, that there was no need for any investigation.

On 31 May 2005, despite Zuma allegedly trying to interfere in the probe, Judge Hilary Squires found Shaik guilty of fraud and corruption, in the Durban High Court. He described the relationship between Zuma and Shaik as one of “mutually beneficial symbiosis”.

Shaik was found guilty of two counts of corruption and one of fraud in 2005 and sentenced to 15 years in prison, but was released on medical parole in 2009.

On 14 June 2005, then-president Thabo Mbeki, who had denied any corruption in the Arms Deal when De Lille first raised the matter in Parliament nearly six years earlier, removed Zuma as deputy president of South Africa.

Unlike the step-aside rule the governing party is now trying to enforce, Zuma at the time kept his position as ANC deputy president.

Zuma’s political star continued to rise, culminating in him winning the vote to be ANC president in Polokwane, in 2007. Shortly thereafter he returned the favour and had Mbeki removed as state president.

In a watershed moment in April 2009, the then NPA head Mokotedi Mpshe dropped the charges against Zuma, claiming political interference in evidence, in what would become known as the “spy tapes”. This decision paved the way for Zuma to run unencumbered for state president in the 2009 national elections.

In 2011, Zuma set up the Arms Procurement Commission, headed by Judge Willie Seriti, to probe the Arms Deal. The commission sat for four years, at a cost of R130-million, and in 2016 concluded that it could find no trace of corruption in the deal.

However, the Arms Deal saga, often referred to as the ANC’s “original sin” in the fight against corruption, would not disappear.

After a protracted legal battle led by the official opposition, the Democratic Alliance, Mpshe’s 2009 decision was in April 2016 deemed irrational by the North Gauteng High Court, setting the course for a trial to eventually take place.

In 2019 the same court also set aside the findings of Seriti’s commission after non-profit organisations Corruption Watch and Right2Know successfully argued that the commission had misled the public in its findings.

Part of the argument put forward by the NPOs was that two shipping containers at the SAPS Directorate for Priority Crime Investigations’ Pretoria office containing 4.7 million computer pages and 460 boxes of evidence remained untouched.

Just last week, Sello Chiloane, the secretary of the Judicial Conduct Committee (JCC), informed two NGOs, Shadow World Investigations, and Open Secrets, that a complaint they had lodged against Seriti had been referred to the JCC’s acting chair, Deputy Chief Justice Raymond Zondo, for investigation.

Shadow World Investigations said in a statement in August 2020 that the real cost of the Arms Deal in today’s value is R142-billion. It also said that the last loan payments from the South African government to finance the 20-year-old deal would be made in October 2020.