The end of the road: Refugee leaders deported as Cape Town camps earmarked for closure 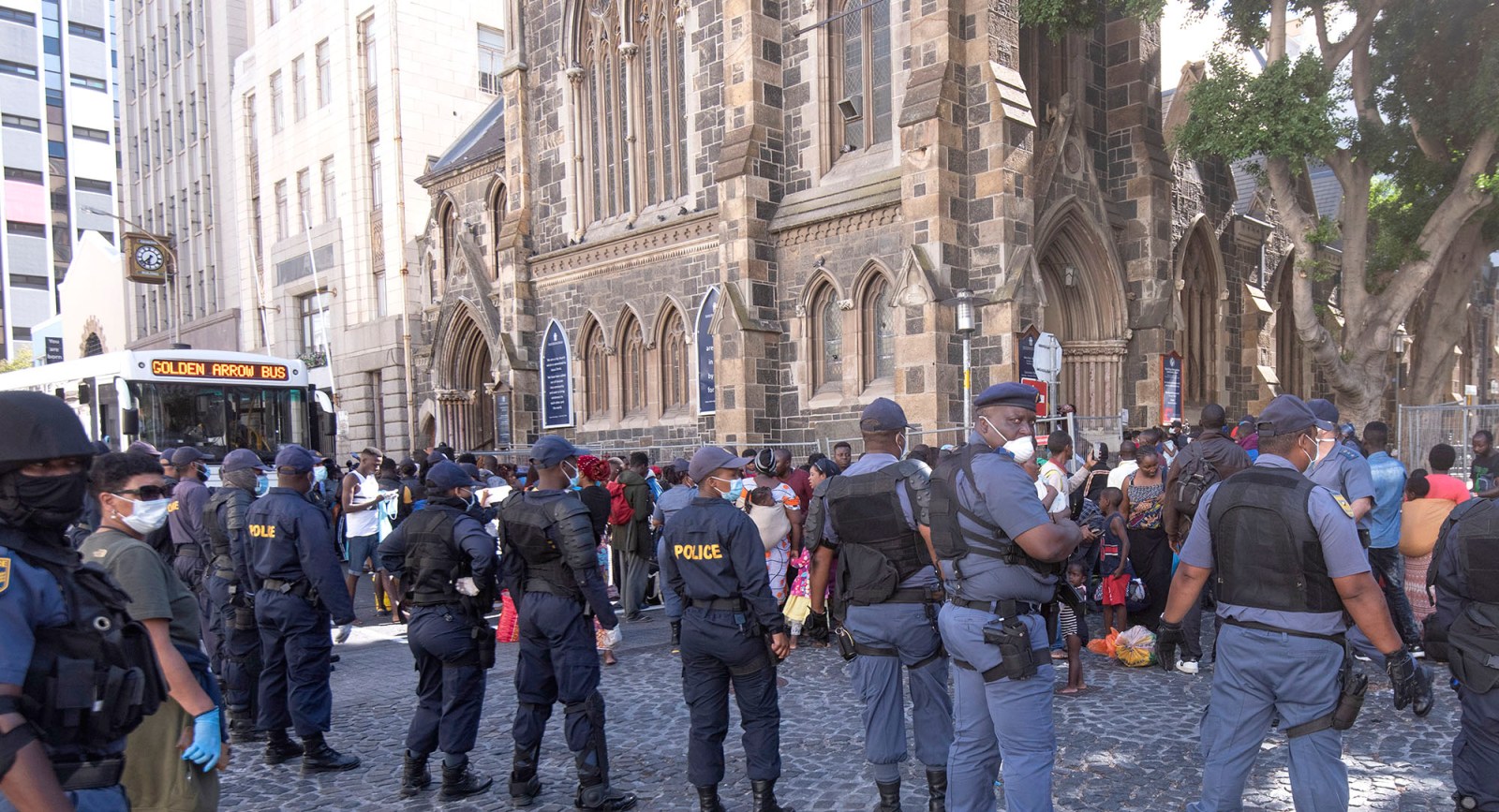 The refugees locked themselves inside the Central Methodist Church and refused to move on day seven of the lockdown on 2 April 2020. (Photo by Gallo Images/Brenton Geach)

The window is closing for refugees and asylum seekers protesting in Cape Town to either reintegrate into local communities or repatriate. But a small group of ‘hardliners’ are holding on to the vain hope of resettlement to Canada – a promise made to them by persuasive leaders who have since been deported or imprisoned.

Jean-Pierre Balous, Papy Sukami and Aline Bukuru made headlines as the leaders of an ongoing protest against xenophobic violence in South Africa.

In the demonstration, which began in October 2019 outside the offices of the United Nations High Commissioner for Refugees (UNHCR) in Cape Town, hundreds of refugees and asylum seekers demanded resettlement to Canada.

After being forcibly removed from the UNHCR offices, the group occupied the Central Methodist Church on Greenmarket Square. This continued until the Covid-19 pandemic struck when the group, which had split into two factions, was moved to separate, temporary shelters at Paint City and Wingfield.

The camps are now earmarked for closure on 15 May.

Protesters who had pinned their hopes on a one-way ticket to Canada are now left with two options: To reintegrate into communities in and around Cape Town, or be voluntarily repatriated to their countries of origin.

Those reintegrating have been offered three months’ rental and food supply.

However, concerns remain over about 350 “hardliners” who are refusing to leave the camps and continuing their demands for resettlement.

According to the committee, the hardliners are part of the faction led by Balous and his wife, Aline Bukuru, both of whom run a registered NGO called Women and Children at Concern (WCC). Balous is languishing in Prison, reportedly Pollsmoor,  after he was arrested for assaulting police officers during a court appearance in early March. He is at risk of deportation once his criminal case has run its course. He is due to reappear in court in June 2021.

Bukuru was deported to Congo on 31 March, along with Sukami, the leader of the rival faction.

In total, 32 protesters have been deported since October 2020. According to Home Affairs they were undocumented persons who did not qualify for asylum and international protection.

For Sukami, who was also battling a criminal case, his asylum-seeker papers were rejected by the Refugee Appeals Authority of South Africa (Raasa).

He was arrested in January 2020 on charges of assault and robbery relating to an incident outside the UNHCR offices in October 2019. Accompanied by a few men, Sukami allegedly beat and robbed two Congolese freelance journalists.

The journalists, Serge Shaumba and Jurol Loemba, accused Sukami of being a propagandist and the ringleader of a gang.

Steered by Balous, the three protest leaders had fashioned themselves as champions for refugee rights.

On Sukami’s Twitter page he has frequently spoken out against the Department of Home Affairs, in one instance comparing xenophobia to the apartheid regime. His Twitter bio labels him as a human rights activist, an evangelist, civil engineer and chairperson of a Congolese political party called Kongomani Green.

According to the organisation’s Twitter page set up in May 2019, the party is in “exile” and based in the US, Norway, South Africa, the UK, France and Belgium.

In a social media post, Sukami said the party’s objectives were to protect Congo’s environment:

This is the reason we are building KONGOMANI GREEN PARTY to fight against deforestation and train people in reforestation, to protect the environment and bio, to implement clean energy in rural areas (solar in exchange for reforestation) .. We need your support

“There was a story that people were running away from their countries because they were running away from persecution, yet no one is persecuting them and one is even able to form a political party. He tweeted about it for the whole world to see without the DRC chasing him away. Meaning when he came here and claimed to be a refugee, that was a lie already,” he said.

Sukami denied on social media that he had been deported but rather voluntarily repatriated to the DRC.

He had been Balous’s right-hand man until the pair had a violent falling out in December 2019, which caused a factional split. Balous was accused of raising money through his non-profit WCC for personal gain.

Balous’s supporters claim the NPO pioneered the protest. According to its website, WCC, which is based in Grassy Park, Cape Town and embedded in a Christian ethos, “strives to uplift refugees and asylum seekers, especially women and children”.

Fingers were often pointed at Balous for misleading protesters into believing resettlement was imminent although the UNHCR had announced that the demand for group resettlement was not possible under international law.

Balous, who is proficient in English was often the intermediary between authorities and the protesters, a position of power that was considered exploitative.

During a court case in February 2020, where the City of Cape Town was granted a court order to remove protesters who were sleeping outside the Central Methodist Church (Sukami’s faction had been banished outside), Judge Daniel Thulare accused Balous of “abusing the right to protest” and creating a “a self-governing territory within the City of Cape Town”.

The group had initially sought shelter in the church after being forcibly removed from the UNHCR offices. They, however, overstayed their welcome and refused to leave. By the time they were relocated to Paint City and Wingfield when the country went into lockdown, they had caused approximately R600,000 worth of damage.

He was accused of harassing, intimidating and/or assaulting anyone who challenged his authority. New Frame reported that a number of refugee and migrant organisations in Cape Town had distanced themselves from Balous and at least three people had protection orders against him.

According to New Frame, those who know Balous claim that he and his wife had tried unsuccessfully to be resettled to a third country more than once.

Balous was also accused of instigating an attack on a delegation of faith leaders who were engaging protesters at the Central Methodist Church in November 2019. Anglican Archbishop Thabo Makgoba, SAHRC Commissioner Chris Nissen and Reverend Alan Storey were among those assaulted.

A number of people claimed that Balous had tried to gouge out the eyes of Pastor Moise Awilo, who was part of the delegation.

He was often described as a cult-like leader. Balous often used Christianity as a justification for his cause and in one instance, during a rally in the Central Methodist Church attended by Daily Maverick, Balous compared himself to Jesus. Though the migrants did not own the building, people were searched and names taken before anyone could enter the church. There was also a rule that no one except the group’s “leadership” could speak to the media.

His wife, Aline Bukuru, had initially led a similar protest in November 2019, outside the UNHCR offices in Pretoria. The protest was quashed after the group forced their way onto the UNHCR premises and were removed by police after the North Gauteng High Court granted a court order for the City of Johannesburg to enforce its by-laws.

Bukuru then made her way to Cape Town where she joined the group protesting at the Methodist Church and assumed leadership once her husband had been arrested.

Safety and security mayoral committee member JP Smith warned that the “hardliners” who refuse to leave the temporary shelters once they close down may be dealt with by the courts.

“If at the end of that there is a group that adamantly resists reintegration [at] the sites, both of which belong to the Department of Public Works, then they will be obligated to determine how to remove persons from those properties. That will have to take the form of an eviction application to the court.” DM