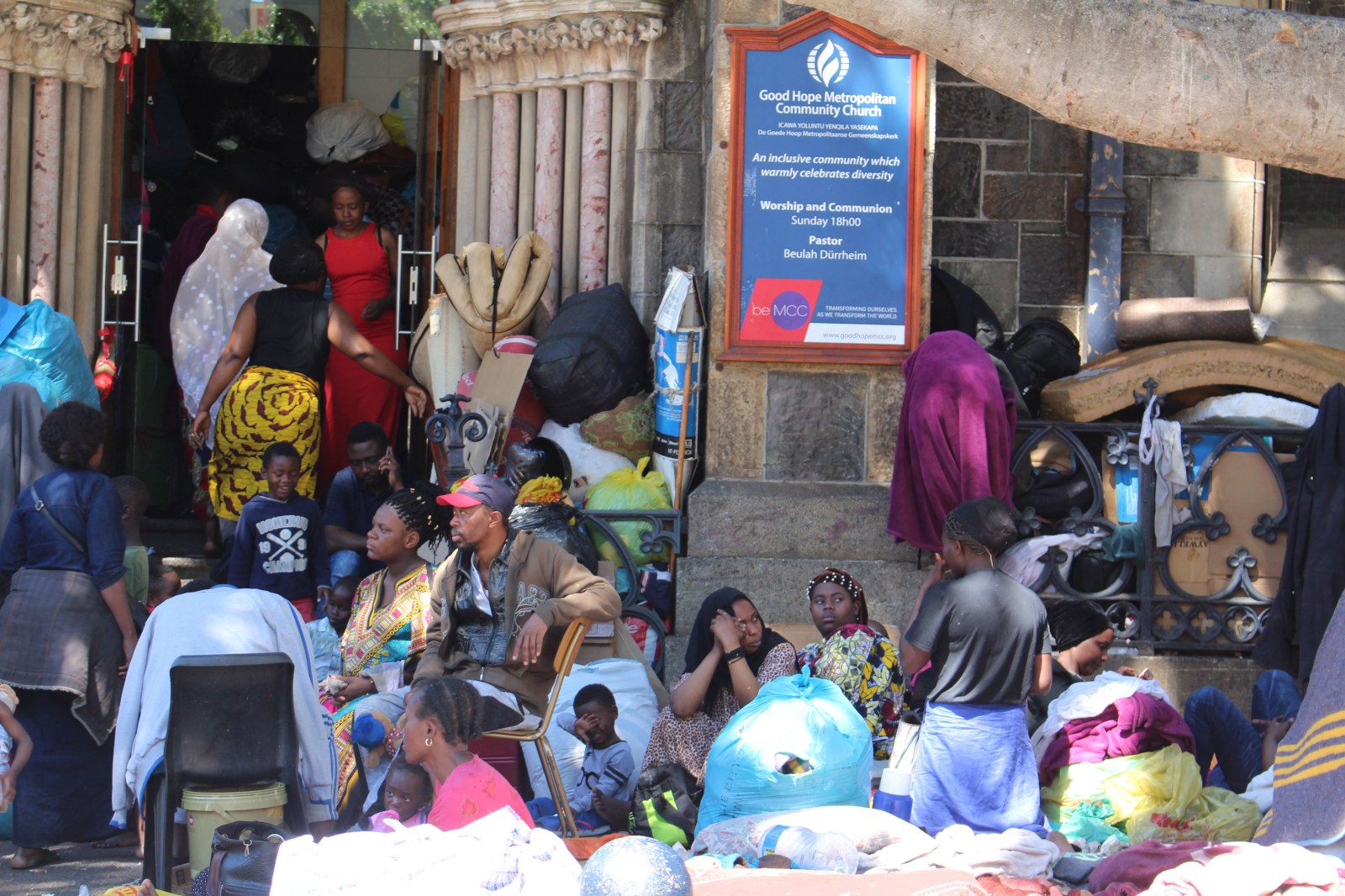 Protesting migrants have been seeking refuge at the Central Methodist Mission for two weeks since they were evicted from the UNHCR offices last month. 15 November 2019. Photo: Sandisiwe Shoba

Two people were injured after a dialogue with refugees at the Central Methodist Mission turned violent. Meanwhile, protesting migrants who had scaled the fence of the UNHCR offices in Pretoria were removed from the office grounds after the organisation laid a charge of trespassing. The group was facing eviction following a court order from the North Gauteng High Court.

The delegation was briefing the group on the outcome of a meeting between refugee leaders and stakeholders including Home Affairs, the Human Rights Commission and civic organisations on Monday.

The discussion, which had begun peacefully, was derailed when an unknown pastor who was apparently from NGO the Adonis Musati Project took the mic.

According to Nissen, someone from the crowd rushed the pastor, then Jean-Pierre “JP” Balous, one of the prominent refugee leaders knocked the man to the ground. A scuffle then broke out.

After failing to calm the crowd down, Storey and the delegation were shielded and escorted out of the building.

“They hit the archbishop over the head and my finger got hurt and I hurt my knee,” explained Nissen.

Storey was not injured, but he was visibly shaken when he spoke to Daily Maverick:

“The situation is now calm, and we pray and hope that people can…find a way forward.”

Meanwhile, a group who had camped outside the UNHCR offices before forcing their way onto the Pretoria premises was forcibly removed by police on Friday after a charge of trespassing was laid and before a court order issued by the North Gauteng High Court on Wednesday. The court order which gave them three days to vacate was enacted.

According to a press statement released by UNHCR on Thursday, the Pretoria High Court had also ordered local authorities to “identify the foreign protesters camped outside the UNHCR offices in Pretoria and to determine who among them is legally authorised to remain in South Africa.”

Protesters at the Methodist Church in Cape Town were also asked to leave the church because of health and safety concerns:

“I have asked, respectfully, for people to leave the sanctuary and it is my understanding that people have accepted that,” said Storey who had published an update on the CMM website, explaining that sheltering the refugees was always a temporary solution

“The risk of a fire in the sanctuary remains. Plainly put: if there is a fire, people will die. There are simply not enough exits for the number of people inside the church to vacate fast enough. This is especially since so many of those inside the sanctuary are young children and babies,” he wrote, adding that informal traders in Greenmarket square were also losing business.

Nissen explained that three demands had been tabled during Monday’s meeting:

· Resettlement on a case-by-case basis;

· Repatriation to their home countries; and

All options were again rejected. The group is still demanding mass resettlement.

Balous said that should this fail, they will pack their bags and “walk to the nearest border,” namely Namibia.

“That is our last report.”

The Commission sent out a statement earlier on Friday condemning the attack and called for those responsible to be “arrested”.

They, however, cautioned South Africans against using the incident as an “excuse” to engage in xenophobic behaviour.

“We urge people to not use this situation to spark xenophobia.”

Balous said the refugee leadership had not been consulted about Friday’s meeting. He felt they were undermined.

“They tried to go behind us,” he said, explaining that Storey told him at around 6am to gather everyone in the church.

Nissen felt that people were being kept “hostage” in the church because they could not make their own decisions.

Balous, who had heard this allegation before said it was untrue.

But he clarified that the protesters do not speak for all refugees in South Africa.

Balous has also repeatedly made allegations that organisations such as The Adonis Musati Project and the Scalabrini Centre for Cape Town were “corrupt” for pocketing funds they received from UNHCR.

However, Scalabrini Director Miranda Madikane said these were baseless claims:

“Scalabrini Centre is not a UNHCR implementing partner organisation and the organisation has never received funding from the UNHCR. Our income and expenditure report is available in our Annual Report on our website. The organisation is externally audited annually, by independent auditors.”

The organisation said corruption allegations were taken seriously and anyone with knowledge of such activity should come forward.

“[We] urge anyone to forward information and evidence to our Director or Board of Trustees or any senior staff member or Scalabrini reception – all contact details are available on our website,” she explained.

“Scalabrini also has an internal complaints procedure, this form is freely available at Scalabrini’s reception desk or by emailing [email protected] and we follow up on any complaint received.”

Papy Sukami, another of the refugee leaders said that a final meeting would be convened on Tuesday, if their demands are not met then, they will make plans to leave for Namibia.  DM