Site of struggle: Dual battle for housing and dignity unfolds in District Six 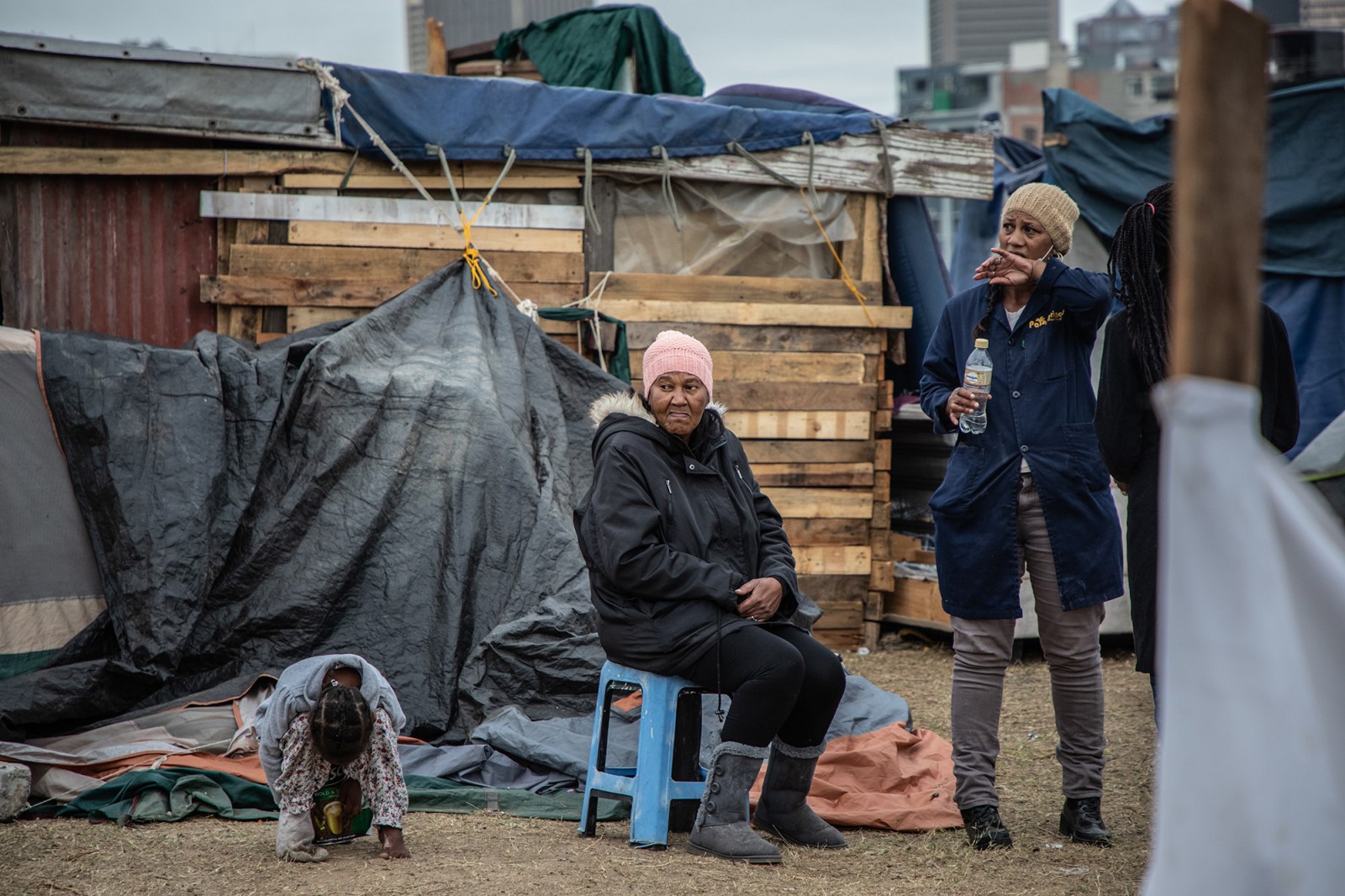 A group of people who have erected tents and occupied land opposite Cape Peninsula University of Technology (CPUT), in Cape Town held a protest demanding that the City of Cape Town respond to their housing needs on Wednesday, 5 May 2021. (Photo: Victoria O’Regan)

In District Six, Cape Town two groups are seeking housing and dignity — long-standing land claimants and more recently, a group of backyard dwellers that has moved into an empty field which the City of Cape Town now has an interdict against.

Contestation over housing is rife in District Six, Cape Town where occupiers are moving onto municipal land that the city said is reserved for land claimants, who were forcibly removed under the Group Areas Act.

On 1 May, the Western Cape high court issued an interdict against one such group occupying a portion of land in District Six. The occupation was started by the  Social Liberals for Backyard Dwellers (SLBD), a group made up of persons on housing waiting lists but who have yet to receive housing from any sphere of government. The SLBD claims the occupation was started by people who were evicted from their rental homes on the Cape Flats, due to them not being able to pay rent during the Covid-19 lockdown.

‘They must go to constructive work’

On a field adjacent to the District Six campus of the Cape Peninsula University of Technology (CPUT) lies the occupied site, which has no visible taps or ablution facilities. Shareefa Nolan, chairperson of the SLBD, said in an interview that the mobilisation for the occupation was started via Whatsapp for people who are on housing waiting lists. On 19 March, the group started its occupation opposite CPUT.

On Human Rights Day (21 March), Councillor Malusi Booi, the City of Cape Town Mayoral Committee Member for Human Settlements had seen the group occupying the site and questioned their presence, according to Nolan.

Nolan told Daily Maverick the group felt like they were being treated like criminals by the City and law enforcement. While the interview with Nolan took place, Daily Maverick observed five Metro Police cars, along with nine Metro Police officers who were monitoring the group. “They must go to [do] constructive work,” said Nolan, explaining that while crime took place in Cape Town, the officers were more preoccupied with keeping an eye on the occupied site. There are 68 families camped at the occupation site, consisting of 39 children, 70 women and 40 men said Nolan.

Nolan said Booi should clean up his mess or “he must step down”.

On 1 May, the City of Cape Town CoCT was granted an interim order against the occupiers. The Western Cape high court states that the group cannot unlawfully occupy or invade the property, erect or complete any structure on the property, or occupy any vacant structures on the property. In addition, the group cannot intimidate, threaten, harass, assault or interfere with “the City’s officials, councillors or any persons acting on their behalf or involved with law enforcement at the Properties”.

Nolan said the order is “null and void” because the interdict went “viral on Facebook before it was sent to us”. The group only received the order on 4 May despite the order being granted on 1 May, she said.

Nolan accused housing officials of corruption and giving housing preference to people from the Eastern Cape over people who originally come from the Western Cape. When asked by Daily Maverick, she was unable to provide proof of her claim.

62-year-old Elisabeth Davids, from the Kapteinsklip informal settlement in Tafelsig, Mitchells Plain joined the occupation “to fight for my house — it’s a woman’s right”.

In 1978, Davids put her name on the waiting list but has not received a house yet. “They say they don’t have my papers — but I have everything,” she said. It is not clear which housing waiting list Davids is on, whether municipal or national government.

On the other side of the housing issue, is the District Six land claimants who are still waiting to be reintegrated back into the area. Nolan said her father was among those forcibly removed from District Six and that the SLBD occupation did not affect building homes for claimants.

“They can demolish that building,” said Nolan, as she pointed to the CPUT building across the road and added, “it’s stolen land”.

Meanwhile,  less than 100 metres away from where the land occupiers are situated, individual land claimants are waiting to hear if they will be allocated one of 108 housing units which the Department of Agriculture, Land Reform and Rural Development is in the process of finalising. The units are due to be handed over to claimants at the end of May. 81 units will be handed over to claimants who lodged their land claims first, while the 27 remaining units will be allocated on the basis of old age, health and indigent.

But uncertainty remains over which claimants will be allotted one of these 108 housing units. One hopeful claimant is 78-year-old Julygah Ismail, who was born in and spent time living in District Six.

“I am so sad and frustrated if only I can get a house before I die — a house of my own comfort,” she told Daily Maverick. In 1978 while living with her husband who was a dock worker, she was pregnant with her fifth child. During her pregnancy, her husband left her. Then she applied for a government house in the area. At that point, District Six was in the middle of the Group Areas Act’s forced removals.

The apartheid Act forced “non-white” people out of District Six and Ismail was sent to live in Hanover Park after she gave birth. She then moved to Kensington and later lived in other areas in Cape Town. Ismail then moved into her daughter’s home in Woodstock, but this relationship has since endured strain.

But Ismail’s housing documents disappeared during the late 1970s and 1980s. Ismail told Daily Maverick she had gone to Land Claims offices asking about housing. She said she had been told things such as ‘the government doesn’t have money’ or she must be patient with the redevelopment. “From 1978 — 44 years — I am still waiting for my own home,”  she said.

While both groups wait for housing, squabbles between political and government spheres continue.

The department of Agriculture, Land Reform and Rural Development missed a meeting with the provincial legislature’s Human Settlements committee.

Committee chairperson, Matlhodi Maseko said, “as a Member of the Provincial Parliament, I will call for the House to debate the status of District Six and the restitution project”. Maseko and her political party, the Democratic Alliance have been calling for control of the restitution project to be devolved away from the department and given to the CoCT and the Western Cape provincial government to run.

Reggie Ngcobo, spokesperson for the department of land reform said the meeting was for information sharing with the province and the non-attendance of “this meeting does not pose any risk or delay to the work the department is undertaking to implement its court bound plans in District 6”.

In November 2018 the District Six Working Committee was granted a structural interdict in the Land Claims Court that forced the department to provide the court with timelines on the restitution of housing.

Ngcobo said the first meeting was postponed because it fell on a by-election day (20 April) and by the time the new meeting (28 April) had been set up, the department had “prior commitments” and could not attend.

On Thursday 6 May, News24 reported President Cyril Ramaphosa as saying “we will finally resolve the District Six matter, and people will go back to District Six” during an iftar hosted by the Muslim Judicial Council.

But for claimants like Ismail, the wait for a home in District Six remains a long time coming. Should Ismail return to the area, she would want to live with her son and grandchild, who currently live in Lansdowne. On the other hand, the SLBD group say they won’t leave until their demands for housing are met. DM