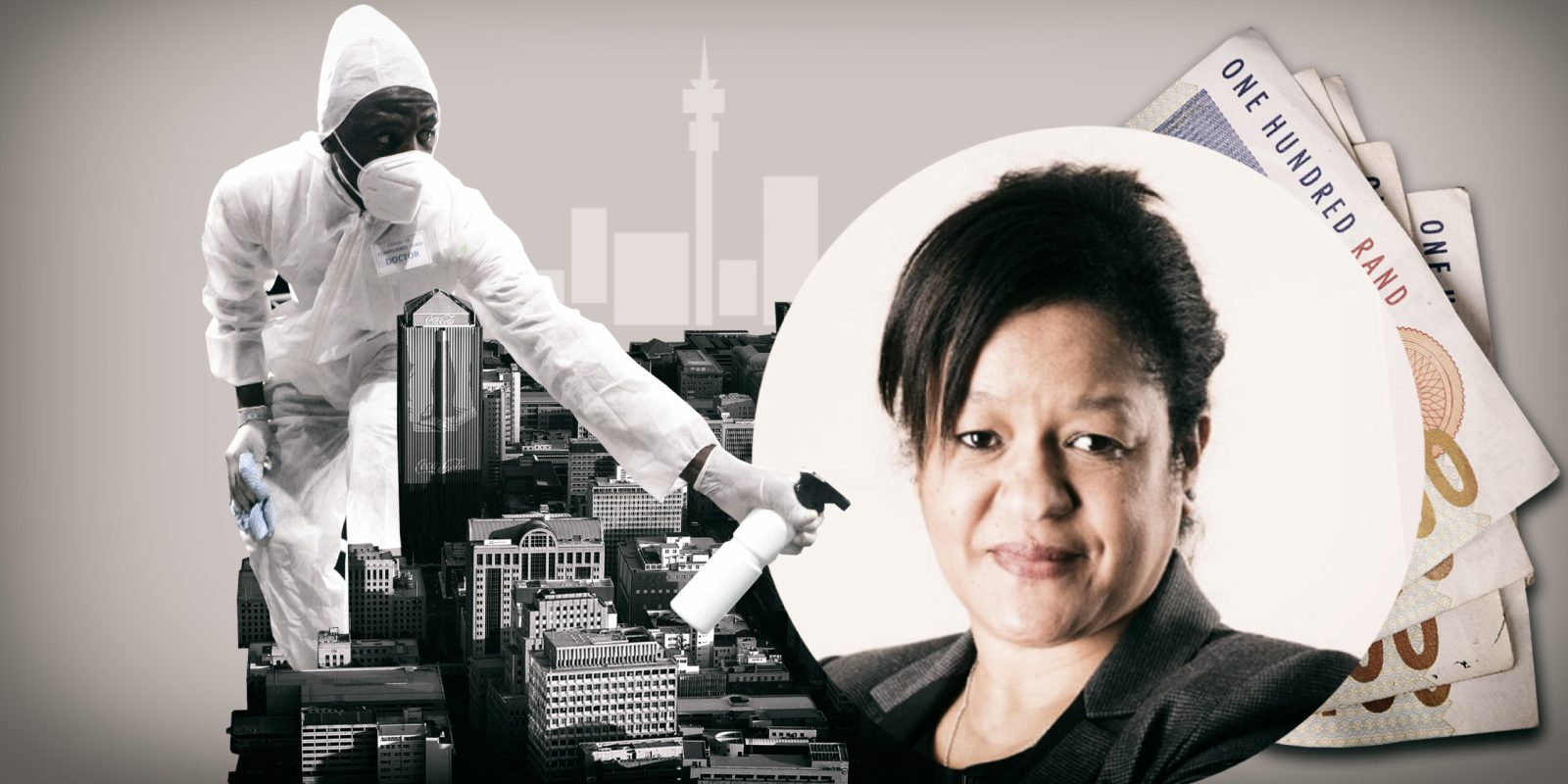 The Special Investigating Unit found evidence suggesting the CEO and CFO of the Johannesburg Property Company committed financial misconduct that led to more than R18m in fruitless and wasteful expenditure. And yet, the institution’s board wants to lift their suspensions so they can manage the company’s almost R1bn budget.

Johannesburg Property Company (JPC) CEO Helen Botes and CFO Imraan Bhamjee are due to return to their posts soon despite a Special Investigating Unit (SIU) report revealing evidence that the pair may be guilty of financial misconduct regarding deep cleaning and sanitising contracts awarded during the coronavirus pandemic.

Botes and Bhamjee were suspended in September 2020 after investigations into the JPC contracts were tabled in the Johannesburg City Council.

In March 2021, the SIU informed acting Johannesburg City manager Floyd Brink and acting JPC CEO Asanda Majova it had completed its investigation into the contracts and found evidence that Botes, Bhamjee and three other officials may be guilty of financial misconduct.

Instead of disciplining Botes and Bhamjee, the JPC wants to lift their suspensions, disregarding the SIU’s findings and raising questions about the anti-corruption body’s powers.

The SIU detailed how the CEO and CFO allowed staff to negotiate contracts that violated both standard and emergency procurement procedures and failed to ensure JPC resources were efficiently and transparently managed.

JPC chairperson Moeketsi Rabodila told Daily Maverick the board had sought legal advice on the pair’s suspensions and lifted them in April 2021.

The board was replaced in February 2021 and a JPC source told Daily Maverick that Rabodila allegedly failed to inform the new members of the board that Botes and Bhamjee had been subject to disciplinary charges in late 2020 and that the process had since stalled.

Rabodila, who was reappointed to the new board, denied he had misled his fellow directors, but he did not directly answer questions on whether disciplinary charges had been laid against the pair or what happened to the process.

“The board was advised on the process that unfolded around the suspension of Ms Botes and Mr Bhamjee. The board was never told by me or anyone that the officials should be reinstated but, in fact, resolved to uplift the suspensions after satisfying itself on the facts surrounding the suspensions,” said Rabodila.

“The board, having taken legal advice, is of the view that the current suspensions could have been avoided with diligence. The two executives will be returning to work soon, in line with the board resolution in this regard.”

Rabodila said the board was processing the SIU report and viewed its findings “in a serious light”.

“The board will take any action deemed necessary once it has satisfied itself on the impact of its contents and standing.”

Rabodila informed Mayor Geoff Makhubo of the plan to reinstate Botes and Bhamjee and the mayor responded by asking whether the JPC had considered the SIU report and the recent court judgment in the case between former Gauteng health MEC Bandile Masuku and the SIU. Rabodila said the board had responded “factually and respectfully” and that its decision was based on legal advice.

Makhubo’s spokesperson, Mlimandlela Ndamase, said the mayoral committee had noted the JPC board’s decision to reinstate the CEO and CFO and resolved that the board consider the SIU report before taking any further action, suggesting that Botes and Bhamjee might not be able to return to work as soon as expected.

SIU spokesperson Kaizer Kganyago said, “We are worried about these rumours that the suspensions will be lifted. The SIU is in discussion with JPC leaders about the reported lifting of the suspensions and the disciplinary charges it recommended against the five officials.”

The JPC manages the City of Johannesburg’s property portfolio of 64,000 properties, valued at R8.6-billion and covering 39,000ha across seven municipalities, according to the JPC’s website. The JPC had a budget of R968.6-million, according to the city’s 2020/21 budget. Botes has run the JPC since 2009.

According to a report commissioned by the city and compiled by law firm Kunene Ramapala Incorporated, the contracts that have thrown the JPC’s leadership into turmoil emanated from the city’s executive adjudication committee decision on 16 March 2020 that the city and its entities needed to respond to the coronavirus pandemic.

The JPC then decided to contract service providers for deep cleaning and sanitation at the city’s Metro Centre, taxi ranks and markets. According to the Kunene report, the emergency procurement process was flawed and it appeared that the four service providers were handpicked by JPC officials.

JPC staff claimed to have advertised a request for quotation (RFQ) on 20 March 2020. The Kunene report found no evidence of such an advert. Due to urgency, the JPC did not follow standard procurement procedures and contacted a number of companies directly.

On 21 March 2020, five companies attended a compulsory “site visit”, which appeared to be merely a briefing session, and each company was awarded contracts, with two deciding to act as a consortium.

While the JPC purportedly gave interested bidders until 23 March 2020 to submit RFQs, the Kunene report said that the compulsory briefing session two days earlier, attended by companies contacted by JPC staff, essentially ruled out other companies from consideration.

“It is unconceivable [sic] that if there were service providers who saw the RFQ advert and submitted their quotes on 23 March 2020 they would have been considered for the bid without having attended the ‘site inspection’ visit,” reads the report.

The four companies awarded contracts were KM Mashigo Trading, Omphile Turnkey & Solutions, Triple SL Tech and Mizana Trading. None were experienced in providing cleaning or sanitising services and, oddly, the RFQ required bidders to be registered with the Construction Industry Development Board (CIDB).

The Kunene report said the JPC could have saved money by either using the city’s own insourced cleaners or considering experienced cleaning companies. It could not conclude that the companies acted in collusion or received guidance on prices from JPC staff, but the report raised serious concerns.

According to the Kunene report, there were only slight differences in the quoted prices in the four RFQs and after negotiations the JPC actually agreed to higher-than-quoted prices. The four companies were scheduled to begin work before their contracts had been concluded. The JPC entered into agreements before the companies had submitted some of the required documents.

The report found that the four companies were paid R22.8-million, with almost R5.7-million allocated by the JPC for unforeseen costs unrelated to Covid-19, including plumbing, gardening, water provision and collecting trash.

The report found that the JPC had flouted procurement regulations, even after considering the deviations allowed during the coronavirus pandemic. Rabodila, however, said the Kunene report was “inconclusive”.

The report, finalised in January 2021, said while there might have been negligence on the parts of CEO Botes and CFO Bhamjee, it could not make conclusive findings as they had not participated fully with the investigation. It recommended, however, that the disciplinary processes against the pair continue.

It’s unclear whether Ramaboea, Mzobe and Mntungwa faced disciplinary hearings. Asked whether any officials had been disciplined over the cleaning and sanitation contracts, JPC chair Rabodile reiterated that the board was processing the SIU report.

DA Johannesburg caucus leader Leah Knott said it was strange that the JPC suspended officials for suspected wrongdoing and then reinstated them after the SIU found evidence of their financial misconduct.

Rabodile maintained the JPC was lifting the suspensions against Botes and Bhamjee based on legal advice. The chairperson, who has served on multiple boards during Botes’ tenure, said he had a professional and courteous relationship with the CEO and CFO and denied he was trying to reinstate an ally to her powerful position.

“The claim of an alleged alliance between Botes and myself is unfounded, and I reject this claim outright,” said Rabodile.

While the SIU is in talks with the JPC about reinstating Botes and Bhamjee, and the mayoral committee appears to have put a limit on the JPC’s decision to act without first considering the SIU’s investigation, the board’s decision to lift the pair’s suspensions highlights the SIU’s limitations as an anti-corruption body.

“They do not have criminal jurisdiction and do not even have the kind of binding power of recommendation that an institution like the Public Protector has, as was confirmed through the Nkandla judgment,” said Karam Jeet Singh, head of legal and investigations at Corruption Watch.

“While significant, it is unrealistic to expect more from the SIU; they can’t even investigate without a proclamation. There are gaps in the current multi-agency approach to fighting corruption, including ensuring the effective disciplining and removal of implicated officials.”

Singh added, “While it remains open to debate, only a legislatively empowered dedicated anti-corruption agency with broad policing powers is sufficient to tackle the corruption challenges we face — an agency with the power of arrest, prosecution, asset recovery and directing consequence management for misconduct by employees and officials within state agencies.” DM