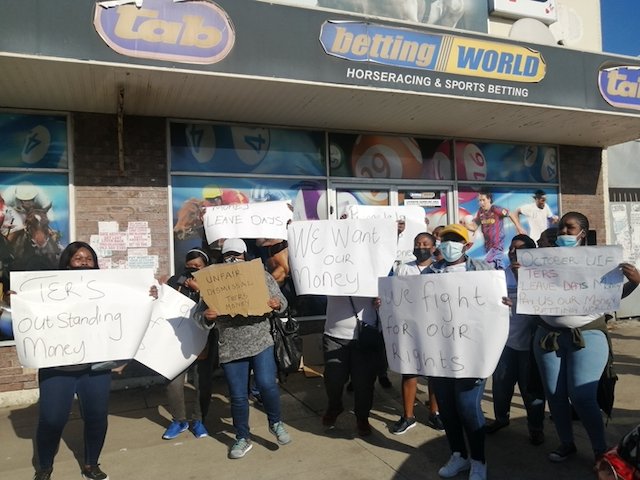 The holding company is in business rescue after the pandemic shut down the horse racing industry.

At least five branches of the business — Kariega, Crown Hotel, KwaNobuhle, New Brighton and Laboria — have not reopened since they closed under the Covid-19 lockdown in March 2020.

The holding company, Phumelela Gaming and Leisure, is in business rescue.

According to the Daily Maverick in May last year, Phumelela had furloughed 85% of its 1,600-strong workforce when the nationwide lockdown suspended activities in the horse racing industry.

A former manager at Kariega Betting World, Noxolisa Mqina, who joined the protest, said, “We are 40 workers from six branches. Since the lockdown started we were all told to go home until Covid-19 is controllable. We were promised that we will get our April payment, UIF-TERS and leave money while sitting at home. Instead, we were only paid our TERS from May until September. But we never received our April salaries.”

“In September, all eight workers from the Commercial Road branch returned to work because it is the oldest and most productive branch. But nothing was said about the other five branches,” said Mqina.

“I have been working here since 2016. The shutdown has robbed my two sons of an opportunity to continue with their second-year studies at Walter Sisulu and Nelson Mandela universities … It’s even hard to buy food. My husband is also unemployed.”

Yandisa Camagu, a former manager at Commercial Road, said, “In September our branch reopened. But on 31 October the company told us we have been retrenched. We were then replaced by staff from Fairview Race Course.

“I have been battling to send my two children to school … I depend on my mother and boyfriend for financial support,” she said.

Last week, Donna Adriaanse, a divisional operations manager, told GroundUp, “Please note that Phumelela is in business rescue and we are not authorised to engage with the press.”

Vikash Doorgapershad, a regional controller for Betting World, met with the protesters when they closed down the branch on Friday morning. He advised them to send him all their documents and bank details. He promised that all the monies will be paid as soon as all the required documents are received. DM