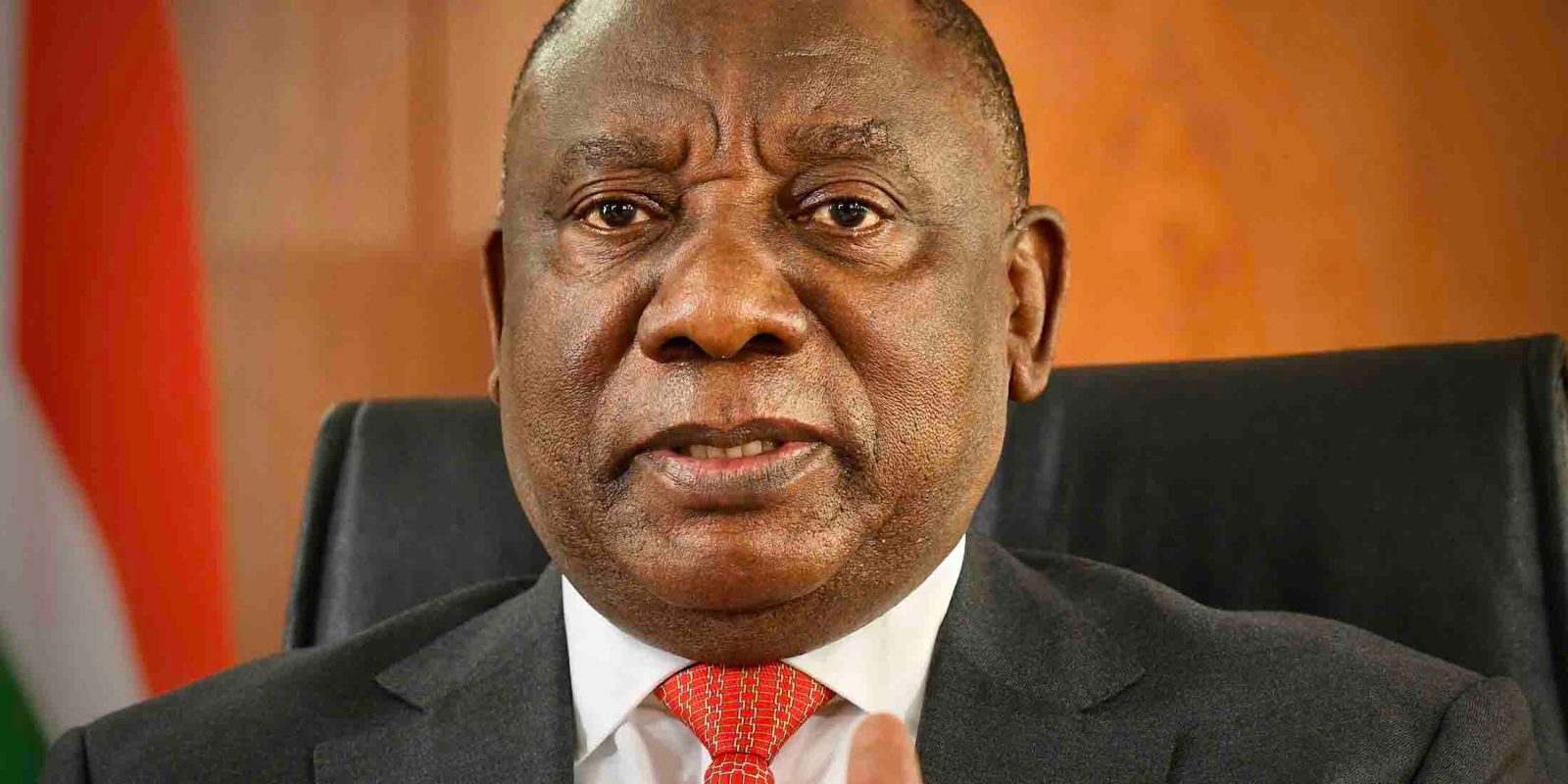 After ignoring EFF digs over his ‘suspension’, President Cyril Ramaphosa snapped at DA leader John Steenhuisen, telling him that what’s happening in the ANC wasn’t his business. But the ruling party’s factional battles remind one of the saying about fighting elephants and grass being trampled.

A few hours before his Q&A session in Parliament, President Cyril Ramaphosa took the bull by the horns: the suspension letter sent to him by suspended secretary-general Ace Magashule was a non-starter and had no standing, he told the ANC parliamentary caucus.

Daily Maverick was told the issue was raised during the president’s opening remarks which also touched on the October municipal elections and the Covid-19 vaccine roll-out. By being the first to raise the matter of Magashule’s letter, Ramaphosa effectively prevented disruption in what is a factionalised ANC parliamentary caucus.

The very public spectacle of an ANC meltdown – with a suspended secretary-general suspending his suspension by appealing against it and then suspending his party’s president instead – will  move behind closed doors at the weekend when the national executive committee (NEC) meets.

The issue may have been done and dusted in the ANC parliamentary caucus, but it wasn’t quite over in the House.

The EFF took advantage of the ANC’s factional battles right from the outset, questioning why Ramaphosa was appearing on the virtual platform.

“Parliament has not heard this story you and your chief whip are talking about. So there is no question about that. We are here to be addressed by the president of the country,” said Tsenoli.

And with that, the way was cleared for the Q&A session to begin, with Ramaphosa being beamed into the House on large television screens. However, the opposition was not yet done with the suspension issue.

DA leader John Steenhuisen pushed all the president’s buttons, talking about the ANC internal battles and the government’s slow Covid-19 vaccine roll-out that has put South Africa in 33rd place  in Africa.

“You are so caught up with the internal battles of the ANC while this pandemic rages. You are busy waging a factional war while a third wave looms. We are in May, while not a single [Covid-19 vaccine] dose has been administered,” said Steenhuisen.

“Will you take responsibility for this failure?”

“I’m wondering what Mr Steenhuisen ate at lunch. It seems he’s a very angry young man,” responded Ramaphosa, saying he would not go through the “waffle” from the opposition leader.

“When you were involved in your own battles in the DA, you never heard us say anything. We did not comment because it is not our space… What is happening in the ANC is not your business. It is ANC business.”

It was an unusually tense moment, and quite uncharacteristic of Ramaphosa who usually excels at controlling the optics. Or spinning criticism into a positive, as he did later when talking about how the unprecedented Covid-19 vaccine roll-out was like the successful antiretroviral treatment programme. He said government was pulling out all the stops to secure South Africans’ health.

Ramaphosa said there were certain aspects of the vaccination campaign that were beyond government’s control.

“We are not the only country that has been short-changed… The mishaps we have suffered have been completely out of our hands.”

“I am confused if you are legitimately in Parliament. It seems the member has been suspended. Anything that you do… amounts to fraudulent activities.”

It took a while for the ANC to raise a point of order. When it came, it was about the use of the word “fraudulent”, which would need a properly motivated substantial motion. After heated exchanges, Malema withdrew the remark, then squeezed in another question about plans to include the private sector in the vaccine roll-out “because we know the ANC state has no capacity to vaccinate…”

“We are not in the business of making transactions over the lives of our people… We do not enter into transactions to advance our own interests,” said the president, adding later, “Some of us don’t sleep much because we are continuously concerned about the lives of people of South Africa.”

The ANC was slow to get a point of order going. But eventually ANC MP Xola Nqola did – the National Assembly, which elects the president, had not removed the president – followed up by deputy president David Mabuza’s parliamentary counsellor, ANC MP Hope Papo:

“There’s no letter from the ANC (to Parliament) withdrawing a member… (Ramaphosa’s suspension) is a myth. It must be rejected with contempt. The NEC has not made a recall.”

The presidency had focused on the Covid-19 vaccine roll-out programme and responses to gender-based violence, which Ramaphosa has called “the other pandemic”.

The US offer to waive intellectual property rights on Covid-19 vaccines came up, particularly relevant given South Africa had used its position in the World Trade Organisation to push for just that.

“It goes to show the influence we have as a county working with others,” was how the president put it. “Vaccine imperialism and nationalism by more developed countries should come to an end.”

In South Africa, plans for the Covid-19 vaccination programme to reach all adults would soon be communicated.

Regardless of thuma mina moments wearing thin and tiredness, Ramaphosa turned a National Freedom Party question on whether the ANC – because of corruption – would recuse itself from the municipal poll, into an early electioneering volley, perhaps triggered by his previous comments to the ANC parliamentary caucus.

“The ANC will participate in the forthcoming elections with a great deal of enthusiasm… Our people still have confidence in the ANC,” replied Ramaphosa. “They can see the ANC is in the process of renewing itself… Our people want us to continue addressing their aspirations and fulfilling their dreams, which we do on an ongoing basis.”

But during Thursday’s three-and-a-half-hour Q&A session, Ramaphosa looked and sounded tired. It’s difficult to be a cheerleader for a governing party intent on galumphing along. DM