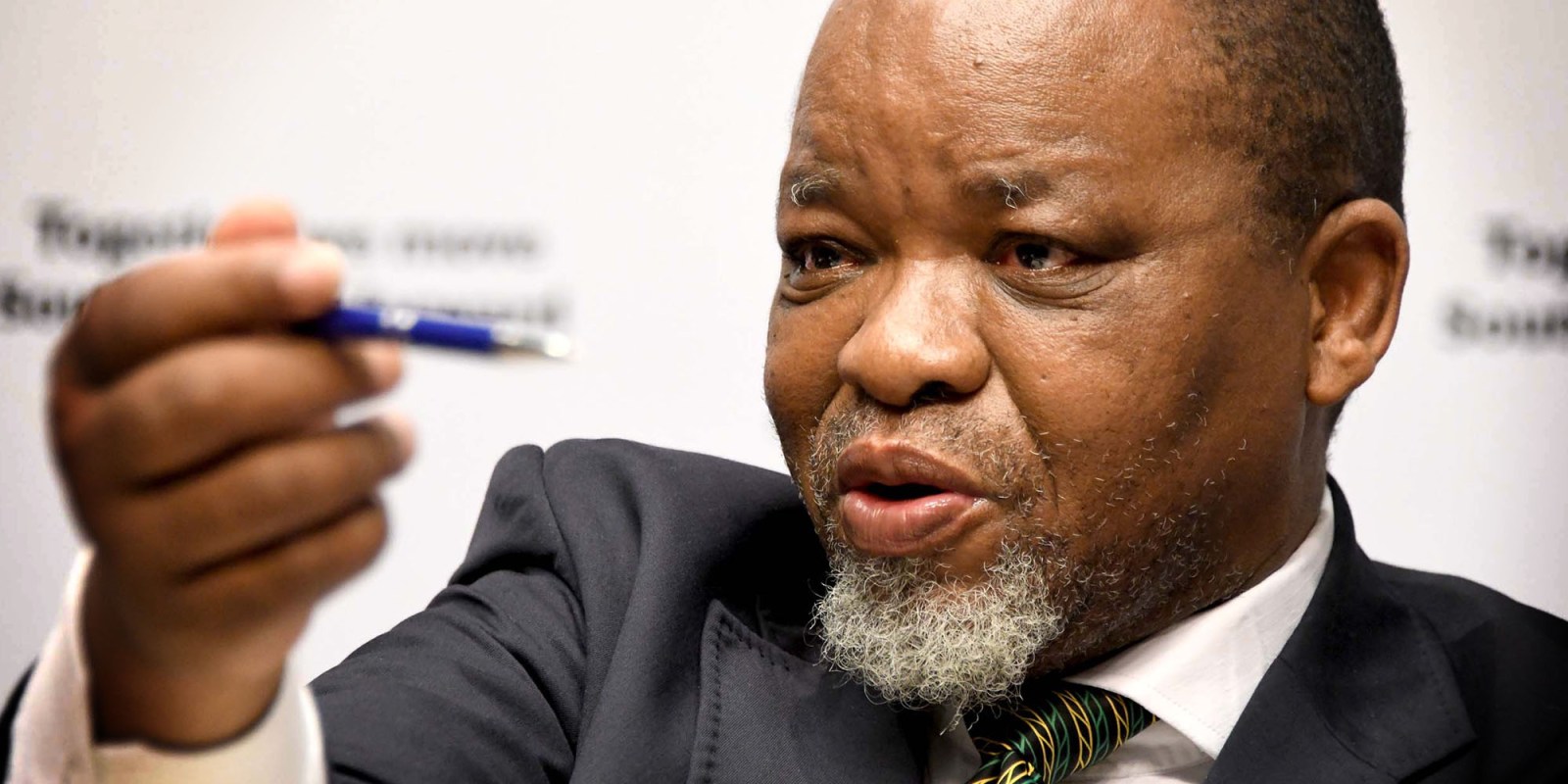 On Friday it emerged that the Mineral Resources and Energy Minister and ANC Chair, Gwede Mantashe, and his wife, Nolwandle Mantashe, had been implicated by a losing bidder in the project to provide “emergency” power generation. The consequences of this could be immense, both for South Africa’s continuous energy failure and the ANC’s future balance of power.

The publication of the claims in legal papers by amaBhungane in Daily Maverick suggests that the decision to provide Karpowership SA (which uses ships that produce power using liquefied natural gas) with the contracts to generate electricity as an independent power producer was corrupt. The claims point to a “close associate” of the minister.

While there is already a complicated nexus of interests in the power production space, there is now a risk that this court action against the Department of Mineral Resources and Energy could seriously delay the provision of the generation capacity that Eskom (and South Africa) sorely need.

As has happened so many times before, because of the suspicion of corruption and criminal business interests, the entire country will suffer. This time, there could also be massive implications for the balance of power in the ANC.

It is important to note at the outset that Mantashe, his wife, and the company which benefited from the decision, Karpowership SA, all deny wrongdoing. They say they were not connected to any bid to influence the final decision or to have any money or benefits change hands.

There is a very complicated context to South Africa’s electricity situation.

It is not just that the ANC has failed to solve the power crisis which saw load shedding starting in late 2007, despite the first warning that the lights would go out being sounded as early as 1998.

It is that at almost every step in the process there has been corruption.

The ANC’s investment vehicle, Chancellor House, benefited from contracts with Hitachi, which had R38.5-billion in contracts with Eskom to provide boilers for the Medupi and Kusile power stations, and which ultimately paid a $19-million fine to US regulators for breaching the US Foreign Corrupt Practices Act. The boilers were not properly designed — costing South Africa an untold amount of money — and are unlikely to ever reach peak performance.

Now, during what is supposed to be an “energy transition” which will see us moving away from relying on power produced mainly from coal to using power produced from renewable energy (South Africa having what is described as “high-quality solar” resources), there has been a huge series of fights around the process.

There are many interest groups: coal companies, coal transporters (who use trucks to transport coal to power stations, rather than much more efficient, less costly and more environmentally friendly trains), mining unions, people who want to produce power from wind, those who want to use the sun, a still-strong nuclear lobby and side-player companies like Karpowership SA.

The political nature of these interests cannot be ignored.

The situation was described by Professor Anthony Butler in Business Day in this way:

“The Eskom coal supply chain, and the associated trucking industry, offers a roll-call of influential ANC donors. Many of these entrepreneurs are at the centre of the historic process of building a significant black business class in SA.”

So it is no surprise that when a 20-year “emergency” power contract is up for grabs this sort of legal action ensues.

The essence of the claim made by DNG Power Holdings’ CEO, Dzunisani Aldworth Mbalati, in his court papers is this:

“Throughout the bidding process certain of the Fifth to the Tenth Respondents were (wrongfully and unlawfully) granted various exemptions in respect of material requirements of the RFP [request for proposal], which exemptions came at the expense of the common good of the South African population.

The timeline here is important. The ANC is scheduled to hold its national conference next year. If Mantashe wants to stay in the party’s top six national leadership it may be difficult to claim that he is leading an agenda of renewal with this kind of issue hanging over him.

The detail is hugely important and includes the claim that Mbalati was invited to a restaurant, where he and the group he was meeting were the only people there, and that the following was said to him:

“The one thing you must understand is that there is a system in this country and if you don’t work in accordance with that system you will fail, even if your project is the best, and I suspect that your project will be the best but that means you must be part of the system.”

In his papers, Mbalati says he is not naming the “close associate” of the minister because he is laying a criminal complaint against this person, and he has been advised not to name them at this stage.

But it is very likely that the name will emerge, because there will be too much interest and too much pressure to keep it secret for much longer.

The claims by Mbalati will confirm the suspicions of the environmental groups who were alarmed about the decision to appoint Karpowership SA in the first place.

It has still not been explained by the department why this “emergency” contract would be signed for a period of 20 years. This would mean that even if all of South Africa’s electricity problems were solved in the next decade (which may seem like science fiction now, but the price of solar energy and innovations in the storage of energy are moving very quickly), we would be locked into these contracts for a decade after that.

Mbalati’s bid, like that of Karpowership SA, produces power using liquefied natural gas. But instead of using ships to do this, he would use land-based power stations.

While this will not mollify the environmentalists (and comes with problems of its own, though not the destruction of the marine environment) it would benefit the country more than the Karpowership SA contract because it would employ South Africans. One of the main criticisms expressed in Mbalati’s legal application is that several exemptions were granted in terms of the need to use South Africans in the production of power. This would have been to the benefit only of Karpowership SA and not to any other company.

All of this leads to questions about Mantashe.

During his time as secretary-general of the ANC, Mantashe was sometimes seen as the “centre of gravity” in the party — the person who held it together.

Since then, however, (and since becoming minister) he has admitted to lying to a journalist in a bid to try to get them not to publish a story about him and a younger woman.

He has also been accused of not acting to resolve South Africa’s power crisis, of inaction when the last thing that a locked-down country in a pandemic crisis needs is another spate of blackouts (aka load shedding).

While South Africa needs action to resolve this long-running crisis, it is a complex situation with many pitfalls. The politicised interests in this space make any decision-making difficult. Any decision can be challenged in court (and possibly using political means as well), which makes swift action sometimes impossible.

It is important to consider the short-term implications of this case.

When will the names of the people at Mbalati’s restaurant meeting emerge, and will any of them be tied directly to Mantashe? If they are tied to him, will they explain themselves, or could he prove he had no connection with their conduct? Will it emerge that his wife, Nolwandle Mantashe, is tied directly to that meeting?

Within the ANC there are other serious considerations.

Mantashe has been a strong supporter of President Cyril Ramaphosa and his agenda of renewal. He has publicly backed the resolution that those implicated in corruption must “step aside”. His support is vital to Ramaphosa in the apparent battle with ANC Secretary-General Ace Magashule.

For Mantashe now to be tarnished by this kind of claim could damage this agenda.

It will allow Magashule’s allies to say that if Mantashe is corrupt, he too must resign.

The timeline here is important. The ANC is scheduled to hold its national conference next year. If Mantashe wants to stay in the party’s top six national leadership it may be difficult to claim that he is leading an agenda of renewal with this kind of issue hanging over him.

And this court case could have huge implications for South Africa as a whole.

While Mbalati argues in his court papers for an urgent hearing, there is no certainty that he will receive one. This means that his application could take many months, even a year. If successful, the decision to give the contract to Karpowership SA would be declared null and void, causing another significant delay in the provision of power to a country in a crisis that has dragged on from 2007, with consequences for our economy and every single person who lives here.

This issue is likely to become yet another symbol of how money, politics and power continue to trump national interest and suffocate South Africans’ hope of a better life. DM