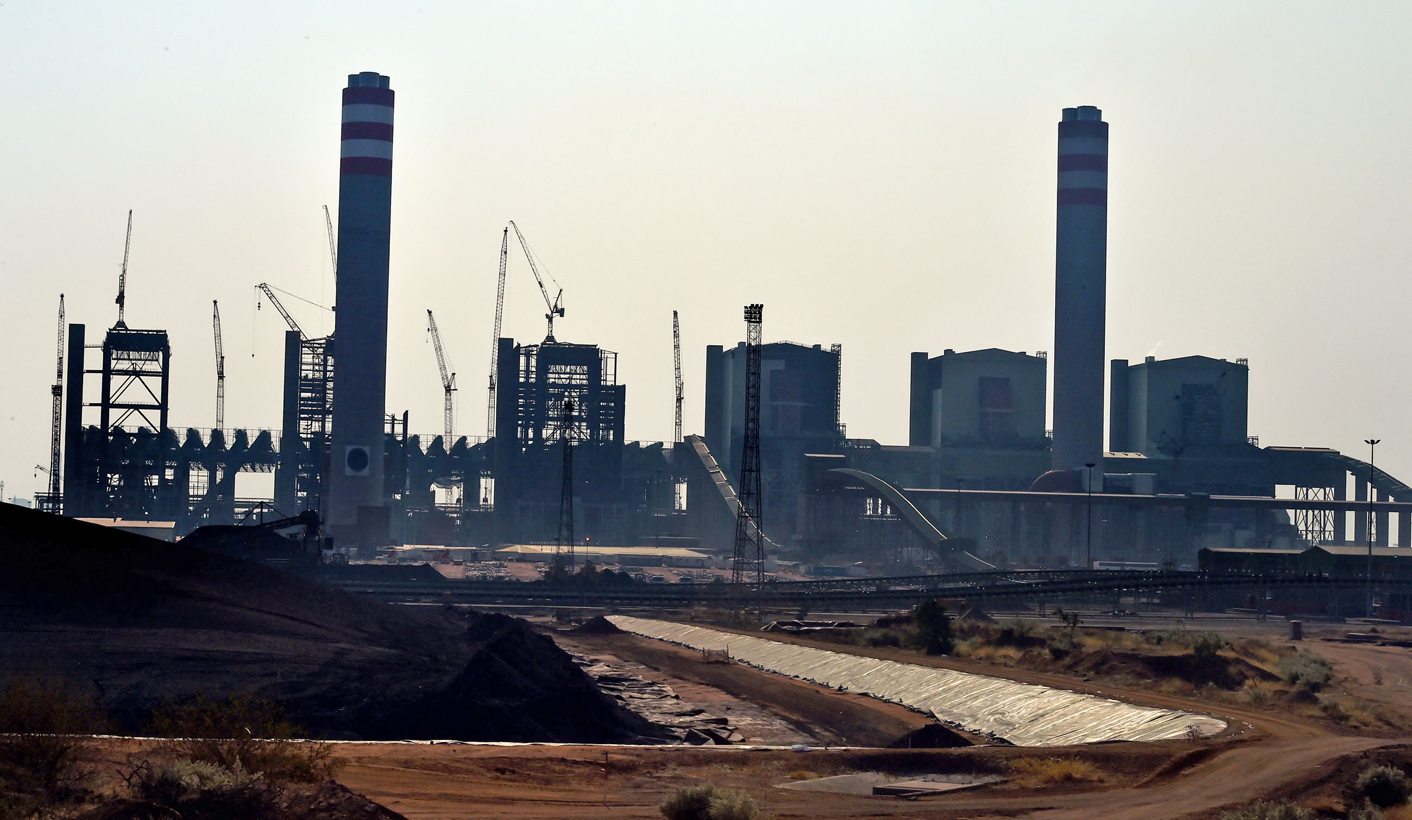 Chancellor House is well and truly in the spotlight again after an investigation by the US Securities and Exchange Commission, which claimed Hitachi had breached the US Foreign Corrupt Practices Act in its business deals with the ANC's front company. In the end, Hitachi paid $19-million to make the problem go away. By JUDITH FEBRUARY.

Hitachi has agreed to pay $19-million to settle the US Securities and Exchange Commission charges that it violated American anti-bribery law through improper payments tied to the supply of boilers to Medupi and Kusile. Hitachi agreed to the settlement without admitting to or denying the SEC’s allegations. The SEC claimed Hitachi had violated the Foreign Corrupt Practices Act by inaccurately recording improper payments made to Chancellor House Holdings.

The SEC said in a statement on its website on Monday: “Hitachi allegedly sold a 25% stake in its South African unit to Chancellor House Holdings (Pty) Ltd, allowing the company and the party to share profits. Hitachi paid Chancellor House, which it knew was a front for the ruling African National Congress, $5-million from the contracts and another $1-million in ‘success fees’.”

The SEC also alleged that in 2008 Hitachi paid an additional $1-million in ‘success fees’ to Chancellor House, which was improperly booked as consulting fees.

Hitachi has settled the matter and there is therefore no admission of guilt. The $19-million settlement however does raise more questions than answers regarding alleged payments made to the ANC as a result of the deal. Why would Hitachi pay a settlement figure? What was that in lieu of?

The ANC has yet to comment on the issue and Eskom has said it is unaware of the SEC and Hitachi settlement.

Kgalema Motlanthe was the first to admit that Chancellor House was a ‘front company’ for the ANC and a vehicle through which it funneled investments.

Of course there have always been concerns about Chancellor House and whether it should be bidding for state contracts at all.

We know Chancellor House has benefited, through its stake in Hitachi Africa, from the contracts to supply boilers to the new Medupi and Kusile power stations. Although Barbara Hogan, the then minister of public enterprises, called for a quick exit in a speech to the National Assembly as far back as 2010, there has never been any real unanimity within the party on how to deal with the thorny issue of Chancellor House.

Many outside the ANC have long argued that the ruling party should not be allowed to tender for state contracts even if, as it argues, this is at arm’s length via Chancellor House. That seems to be a very thin veil to pierce and the conflicts of interest as well as the unhealthy blurring of party and state are surely obvious and to be avoided?

In 2012, speaking at an Institute for Democracy in Africa (Idasa) debate in Cape Town, Gwede Mantashe said Chancellor House was “everywhere and anywhere” and that there was nothing “illegal” in it tendering for state contracts. Mantashe seemed then to diminish concerns regarding conflicts of interest or the perception thereof. But there can be no level playing field if Chancellor House was submitting tenders given that the judge and jury are in reality the same people. At that debate, the United Democratic Movement’s Bantu Holomisa, long a champion of transparency in political donations called Chancellor House an “unethical” arrangement, adding: “You cannot use a state resource as a cash cow and milk it every day.”

Mantashe’s response was that Chancellor House is an example of a transparent source of funding. He further defended the existence of Chancellor House by saying it was created to close the gap created when donor funding – which had supported the ANC during the struggle – retreated after democracy had been obtained. “That we should not take initiative is saying we should starve ourselves to death and collapse.”

Last year, speaking at another forum in Cape Town also chaired by this writer, ANC treasurer-general Zweli Mkhize argued that Chancellor House should not hold direct government contracts and should avoid all conflicts of interest in future. While Chancellor House had by then divested its stake in Hitachi Power Africa, which held a R38.5-billion contract with state-owned enterprise Eskom, the investment company still holds stakes in several companies that have government contracts or operate in government-regulated industries such as mining. Mkhize is the third high-ranking ANC official over three terms of office who has promised to restrict the activities of the party’s investment vehicle, to bring it in line with basic ethical principles. However, earlier statements of intent by previous ANC secretary-general Motlanthe and previous treasurer-general Mathews Phosa came to nothing.

The Hitachi affair should raise uncomfortable questions for the ANC around political donations and sources of funding.

South Africa’s democracy is suffering from the absence of transparency and a complete lack of regulation of private funding, despite being a signatory to the African Union convention on corruption, which includes a provision requiring national regulation based on the principle of transparency.

Given the ruling party’s intransigence, it seems time to contextualise the problem yet again and try to map solutions.

There seem to be three main dimensions to the challenge.

First, the demand side: political parties need money to operate.

Strong democracies require healthy political parties. In turn, political parties require resources to sustain and operate a basic party structure, to contest elections and to contribute to policy debate. Therefore it is probably unrealistic to suggest an outright ban on private donations.

But limits on expenditure may be desirable. Many donors are tired of seeing their donations spent on the poster ‘arms race’ that precedes every election. They would rather see their money being spent on creating real capacity in political parties. In the Netherlands, for instance, half the public funding must go towards policy institutes attached to each party.

Second, there is the supply side. Corporate donors in particular are increasingly vexed by the choice they face. Some have fled the scene, concerned that the funding environment is a minefield in which their reputations can only be harmed.

Others have taken the opposite view, pumping secret donations into the ruling party to oil the business wheels. In between, a small minority of companies has taken the open road, declaring their donations, but invariably making them on the basis of the current proportional representation within the National Assembly — which only really serves to cement the status quo.

The third dimension is the public one: there is already substantial public funding of political parties — about R100-million in the current financial year. There have been hesitant calls for an increase in this figure from across the political spectrum. Some believe it will result in less dependence on either corporate or dodgy donors. Minority parties hope it will increase the overall envelope and therefore heighten their ability to compete.

At the ANC’s Polokwane conference in 2007, the party resolved to “champion the introduction of a comprehensive system of public funding of representative political parties — as part of strengthening the tenets of our new democracy. This should include putting in place an effective regulatory architecture for private funding of political parties — The incoming NEC (national executive council) must urgently develop guidelines and policy on public and private funding, including how to regulate investment vehicles.”

Yet, since then and the Idasa court case of 2005, there has been no progress. Mkhize himself has argued for a Democracy Fund into which donors could donate money that would be distributed according to an agreed formula. There is scant further detail and as South Africa lurches towards a local government election, one can only imagine that there will be limited appetite for any form of transparency regarding political donations.

(My Vote Counts has brought its own Constitutional challenge in order for legislation to be passed regulating private donations to political parties. That matter was argued in February and the outcome is awaited.)

Whether Hitachi was silent or not regarding its guilt or otherwise in breaching the Foreign Corrupt Practices Act, one thing is clear: it is surely better for the ANC not to have any suspicion cast on it and instead cease to bid for any state contracts via Chancellor House. The potential for conflicts of interest and the ANC’s obvious ability to influence government decisions from Luthuli House, make it all clearly untenable.

One wonders what Mantashe and Mkhize might say to the latest developments in the US. Given the ruling party’s intransigence on the issue over so many years, let’s not hold our breath for the mea culpa. DM

Judith February is campaign coordinator for My Vote Counts.