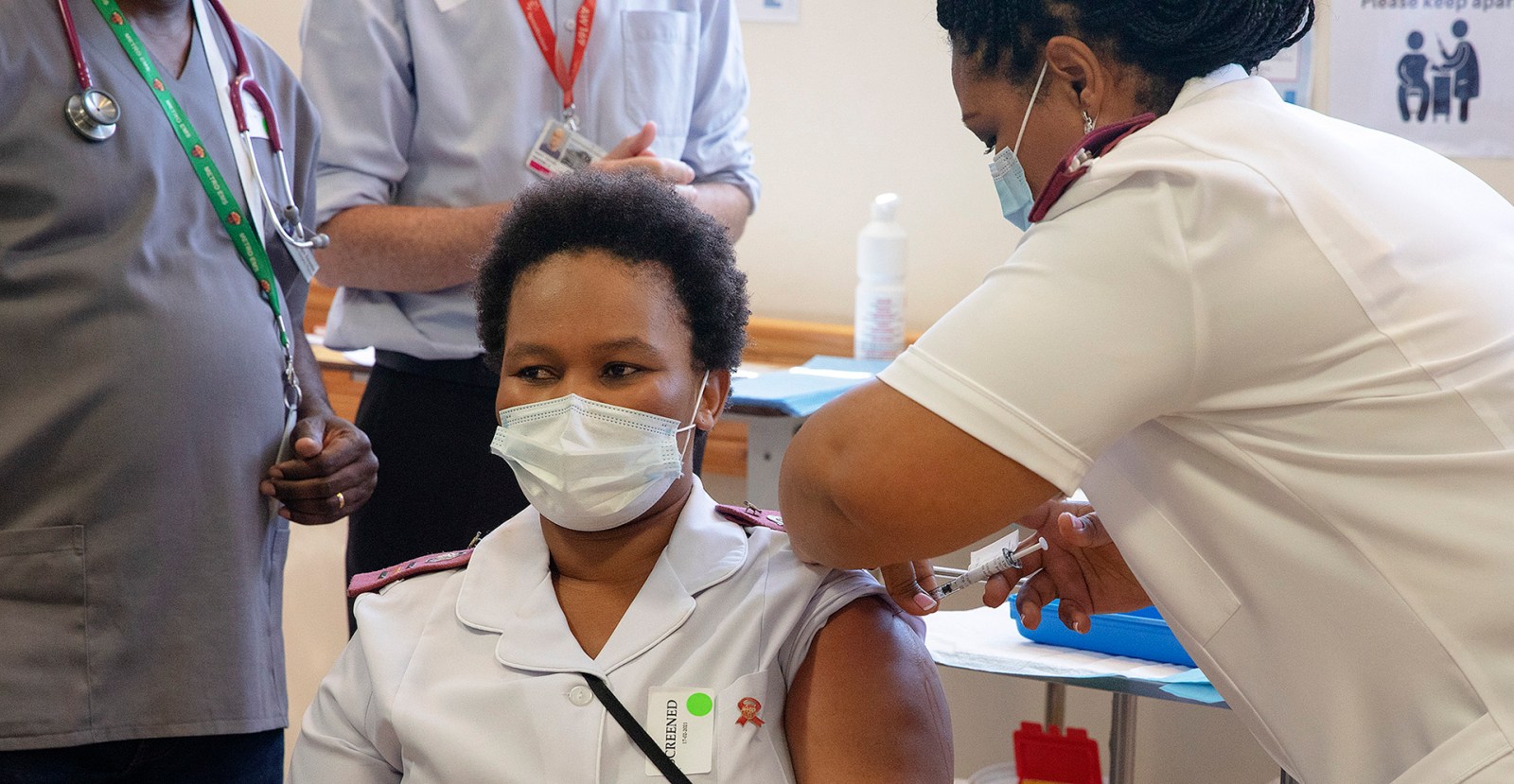 The Department of Health has heeded the advice of the South African Health Regulatory Authority to resume the use of Johnson & Johnson’s Covid-19 vaccine and restart the Sisonke study. (Photo: EPA-EFE/GIANLUIGI GUERCIA)

The Department of Health has given the green light for the resumption of the use of the Johnson & Johnson Covid-19 vaccine. This comes after South African, American and European health authorities recommended that the roll-out be resumed and emphasised that the benefits of protection against severe Covid-19 ‘far outweigh’ the risk of rare side effects. The Sisonke study will restart vaccinating healthcare workers with this vaccine in two days’ time.

The Department of Health has heeded the advice of the South African Health Products Regulatory Authority (Sahpra) to resume the use of Johnson & Johnson’s Covid-19 vaccine and restart the Sisonke study. This decision was announced on the morning of 26 April, giving the department just 48 hours to restart the vaccination programme on 28 April.

The department assured that teams “have been eagerly standing by” to complete the programme as quickly as possible. It confirmed that it has all the doses of the Johnson & Johnson Covid-19 vaccine to vaccinate over 200,000 healthcare workers.

To assist in the resumption, the number of vaccination sites has been increased from 47 to 95 sites around the country. The list of sites is yet to be updated.

The Sisonke study says it has taken all the necessary precautions and preparations to restart vaccination “so that we can deliver the 200,000 doses of Johnson & Johnson we have at hand to ensure we protect half a million health workers before the third wave”.

Sahpra has briefed vaccination site staff and all participant information is already updated.

Health Minister Zweli Mkhize noted that Sahpra has recommended that pregnant and lactating women should not receive the Johnson & Johnson vaccine “at this stage”. The South African Medical Research Council (SAMRC) will discuss this further with Sahpra,  he said.

It reassured breastfeeding health workers who have already been vaccinated that they should not be concerned. “Covid-19 vaccines are not able to replicate in the human body, disintegrate within two to three days of vaccination, and do not pass into breastmilk. Breastfeeding women have been included in all trials of the Johnson & Johnson vaccine thus far, with no safety concerns reported in mothers or their infants,” it said.

Mkhize said it has been established that there is a one in a million chance of getting the clot after the vaccine. He added that it appears that women between the ages of 18 and 48 are more at risk, as there have been seven cases per million doses among women in this age group.

“With such a low probability of developing a clot, all the regulators across the world have recommended the continued use of Johnson & Johnson,” he concluded.

There will now be “intensified” pre-vaccination assessment and post-vaccination monitoring in South Africa. These new processes have been jointly developed by the SAMRC, the department of health, Sahpra and a number of ethics committees.

Those who have already been vaccinated in the Sisonke programme will receive an SMS directing them to a letter that explains the updated safety information of the vaccine.

Those who have registered but have yet to be vaccinated through the Sisonke study will have to give consent to participate in the programme again. They will receive an SMS requesting them to consent again to an updated version of the consent form. They will receive an information package on the safety and efficacy of this vaccine and will receive a new vaccine voucher.

Mkhize urged those who are vaccinated to seek medical attention should they experience headaches, abdominal pain, vomiting or blurry vision, as these could be signs of the rare blood clot. Participants can report any side effects to the Sisonke Safety Desk on 0800 014 956, or the Covid-19 public hotline on 0800 029 999 or on the newly launched Med Safety app.

The Sisonke study says it has already started to educate vaccinator staff and healthcare workers, revised its screening protocols, strengthened safety monitoring and stationed experts to assist site researchers and clinicians, should someone develop the condition.

Sisonke will check in with participants at least twice after vaccination and ask about side effects. “Should a clinician be concerned about a suspected case of VITT (vaccine-induced immune thrombotic thrombocytopenia), we will assign a safety doctor and haematology expert to help guide treatment,” it assured in a statement.

Together with the Desmond Tutu Health Foundation, it will host a webinar on 4 May at 12pm to address any concerns from the public and the media. Register here.

The Covid-19 Vaccine Injury No-Fault Compensation Scheme has been gazetted and a step-by-step guide will be published soon. The scheme is meant to provide citizens with a way to get compensation if they suffer severe or serious side effects following vaccination with any Covid-19 vaccine.

Phase Two will begin as planned on 17 May, said Mkhize. The first 1.1 million doses of the Johnson & Johnson vaccine are ready to be distributed from Gqeberha “in the coming days”. The country will receive over 650,000 doses of the Pfizer Covid-19 vaccine before 17 May with another 325,560 arriving later that week. The health minister added that 2,369 of the 3,338 vaccination sites have been registered and approved.

The use of the Johnson & Johnson vaccine was temporarily suspended in South Africa on 13 April. Mkhize explained at the time that this was to allow regulators the chance to investigate the possible link between the vaccine and a rare type of blood clot in the brain. South Africa had vaccinated over 292,000 healt care workers and there have been no reports of clots.

This rare clotting syndrome is an “extremely rare condition,” says the SAMRC. Affected people have unusual blood clots in large veins which drain blood from the brain. Those affected have also had low platelet counts – these are a part of your bloodstream which assist with clotting and the prevention of bleeding. The condition is treatable.

On 17 April, Sahpra said it had received the study’s safety data and recommended that the study be resumed as long as those participants at high risk of a blood clotting disorder were screened and monitored more intensely. On 22 April, Cabinet “welcomed” this recommendation.

In the meantime, the Southern African Society of Thrombosis and Haemostasis published guidelines for the diagnosis and management of vaccine-induced immune thrombotic thrombocytopenia on 20 April. It was authored by 20 specialists in the field and reviewed by independent international experts before it was published. They emphasised that while this complication is “extremely rare”, it can potentially be fatal.

The pause came after the US Food and Drug Administration suspended the use of the vaccine to allow for its own investigation into the possible causal link between the rare type of blood clot in the brain. This rare blood clot was reported in six women in the US at the time. They all had low levels of platelets. The authority said that these adverse events “appear to be extremely rare”.

On 23 April, the US lifted its suspension and will include information about the rare disorder in the product’s labelling. This came just days after its European counterparts recommended the same and said the benefit of the vaccine outweigh its risks. The US authority has confirmed 15 cases of the disorder out of nearly eight million people who have received the vaccine. DM/MC.