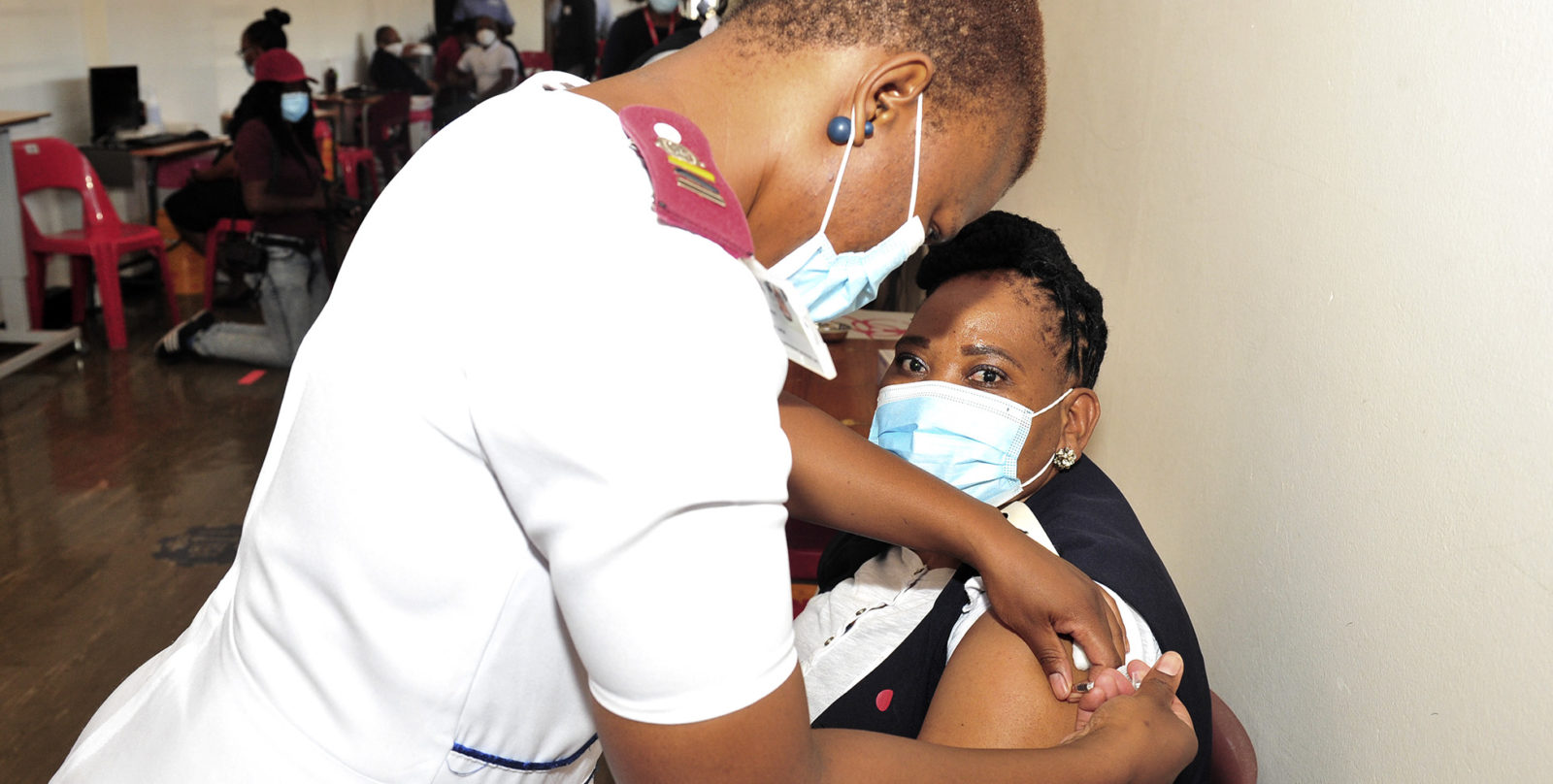 South Africa has suspended use of the Johnson & Johnson Covid-19 vaccine as a precaution after a rare type of blood clot was reported in a small number of people worldwide after receiving the injection. (Photo: Gallo Images / Lefty Shivambu)

Minister of Health Dr Zweli Mkhize has provisionally suspended the use of the Johnson & Johnson vaccine in South Africa while regulators investigate a possible link between the vaccine and a rare type of blood clot in the brain.

Minister of Health Dr Zweli Mkhize announced on Tuesday the suspension of the Johnson & Johnson vaccine as a precautionary measure, but said he was hopeful that it would only be for a few days.

This comes after the US Food and Drug Administration (FDA) suspended use of the vaccination pending a review of a possible causal link with a rare type of blood clot in the brain that was reported in six women in the US coupled with low levels of platelets.

Similar concerns in Europe led to the suspension of the AstraZeneca vaccine.

The vaccine has already been administered to about 290,000 health workers in South Africa as part of an early access programme called the Sisonke Protocol.

The cases found in the US, and earlier in the UK, were all in relatively young women. In the US cases, the women developed a blood clot in the dural venous sinuses in the brain in combination with low levels of platelets.

“We have noted the decision taken by the Food and Drug Administration in the United States of America to advise the temporary suspension of the Johnson and Johnson vaccine roll-out in the US,” Mkhize said.

“These incidents occurred between six and 13 days after vaccination in women between the ages of 18 and 48 years old. It must be noted that over 6.6 million citizens have been inoculated with the Johnson & Johnson vaccine in the United States.

“In South Africa, we have not had any reports of clots that have formed after vaccination, and this is after having inoculated 289,787 healthcare workers under the Sisonke Protocol.”

Mkhize said that after the FDA issued its advisory he held urgent consultations with “our scientists”. He said they had advised that the decision by the FDA should not be taken lightly.

“Based on their advice, we have determined to voluntarily suspend our roll-out until the causal relationship between the development of clots and the Johnson & Johnson vaccine is sufficiently interrogated,” Mkhize said.

He said the South African Health Products Regulatory Authority (Sahpra) will collate information from Johnson & Johnson, the FDA and other regulatory bodies to make a thorough assessment of the situation and provide further guidance.

Sahpra has approved the Johnson & Johnson vaccine for use in South Africa.

“I humbly call for calm and patience as we ensure that we continue to be properly guided by science in ensuring the safety of our people as we roll out the vaccine campaign. We hope that the deliberations will only take a few days.

“Given the preliminary literature on hand, our scientists are confident that the FDA’s decision is on a precautionary basis and we expect that this will not result in the complete withdrawal of the Johnson & Johnson vaccine from the vaccination armament,” Mkhize said.

“We also wish to assure citizens that these kinds of reports are expected to emerge as part of a robust post-market surveillance system. This should provide comfort that medical authorities keep a vigilant watch on all new products that are deployed into the market to ensure they remain safe and effective for human consumption. It is for this reason that we implemented the Sisonke Protocol and will also implement a similar post-market surveillance study for Pfizer when we roll out the first batch of doses to healthcare workers.”

He said South Africa had obtained another 10 million doses of the Pfizer vaccine.

“We expect just under two million to be delivered in May. This therefore means we have secured 30 million doses of the Pfizer vaccine for this financial year. This also reassures us that, in the extremely unlikely event that the Johnson & Johnson vaccine roll-out is completely halted, we will not have any impediment to proceed with Phase Two of the roll-out [using] Pfizer.

“We are confident that the roll-out of Johnson & Johnson will resume and so, with 30 million doses of Johnson & Johnson and 30 million doses of Pfizer secured we now have enough doses to exceed the 40 million we were targeting this year. This is in line with our commitment to vaccinate as many people as possible in this financial year – in the ideal scenario we would vaccinate every single adult found in South Africa.”

Mkhize said science had to be respected at all times, and this sometimes meant a “disruption in our plans”.

“Although we are operating in a dynamic and ever-changing environment, the government is constantly seeking to secure vaccines that will protect us from the 501Y.V2 variant.

“We therefore urge South Africans to be supportive of our experts and scientists as they work under enormous pressure to give us answers on this worrying development so that we may proceed safely with the global vaccination programme.”

Mkhize said Saphra was to meet on Tuesday night to discuss the latest developments and the Vaccine Ministerial Committee would meet on Wednesday.

He said they were also receiving advice from the World Health Organization and the Africa Centres for Disease Control and Prevention.

“We are guided by their views.”

He said he had had a quick consultation with advisory teams and had discussed the matter with the Medical Research Council and the ethics committee overseeing the Sisonke Protocol.

“The feeling has been because the announcement came from the FDA, we need to collate info. We think it is a precautionary measure. We are linking up with Johnson & Johnson to see what their advice will be. We think this will be cleared up in a matter of days.”

Mkhize said that at this stage he not was expecting the latest development to have a significant impact on the roll-out of the vaccine in Phase Two and added that another million doses of the Johnson & Johnson vaccine were still expected next week.

Mkhize said once the necessary information is collected to decide if the blood clotting problems were linked to the vaccine, it will be possible for them to balance benefits and disadvantages.

Sahpra board chairperson Helen Rees said safety was always at the top of the list of considerations.

“People are worried because vaccines were developed very fast. That is why we are being very cautious. The number of cases (is) very small. What we know about vaccines is that we have information on safety for tens of thousands [during the trial phase], but when you roll out to millions you must look for safety signals and ask, is it linked to the vaccines or is it just sheer chance?”

She said even if there was a link, it was necessary to discuss how to weigh up benefit and risk. “That is a discussion we need to have once we understand if there is a causal link with this rare side effect or not.”

The lead investigator for the Johnson & Johnson vaccine trial, Professor Glenda Gray, said these rare side effects had not been seen in any of the close to 290,000 health workers vaccinated in the Sisonke roll-out.

She said these rare “thrombotic events” were seen in trials for four vaccines – Pfizer, Moderna, AstraZeneca and Johnson & Johnson.

“We are trying to establish if they are the same or different and the incidence in the general population. Safety is important. We hope that we will be able to continue after the pause,” she said.

On Monday Dr Peter Marks, the director of the FDA’s Center for Biologics Evaluation and Research, and Dr Anne Schuchat, principal deputy director of the Centers for Disease Control (CDC), issued the following statement:

“As of April 12, more than 6.8 million doses of the Johnson & Johnson (Janssen) vaccine have been administered in the United States. [The] CDC and the FDA are reviewing data involving six reported US cases of a rare and severe type of blood clot in individuals after receiving the J&J vaccine. In these cases, a type of blood clot called cerebral venous sinus thrombosis (CVST) was seen in combination with low levels of blood platelets (thrombocytopenia).

“All six cases occurred among women between the ages of 18 and 48, and symptoms occurred six to 13 days after vaccination. Treatment of this specific type of blood clot is different from the treatment that might typically be administered. Usually, an anticoagulant drug called heparin is used to treat blood clots. In this setting, administration of heparin may be dangerous, and alternative treatments need to be given,” the statement read.

The CDC will convene a meeting of the Advisory Committee on Immunization Practices on Wednesday (14 April) to further review these cases and assess their potential significance. The FDA indicated that it would then review that analysis as it also investigated these cases.

“Until that process is complete, we are recommending a pause in the use of this vaccine out of an abundance of caution. This is important, in part, to ensure that the healthcare provider community is aware of the potential for these adverse events and can plan for proper recognition and management due to the unique treatment required with this type of blood clot,” the statement reads.

The FDA emphasised that these adverse events “appear to be extremely rare”.

“People who have received the J&J vaccine who develop severe headache, abdominal pain, leg pain, or shortness of breath within three weeks after vaccination should contact their healthcare provider,” their statement continued. DM/MC