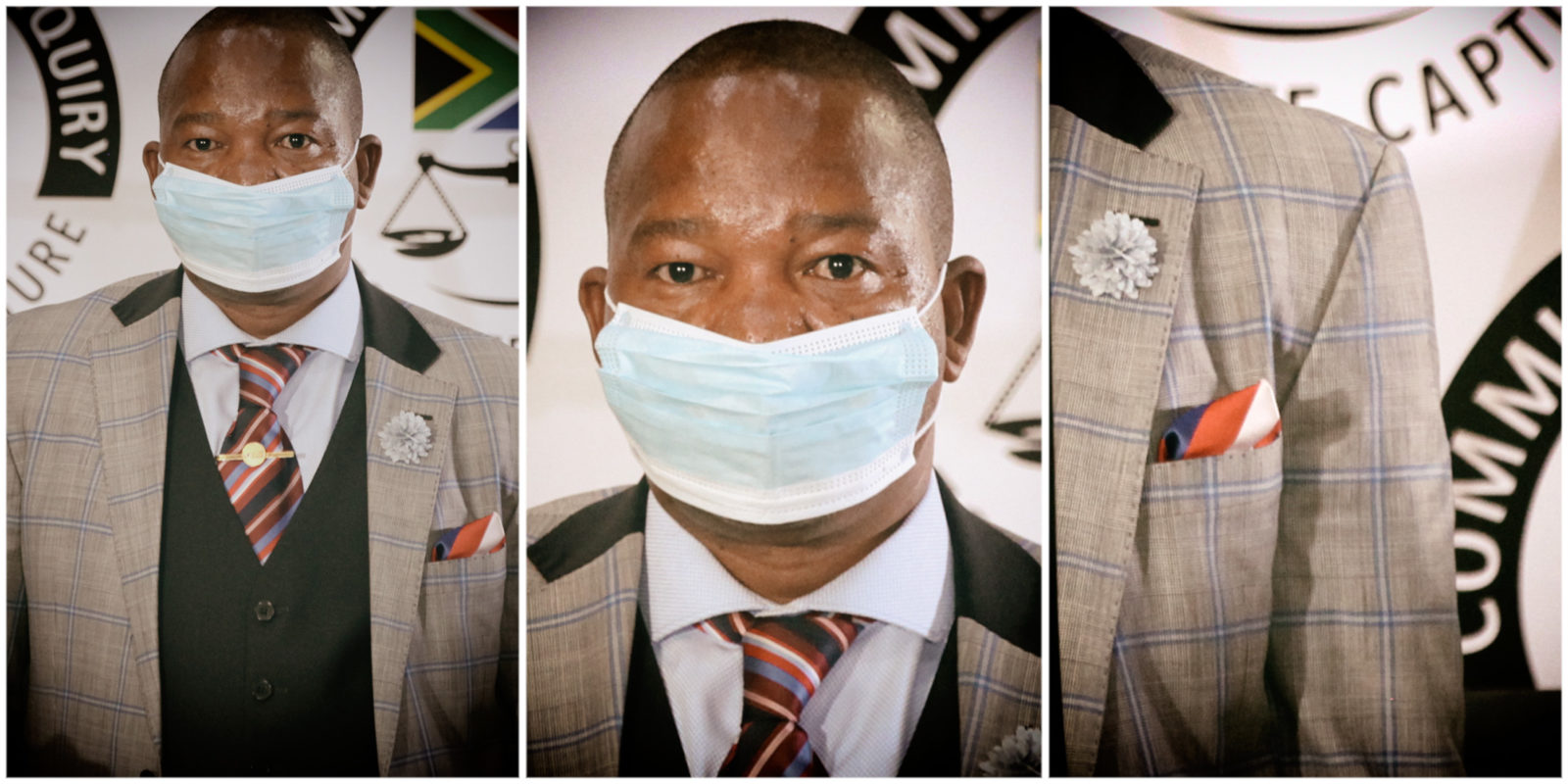 After his selection in 2016 as the preferred candidate for the long-vacant and crucial civilian oversight position of the Inspector General of Intelligence, Dr Setlhomamaru Dintwe described himself as a “hunter who hunted others”.

To do this, he told Parliament’s intelligence committee back then, “you have to become a snake that eats other snakes”.

And here we are five years later at the Zondo Commission of Inquiry into State Capture where Dintwe was finally able to clinically set out the vicious and determined nature of the den of vipers he had been appointed to oversee during the peak State Capture years of the Zuma era.

He has also, with the vast powers of oversight bestowed upon his independent office, an inside view of the State Security Agency and attempts at sidelining perceived obstacles to State Capture.

These included Pravin Gordhan and Mcebisi Jonas, former minister of Finance and his deputy, Robert McBride, executive director of the Independent Police Investigative Directorate (Ipid), Mxolisi Nxasana, National Director of Public Prosecutions, and Dintwe himself, to name but a few.

Many senior officials also, including SARS top leadership like Ivan Pillay and Johann van Loggerenberg, had their careers in the public service manipulatively cut short when they flew too close to the flame.

The deleterious effect is that the names of these people are irreparably besmirched. By the time cases are withdrawn it is too late, their careers are destroyed.

“There seems to be no recourse for the citizens whose integrity and careers are destroyed,” said Dintwe, addressing the use of bogus reports, charges and investigations by those compromised to target “persons who stand in the way of State Capture”.

“The deleterious effect is that the names of these people are irreparably besmirched. By the time cases are withdrawn it is too late, their careers are destroyed,” Dintwe put it on record.

Snakes and vipers. It might all sound dramatic but Dintwe, who testified on 20 April, is not a man for drama.

Perhaps sartorially – he attended both days in characterful suits with peeking pocket kerchiefs and matching ties secured with a pin – but not professionally.

Pedantic with a vast and easily engaged knowledge of his field of independent oversight, Dintwe recounted the onslaught on him and his office in forensic and shocking detail.

Dintwe, after all, holds a doctorate in police science with specialisation in forensic investigations. Little wonder that three ministers had attempted to thwart Dintwe’s testimony to the Zondo Commission last week.

Deputy Chief Justice Raymond Zondo heard from the IG how Police Minister Bheki Cele, Defence and Military Veterans Minister Nosiviwe Noluthando Mapisa-Nqakula, and State Security Minister Ayanda Dlodlo had all tried to stop him from testifying and had written to President Cyril Ramaphosa that Dintwe should be suspended.

The complaint is now with Parliament’s Joint Standing Committee for Intelligence, which Dintwe told Zondo he hoped would look upon him “favourably”.

Dintwe stood his ground at the Zondo Commission, as he has done on several other occasions, including when then powerful DG of the SSA, Arthur Fraser, and then Minister of State Security, Bongani Bongo, tried illegally to remove him from office by circumventing and ignoring primary legislation.

This Dintwe set this out in detail during his testimony.

He spoke of Bongo’s alteration of a Ministerial Delegation of Powers and Fraser’s attempt to “revert” Dintwe’s security clearance. “These amendments were directed at undermining my authority,” said Dintwe.

At the time Dintwe was investigating Fraser and the Principal Agent Network (PAN) he was running. The IG told Zondo how Fraser had, during a meeting in Cape Town, slammed a letter down violently on an office table informing the IG “that the caucus of the ANC in Parliament had told him he should tell me to withdraw or to stop the investigation”.

“I disagreed with Fraser on the basis ‘you are not my messenger you are not my supervisor. I report to Parliament. If Parliament wants me to stop they should do so themselves,” Dintwe told Zondo matter-of-factly.

Only the president has the power to appoint an Inspector-General – after a recommendation by the Joint Standing Committee on Intelligence, approved by the National Assembly. And only the president can remove the IG.

Fraser and Bongo’s attempted amendments were brazen and flagrantly unconstitutional, aimed at consolidating power over the unaccountable SSA which the High Level Panel into the State Security Agency review found had operated as a parallel intelligence structure at the service of former president Jacob Zuma.

Dintwe withstood Fraser’s onslaught, including the cutting off resources to the Office of Inspector General which is funded by the SSA.

During a meeting with the then president, Dintwe said he had found him ‘welcoming’. Zuma had explained, said Dintwe, that ‘when the time is right then he will write to me and when the time is right he would explain it all so that I would understand’. Of course, ‘despite numerous requests, including one at a meeting and despite his promise nothing was forthcoming’.

Fraser, said Dintwe, had also spied on and threatened him.

“How do you follow the head of a constitutional body, surveil them, intercept them? It may be treasonous, it is just sheer criminal,” the IG told Zondo.

In 2019 the Inspector-General also refused to budge after veiled threats by Public Protector Busisiswe Mkhwebane to invoke “higher powers” during a fishing expedition to Dintwe’s office in search of the notorious and now discredited Radebe Report into the “rogue unit” at SARS.

In that instance, Dintwe reminded Mkhwebane that both their offices operated independently. This was not testimony given to Zondo however.

While Dintwe has featured in headlines mostly in relation to repeated attempts to remove him from office, the South African public have seldom had the opportunity to see him in an environment in which he clearly thrives.

His appearance at the Zondo Commission put Dintwe in the spotlight, revealing a man of considerable backbone, expertise and independence-of-mind.

Dintwe set out how Fraser and others had targeted people who were viewed as obstacles to corruption and fraud including McBride and Nxasana.

In both cases the “reverting” or the withdrawal of top-secret security clearance was used to illegally oust or sideline both McBride and Nxasana.

In Nxasana’s case, Dintwe directly implicated the involvement of Zuma’s “personal spy”, Deputy DG Domestic branch of the SSA, Thulani Dlomo. Dlomo, said Dintwe, had been tasked with digging dirt on Nxasana after it became known that the new NDPP would go ahead with Zuma’s corruption trial.

Nxasana had already received top-level clearance but Zuma later relied on the NDPP’s alleged lack of “proper” clearance to lodge an investigation into his fitness to hold office.

When McBride applied for a second term in office, his security clearance was “reverted” and this was used as an excuse by ANC members of the police committee to send him packing. McBride spent years uncovering industrial-scale corruption in the SAPS.

Dintwe said that a parallel structure had been set up in the SSA to provide security vetting and that this had been abused.

With regard to the 2017 “Checkmate” intelligence report which then-president Jacob Zuma had used to justify firing Gordhan and Jonas, claiming his two ministers had “met with foreign agents who were calling for regime change in South Africa”, Dintwe said he doubted this existed.

Zuma had, in a meeting with the ANC’s top six at Luthuli House, said Dintw, claimed that he was “in possession” of an intelligence report. Zuma had not disclosed the source of the intelligence and was apparently the only person on Earth who had a copy of the alleged report.

Dintwe was tasked to investigate the origin and authenticity of the “Checkmate” report but could never extract a copy out of Zuma.

During a meeting with the then president, Dintwe said he had found him “welcoming”. Zuma had explained, said Dintwe, that “when the time is right then he will write to me and when the time is right he would explain it all so that I would understand”. Of course, “despite numerous requests, including one at a meeting and despite his promise nothing was forthcoming”.

Dintwe said that he hoped his testimony could shed light on how parallel structures operated to undermine the rule of law.

The importance of an independent-minded IG who serves the public interest was highlighted by Dintwe’s testimony and experiences as the oversight body for all intelligence services which have all been deeply implicated in malfeasance, fraud and corruption.

The attacks on the office have been relentless.

The late former IG, Faith Radebe, an advocate, had been a former spy for the National Intelligence Agency (NIA) and the State Security Agency and lacked independence.

Under her watch between 2010 and 2015 she backtracked on charging corrupt CI head Richard Mdluli after receiving a call from Zuma. Her “report” into the allegations that the State Security Agency had been captured soon morphed into what would later become known as the Radebe “SARS rogue unit” report. It has since been discredited by the courts.

The position of IG remained unoccupied for a dangerous 18 months while parallel SSA structures, allegedly directed by Fraser, operated with no oversight whatsoever leading the “lost years”.

Dintwe, as the preferred candidate, was voted into office by most political parties in the National Assembly, apart from the EFF.

His ability to withstand pressure and all manner of illegal ploys from the highest echelons of the political pyramid as well as the foot-soldiers on the ground, have earned him a special place in the history that will be one day told of the cost of standing your ground, saying “no” and living to tell the tale.

Dintwe, who enjoys 24-hour protection, will return to give further testimony at the Zondo Commission at a later date. DM