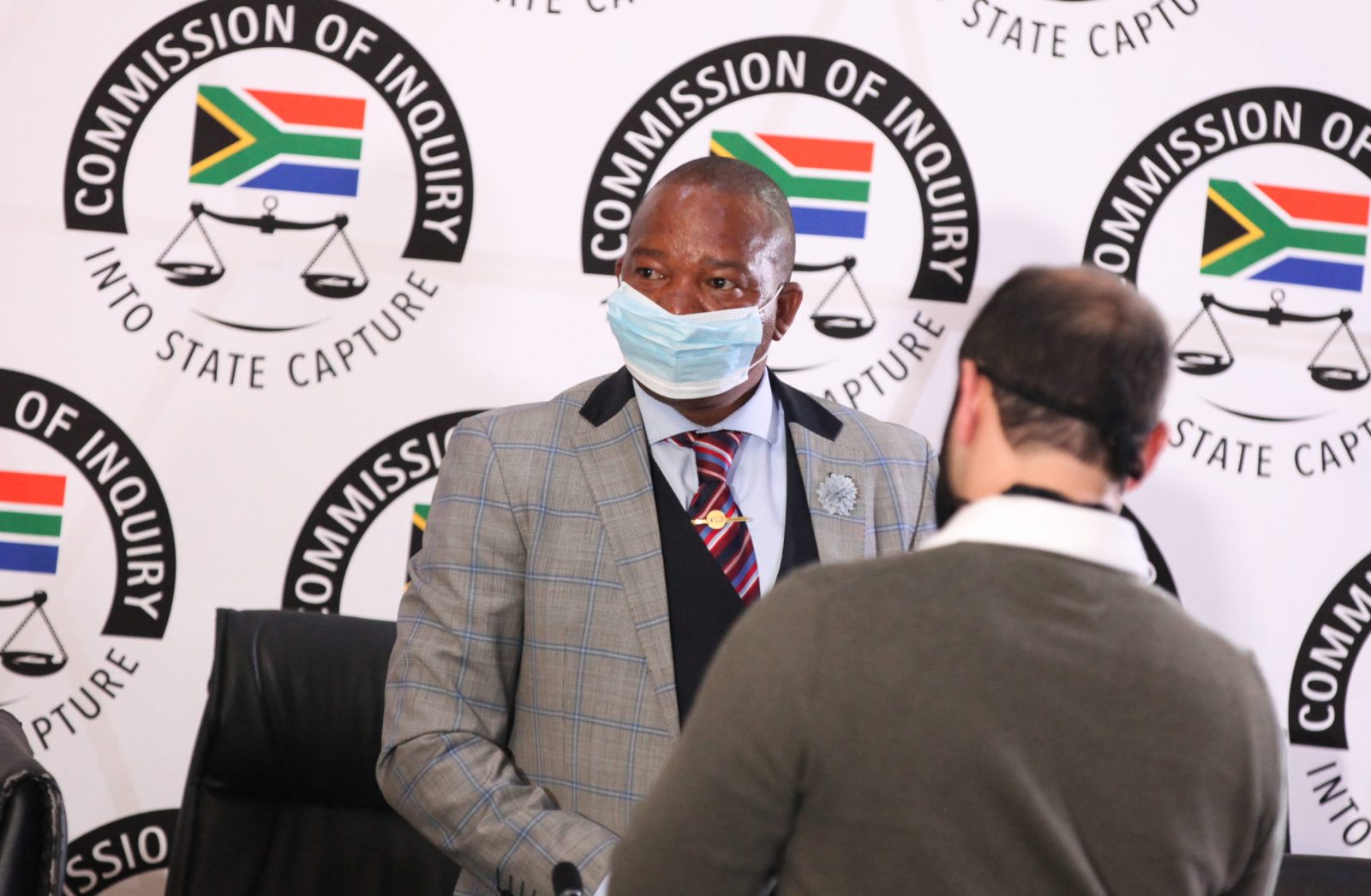 The Zondo Commission heard succinct and at times startling testimony on Tuesday night revealing how the State Security Agency – which it has emerged was at the heart of State Capture – ensured the Office of the Inspector-General of Intelligence was not able to fulfil its function of exercising intelligence oversight.

In the clandestine business of national intelligence, the South African Constitution ensures there is civilian oversight in the form of an office to hold the country’s spooks to account. The office is that of the Inspector-General of Intelligence, who for the past four years has been Dr Setlhomamaru Isaac Dintwe.

It was Dintwe who appeared before the Commission of Inquiry into State Capture chairperson, Deputy Chief Justice Raymond Zondo, during Tuesday’s evening sitting.

Dressed in a three-piece checked suit replete with tie pin and pocket square, Dintwe appeared eager to air his experience after four frustrating years at the helm.

Although the Office of the Inspector-General of Intelligence exercises oversight of the State Security Agency (SSA), as well as the intelligence services of the police and defence force, its budget came from the SSA.

Additionally, there was no prior determination before money was transferred to the SSA, which meant the Inspector-General of Intelligence, who has the power to demand to see any document held by the state, had to request its budget allocation from the SSA’s director-general, who is the accounting officer.

This meant Dintwe had to request his office’s budget from Arthur Fraser before Fraser was moved to Correctional Services in April 2018. Fraser has been heavily implicated in State Capture by the High Level Review Panel into the SSA, and has said he wants indemnity from arrest and criminal prosecution before appearing before the Zondo Commission.

Explaining how the Office of the Inspector-General of Intelligence, although tasked to oversee intelligence services across three ministries, has a complement of only 34 staff, 10 of which are vacant, Dintwe said he wrote to Fraser as SSA director-general in 2017, requesting money be released for the vacant posts. The Office of the Inspector-General of Intelligence was going on a recruitment drive, he said, and he had received an in-principle agreement from then state security minister David Mahlobo that the positions could be filled. This included critical posts such as oversight principal officers for crime intelligence, the SSA domestic branch and SSA foreign branch.

The response, he read to Judge Zondo, was: “Regrettably the State Security Agency is unable to adhere to your request for funding of the posts as identified in your letter. The State Security Agency has adopted and endorsed a strategic development plan as deemed and as a consequence thereof realised its operational structure and strategy. This process is under way and in its final stages will determine priorities of filling vacant posts.”

This caused Judge Zondo to laugh incredulously, asking: “What does that have to do with you?”

The Intelligence Oversight Act empowers the appointment of employees necessary for the functioning of the Office of the Inspector-General of Intelligence.

To make matters worse, prior to Dintwe’s appointment the position of Inspector-General of Intelligence had been vacant for 22 months, following the departure of the last incumbent, Faith Radebe. As a result, the head of corporate services had in the 2017 financial year told Fraser they could not spend the budget they had, so it was reduced.

It was not increased to its former levels when Dintwe was appointed.

But of equal or even greater concern was Dintwe’s revelation that the Office of the Inspector-General of Intelligence had to share the SSA’s IT infrastructure, including its internet server. This meant everything his office did could potentially be observed by the SSA, including any investigations into the SSA or complaints made by the public against the SSA.

This undermining of the Inspector-General of Intelligence’s constitutionally mandated independence was raised in the Matthews Commission Report of 2008, which found the inspector-general did not have operational independence from the organs of state that required oversight.

Yet the same issues had not been addressed 13 years later, with Dintwe telling the commission how the ministers of defence, police and state security had tried to block his appearance before the commission.

He explained how the Intelligence Oversight Act compelled him to consult with the three ministers and the president before disclosing any intelligence or information that is subject to any restriction.

The consultation process had been “very difficult”, having been opposed by all three ministers and resulting in their recommendation to President Cyril Ramaphosa that he be suspended.

He said he had had a “very hostile” meeting with Police Minister Bheki Cele, Defence and Military Veterans Minister Nosiviwe Noluthando Mapisa-Nqakula and State Security Minister Ayanda Dlodlo who then jointly lodged a complaint against him providing information to the commission.

Ramaphosa had informed him in a letter that the ministers had complained and recommended his suspension.

The complaints and the question of suspension were referred by Ramaphosa to Parliament’s Joint Standing Committee on Intelligence, with, said Dintwe, a message that he hoped they would find in his favour.

The committee, according to Dintwe, said the ministers’ allegations were unsubstantiated, and there were no rules in Parliament dealing with the removal of an Inspector-General of Intelligence.

He said Dlodlo went so far as to try to act on behalf of the Inspector-General of Intelligence.

“The commission would have received a letter and an arch file, where minister [Dlodlo] decided to act on my behalf – such an independent office – act on my behalf and to send the regulations, the oversight act, and the letter was addressed to the chair that we are assisting Dr Dintwe here as it seems he wants to give you more than you require.”

Judge Zondo said he seemed to recall receiving a file that came “from outside the commission” but could not recall the covering letter.

He expressed concern that despite the 2008 Matthews Commission Report and a previous report of 2006 enforcing the need for full and effective independence of the Inspector-General of Intelligence, the High Level Review Panel came to the same conclusion as nothing had been done in the interim. This was particularly concerning in light of the “kinds of abuses I’ve heard about inside the SSA”.

Dintwe returns to the commission on Wednesday evening. Earlier in the day, the commission will hear Eskom-related evidence from an expert witness from Quintessence Digital Forensics, Professor Cecil Louwrens, from 10am. Former Prasa CEO Lucky Montana is also expected to return to the stand during the day. DM