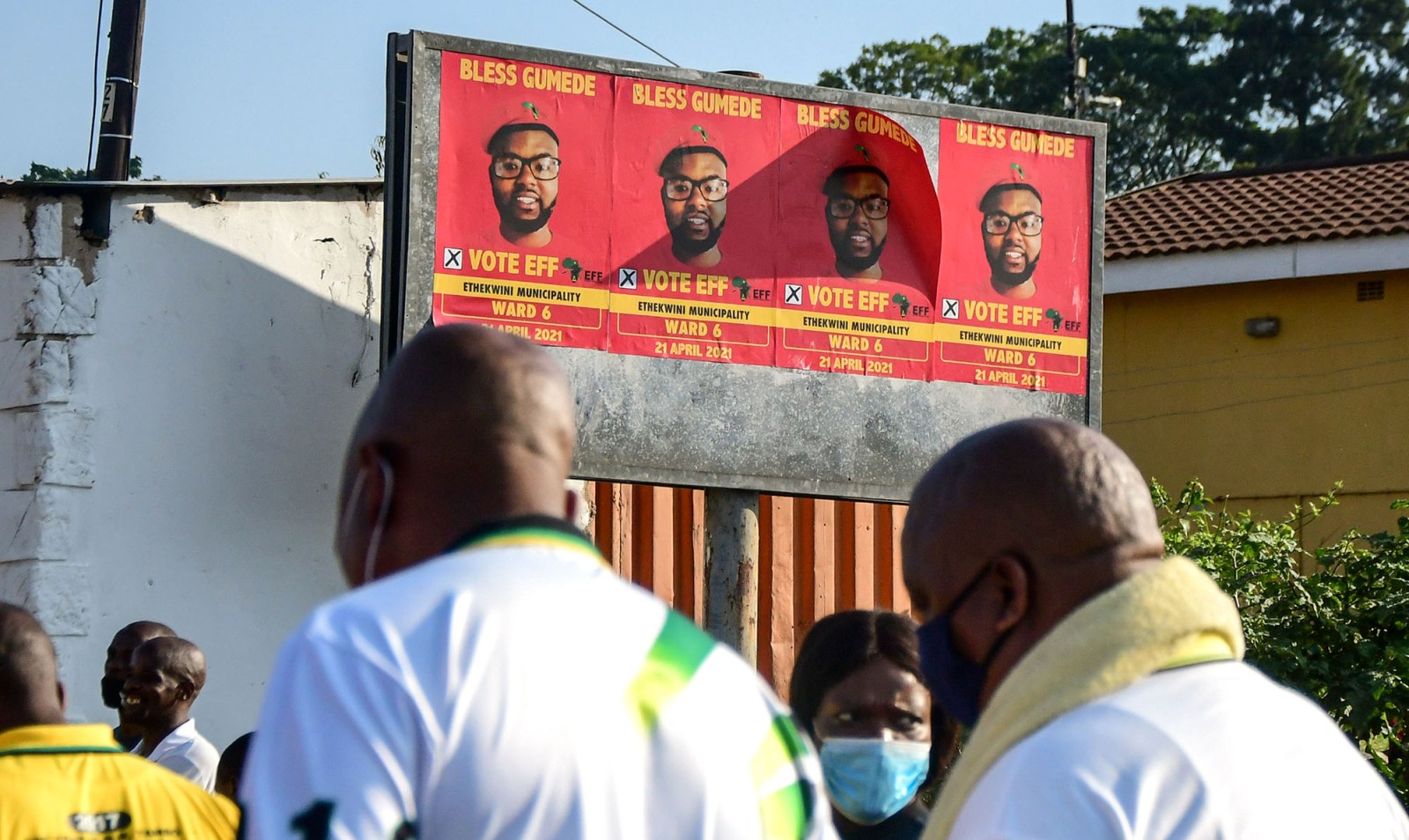 EFF by-election nominee posters of Bless Gumede during the by-election campaign led by President Cyril Ramaphosa in Ward 6 on April 15, 2021 in Durban, South Africa. According to a media release, President Ramaphosa mobilised ANC members and supporters to vote for the ward candidate representing the ANC in the by-elections that are scheduled to take place on the 21st of April. (Photo by Gallo Images/Darren Stewart)

By-elections take on extra significance from now, with the date for the country’s local elections set for 27 October. The announcement by President Cyril Ramaphosa was made on the same day as 14 by-elections were held, including KwaZulu-Natal, where there were a few dramatic shifts.

See  earlier preview:  KwaZulu-Natal, Eastern Cape and Mpumalanga: some safe seats for the ANC plus few tricky assignments for DA and IFP

The African National Congress (ANC) shocked the Inkatha Freedom Party in a rural ward in Maphumulo, in the iLembe district of KwaZulu-Natal near the North Coast. The ANC also came close to winning a ward off the IFP in Kwadukuza in iLembe. The EFF continued to make good inroads in ANC fortresses in eThekwini and the southern part of the province. It will be the former which concerns the party the most because if that trend continues the ANC might well need to look for coalition partners in eThekwini after the 2021 local government elections.

The ANC will be delighted with the ward pickup in Maphumulo, and satisfied with the very close contest with the IFP in KwaDukuza. They will be slightly concerned with the other Maphumulo result, a result which will give the IFP something to be optimistic about, after the Ward 5 loss.

As we head to the local government elections, the ANC will believe that the results from these by-elections mean that they are likely to remain the dominant party in the iLembe District and by extension the North Coast of KwaZulu-Natal.

The EFF’s good outings in eThekwini and the Harry Gwala District will make this something to monitor closely in the 2021 Local Government Elections, as the party could bring the ANC below 50% in the eThekwini metro. The party could get many more councillors elected in the southern part of KwaZulu-Natal in general and the Harry Gwala District in particular.

There were three by-elections in this district which include towns such as Stanger, Ballito and Ndwedwe.

Maphumulo is a rural municipality west, and northwest of KwaDukuza. Much of the land is under the custodianship of the Ingonyama Trust. Indukwende sits on the R74 regional road between Maphumulo and Kranskop. It is a rural, sparsely populated ward. The IFP won here by over 900 votes in 2016.

The ANC also held Ward 7 Qwabe Mthandeni in Maphumulo. The result here was a stark contrast to their win in Ward 5 as they lost ground to the IFP and an independent candidate, Sibusiso Mthembu.  The ANC’s percentage vote share dropped from 81% (proportional representation (PR) ballot) to 53%, and the IFP received 29% of the vote, up from 13% (PR). Mthembu won 15% of the vote. Turnout was 42% (58%).

KwaDukuza is on the North Coast of the province. It is north of eThekwini. Its principal town is Stanger and includes holiday towns such as Ballito. Ward 5 is in Lindelani, north of Stanger on the periphery of the town. Lindelani has sadly seen a lot of violence centred on political activity in the area. In 2014 ANC activist Winnie Mhlongo was murdered on election day while volunteering for the ANC. There was also violence in the ward in the lead up to the 2019 elections. Three of the candidates in this by-election were either victims or targets of political violence.

The IFP had a narrow win here in the by-election, holding on by 82 votes. The IFP lost ground to a former IFP councillor, Aubrey Baardman who won 15% of the vote and they also lost some support to a new party, the Independent Alliance. The Independent Alliance also affected the ANC in its stronghold in the ward. The IFP leaning section of the ward has many more voters than the part of the ward, which is favourable to the ANC. Despite the IFP losing ground in this voting district, it was still able to attract sufficient voters to keep this seat in its control. Turnout was 54% (71%).

This ANC stronghold is in the west of Durban, on the periphery of the metro.  President Cyril Ramaphosa campaigned here before the by-election. The EFF made inroads in this traditional ANC vote-rich area. The ANC might have won comfortably but if the EFF can continue to make inroads like this in wards where the ANC have always run up the numbers, then the party runs the risk of losing its outright majority in eThekwini. Turnout was 26% (60%).

The district is in the southern part of the province in the Griqualand East area. It is a traditional stronghold of the ANC. It includes towns like Kokstad, Underberg and Bulwer.

Ward 4 encompasses the township of Ixopo and the area north of Ixopo by the Mariathal Mission on the R56 road. It also includes a rural settlement northeast of Ixopo. Ixopo is where the seat of power in the municipality is. The ANC beat the EFF by a margin of 8:1 in 2016. The EFF more than doubled their percentage support in this by-election. This is an encouraging result for the EFF. Turnout was 34% (60%).

uMzimkhulu is the municipality in KZN where the ANC is the most dominant. It holds 38 of the 43 seats.

The ward is south of Umzimkulu, on both sides of the R56 road. It is a rural ward. The EFF did very well in the most secure ANC municipality in the province. They reduced the ANC’s percentage vote share from 90% to 68%, while the EFF grew by more than 400%. Turnout was 45% (61%). DM