The gospel according to Abahlali baseMjondolo: Land occ... 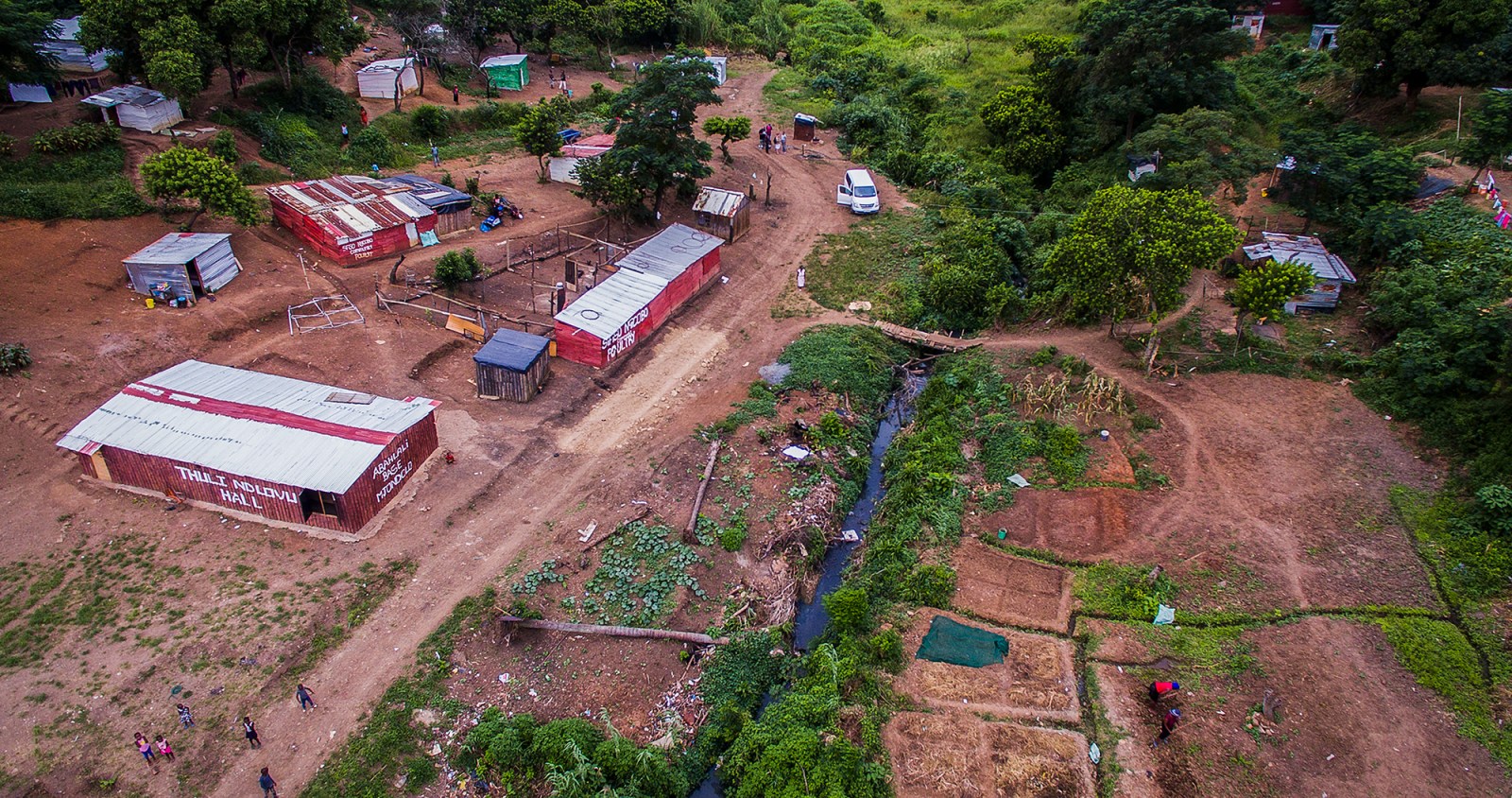 A drone image of the village with community hall to the left of the image and their food garden to the right. (Photo: Shiraaz Mohamed)

The ‘socialist’ commune is one of Abahlali baseMjondolo’s newer land occupations, and one that the militant organisation of shack dwellers – as they describe themselves – is exceptionally proud of.

The commune of Khenana perches in the Cato Crest area of Durban like a broken Eden in need of God’s breath.

But here, in the heart of eThekwini’s informal settlements, it is the gospel according to Abahlali baseMjondolo that takes precedence, with the philosophy of Frantz Fanon having cut a trail in the wilderness.

“Look at this beauty,” a smiling Mqapheli Bonono says as he welcomes Daily Maverick to Khenana. Bonono is Abahlali’s deputy president, and says it is the “vision” accompanying the commune that sets it apart from other Abahlali “occupations”.

Indeed, there is beauty in this roughness, where the heels of laughing children kick up dust from the hard earth and chickens sprint manically when called to feed. “We started with 12 chickens, now we have over 300. We are looking to sell some for ritual purposes,” Bonono says.

When the children are still, the place is silent and the peace unmatched. The trees are established, magnificent, and provide a welcome barrier from the brutal Durban sun.

Khenana is home to 110 families, with about 40% of the adults employed in low-wage work outside the commune. The remainder tend to the place – its vegetable crops sunk into dry, stony ground – and the myriad plump, cheeky chickens with the shiniest of feathers that roam the grounds.

Many of the residents came to Khenana from surrounding settlements in 2018 – the official date Abahlali has given to the birth of the place – to escape unscrupulous “landlords” overcharging on shacks, or politicising the “allocation” of shacks, or simply to escape filth, overcrowding and crime.

Khenana is one of KwaZulu-Natal’s estimated 937 informal settlements, comprising about 393,167 informal dwellings, according to information Daily Maverick received from the province’s public works department.

eThekwini carries the bulk of the settlements, having an estimated 584, made up of about 322,517 households.

When asked how much it would cost to adequately house the province’s shack dwellers, KZN public works spokesperson Mbulelo Baloyi told Daily Maverick:

“Our approach has never been to target shack dwellers per se as they remain a moving target, but we look at the housing backlog in its entirety, including the informal settlements inhabitants.

“As at January this year, the housing backlog was at 522,243 units that we still need to build. Arithmetically this backlog will be eradicated by the year 2051, if we deliver an average of 18,000 housing opportunities per year, and there is no reduction in budget.

“At the current budget of R4-billion multiplied by 30 years that equates to R120-billion, but this includes all housing instruments, not only those that cater for shack dwellers.”

Baloyi said that provincially, “no more than 10” new settlements were established annually, thanks to land invasion units.

Khenana has seen its share of “bloodshed”, residents told Daily Maverick, as eThekwini’s feared Land Invasion Unit tried to evict the occupiers from what the residents say is state-owned land. The “brutality” of the unit is never out of mind for community members, who have chosen to dedicate certain structures or gardens in the commune to Abahlali activists who have died in the district as a result of violent evictions, or who have been killed “by unscrupulous ANC leaders who want the land for themselves”.

The animosity between Abahlali and its president – S’bu Zikode – and the governing party is no secret. Zikode and former eThekwini mayor Zandile Gumede – in particular – had a poor relationship. Zikode had no qualms about publicly calling her a “liar”, “thug” or “corrupt” during her term of office.

It’s a reflection on the ANC, said Bonono, that their councillors would tell the municipality “you can’t let those guys occupy land [in Kenana], and then the councillors would try to take it for themselves so they can rent to people”.

Khenana residents regularly gather at their Frantz Fanon School, situated inside the Thuli Ndlovu Community Hall – built by the residents – for lectures on Fanon’s philosophy, “broken down into simple English”, or to listen to lectures on social issues and communal living, hosted by Abahlali’s local council leadership.

Thuli Ndlovu was Abahlali’s KwaNdengezi chairperson. She was gunned down in her home in 2014 after blowing the whistle on corrupt ANC eThekwini councillors Mduduzi Ngcobo and Velile Lutsheku.

They were found to be allocating houses to people who were not from the area. The councillors hired a hitman to deal with Ndlovu. All three were eventually sentenced to life, although charges had initially been dropped.

The Thuli Ndlovu hall is situated just metres from a large chicken coop, named after land rights activist and Abahlali regional chairman Sifiso Ngcobo, who was shot and killed in 2018.

Another land rights activist, Senzo Gumede, was also killed in 2018. Abahlali said at the time that he was “threatened by the local taxi bosses who complained about [his] role in organising the road blockades used to defend [the Khenana] occupation”.

Numerous Abahlali activists, members or supporters have been killed in the last 10 years, among them 17-year-old Nqobile Nzuza, who in 2013 was shot and killed by police in Cato Crest while protesting against illegal evictions.

Also killed in 2013 were Thembinkosi Qumbelo and Nkululeko Gwala. Khenana’s “food sovereignty garden” has been named in honour of Gwala.

“When we are killed it is not seen as political killings, but the killing of people who are less than human,” Bonono told Daily Maverick. “This is a way for us to remember those who fought for us.”

Everything in the community is shared, including the profits from a small spaza shop. The hard land needs to be tamed though, and while crops such as spinach are showing promise, shade cloth is needed to protect the plants, and seeds are needed to increase produce, says resident Zinhle Dlamini.

Also needed are books and children’s books (colouring books of Che Guevera would be great for the kids, giggles an Abahlali leader), and a way of transporting eggs so that they can be sold. A first aid kit would also be a bonus, say the residents.

“We live off what we make,” Dlamini told Daily Maverick. This is part of Abahlali’s stated philosophy, as espoused at the official “opening” of Khenana, where residents were told that land must not be occupied simply for the sake of occupying. It must be worked and made productive.

“At this point in time we have not explored selling our produce. Although comrades are exploring where to sell spinach,” said Dlamini, who left her shack to join the commune after ructions with her landlord.

“Where we are now is what we have been wanting to do for the longest time. But if we can make it better, we will try and take those steps to make it better.

“It’s very peaceful here. The thought of everybody being on the same level is just – you know – nobody is better than anyone else. We all have something to do, something to contribute. There is no envy, none of that. We all have the same.

“We try to conscientise everyone so they understand why we are doing what we are doing. You won’t participate unless you understand what it is about. So we teach each other about history, about socialism, communism.”

Daily Maverick asked the three women if they felt safe in Khenana. “Yes. Here we are like the men, and they know that. We work as hard as men. We are safe here.”

There are flushing toilets built into outside shacks at Khenana, and outside taps, but, as with all informal settlements, services are “diverted” from legal connections. “In this area, nobody pays for water,” says Dlamini.

According to KZN public works, using the current housing subsidy per unit, it would cost R51.6-billion to accommodate eThekwini’s current population of shack dwellers.

“That does not take into account inflation over time, or the additional cost of building on eThekwini’s steep slopes.  This is why the city has embarked on a programme to address living conditions in informal settlements through the provision of basic services including electricity, water, sanitation, road and footpath access, stormwater controls and waste collection.”

He added that 23 projects would be servicing sites, which would yield about 10,000 serviced sites, “resulting in 10,000 households benefiting from permanent services”.

“During this financial year – which started this month – there is a ring-fenced funding of R714-million allocated towards the upgrading of informal settlements, which will be used for the following: land acquisition of R91-million, planning of R167-million, and installation of services at R456-million.” DM