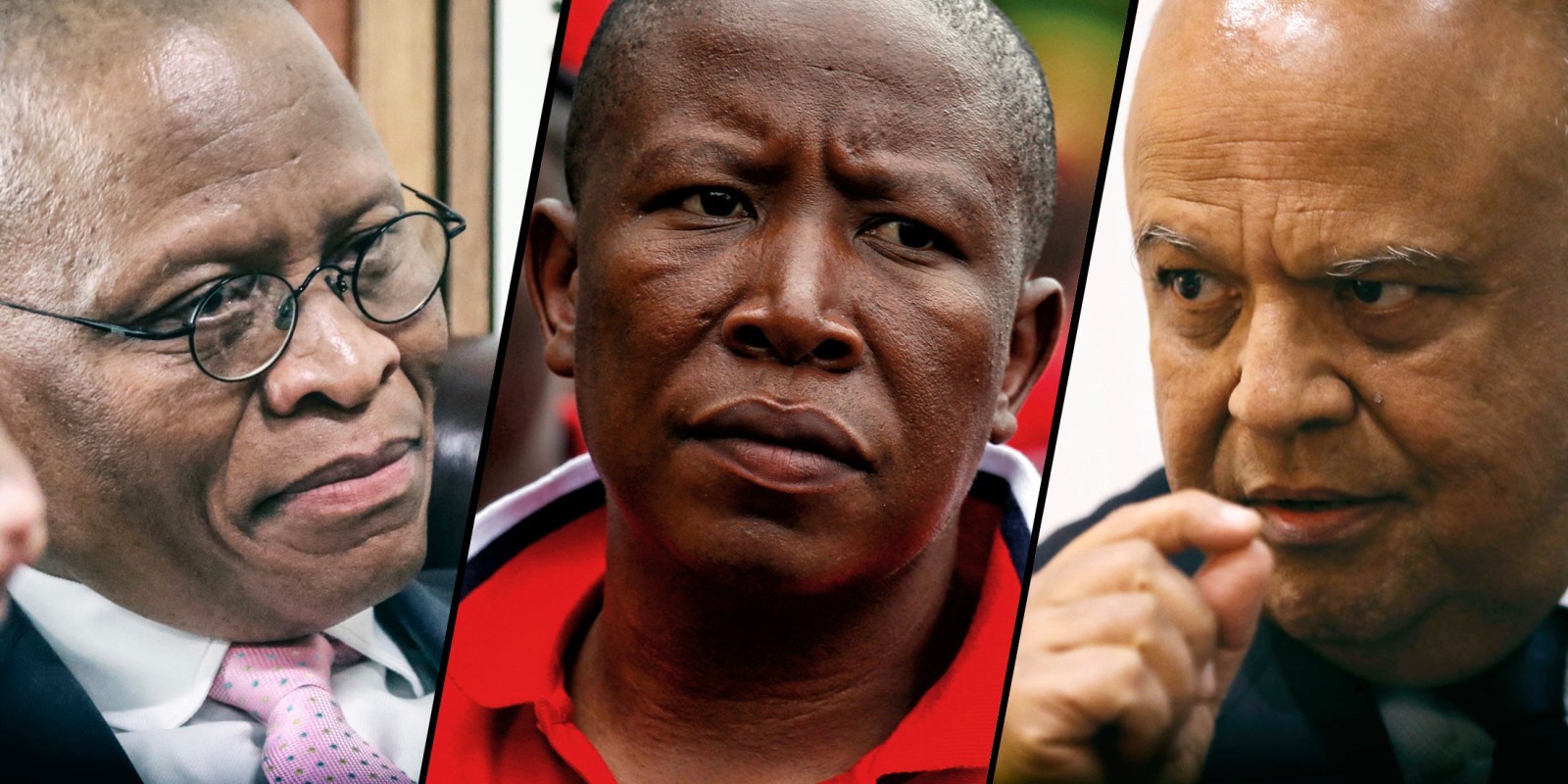 The dust kicked up by Chief Justice Mogoeng Mogoeng’s statement about a comment made to him in 2016 by Pravin Gordhan over a judicial appointment, brings particular attention to the relationships between politicians and judges in the elite circles of our society. The entire issue, however, may have been hijacked by those involved in long-running disputes with Gordhan.

For the moment, there is no evidence that any ruling has been affected by such a relationship in the recent past.

There is a reason why Judicial Service Commission (JSC) interviews often reveal such important developments, and why they become the subject of conversation.

There is perhaps a general perception that judges and politicians do not interact, that they mind their own lanes and deal with their own issues. In the case of judges, there is a legal obligation not to get involved in any political controversy; it is for this reason that their public statements outside of their judgments are usually so circumspect (although there is an odd exception).

The JSC hearings are perhaps the only public space in which this interface between politicians and judges is revealed. It is precisely when a serving judge is being interviewed for a place on a higher court that these issues all come to the surface.

And so it was on Tuesday night.

EFF leader Julius Malema (who is a member of the JSC representing his party) made various claims about Judge Dhaya Pillay, claiming that she was a member of a “faction”.

His main motivation for this was her friendship with Gordhan. The two have known each other from their days as activists in the Struggle.

As Pillay explained, she also knows former President Jacob Zuma from that time.

Malema’s hatred for Gordhan is well documented; this may have been an opportunity for him to once again display both that feeling and an apparent antipathy for some Indian South Africans.

Then Mogoeng, chairing the hearings in his role as chair of the JSC through his position as Chief Justice made an intervention of his own.

Mogoeng said that he had once been asked to meet Gordhan, while he had been a Cabinet minister. Gordhan’s office requested the meeting, which Mogoeng says came as a surprise as they had met only once before.

“I really don’t know what the purpose of the meeting was. I don’t have a clear recollection… what stuck in my mind and left me puzzled was the following. He asked me a question, he said, how did my friend Dhaya Pillay perform? And the thing has stayed with me and got me renewed… why did the Honourable Minister make an effort to meet me, we are not friends, I don’t know him from anywhere except from television; why did he make a trip to seek an audience with me to ask why did my friend Dhaya Pillay, perform.”

Mogoeng did not give other details of the meeting.

It would appear that his memory was stimulated by the exchange between Pillay and Malema, and that was the context in which he made the comment.

Gordhan then responded, formally through a letter to the JSC.

In his letter, he said that the meeting he asked for with Mogoeng had either related to a matter involving the Tax Ombud (who is a former judge) or to discuss issues arising for the National Treasury out of the Nkandla judgment (which required the National Treasury to make various determinations around what then-president Jacob Zuma owed the government for the non-security upgrades to his home).

“The enquiry about Judge Pillay was purely incidental to the purpose of the meeting. In any event, as the Chief Justice himself indicated at the JSC, by the time I met him to discuss one or more of the matters outlined above “it was public knowledge that you (Judge Pillay) did not make it”. I want to state emphatically that I would never, and nor did I in any way, seek to influence the Chief Justice, whose independence I have always respected.”

This then puts up two versions of the same meeting.

It is important to note that there are no inherent contradictions within these versions, they can be seen as entirely consistent. Both parties admit to not having a full recollection, both admit to a “comment” about Pillay.

Of course, the real issue then becomes intent, and whether it is correct for a Cabinet minister (apart from the minister of justice) to speak to a Chief Justice about a judicial nomination in any context.

This is because of the way they are perceived by many in the middle classes.

Of course, the EFF’s Floyd Shivambu has now laid a charge of “corruption” against Gordhan, claiming that he was trying to influence the appointment of a judge.

It may be impossible to prove this, as both Mogoeng and Gordhan say the meeting came after the JSC had announced its decision. If Gordhan really had an intent to influence such a nomination it would be incredibly clumsy to approach the Chief Justice just after the process had been concluded.

And, as we were recently reminded in Judge John Hlophe’s ruling in a case discharging Bongo of corruption, the charge requires a “gratification” for an act, the person has to be paid or must be offered a payment for the act of corruption they commit for it to be legally found to be an act of corruption.

This again suggests that the EFF is using the Mogoeng/Gordhan controversy to pursue its long-running agenda against Gordhan (this apparently includes a Twitter campaign; a series of accounts were pushing this line on Wednesday morning, including one which has a track record of more than 2,000 tweets, but had a grand total of zero (0) followers).

In the US and the UK for example, people who went to Yale or Oxford could well become either politicians or judges.

In Britain, 74% of judges went to either Cambridge or Oxford. Three-quarters of that country’s prime ministers went to either of those universities (but mostly to Oxford).

Here the links between judges and politicians can often be found from the Struggle.

Our first Chief Justice, Arthur Chaskalson, defended ANC leaders (including Nelson Mandela, who appointed him) during the Rivonia Trial. Former Chief Justice Pius Langa’s brother, Ben Langa was an activist in the ANC (and in a tragic moment was murdered by ANC members allegedly manipulated by apartheid agents, something both Thabo Mbeki and Jacob Zuma apologised for as leaders of the ANC).

Supreme Court of Appeal Judge Azar Cachalia’s brother, Professor Firoz Cachalia, was an MEC in the Gauteng provincial legislature (another relative is Ghaleb Cachalia, the DA MP whose language is less than academic or judicial in tone).

Just one firm of attorneys that operated during apartheid, Maluleke, Seriti and Moseneke, produced five judges after apartheid that were sitting on various courts at the same time.

But it also cannot be said that these relationships necessarily determine people’s courses of action. Zuma was at Robben Island at the same time as former Deputy Chief Justice Dikgang Moseneke. Moseneke may well have been referring to him when he commented on the “delegates at Polokwane” during a birthday party. This did not lead to Zuma appointing him as Chief Justice.

Pillay explained during her JSC interview that before hearing a case in which she made a finding against Zuma, she had recently been invited to lunch with him. It did not appear to result in a favourable finding for him.

There are, of course, numerous cases that went against Zuma, and in some cases the ANC, over the years.

This suggests that, for the moment at least, there is no track record, or evidence, or any kind of serious claim that can be made to suggest that our courts do rule politically, or with political intent.

However, there are people, obviously, who have plenty to fear from judges.

Malema, and the EFF more generally, may be among them. There are several cases against Malema and other EFF leaders now before the courts, and the a great possibility of others in the near future. It has never been adequately explained why, for example, he has not faced charges relating to corruption in Limpopo in a case which was adjourned because his co-accused was ill (he recovered). It may well be this that motivates the behaviour of the EFF and its followers.

The Mogoeng/Gordhan event is a puzzling flash in the pan during one of the crazier periods in our recent history. It is likely to be forgotten soon, replaced by the next series of similar flashes in the run-up to the main act, the ANC NEC meeting later in April, which should decide Ace Magashule’s fate. DM