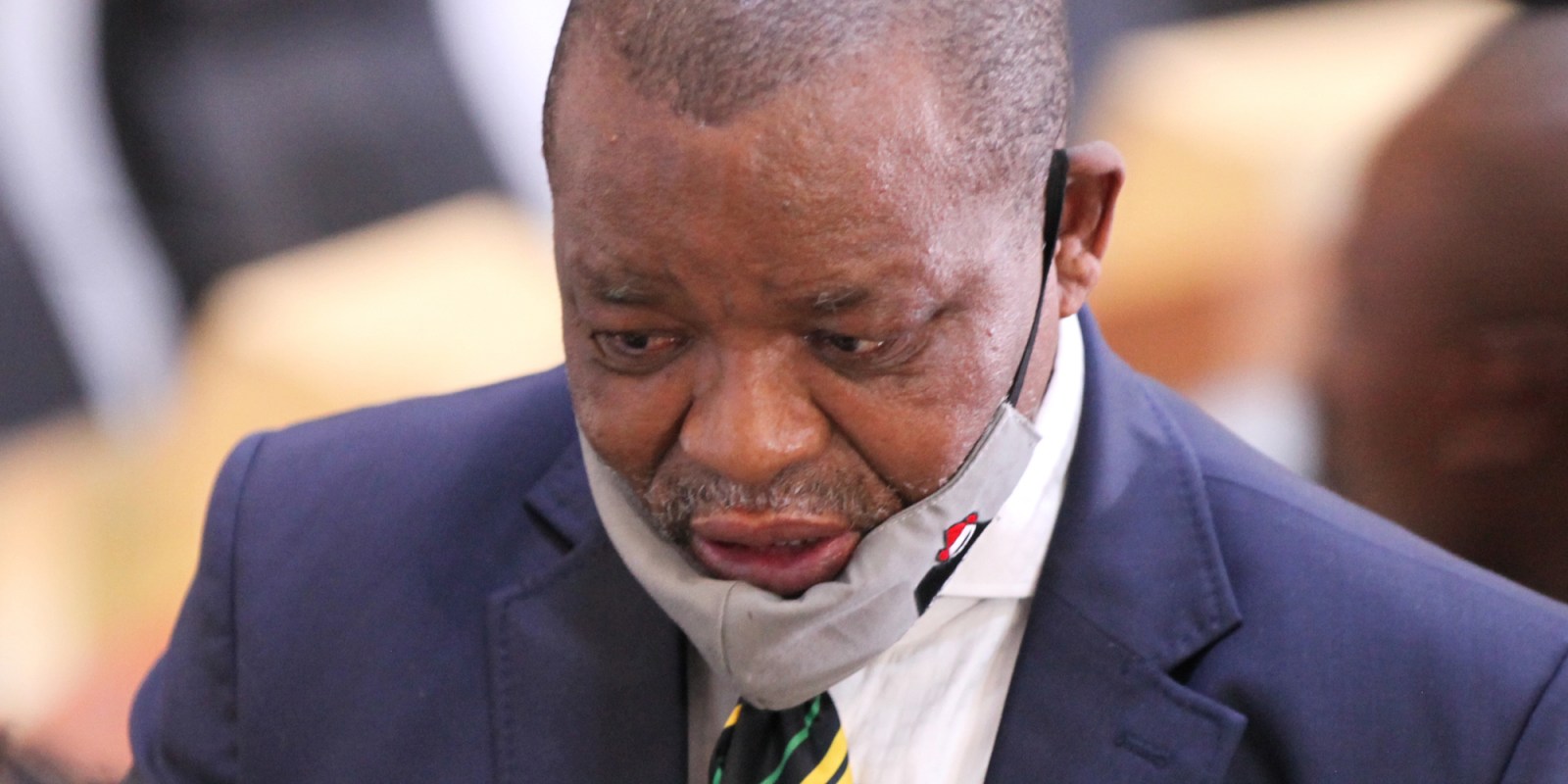 Gwede Mantashe reveals the ANC instructed its MPs and ministers to resist State Capture – but only years after revelations of grand corruption first emerged.

ANC chairperson Gwede Mantashe has told the Zondo Commission of Inquiry that the party will never sanction support for a parliamentary motion of no confidence in its president. He was asked why the party had not supported multiple motions at the height of State Capture.

Mantashe on Wednesday gave nine hours of testimony before the State Capture inquiry probe. (Read his previous on-day testimony here and here.) He is the first top ANC leader to account for the discussions in the party as the Gupta family’s encroachment on the state became clear from 2011 onward.

“There were a series of votes of no confidence (about eight, I think) and not all of which were pushed all the way. My personal impression is that initially, they had a tiny prospect of being taken seriously. As time went by, [there was] more and more political pressure from the public for these votes of no confidence to be considered on their merits. Many people took the view that there was substance in the complaints being raised.”

“Do you agree, and why did you feel it necessary to instruct [the ANC] caucus not to support such votes?” evidence leader Alec Freund SC asked Mantashe.

“We take it [the issue] seriously, but it’s one area we think we should resist all the time,” said Mantashe, who repeatedly said the ANC had recalled two presidents.

“You don’t vote against a sitting president,” he said, adding that only nine ANC MPs had voted with the opposition in those votes, and that only former ANC MP Makhosi Khoza had revealed her dissension.

“The ANC, of its own volition, has removed two presidents because there were issues. We can’t open presidents of the ANC to be sitting ducks [to parliamentary motions of no confidence]. I can assure you, if there’s another vote, I will go to Parliament and say, ‘It’s unacceptable to remove your president on a vote of no confidence,” said Mantashe.

Commission chairperson Deputy Chief Justice Raymond Zondo asked whether there might be circumstances where ANC MPs would want to support a no-confidence motion. “When the member may believe it is in the interests of the country, the republic… this president should be voted out of office?”

Mantashe hung tough. “If you allow a free vote on a motion of no confidence, we will deal with a crisis immediately. It will create tensions in the party,” he said, adding that even when the party removed former president Thabo Mbeki from office, it provoked a split that saw Cope take 37 seats. It had only ever allowed a single open vote, when South Africa legalised abortion and when three MPs opted to vote against the freedom of choice.

“[People ask], is it the ANC first or the country first? We say it’s the country, but politically [a motion of no confidence] will be a disaster. The ANC must be able to decide to recall its president,” said Mantashe.

“Such a decision will be cutting off your nose to spite your face. You will destroy your party.

“We are all paying the price.”

Freund asked Mantashe why despite many media revelations of the Gupta family’s capture of the state, the ANC did not do anything for several years. “If you had investigated thoroughly at the time, we would not be having his commission. Those allegations were not taken seriously, and we are all paying the price.”

Mantashe said the ANC did not trust the media reports.

“According to the analysis we made, this [was] a racist stance made by that newspaper,” he said about one of the reports Freund referred to. The party only started looking more deeply when the Gupta family landed a wedding plane at the Waterkloof airbase. Later, Transport Minister Fikile Mbalula (then in a different portfolio) cried during an NEC meeting. He revealed that the family had told him of his future Cabinet portfolio before then-president Jacob Zuma could appoint him.

“We asked Mbalula about his outburst. As secretary-general, you move with slow speed, so you don’t rush things and create a crisis,” said Mantashe.

“As secretary-general, your duty is to navigate through that stormy weather with care because there is an organisation to protect,” he said, adding that the party then started telling Cabinet ministers and MPs not to act illegally. “We said, please don’t do what is not legitimate as an instruction – and many began to do that, and many paid the price for that.”

Mantashe was referring to the regular Cabinet reshuffles that Zuma made to bring more malleable politicians into his inner circle and to the axing of state-owned entity boards when they would not bend to the Gupta network’s will.

Asked repeatedly why the party had not done more to counter State Capture before it throttled South Africa, Mantashe said, “The ANC will try and try and try. [We believe] no member of the ANC is incorrectible. The ANC is patient in dealing with its members. I am trying to answer the question – why does it take so long?” DM