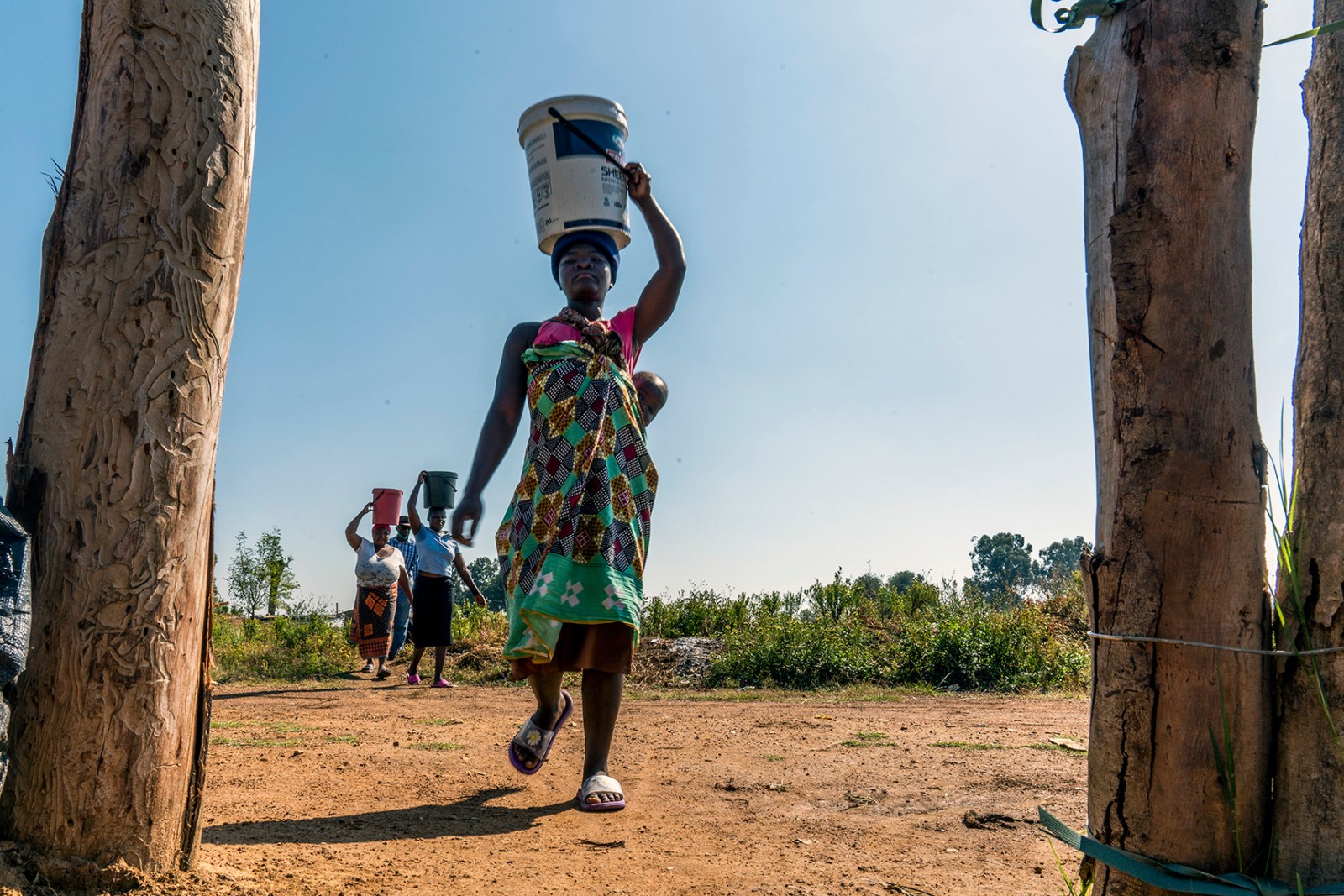 Rosa Sithole returns from collecting water at a communal tap. Sithole was evicted four days after she gave birth. Sleeping in an open field, her husband used a plastic sheet as a shelter to her cover her and her children. (Photo: Shiraaz Mohamed)

Living under the constant threat of eviction, fearing assault or worse, residents of Happiness Valley next to the Marievale Military Base near Nigel, Gauteng, are mired in despair.

“Every day I am disturbed by what is going on here. But I will fight to the end. I cannot give up,” says community leader Chris Koetsioe as he describes life in the informal settlement outside Johannesburg where residents struggle to survive.

“Even the story of the goats was before a judge,” he said. “The military wouldn’t let my goats walk on the land. We even had to get a court order for them.”

The South African National Defence Force (SANDF) is facing a lawsuit for damages after what was described in papers before the Gauteng High Court as “an ongoing campaign of violence and intimidation” against the residents of the settlement near Nigel.

Earlier in April 2021, the court issued an interdict in the drawn-out litigation between the residents and the SANDF, preventing soldiers from breaking down more shacks, using firearms to “harass” them and assaulting them.

The residents of Happiness Valley are the remaining members of a group of a few hundred who moved on to the military base in 2017 after it had fallen into disrepair. After they were evicted, some established a new informal settlement next to the base while others moved to land made available by the Ekurhuleni Local Municipality.

Judge Norman Davis, who issued the latest order, described the relationship between the parties as “an ongoing saga of unhappy co-existence”.

While the land on which Happiness Valley is located does not belong to the military, it is under the military’s control and is used for training, including the use of firearms, smoke and hand grenades, and dog training.

Koetsioe said stress around the fate of the village was having a huge impact on residents’ health.

“Once, when I was in Limpopo, my wife had a heart attack. It is the stress of living here. It is terrible,” he added.

“This place took my friend Veli’s life. He was our secretary. There is no justice for him. Once we were driving to see the lawyers. He said he was not feeling well. I took him to hospital. He was in ICU and then he died. It is just bad.”

The military has denied all allegations of assault but admitted it was breaking down newly built shacks in Happiness Valley in terms of an agreement with the community. DM/MC