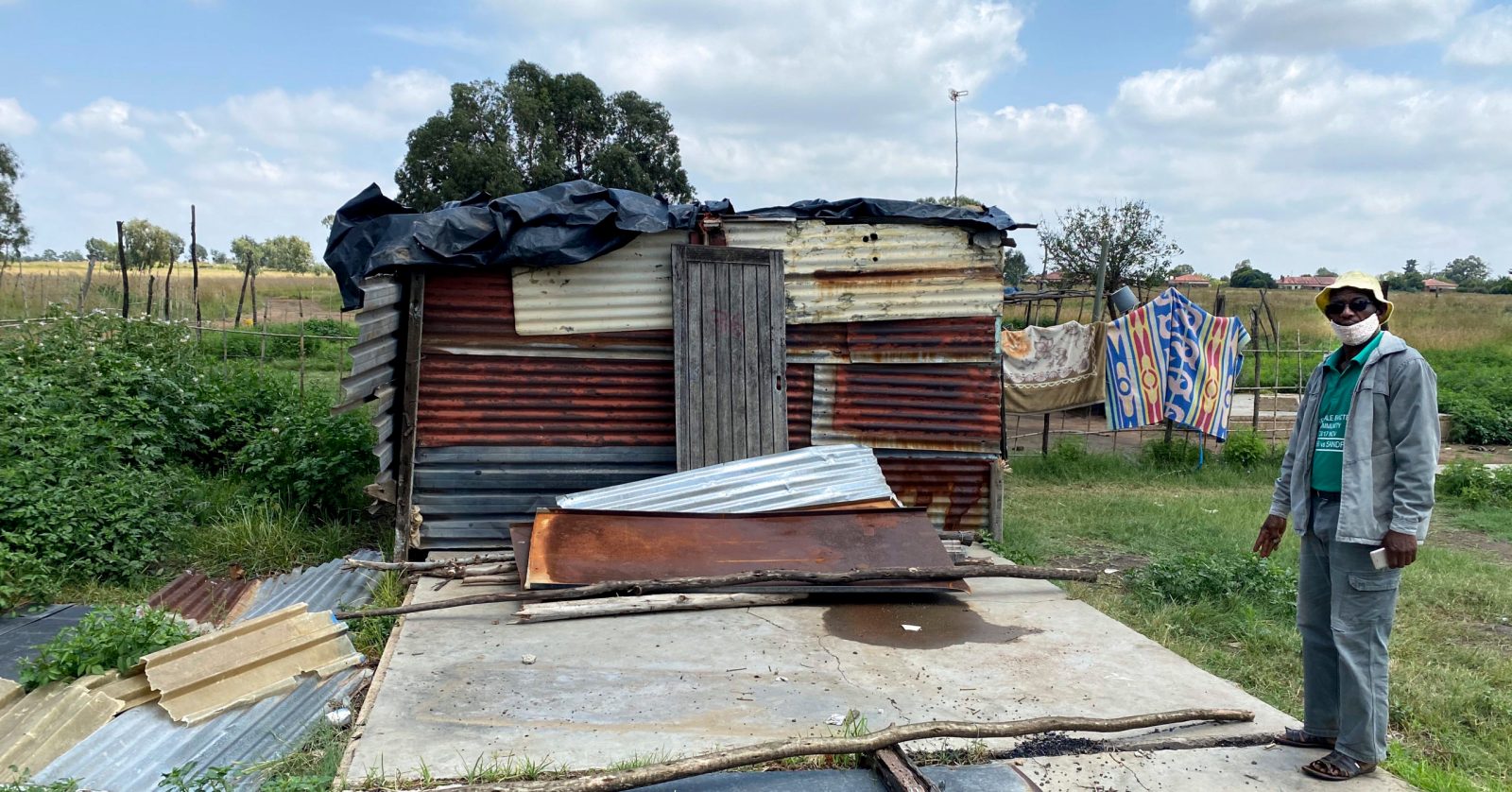 A resident of Happiness Valley points out where soldiers had demolished one of the structures in the village. (Photo: Supplied)

A high court this week issued yet another order against the SANDF to stop ‘raids’ on Happiness Valley, an informal settlement next to the Marievale Military Base.

The South African National Defence Force (SANDF) is facing a lawsuit for constitutional damages following what was described in papers before the Gauteng High Court as “an ongoing campaign of violence and intimidation” against the residents of Happiness Village, next to the Marievale Military Base near Nigel.

This week the Gauteng High Court issued another interdict in the drawn-out litigation between the community members and the SANDF to prevent soldiers from breaking down any more shacks, using firearms to “harass” the villagers and assaulting those living in the village.

Community leader Chris Koetsioe, who lives at House 1 in Happiness Village, said the community lives on land next to the Marievale Military Base.

They are the remaining members of a group of a few hundred people who in 2017 moved into the military base after it had fallen into a state of disrepair. After they were evicted some started a new informal settlement next to the military base, while others moved to land made available by the Ekurhuleni Local Municipality.

Koetsioe said in papers before court that the those who remained behind in Happiness Valley were seeking “urgent protection” from an ongoing campaign of violence and intimidation waged by the SANDF against them.  He said this was not the first time that they had to ask for protection against the soldiers.

“[They] consider themselves above the law and continue with their unlawful actions by demolishing houses, assaulting and intimidating residents and forcing them to relocate.”

On Tuesday Judge Norman Davis described the relationship between the parties as “an ongoing saga of unhappy co-existence”.

While the land where Happiness Valley is located does not belong to the military, it is under the military’s control and is used for training exercises that include the use of firearms, smoke and hand grenades and dog training.

In July 2020 the military moved into the village to demolish new shacks and restricted movement to and from the village by erecting a military access control gate. The spaza shops in the village were closed and military flares, smoke and thunder grenades and firearms were discharged in the vicinity of the village.

Lawyers for Human Rights then managed to obtain an interdict to put a stop to this from the High Court in Pretoria.

But last month, according to papers before court, about 100 soldiers “armed with R4 assault rifles and pangas approached Happiness Village and started assaulting residents and demolishing shacks”.

Four houses were demolished. Residents were beaten, struck with rifle butts and taken to a nearby river where they were forced to roll in the mud and wash in the river.

“They were asked why they did not want to move to Zamani [where the rest of their community moved]. Their ordeal went on for a number of hours, into the night,” Davis said in his judgment.

In papers before court, the SANDF admitted that three houses were demolished but denied the attacks on residents. According to papers before court, the houses were broken down in terms of a previous court order barring newly erected structures. The SANDF said soldiers had to return to the village to investigate stone-throwing incidents that damaged their buildings and after they received information that someone had discharged a firearm in the village.

The SANDF also expressed concern over the presence of illegal miners, whom they allege have sunk illegal and unsafe shafts that could impair the safety of the base’s munition stores.

Davis found that it was probably true that the villagers had breached their agreement not to allow for new houses to be erected, did throw stones at the military base and that there were illegal miners in the village.

“However, on the other hand, having regard to the photographs, detailed descriptions and confirmatory affidavits, I find that the soldiers have entered the village, have demolished at least three houses and have created general havoc on the night of 7 March 2021 during the course of which some villagers… had been beaten. One must also accept that this has instilled a sense of fear in the villagers and that they have a reasonable apprehension of the possibility of these events recurring, should there not be any form of intervention.”

He found that the demolition of the houses amounted to a forceful eviction without a court order and was in breach of the Constitution.

“I understand that the military has previously indicated that they do not wish to ‘run to court’, but, if the villagers breach the agreement, the military is not entitled to resort to taking the law into their own hands,” Davis said.

“Of course, the soldiers may protect themselves against any unlawful attack and of course they have the right and duty to protect the base as a military installation against attacks, but the stone-throwing incident should not be taken out of context and summarily be elevated to such an attack. In any event, only the force needed to repel an attack would be justifiable and not the entering and raiding of the village.

“Even if the military was concerned about the breaches of their agreement by the villagers and even if [illegal miners] are being harboured by the villagers, the village is not part of the base over which the military exercises jurisdiction and if there is any doubt about this issue, the military has expressly been prohibited by an order of this court from entering the village.

“This prohibition will, of course, include the use of firearms and pyrotechnics inside the village.”

He added that as Happiness Valley is located on land where military training is conducted, the training can continue as long as the lives of residents are not endangered.

Davis added that the case “screams for alternative dispute resolution”.

“This was not a case of an inexplicable set of random acts. They came about as a result of a history of attempted co-existence. Let me also be clear about the following: the requirement to mediate peaceful co-existence does not detract from the wrongfulness of the soldiers’ conduct nor does it mean that the villagers must suffer such conduct. Far from it. Such conduct amounts to ‘state brutality’.

“As indicated, the actions of the military amounted to taking the law into their own hands as well as effectively amounting to eviction of the occupiers of those houses without a court order. That is unlawful and must not occur again,” he said. DM/MC