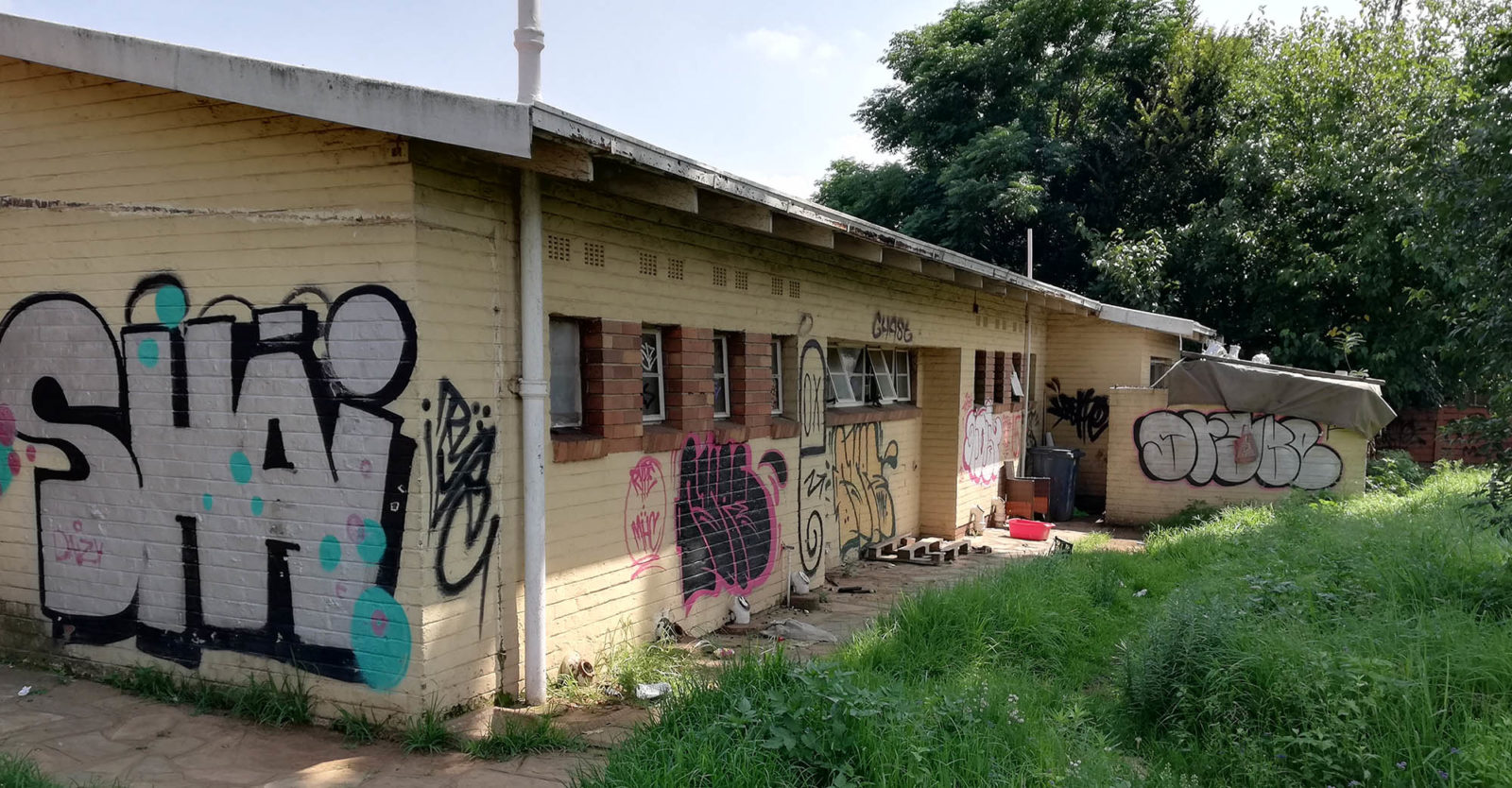 The Old Parkhurst Bowling Club is one of several buildings the Johannesburg Organisation of Service to the Homeless says it applied to lease from the City of Johannesburg so it can establish a homeless shelter. (Photo: Supplied)

As the number of homeless on the city’s streets continues to surge amid the Covid-19 pandemic, the organisation says it has been left frustrated in its bid to lease desperately needed space.

There is simmering animosity between the City of Johannesburg and a non-profit, the Johannesburg Organisation of Services to the Homeless (JOSH), which has since April 2020 been trying to lease vacant City-owned properties to use as shelters for people living on the street.

According to the organisation’s CEO, Mary Gillett-de Klerk, the City has given JOSH “the runaround” and the non-profit is now on the brink of closure because without shelter facilities it cannot apply for funding from the state or private donors.

“I’m so utterly frustrated because I don’t know what to do,” she told Daily Maverick.

The organisation is trying to establish a network of shelters to ease the growing burden of homelessness in Johannesburg, which has been exacerbated by the pandemic.

JOSH, which was established in 2013, operates from a small office at the Randburg Methodist Church where it runs two soup kitchens a week. Gillett-de Klerk says shelters would allow the organisation to offer “skills development” and other formal social work services for the homeless. Numerous donated items meant for the shelters, such as bedding and appliances, are languishing in two storage facilities.

On 22 April 2020, Gillett-de Klerk sent an email (seen by Daily Maverick) to the Johannesburg Property Company requesting to lease six vacant and derelict City-owned properties she had independently identified. These included the Old Parkhurst Bowling Club, a plot of land next to the Bryanston library and an old Scouts building on Waterfall Avenue in Craighall.

According to the City, the leasing and alienation of land is subject to the Municipal Finance Management Act, the Asset Transfer Regulations and the City’s Supply Chain Management Policy for Land. Once an enquiry is submitted it is meant to be assessed within 30 days and if approved follows a process that involves a tender advertisement for bids.

In Gillet-de Klerk’s case, the request was forwarded to the City’s social development department.

In a response to Daily Maverick, the City denied receiving an application from JOSH. Spokesperson Nthatisi Modingoane wrote:

“The City of Jo’burg does not have a record of an application by JOSH and, as outlined above, any applications have to follow the council-approved process as outlined in the leasing and land-alienation process.”

Modingoane added that JOSH had not followed the “prescribed application process” in terms of the leasing and alienation procedure.

Despite this, Gillett-de Klerk was taken on two site inspections, the second of which took place on 30 December 2020 with Bheki Sibeko, the acting head of the social development department.

Feeling that the city was dragging its feet after the initial site visit, Gillett-de Klerk sent an email on 19 November 2020 to mayor Geoff Makhubo and mayoral committee member for health and social development Sibongile Mgcina, to expedite the process.

“Given that the country is still under the lockdown provisions of the Disaster Management Act it is hoped that this process could be expedited and not subject to the normal processes. JOSH started the application on 20 April 2020 but little has been achieved to date, hence this URGENT request,” she wrote.

But according to Sibeko, Gillett-de Klerk’s unique request does not have a simple solution.

“There has never been in the City of Jo’burg a situation where… people either apply or ask or are given buildings as NGOs, so it’s a first for all of us. That’s why we’re working with [the Johannesburg Property Company] to say, if we do it, how do we do it adhering to your [Municipal Finance Management Act], the systems act, etc. So if we do get buildings we’ll follow the procedures as prescribed by those acts.”

Sibeko says the requested buildings have not yet been released to the provincial social development department through the Johannesburg Property Company. In addition, buildings would need to be renovated before they are put to tender.

However, Gillett-de Klerk feels a tender process is superfluous in this case.

“I understood there was a need for a tender, but if only one NGO has applied for these sites, has identified them, has been engaged with the [homeless] community since 2013, then why on Earth does one have to necessarily go through a whole tender process?”

She is a qualified social worker with roughly 20 years’ experience in the NGO sector. She listed her contributions to alleviating homelessness in the city, including hosting the country’s first World Homeless Day event in 2017, being one of the founding members of the Johannesburg Homeless Network and a core member of the National Homeless Network, helping set up temporary shelters for the homeless during the hard lockdown, and helping establish the Johannesburg Homeless Task Team, which works with the City.

Gillett-de Klerk said one of the buildings she had applied for, the old Scouts building in Craighall, was initially vacant, but by December 2020 had been occupied by an NGO called Unite and Share for Peace and Prosperity.

“The question remains: how did they get it? Because there was no list that was sent around.”

She had queried whether a tender process had been followed but was not given a response.

Sibeko could not say whether Unite and Share for Peace and Prosperity had acquired the building, and if it had, how.

“I have no idea if they’ve got a hold of that building. And even the place that you’re talking about, I don’t have any recollection. But if so, the custodian of the building is [the Johannesburg Property Company].”

As tensions continue to rise between JOSH and the City of Johannesburg, so does the number of homeless people.

According to data from before the March 2020 lockdown, there were an estimated 15,000 people on the streets of Johannesburg.

Chris Lund, who chairs the Johannesburg Homeless Network, said the number has grown but did not want to speculate on the exact figure.

“It’s very difficult to give you exact numbers because we don’t know. There hasn’t been any comprehensive research on numbers for probably 20 years in the City,” he said.

“There’s no doubt that it has gotten worse. The people living on the margins, the people that had piece jobs no longer have them, and they have now become homeless. That’s why the numbers have grown.”

(See also: Breaking the law / the right to food: The plight of the hungry in Jo’burg’s inner-city)

There are only about 1,000 shelter beds available in the city and Lund says the temporary shelters set up under the Disaster Management Act have either closed down or are in the process of closing.

“There always has been [a lack of shelter space] and I think we’re far behind other cities. It’s becoming a priority for social development to start looking at what available old buildings there are, but there obviously has to be a tender process that is done through the [Johannesburg Property Company]. It’s not simply a case of recognising a building and taking it over.”

He said the City had earmarked two properties in the past year for redevelopment, but this has not been done yet.

Lund, who is also the chief financial officer of the Madulammoho Housing Association, a social housing company based in Hillbrow that provides low-cost rentals, said tackling the homelessness problem doesn’t end with giving people a “roof over their head”. It requires a holistic approach that involves rehabilitation for problems such as substance abuse.

“Unfortunately, that is very expensive operationally, which is why many cities around the world don’t do it.”

As much as the pandemic has exacerbated the homelessness problem, Lund sees a silver lining.

“Covid forced NGOs, the City and the private sector to start looking at this problem and try to do something about it.”

Gillett-de Klerk said the pandemic is a springboard to deal with homelessness in a sustainable manner, but she has been left frustrated by her ordeal with the City and the possibility that her organisation will shut down.

“If there is no possibility of getting a shelter space, then I must actually admit defeat and say, fine, we did what we could. But the will of the City of Jo’burg isn’t there.