Down and out in Johannesburg: Understanding homelessness 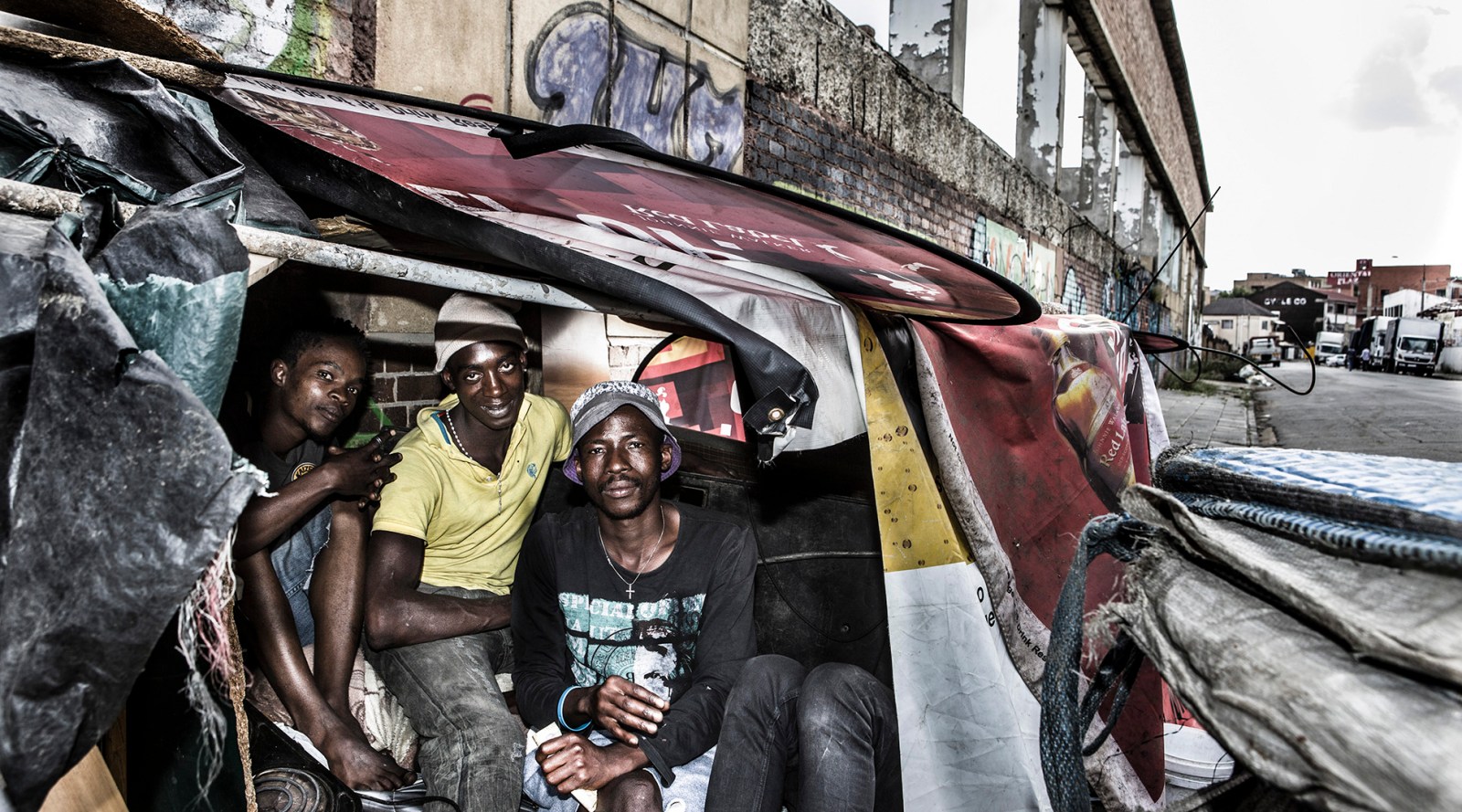 Sunday 21 March is Human Rights Day in South Africa. One of the rights in our Constitution is the right of ‘everyone to have access to adequate housing’. And yet homelessness is growing. In a series of articles being published over the next three days, Maverick Citizen asked homeless people to write about their experiences. First, an overview of the homeless crisis in Johannesburg.

There is a stereotype of a homeless person, sometimes called a street- or rough-sleeper. He is a man. He’s a loner and a beggar, mentally ill or “immoral” and helpless. If he sleeps under a bridge, in a park, or in a shop doorway, he is most likely a drug addict or an alcoholic. He doesn’t have a job, is lazy and has no family or friends to help him.

In reality, people who are nothing like this become homeless. In Johannesburg, there is an extreme shortage of affordable accommodation. Unemployment has skyrocketed and if you are not working and don’t have a regular income, it’s almost impossible to find a permanent, decent and secure place to live in a central part of town.

You might be able to rent a backyard room, a small space or a shared bed space in the inner city, where prices are high. But these require payment of several hundred rands or more per month.

Overnight shelters provide short-term solutions for a small nightly fee, but in most of these, families can’t stay together and there are strict rules like daytime lockout between 8am and 5pm. So some people resort to sleeping in places where they don’t have to pay, or where they have more flexibility.

Many street-sleepers do productive work. Some work informally, collecting waste for recycling, looking after cars, hawking goods or working as drivers or temporary labourers. But often these jobs bring in so little money that they have no choice but to sleep on the street.

Some people sleep rough to be near their place of work so that they can start early in the morning. Others are traders who need to keep a watch over their bulky goods which they can’t afford to transport in and out of the city each day, so they sleep in their trading stalls or at their regular pavement spot alongside their stock. Recyclers often spend their nights sorting and stockpiling their collections in preparation for selling the next day.

People may sleep rough for certain nights of the week or for sections of the month. But they have a more formal or better-quality home to go to, which is too far away and too costly or inconvenient to travel to every day.

Life on the street is particularly tough for women, because they face great dangers such as rape, abuse and trafficking. One study estimates that 40% of women living on the streets have their children with them, which makes them particularly vulnerable.

The word “homeless” is often used more broadly to describe people who have inadequate housing like shacks in informal settlements or warehouses and basements that provide little protection from the heat or cold.

Sleeping rough in the open or on public land is not easy. Street-sleepers are fined and harassed by authorities for contravening city by-laws that forbid sleeping overnight in a park or sorting and storing waste materials under a bridge.

Some rough-sleepers are attacked by criminals, and they face health problems caused by exposure to the weather and a lack of toilets and proper washing facilities.

In spite of this, people build relationships and networks that enable them to stay in a place with relative safety. Street-sleepers find ways to access the things they would normally have in an adequate home – lighting from the street, a socket to recharge a phone, clean water to drink or to wash with, a public toilet, Wi-Fi and technology, or a place to store their things.

They build their lives and hope their circumstances will change.

Chris Lund is CFO of Madulammoho Housing Association, a social housing company based in Hillbrow which provides low-cost rentals. Lund is also on the executive of JHN. He says we are in real trouble.

“There is a massive demand for low-cost accommodation and a desperate shortage of shelters. It is the responsibility of all government levels, from national to municipal, to provide housing.

“Over the past 23 years, close to four million houses have been delivered across the country to very poor households – an enormous achievement of our new democracy. But there is a massive backlog.

Lund thinks the lockdown in 2020 had both positives and negatives.

“Yes, it confirmed the lack of housing for the homeless and the poor, but it did result in renewed collaboration between the private/NGO sector and the public sector and a move towards better policy at both provincial and city level.”

But for other NGOs in the sector, the experience was different.

The Johannesburg Organisation of Services to the Homeless (JOSH) was established in 2013. Since then thousands of homeless people have had access to soup kitchens and other support services.

Mary Gillett-de Klerk, CEO and founder of JOSH, has felt the effect of the pandemic: “As more and more businesses close, people lose their jobs and thus their accommodation. I am getting daily calls from desperate Joburgers at their wits’ end as their worlds fall apart.”

She is also hugely frustrated. “Cyril Ramaphosa stated in his address to the nation that the homeless would be provided with temporary shelter,” she notes. As far back as April 2020, JOSH applied to lease eight vacant and disused city-owned properties where permanent shelters could be established. The process has just not moved forward and due to a lack of funding, JOSH may have to shut down.

It is impossible to provide everyone who needs it with a decent house in the short term, especially when so many people are unemployed. There are huge economic pressures on people who want to rent, but can’t keep up with payments, while at the same time developers also need profitable projects to stay in business.

Lund says developers, civil society and government together need to come up with a better plan to address homelessness more broadly. He describes a housing model that is like a ladder with different steps. It’s a model that needs to be implemented in both the inner city and the suburbs where homelessness is also widespread.

“At the bottom,” he says, “we need ablutions, mobile public showers and toilets placed in public parks in the suburbs and inner city.

“Then we need safe spaces for people who are sleeping rough with access to a mattress, ablutions, washing facilities and a locker.

“Next step, we need overnight shelters with access to a bed. R20 per night and you leave in the morning.

“We then need transitional housing options like shared rooms rentals, for people with irregular or very low incomes.

“Finally, social housing (self-contained units) and market rentals for people who have steady incomes above R7,500 a month.”

If these proposals were implemented, they might help the very poor and destitute navigate their lives with some dignity, humanity and hope. DM/MC

This story was updated and adapted from Vaya Untold Stories of Johannesburg published by Raith Foundation and RAINBIRD.

Harriet Perlman has worked in the field of entertainment and education, in film, television and publishing for more than 30 years. She has spearheaded numerous award -winning entertainment and education projects. She has experience as a writer for film and television, book editor, film producer, publisher and researcher. Harriet was a co-creator on Yizo YIzo and a producer at Soul City. She has worked on numerous communication and social justice campaigns including for Corruption Watch and Heartlines,. She co-produced and co-wrote a feature film called Vaya, with Rififi Pictures and edited the accompanying book, Vaya – untold stories of Johannesburg. Vaya was based on the lives of people in the Homeless Writers project which Harriet has run for the past 8 years. More recently she co-wrote and co-produced a documentary and book on black winemakers in South Africa. The Colour of Wine focused primarily on black women winemakers. Sarah Charlton is Associate Professor in the School of Architecture and Planning at Wits University. Her research focuses on low income housing policy and practice, state interventions in development, and people’s lived experiences of cities.