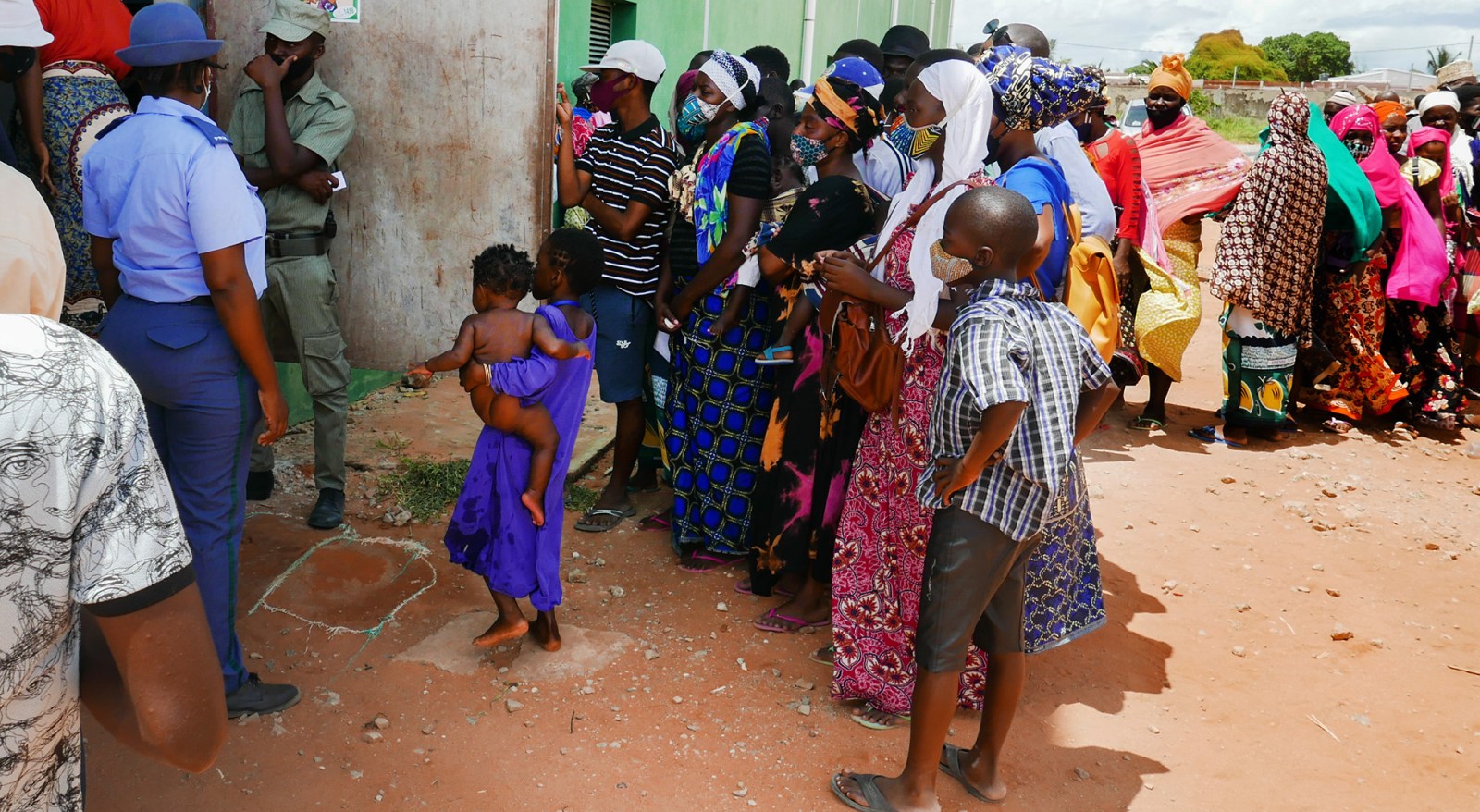 On 24 March 2021, insurgents commenced a sophisticated and bloody attack on the town of Palma, in the far north of Mozambique’s Cabo Delgado province. The attack lasted for five days, according to some reports, and has made world news.

Stories ricocheted around the world of how tourists and contractors at the Total liquefied natural gas (LNG) project took shelter at a nearby hotel; how some had made a disastrous dash for freedom, were ambushed and died before they were rescued. Horrendous as they are, these stories should also draw attention to a greater tragedy that affects millions of people in Mozambique’s poorest province.

One person who spoke to Maverick Citizen pointed out “most of the rescue missions focused on the foreigners, but what about the local communities?” That’s a good question given that, according to the Cabo Ligado Weekly, a report produced by the Armed Conflict Location and Data Event Project (ACLED) there have now been 1,341 fatalities from “civilian targeting” and a total of 2,689 deaths as a result of “organised violence” since the insurgency started in 2017. There are now an estimated 700,000 internally displaced people, a crisis which has humanitarian, regional and global security implications.

And the conflict is escalating.

But far from this being a simple story of Isis-inspired international “Islamic terrorism”, as is being given out by the Mozambican government and echoed in sections of the media, the conflict in Cabo Delgado is a story of what can happen in a developing country as the rule of law, with societal norms and values, break down in the face of prolonged state failure, corruption, human rights violations and alleged war crimes.

Human rights and the ‘forgotten cape’

To try to better understand the conflict, Maverick Citizen sought out the perspective of a leading civil society activist in Mozambique, as well as a report by Amnesty International titled “What I Saw Is Death”: War Crimes in Mozambique’s forgotten cape, released just weeks before the Palma attacks.

Professor Adriano Nuvunga is the director of the Centre for Democracy and Development (CDD); he is also the chairperson of a growing network of human rights defenders in Mozambique whose activities he has previously described in an article for Maverick Citizen. Nuvunga is part of a growing civil society which, although subject to a shrinking civic space and at times facing threats and murders, such as that of Anastacio Matavel which was linked to police death squads, Nuvunga says “has grown to a level that can’t be stopped”.

Nuvunga believes the Cabo Delgado conflict is the result of a decades-old “comrades arrangement” in the ruling party, Frelimo, concerning governance of the country, as well as the result of rampant corruption within the upper echelons of Frelimo, and of failures of “extractive governance” by multinational companies such as Total.

In an interview in Johannesburg last week, where he was attending a meeting of the Southern African Human Rights Defenders Network, Nuvunga talked about the role of each of these factors.

Since independence in 1975, Mozambique has had a troubled history. In the early 2000s it experienced an economic boom and for a few years it was the “poster child” of the development community. However, those days are gone. Nuvunga dates the new curse of violence to deepening inequality following the discovery of enormous gas reserves off the northern coast of Mozambique in 2010.

The subsequent gas rush has led to a frenzy of “elite-centric extractivism”, a $2-billion corruption scandal implicating the former finance minister as well as the son of former president Armando Guebuza. Recently, even Mozambican President Filipe Nyusi has been implicated in court documents. The gas rush has exacerbated already deep inequalities between Mozambique’s northern and southern provinces.

Cabo Delgado was a stronghold for Frelimo during the liberation struggle. It should be a paradise and a centre of wealth generation and development. It is rich in minerals, rubies, timber, fisheries, tourism and marijuana — “enough to make it a middle-income country if the wealth wasn’t washed away by corruption”.

It also has a significant illicit economy, involving China, which Nuvunga feels is a factor in the conflict.

However, despite its riches, Cabo Delgado is Mozambique’s poorest and most marginalised province. Its wealth has been extracted by local and international elites with little of it reaching the people who live there. In the words of veteran journalist Joseph Hanlon:

“In Cabo Delgado, the grievance is marginalisation and growing poverty and inequality as Frelimo oligarchs and the mining and gas companies do not share the wealth.”

(Sounds just like the cartels operating in Zimbabwe recently exposed by Maverick Citizen).

Added to this, the $2-billion secret debt scandal which exposed the Maputo elite has led to drastic cuts in foreign aid, taking a heavy toll on the poor.

In recent years the province has also been battered by climate crisis-linked cyclones Idai and Kenneth which have disrupted livelihoods and displaced millions of people.

Nuvunga links some of Cabo Delgado’s economic marginalisation to what he calls a “comrades’ agreement”, by which the leadership of Frelimo and thus the country is rotated between leaders of the south and north. It was this that placed Mozambique’s President Filipe Nysui, from the Makonde ethnic group, in power, following decades of leadership by Joaquim Chissano (1986-2005) and then Guebeza (2005-2015).

However, although Guebuza hails from the northern Nampula province, the marginalisation of the north continued under his presidency, as it has under Nyusi, who many see as a weak and captured leader.

“How far is Nyusi his own man?” asked one person we spoke to, hinting at the capture of Mozambique’s political leaders by economic and criminal interests (again, a situation similar to that we have recently reported on in Zimbabwe).

As a result of all these factors, the insurgency which started in October 2017, has developed unhindered. Although taking the name al-Shabaab, with its associations with Islamic extremism, commentators agree that in essence it is a youth uprising that is taking on an increasingly violent, extremist form.

However, they differ on what they think is its core.

Nuvunga believes it is an inchoate response “to the political economy of resource extraction” and that — at this stage — it is not about establishing a Salafi caliphate. Piers Pigou, a senior consultant for the International Crisis Group in southern Africa, however, believes that while it may not be a “jihadist organisation”, and while its links with Isis are opportunistic, it is a radical Islamist scion that started as a split of discontented, alienated youth from the mainstream religious authorities in the province.

“Since then it has grown into a well organised militia unit”, he says, potentially numbering several thousand. It relies on terror, notoriously beheadings, but its cause has been aided by poverty, inequality and the brutal, indiscriminate response of the Mozambican Defence Force that has used torture and terror, extrajudicial killings and the suppression of the media.

This supports criticism that the Mozambique government’s response to a social crisis has been a purely military one, involving suppression of fundamental rights.

Only belatedly (and perhaps too late) has it included a developmental angle, reflected in the creation of the Agency for Integrated Development of the North in 2020, with the support of the World Bank and its involvement in a multi-stakeholder Platform for Dialogue on Business, Human Rights and Security in Cabo Delgado.

In Palma, it became obvious that the military strategy is not working. In Part Two we explore the prospects for a negotiated settlement. DM/MC