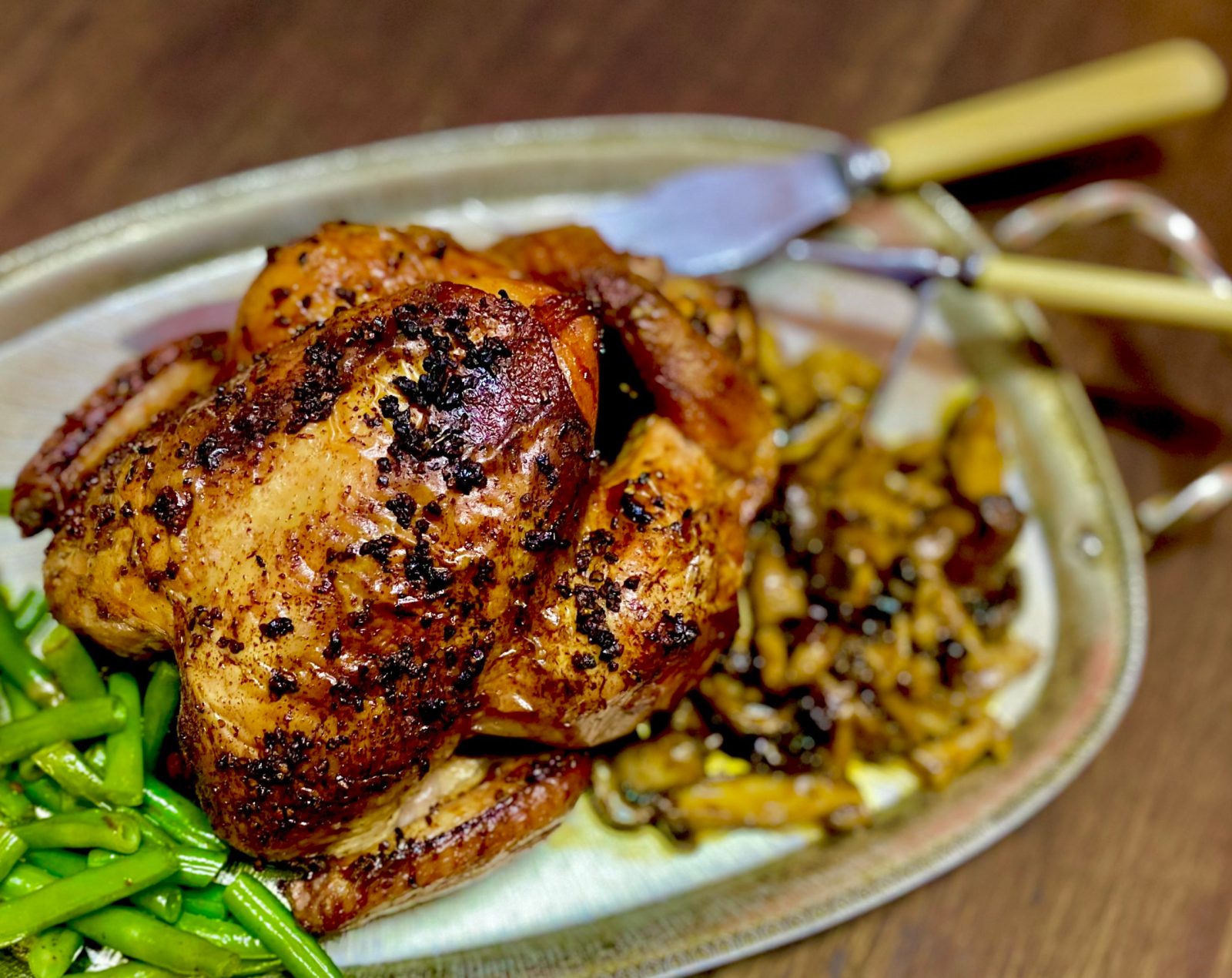 The difference between a shop-bought chicken and one that is pasture raised became immediately apparent when I roasted a beautiful chicken this weekend.

The chicken was plump and gleaming. It had come to me via the friend of a friend, who has found a way of putting a limited amount of land to big use, hand raising chickens from egg to market. It was simply the best roasted chicken I’ve eaten in many moons. It was even presented beautifully, in a way and of a standard that brought to mind the way a bird or joint of meat would be presented in a classy speciality store.

I write “I’ve eaten” advisedly, for a roast chicken version of the Braai Monster was heard to stalk the kitchen later that night. Ever since she was a little girl my daughter has spoken of the Braai Monster: the shuffling sounds she would hear late at night, followed by chomping and grunting sounds in the kitchen. It may or may not have been her dad having a midnight snack of whatever was left over. So it was that the Roast Chicken Monster was heard in our kitchen on Saturday night, laying waste to every last morsel on the carcass of what had once been a beautiful, preening chicken. I must have slept through it, for I heard nothing.

Were it not for the requirements of publishing a daily recipe, I might have roasted it with rosemary, or thyme, or any one of the myriad ways I’ve roasted a chuck. But it needed to be different, needed a story to tell, so I decided to r0ast it with soy sauce, a little sesame oil, and garlic.

Only, I was out of fresh garlic, which is a very rare event in our household. Once I had recovered from the shock and the sal volatile had been put away, I remembered that I had garlic flakes, and that they have a charm all of their own. Garlic flakes, when sprinkled on something, anything, and baked or roasted, turn a delicious nutty brown and add a lovely pop of flavour. Which they duly did to the chicken skin. Yes, they do blacken a bit. It matters not: that same blackening gives a lovely charred flavour to the outside of your bird, and there’s nothing wrong with that.

Michael Rice’s chickens live a good life with lots of play time in the freedom of nature, munching on lucerne. (“The chicken,” as my mate said, “has had exercise.”) That makes his birds, and those of others who raise chickens in the pasture, far preferable to the battery mis-raised chickens we buy at the supermarket. It’s a new venture for him, and the portents are good. For one, the bird (after 90 minutes of roasting) was beautifully browned, with crisp skin, but the real test was to come when I cut into the meat.

That the chicken “has had exercise” means that it could be tougher, potentially, than your average bird. But. Two things: it was cooked down to the bone, with no pink showing whatsoever; and the flesh was succulent, juicy, and not at all dry. Though it had taken the added flavourings well, the intrinsic taste of the chicken was still there to be enjoyed. I will add Michael Rice’s contact number at the end of the story for anyone who would like to enquire about doing business with him. Here’s the recipe…

Dash of sesame oil, not too much

Clean the bird and pat dry with kitchen paper. Season the cavity with salt and pepper. Use slim fingers to prise the breast skin away at both ends to make pockets, being careful not to tear the skin.

In a small bowl, mix the soy sauce, sesame oil and garlic flakes. Spoon a little of this under the skin at both ends and massage the skin to spread it around.

Season the bird on all sides with salt (yes, soy is salty, but a chicken needs generous salting). Drizzle peanut oil all over the skin.

Roast in a preheated oven at 240℃ for 30 minutes, uncovered, then turn the heat down to 200℃ and continue roasting until, when pricked through the breast to the bone with a slim skewer, the juices run colourless. Give it 15 minutes to rest in the turned off oven with the door ajar.

I served it with a mix of Oriental mushrooms stir fried in black bean sauce, and blanched green beans tossed in butter and seasoned. DM/TGIFood