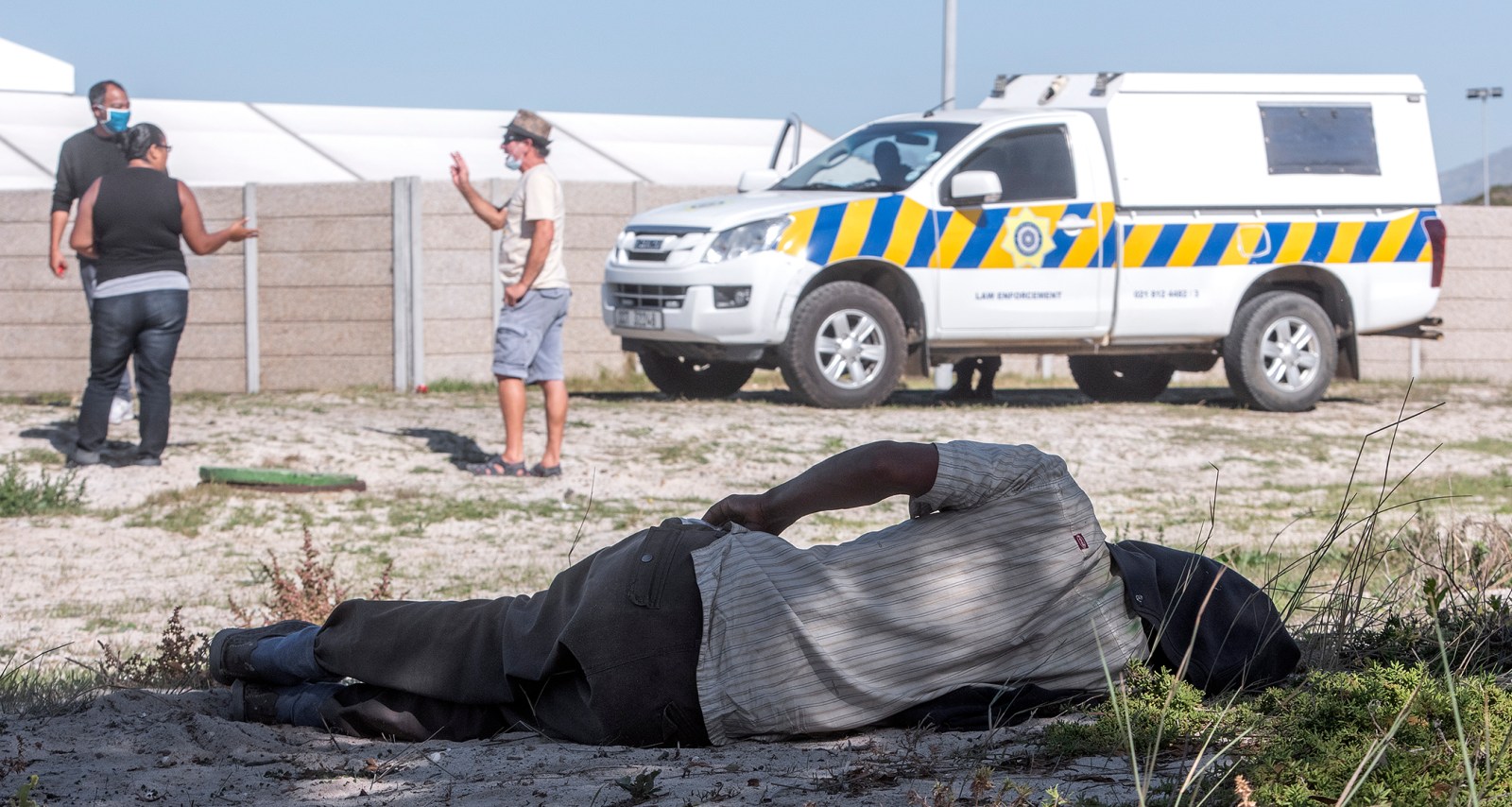 A general view of displaced people leaving Strandfontein shelter on April 30, 2020 in Cape Town, South Africa. Is it reported that Strandfontein camp for homeless people erected by the City of Cape Town will be closed down. (Photo: Gallo Images/Brenton Geach)

This week, Judge Siraj Desai made a costs order against the City of Cape Town in its case against the South African Human Rights Commission (SAHRC) and 10 monitors. The commission and monitors feel that justice has prevailed. The city, meanwhile, has responded that it is considering its options.

A Western Cape High Court judgment on Wednesday, 17 March 2021 finalised a protracted litigation process emanating from the Strandfontein Camp, which housed 2,000 homeless people at the start of the Covid-19 pandemic.

In 2020, the matter ended up in the Western Cape High Court after the City of Cape Town refused SAHRC commissioner Chris Nissen and human rights monitors access to the Strandfontein camp.

The SAHRC then brought out a damning report of human rights abuses, to which the City objected. In response, it sought to interdict the commission.

The City argued that the SAHRC and its monitors were “rebellious”, intimidating and disseminating false information, It also said the SAHRC did not have the power to appoint independent monitors.

Following the report, the Western Cape High Court granted an interdict preventing the SAHRC and its monitors from entering the camp site.

However, due to the site being decommissioned on 20 May 2020, the City argued that the matter was moot and should thus be withdrawn. The interdict was not made a final order and in June 2020 the only outstanding contentious matter was the cost order.

But the judgment delivered by Desai on Wednesday effectively nullified the interdict and compelled the City to pay the cost for the hearing.

One of the 10 monitors, Tauriq Jenkins said: “The judgment is a vindication for the SAHRC and upholds the dignity and constitutionality of an important Chapter 9 institution as well as giving credence and protection to human rights defenders in our country.

“After months being subjected to vitriolic ill-truths and defamatory propaganda by the City against the SAHRC and its monitors, justice and truth prevails.”

Jenkins said the decision “ought to instil a sense of humility in a City which had lost its moral compass in certain ways”.

In his judgment, Judge Desai noted that the monitors were appointed to observe the conditions under which people were living and investigate allegations of human rights abuses.

Judge Desai said the fracas involving the City and SAHRC that followed was compounded by the City’s decision to seek relief in the Western Cape High Court. He said this had “severely impinged upon the constitutional and statutory functions of the SAHRC”.

“When the matter finally came before me the matter was ripe for hearing. Suddenly, and without prior notice to this court, advocate Renata Williams, SC, appearing for the applicant, indicated that she was withdrawing the application,” said Judge Desai.

When he asked Williams during the virtual proceedings whether she was abandoning the application, Williams replied that she was withdrawing but not abandoning it, and refused to tender costs.

This gave rise to the argument on the cost only. Judge Desai reiterated that Williams failed to advance any cogent response to the suggestion that the sudden withdrawal of the matter should result in the City being saddled with the costs.

“Regrettably, the City, a municipality, elected to litigate against a Chapter 9 institution. More appalling is the disdain with which the applicant regards the SAHRC.

“Advocate Norman Arendse correctly pointed out the orders sought by the City were overbroad and they failed to demonstrate why this is one of the clear cases in which such orders should be granted,” Judge Desai said.

The allegations of incitement or rebellion and intimidation levelled by the City against the SAHRC monitors, he said, were vague and not borne out by the actual evidence, nor did they establish the respondents’ complicity in such conduct.

“Probably of greater significance in this matter is this gagging interdict sought by the City. It sought to gag the respondents from independently reporting on what was occurring at Strandfontein. It sought relief. It wanted to interdict the publication and dissemination of reports relating to Strandfontein which were untrue or had not been presented to the City for comment before publication or dissemination.

“The City has no right, or whether clear or even prima facie, to such interdictory relief. Everyone is at liberty to publish whatever they wish as long as they do not contravene the law or infringe upon constitutional rights. The City has no right to prevent such publication and our courts have repeatedly refused to muzzle criticism of organs of state providing public services.”

Judge Desai stressed that an interdict against publication constitutes a “prior restraint” on expression, adding our courts have repeatedly held that it “should only be ordered where there is a substantial risk of grave injustice”.

Faced with several insurmountable hurdles, Williams, or her client, “wisely and quite properly, elected not to pursue the application albeit on the doorsteps of the court”.

“Regrettably, that wisdom did not extend to conceding cost”, Judge Desai pointed out.

In a statement following the judgment, the City noted: “Unfortunately,  known political opportunists were deployed by SAHRC provincial commissioner Nissen to play politics and tell outright lies about South Africa’s biggest effort to help people living on the street.

“Mr Nissen was unable to put politics aside, and formally acknowledge, like the national government did, the major effort that went into caring for people living on the street in compliance with regulations. We further note their almost exclusive focus on Cape Town and not elsewhere in South Africa.”

The statement further reads: “The fact remains it was necessary to protect our staff from harassment and our operations from disruption by so-called ‘monitors’ who behaved instead like political hooligans.

“We were relieved at being granted the interim relief, which kept ‘monitors’ from blocking entrances and harassing staff. The interim relief had the necessary effect and enabled the City to complete its work without interference.”

The City added that by the time that the court allocated the hearing date for a final order, there was no need to decide the final relief as the matter had become moot.

The City stated that it had been informed late on Tuesday night, 16 March, that Judge Desai would be handing judgment the following morning – almost a year later.

“The City does not necessarily agree with Judge Desai’s cost ruling and will consider its options once a written judgment is made available by the court,” the statement reads.

In response, the SAHRC said in a statement it viewed the city’s statement as a flagrant disregard of the judgment, and an attack on the SAHRC and Nissen. It too was considering its options. “The commission finds it disturbing that in the wake of a judgment affirming the constitutional powers of the commission and the rights of the most vulnerable, being the homeless that the City of Cape Town would choose to issue such a statement.” MC/DM.