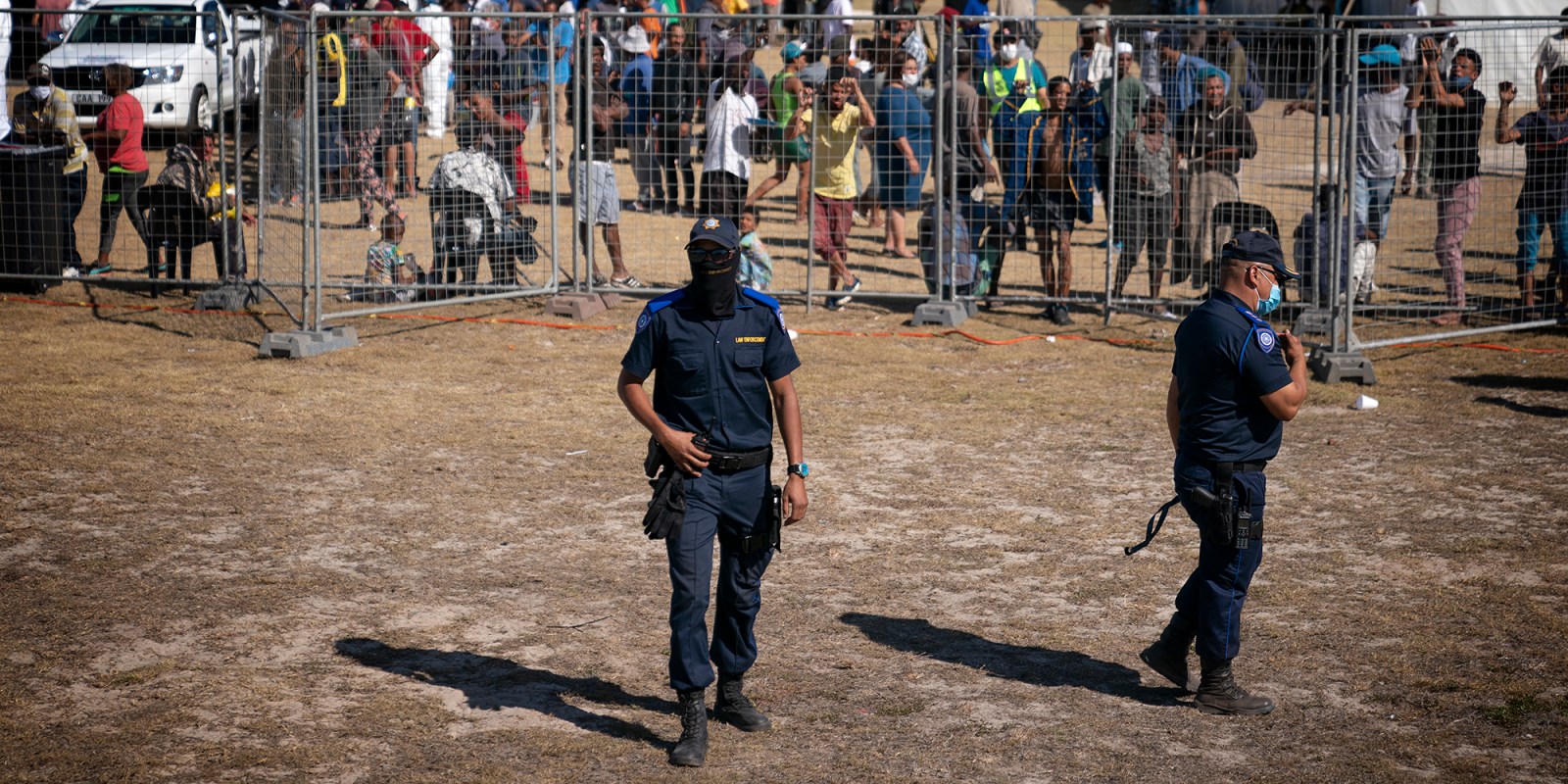 A leaked report, uncertainty over roles, ‘political opportunism’ and the lifting of the lockdown came up on Thursday as the Strandfontein homeless relocation camp once again crept into the spotlight.

On Thursday 30 April, issues regarding the Strandfontein relocation camp came out in two different governance spheres: in the City of Cape Town and within the legislature.

One side is the ugly, public spat between the City and various political parties. On the other side, civil society is calling for the site to either be closed or for proper hygiene measures to be put in place. And in the middle are homeless people who have nowhere else to go after being dumped there when the lockdown started 35 days ago.

In the Western Cape legislature, the ad hoc Covid-19 oversight committee on Thursday afternoon held a briefing with the Department of Social Development and the South African Police Service (SAPS) about vulnerable groups – the elderly, those in shelters, children and victims of gender-based violence. While police said 1,891 domestic violence-related cases had been reported and a further 2,928 domestic violence-related complaints laid, much of the focus was on the Strandfontein homeless camp.

The camp, which was started as a temporary homeless shelter as required under the Disaster Management Act, has been in the public domain since it started operating on 5 April. There have been allegations of mistreatment at the camp through limited food and limited social distancing. Then there was the blocking of media and opposition members of both the City of Cape Town and the Western Cape legislature. When the oversight committee convened its first meeting earlier in April, it was agreed that the camp was to be discussed.

On Thursday, 30 April, it was discussed.

In the legislature, Dr Robert McDonald, head of the provincial Department of Social Development, said there were 6,681 homeless people accommodated in shelters, including the Strandfontein temporary shelter.

When questioned by members of the legislature about the camp, McDonald said there was still confusion in regulations about who exactly is responsible for specific roles within these camps and stated, “so, with that lack of detail, there’s quite a bit of uncertainty about what is required in those spaces”.

He said: “Those shelters are temporary in nature so they are certainly not ideally kitted out for a long-term stay and I think that the longer the people are staying there in these shelters, the more difficult it’s becoming, but our social workers have been visiting the Strandfontein site and other sites periodically.”

Eight hundred people who are currently staying at the camp have said they want to remain there, and “several hundred have indicated they want to leave to be reunified with their families,” McDonald told the committee.

But ANC member of the legislature Rachel Windvogel, along with other members of her party, who on previous occasions had been denied access to the site, asked what MEC Sharna Fernandez thought of the site, as “she is the protector of the vulnerable people”.

GOOD’s Brett Herron, a vocal opponent of the site, said he was frustrated at what was happening, especially after it emerged that some of the people in the camp had tried to leave on Thursday morning.

“The gates are opening as we speak… we don’t have a clear answer from the department on where they’re going,” he said.

Fernandez replied that, “the situation was not ideal. It was imposed on provinces by a national declaration and I was in a [meeting] with all the MECs and we all agree that the situation is not ideal”. The MEC confirmed her department was providing psychosocial support to the people in the camp, “so we haven’t just stood back”.

McDonald said that questions over the next steps of the site should be referred to the City of Cape Town as it was in charge of the site.

While the committee was discussing the situation, the City of Cape Town confirmed that the site would be closed soon. In a statement released on Thursday afternoon, the City lambasted a report by the South African Human Rights Commission (SAHRC). Mayor Dan Plato said he was “taken aback by the shocking falsehoods contained in a report by some members of the SAHRC Advisory Committee which has been released directly to media”.

In a letter released by Plato’s office, he informed SAHRC Commissioner Chris Nissen, “In particular, my concern relates to the reckless circulation of reports containing false and distorted information about the Strandfontein Temporary Emergency Shelter for the homeless. This is despite my office having not received any official SAHRC report on the matter to date.

“I am taken aback by the shocking falsehoods contained in a report by some members of the Advisory Committee which has been released directly to media. This report is now being misconstrued as the official comment of the Commission, seemingly with no public correction forthcoming from the SAHRC.”

In the scathing SAHRC report, it is recommended that the camp be closed down for what the preface called a “gross violation of national and international human rights”. The report stated some alarming findings: around 80% of the people who have been moved there lack proper medical care between 4pm and 8am, there were safety concerns for women, who in some cases had to share tents with men, inadequate toilet facilities, and one group calling for a separate tent for the LBTQI community within the camp.

When this article was published, City of Cape Town mayoral spokesperson Greg Wagner said Daily Maverick would be provided with a response by midday on Wednesday, but by Thursday we had not yet received it.

In Plato’s letter, he refutes some of the claims addressed in the report.

The mayor told Nissen: “a series of false claims about services at the facility that are, at best, outdated and related to early set-up challenges experienced in all metros, and at worst, outright deliberate distortions of the true standard of care at the facility. Misrepresentation of the standard of medical care at the facility, whereas over 800 homeless people have benefited from the diagnosis of chronic conditions, such as diabetes or hypertension, that would otherwise have gone unchecked on the streets. These individuals are now enrolled for chronic medication.”

Addressing political parties, Plato said, “Cape Town’s visible services to the homeless have clearly led to greater scrutiny on us, and unprecedented levels of attacks from certain political and related groups. Thankfully, for every political point scorer there have been 10 helping hands.”

The City has previously accused the ANC and other opposition parties of point-scoring for raising issues about the camp.

Speaking to Daily Maverick, Nissen said the report had been leaked as he had only sent a copy to Plato and to Safety and Security Executive Director Richard Bosman. He maintains he does not know how the report was made public. He said, however, the report was an independent assessment of the site and the commission had not yet decided whether to investigate this matter.

While there is uncertainty about what happens next, Nissen said what is needed is a “sustainable, developmental programme for those who are displaced”.