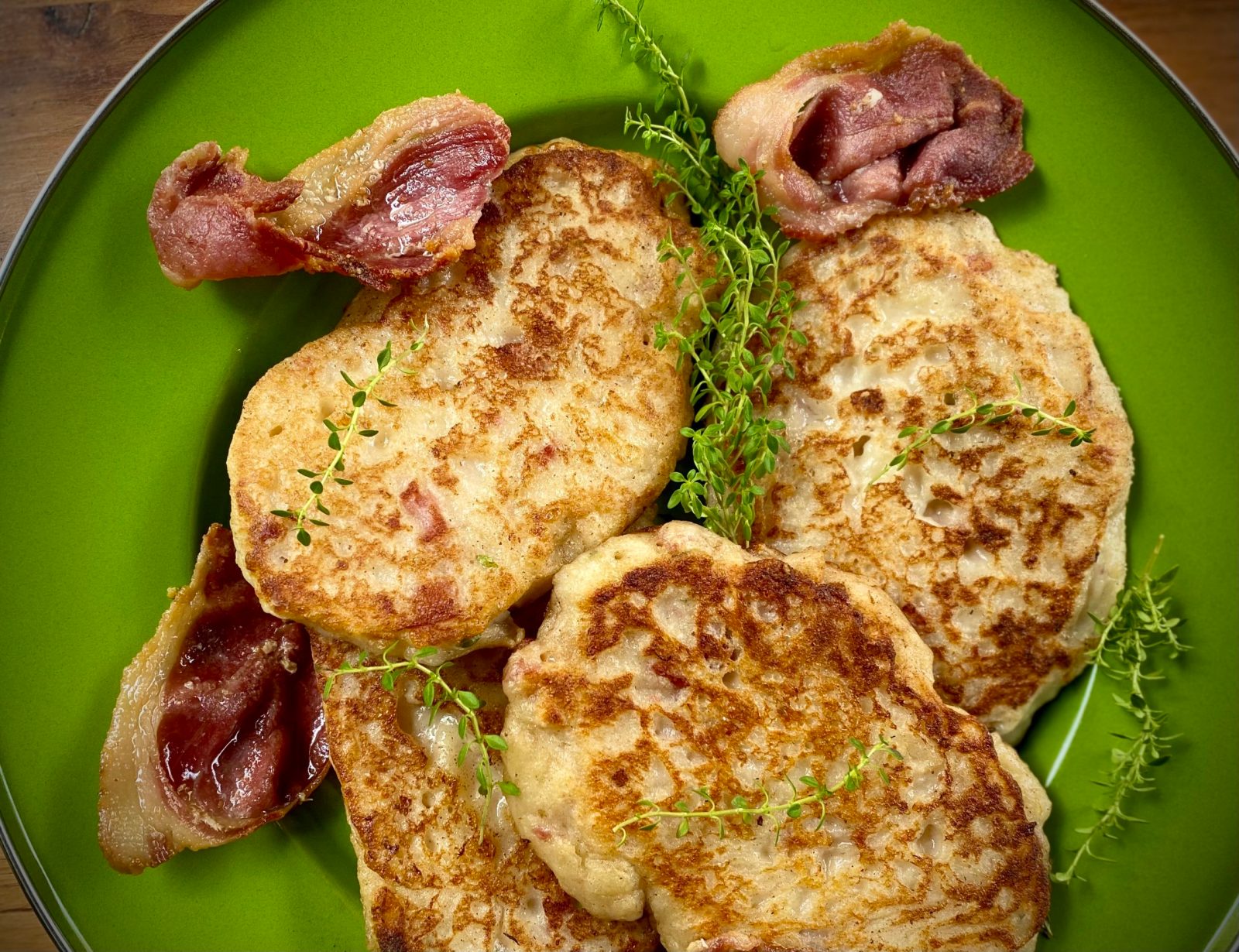 Boxty is a traditional Irish potato cake. My recipe is not quite traditional because I added cooked crispy bacon bits to the mix, and this being Patrick’s Day I felt it needed something green, so I added thyme. Because everything improves with thyme. And bacon.

They’re called simply “boxty”, sometimes boxty cakes. I call these “bacon boxty” after I had browsed many recipes and found a couple that said boxty cakes sometimes have other ingredients such as bacon or herbs added to them. I grabbed that piece of information like a drowning man who’s been thrown a lifeline, because they strike me as needing more than only salt. Still, what does a South African Yorkshireman know. Eejit! (Why do I hear a chorus of that?)

Boxty cakes are usually cooked a ladleful at a time (say, three to a large frying pan) although some contemporary recipes call for it to be cooked in one piece, as it were, filling an entire frying pan, like rösti.

The only seasoning in many cases is salt, but at the risk of never being allowed in an Irish pub again I gulped down a quick double shot of Paddy’s Irish whiskey and threw in some picked thyme leaves and some tiny bits of super crisp bacon. Actually, there’s another faux pas back there; though nearly everyone calls it “Paddy’s” it is in fact Paddy Irish whiskey. Honestly, some chopped onion in there surely would not harm, but now I’m really taking my life into my own hands.

Happy St Patrick’s day, everyone. Wear something green and rustle this up for brunch, lunch or dinner. Raise a glass tonight to all the Irish who have had to stay at home today, making boxty and colcannon, when they really wanted to go down the pub.

As you can see from the above ingredients list, you need to judge the runniness and thickness of the batter yourself, and adjust the quantities of flour and milk accordingly. Just do use all of the potato.

Peel all the potatoes. Halve three of them and bring them to the boil in plenty of salted water. Cook until they are very soft.

While they’re cooking, grate the other three potatoes. Place them in a colander and squeeze down to force out the water they contain; or squeeze in a muslin bag. Put the grated potato in a big bowl.

Mash the potatoes and spoon it into the bowl with the grated spuds.

Add the flour and combine with a wooden spoon.

Add the milk a little at a time, stirring to combine, then the remainder until it is mostly used up. But stop adding milk before it becomes too runny (I stopped at about 700 ml). It needs to be of a just-pourable consistency, not a gushing river.

Fry some bacon until crisp and crumbly, chop it up and stir it in.

Pick some thyme leaves and stir them in.

Salt it well, and stir again.

Melt butter and heat with a little oil in a hot frying pan. Use a ladleful for each boxty cake. Fry two or three at a time over a moderate-to-low heat, so that it cooks through to the centre without the outsides becoming burnt. Turn once. They need to be golden on both sides. Place on kitchen paper to mop up the fat, and serve. DM/TGIFood