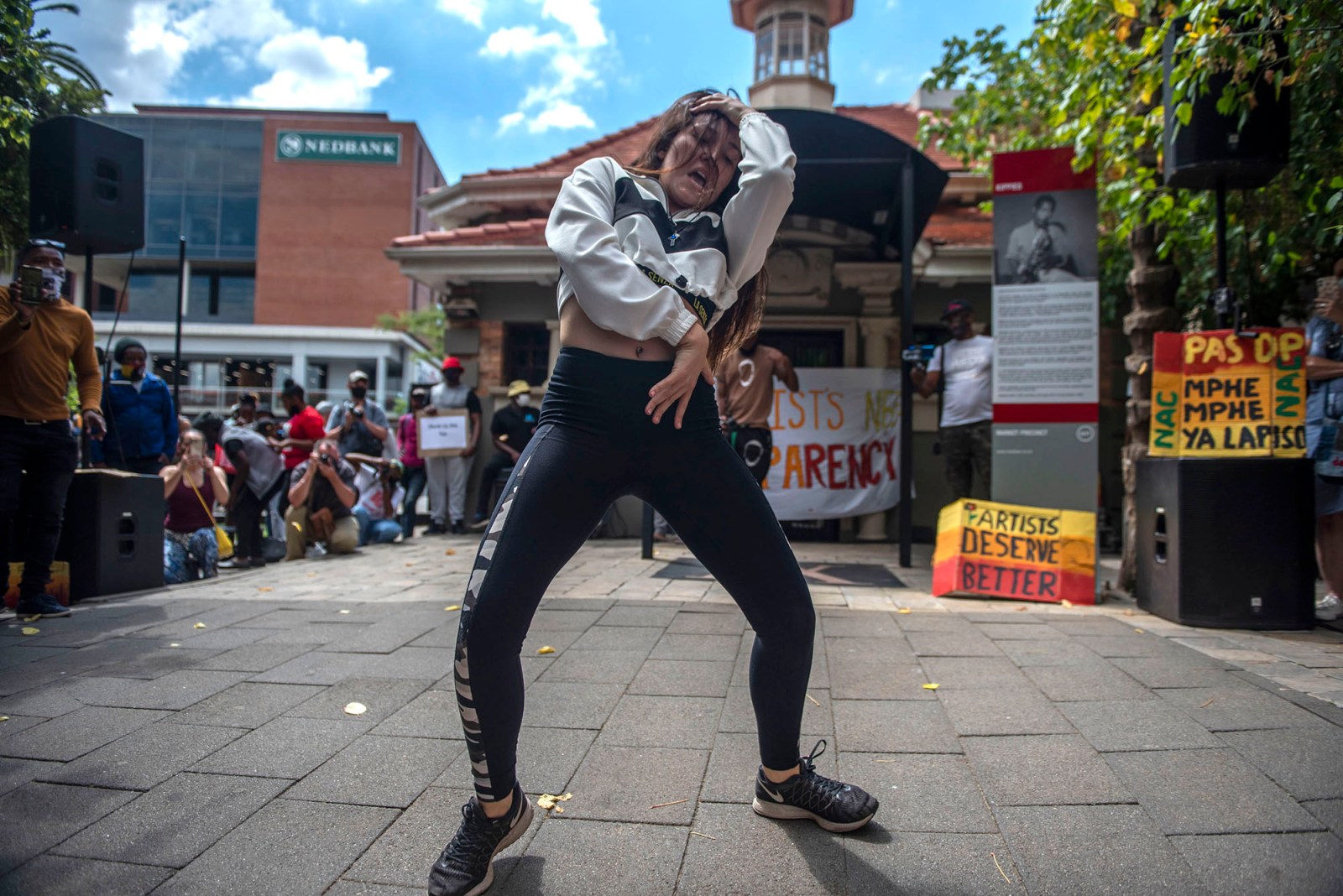 Dancers perform in front of the National Arts Council in Newtown to show solidarity with several artists who have been participating in a sit-in at the council. (Photo: Alet Pretorius)

It’s been two weeks since a group of artists staged a sit-in at the National Arts Council offices in Johannesburg. Now, artists from Bloemfontein and Kimberley have staged their own protests in solidarity and to highlight the challenges facing the industry in their respective provinces.

Tuesday, 16 March, marks 14 days since artists started a sit-in at the National Arts Council (NAC) offices in Newtown, Johannesburg. Artists in other towns such as Bloemfontein and Kimberley have now begun staging their own protests.

In Bloemfontein, about 40 artists staged a sit-in at the Performing Arts Centre of the Free State (Pacofs) on Monday last week, partly in solidarity with the artists in the NAC offices, but to also hold Pacofs accountable.

“In 2018 they commissioned a report that recommended policies that should be put in place to prevent wasteful expenditure and how to deal with conflicts of interest among board members. They say they’ve implemented the report, but they don’t tell us how,” said Mbuyiselo Nqodi, a theatre practitioner.

Nqodi said they were also acting in solidarity with artists in  Johannesburg, who had been approved to receive R100,000 from the NAC but had not yet got the money.

“We’re passionate about this sector and we want to hold them accountable. If they don’t give us satisfactory answers, we’re not going to move,” said Nqodi.

Pacofs did not respond to queries.

On Monday, 15 March, a group of 23 artists in the Northern Cape staged a sit-in as well as a hunger strike at the offices of Desery Fienies, the Northern Cape’s MEC for sports, arts and culture.

“We’re doing this because the issue of the arts and culture sector in the Northern Cape is a longstanding one,” said Thabo Motlhabi, a theatre practitioner.

“We’re here in solidarity with our comrades in Johannesburg but to also address our own local challenges in the arts sector. There are often many commitments, but rarely implementation when it comes to us,” said Motlhabi.

Motlhabi said that they were only willing to leave Fienies’ office once there was a plan to address their demands.

“We also want the rot at the NAC to be addressed. We know that whenever we need to apply at the NAC, two or three individuals in the [Northern Cape] province will get that funding,” said Motlhabi.

“However, due to budget cuts that were imposed on the department, only R1-million is available from the R4-million [which was] used for social relief for the artists.

“We are in consultation with the provincial treasury with regard to the current situation, to see if there are funds available that can be channelled to the department,” said Fortune.

As far as meeting the artists’ demands goes, Fortune said: “The current status of affairs is that our offices are still occupied and we will continuously engage with them on the matter, but as it stands there are no funds available to meet their demands.”

Back in Johannesburg, the Newtown collective is staging performances outside the NAC offices throughout the week. On Monday, it was the dance sector, and on Tuesday afternoon, the Soweto Spiritual Singers performed.

Meanwhile, the collective is still calling for the NAC board to step down. DM