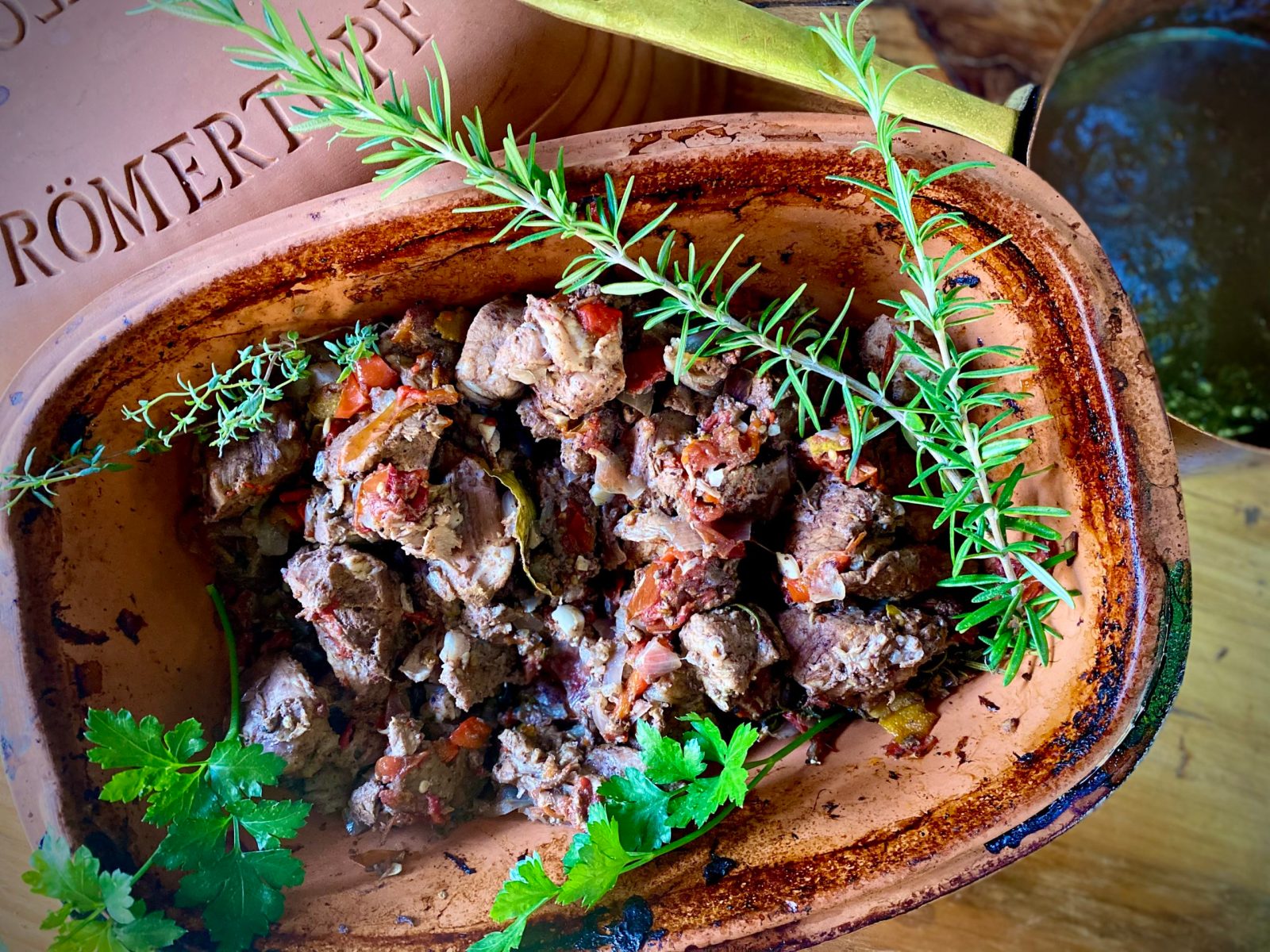 Clay pot cooking is as old as time, or at least as old as the time when humans learnt how to make fire and then began to fashion vessels for cooking their food in. In the Seventies and Eighties, clay pot cooking was all about the Römertopf.

This week’s throwback food memory is not so much the recipe as the vessel it is cooked in. In 1967 a German company launched a clay pot under the Römertopf (“Roman pot”) brand at the Hanover World’s Fair. It soon moved into the greater world and throughout the Seventies and Eighties many households owned “a Römertopf”, as it was generally called; and it’s a sure sign that marketing has paid off when the brand, like Hoover, becomes the name the item is known by.

“Let’s cook it in the Römertopf” was a common refrain and often would be said when the speaker was brandishing a whole chicken as if to say, “what shall we do with this?”. A chicken “roasted” in a Römertopf was a special thing indeed, even though roasting as such had nothing to do with it. For one thing, it has a close fitting lid, and there was never any point in cooking anything in it with the lid off.

This is the thing about a Römertopf: you don’t need any fats other than what is already in the meat you’re cooking. It cooks using steam (hence your need to keep the lid on throughout the cooking period), and this is created by the first stage of using a Römertopf, which happens before you even put it in the oven. It has to be completely submerged in cold water for half an hour or so before it is used, every time. Then you dry it, and place inside it everything you want to cook in it. The lid (which has also been soaked) is put on, trapping everything inside including the water that has soaked into the very bones of the pot, as it were, which is released into the pot by the application of heat.

If using onions, for instance, there’s no need to simmer them first (and even if you did, you wouldn’t do it in the clay pot either, it would need to be cooked in another pot and then added).

The clay pot, with its contents and the lid on, then goes into a cold oven, which is then turned on to the desired heat, but don’t make it too high because this deserves a little time and patience on the cook’s part. Like the best things in life, a Römertopf meal is worth waiting for.

Sorcery and magic conspire in that private world inside the pot while it’s cooking, and the aromas that ensue when you remove the lid will have everyone in the house heading for the kitchen.

In a nutshell, the Römertopf brings to the conventional modern oven a way of cooking as old as the art of cooking itself.

The result of cooking a whole chicken in a Römertopf in the oven? Just superb. So deeply flavourful, the meat so succulent that every bit falls away from bone and sinew. It’s one of the marvels of slow cooking, how the vessel imparts a flavour and quality to its contents, almost miraculously. A tandoor has a similar effect. As does the tagine of North Africa and the daubière of Provence, the latter being most often used for lamb dishes known as a “daube”. And as does, in our neck of the woods, a potjie, even if it is not clay but cast-iron. In all cases, the contents take on a particular character because of the vessels they have been cooked in.

Casting around for recipes to cook in my Römertopf, which I confess had been lying forgotten in a cupboard for years and needed a thorough clean, I read a few recipes for Provençal daubes and Mexican dishes cooked in their version of a clay pot, known as a cazuela; with a foray to Basque country where capsicum/bell peppers and lovely ripe tomatoes are favoured.

I don’t remember cooking anything other than chicken in a Römertopf during all those years of the pot actually being used, but I had a gees to use lamb this time, and the resultant recipe that I wrote down, before starting to cook, was for cubed lamb leg with lots of tomatoes, orange, white wine, red bell peppers, herbs, allspice and red onion. It was a great success, the Basque influence held sway, and here’s how it went…

1 leg of lamb, deboned, the meat cubed (keep the bones to make stock)

2 oranges: juice of both, the grated zest of 1, the peel of the other

A bouquet garni of rosemary, parsley and thyme sprigs, tied with kitchen string

Dig out your old Römertopf and give it a good wash.

Immerse the clean Römertopf in cold water in the sink and leave for half an hour.

Place the chopped onion at the bottom of the pot with the garlic, peppers, bouquet garni, bay leaves, tomatoes, orange peel and zest, orange juice, and white wine. Sprinkle ground allspice over or add whole allspice. Season with salt and pepper. Stir, then add cubed lamb and stir to coat.

Remove Römertopf from the oven and use a ladle to spoon off almost all of the remaining liquid to a saucepan. Cover the clay pot and put back in the oven, on the lowest heat, to keep it warm.

Reduce the juices down by half on a high heat on the stove top.

Add the cornflour, which has first been stirred into cold milk or water, and stir the sauce until it thickens. Pour the sauce back into the clay pot, stir and serve with couscous or rice. Make a mental note to get the old Römertopf out more often. You could of course make this dish in a clay tagine or other style of clay cooking pot. DM/TGIFood